Healthy food is great for your body, but it can sound pretty boring. Vegetables and fruit, quinoa and sweet potatoes, fish and almonds, green tea and olive oil — all of these ingredients can help you live a longer, healthier life. But on their own, they don’t sound exciting. And they probably don’t make you feel particularly adventurous in the kitchen. Fortunately, you can turn to food trends — and not just the kind celebrities started — for exciting new health foods that will add new flavors to your diet.

Get the scoop on a variety of new health food trends that have recently burst onto the scene. Worried about whether fermented foods or savory yogurts are actually a good idea? Consumer Reports ran each food trend by nutrition experts. So you already have the go-ahead to add these foods to your grocery list. 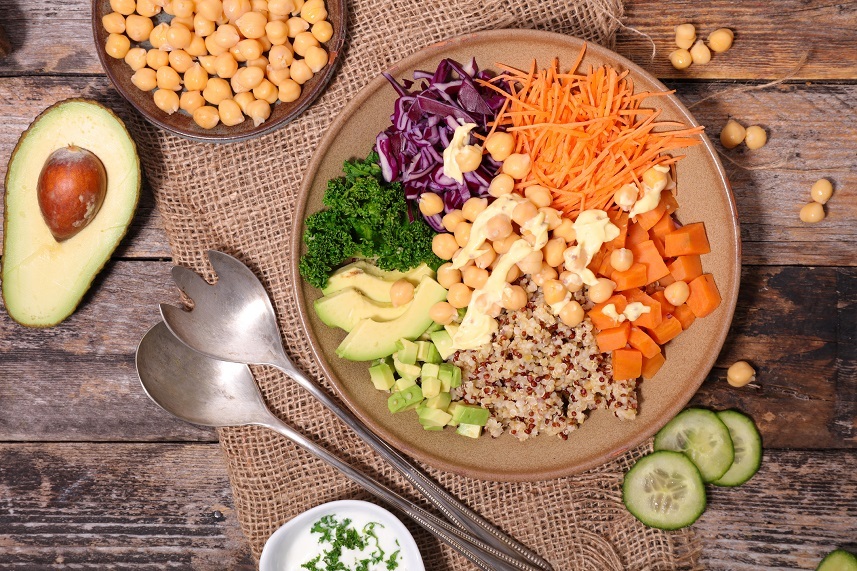 When scrolling through Instagram, you’ve probably spotted shots of bowls that include veggies, whole grains, and protein. Those are the basic building blocks of a power bowl, which puts everything you need in a meal in a single bowl. Consumer Reports explains, “Bowl foods are on tap to be popular again this year, and you can expect to see more of them on restaurant menus and in supermarket freezer cases. But they’re only as healthy as the ingredients they contain.” 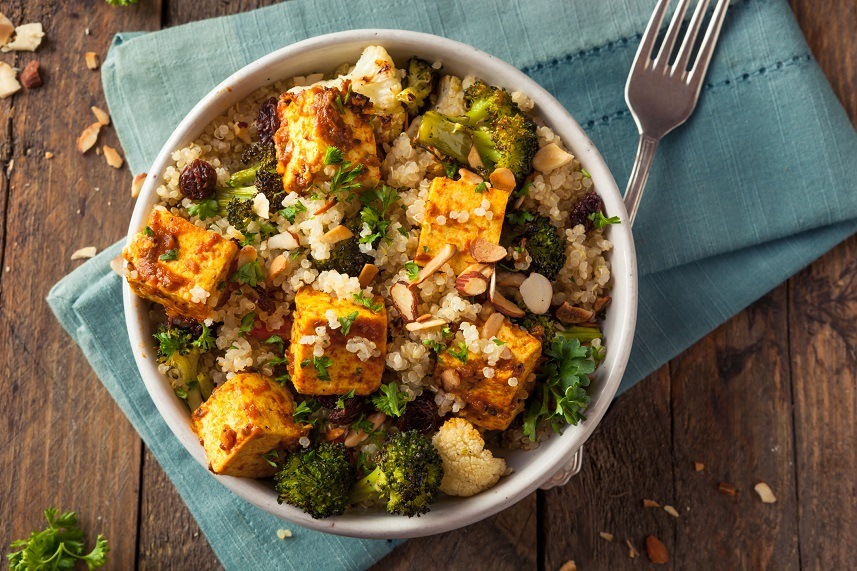 To make sure your power bowl is actually healthy, try making one at home. One of our favorite recipes comes courtesy of Jack’s Wife Freda in New York. It includes delicious (but healthy) ingredients, such as red quinoa, sautéed kale, grilled zucchini, and a boiled egg. You just prepare each of the ingredients and then scoop them into a shallow bowl. This power bowl — and others like it — makes a great lunch or dinner. 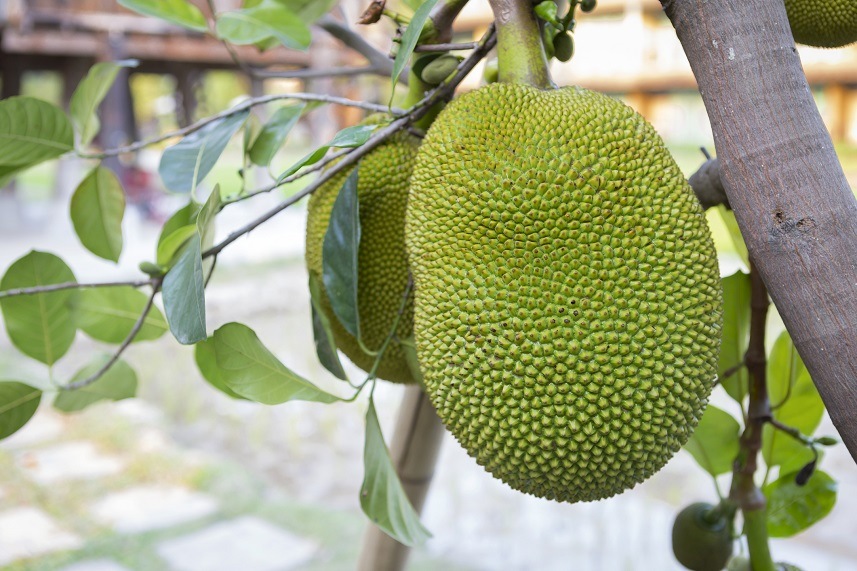 To kick off the list of trendy health foods, let’s look at the jackfruit. Contrary to what you might assume based on its status as a fruit, jackfruit probably won’t replace your daily apple or orange. Consumer Reports explains before it ripens, this Asian fruit has “a texture that’s similar to shredded meat, and it’s low in sugars.” So you can actually use it as a meat replacement. And with the right spices added, it might even remind you (a little bit) of pulled pork. Just bear in mind that jackfruit doesn’t have nearly as much protein as meat or even tofu. 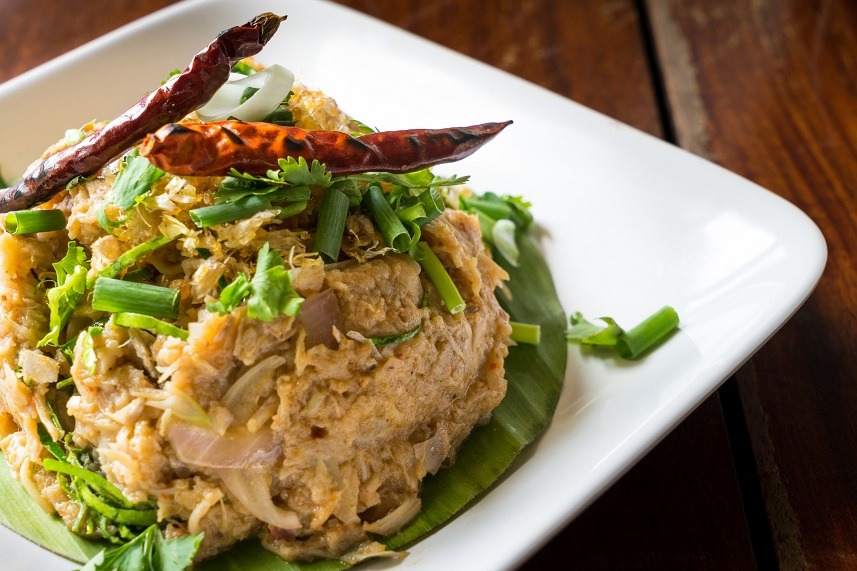 Jackfruit isn’t just for vegans. Buy this fruit at the grocery store (or at your local Asian food store) to give your favorite barbecue sandwich a healthier twist. According to this recipe from the Minimalist Baker, jackfruit “lends itself to mocking meat and absorbing just about any flavor you throw its way.” All you’ll need to do is drain and clean the jackfruit, toss it with your choice of spices, sauté it, and add barbecue sauce. It’s that simple. 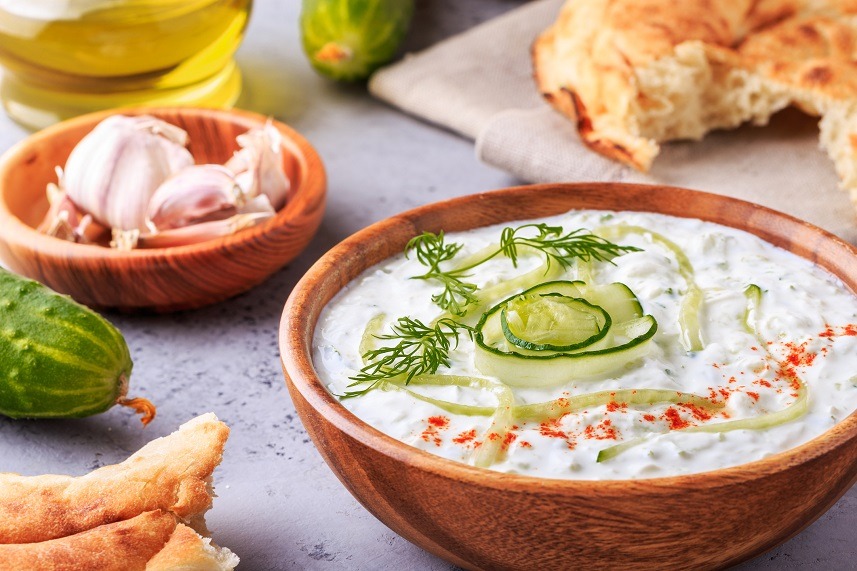 Are you used to the sweet, fruity yogurts you can pick up at the grocery store? Then, prepare your taste buds for something new. “Cumin instead of chocolate, beets instead of berries — savory yogurts are growing in popularity,” Consumer Reports explains. These yogurts still offer a great source of calcium and protein. But they have fewer calories and less added sugar than fruit yogurts. Some are even made with whole milk.

You can find savory yogurt at the store (or at least at the health food store). But if you want to give the trend a try at home, Consumer Reports recommends adding chopped tomatoes and cucumbers, pitted black olives, and a “sprinkle” of the Middle Eastern herb blend za’atar to a bowl of plain yogurt. You can use the blend as a replacement for sour cream dips, which often include too much fat and too many calories. Or check out these delicious savory yogurt recipes for more inspiration.

Another fun trend to look out for? Purple foods. Consumer Reports explains, “You’ll be seeing more purple cauliflower, asparagus, potatoes, rice, cereal, and other foods in stores.” It turns out the color comes from anthocyanins, a kind of antioxidant that might reduce your risk of heart disease and some types of cancer. However, you should still read labels for purple packaged foods, which might contain just as many calories, sugars, and sodium as less-colorful alternatives. 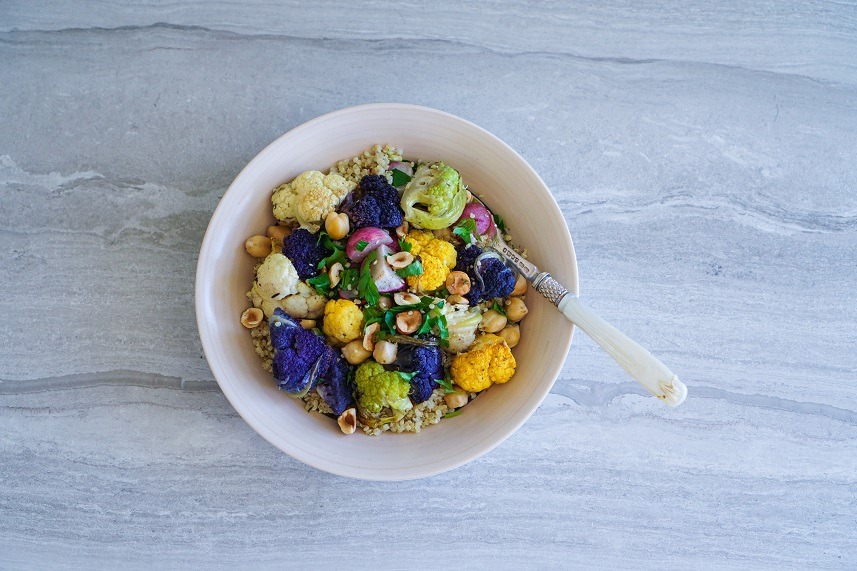 You can cook purple produce in the same way you’d cook those foods in more familiar colors. But if you need ideas, we like this recipe for roasted purple cauliflower steaks or this one for purple cauliflower hummus. Or try out this method for sautéing purple asparagus. And don’t forget to try your hand at this recipe for a rainbow potato roast, which includes sweet potatoes, fingerling potatoes, Yukon gold potatoes, red bliss potatoes, and, of course, purple potatoes.

If you’ve been paying attention, fermented foods probably sound familiar. These foods include live bacteria and plant fibers that improve the health of the microbiome in your gut. The trend is just getting bigger. You can find fermented foods (and beverages), such as kefir, kombucha, kimchi, sauerkraut, and yogurt, at your local grocery store. The probiotics contained in these foods boost the level of good bacteria in your gut, which can improve your digestion, strengthen your immune system, and even prevent disease.

Worried fermented foods won’t taste great? Think again. Prevention reports you can try adding miso to your soups, stir-fries, and even your smoothies. Eat yogurt or drink kefir to start your day with a healthy dose of protein. (Reach for coconut milk yogurt if you need to eat dairy-free.) Switch out your usual tofu for tempeh. Drink kombucha instead of your usual iced tea. Or give fermented veggies, such as pickles, sauerkraut, and kimchi, a try. 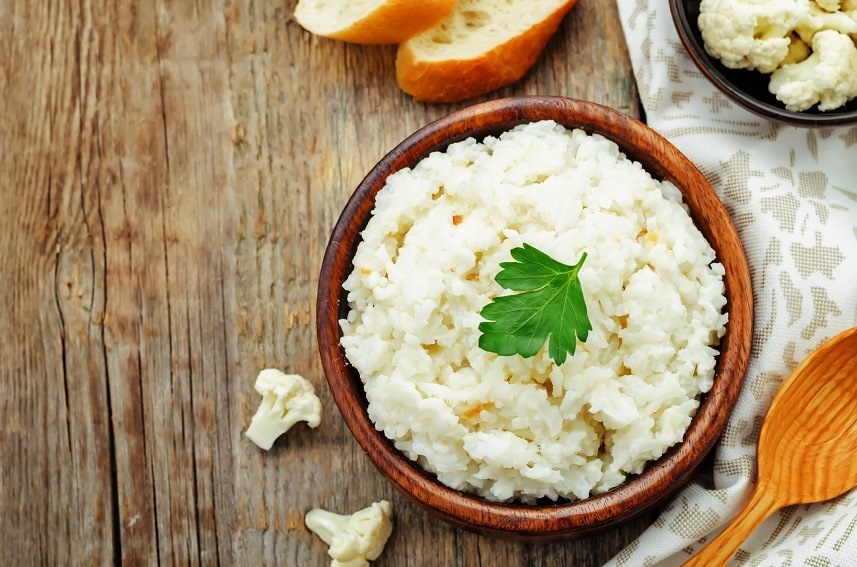 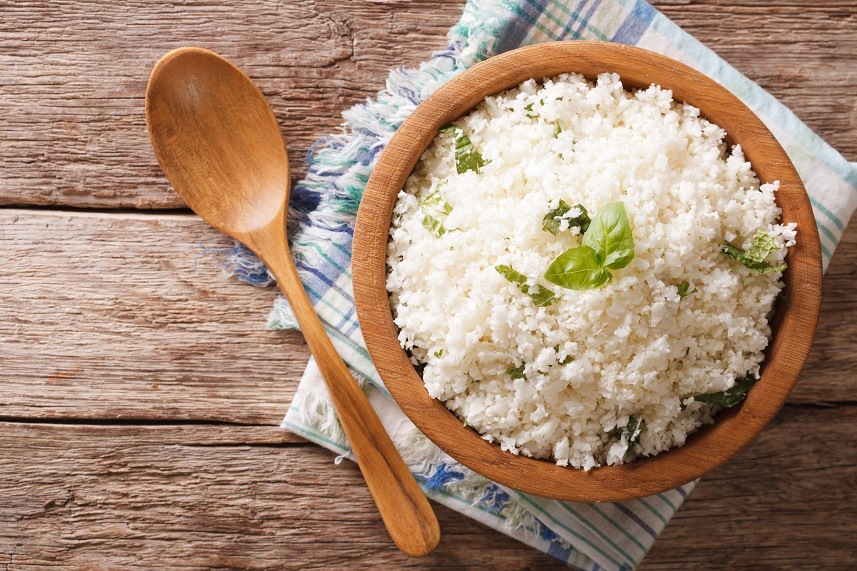 Many of us crave something sweet in the morning. (Why else would Krispy Kreme, Dunkin’ Donuts, and even Starbucks stock so many sugary treats?) But surprisingly enough, chocolate for breakfast earns a place among Consumer Reports’ favorite healthy food trends. People who eat chocolate at least once per week do better on memory and concentration tests than those who don’t. So you can add some dark chocolate chips to your oatmeal or your yogurt — just so long as your breakfast contains a healthy mix of carbohydrates, protein, and healthy fat.

To try eating chocolate for breakfast, you can just sprinkle chocolate chips on top of your usual yogurt or bowl of oatmeal. (You can add some berries, too, for a healthy breakfast that tastes completely indulgent.) Or you can try making your own raw chocolate for a sweet — but nutritious — start to your day. We like this recipe, shared on Into the Gloss, which you can customize to your taste and protein requirements.

You probably reach for whole wheat pasta when you cook a spaghetti dinner for your family. (Or you might go for those vegetable pastas that aren’t really as healthy as you think they are.) But one of the newest food trends is bringing another choice to the pasta aisle: pasta made from chickpeas, lentils, and other legumes. Consumer Reports notes these pastas are great not only for the gluten-free crowd, but also for people who just want more protein and fewer refined carbs in their meals.

Consumer Reports found pasta made from legumes typically has around the same amount of calories as “regular” pasta. But the bean pastas pull ahead in terms of fiber and protein content. As far as taste goes, Consumer Reports testers liked the red lentil varieties. You can check out this delicious recipe for preparing red lentil pasta if you need ideas. But if you’d prefer to go the DIY route rather than try the varieties at the store, you can check out this chickpea pasta and this lentil pasta for an easy starting point.

We get it. “Plant waters” sounds pretty weird. But we’re all familiar with coconut water. Thanks to the latest food trend, you can expect to see more beverages like it, including some made from artichoke, cactus, and cucumber. They act as natural hydration and offer a healthier alternative to sports drinks. Although you probably don’t need anything other than plain old water after a workout, plant waters typically have just 25 to 30 calories in an 8-ounce serving, compared to an average of 53 calories for Gatorade. Plus, they usually contain no sweeteners or only contain the sugar naturally present in the plant.

Cucumber water, cactus water, and even artichoke water might not be new. But they’re gaining momentum among the same crowd that reaches for coconut water for a healthy boost in hydration. Still not convinced? Vice reports artichoke water “is not as horrifyingly disgusting as it sounds.” And Allure reports cactus water isn’t nearly as “nauseating” as coconut water but instead “tastes like very lightly sweetened water,” much like “a delicious liquid multivitamin.” 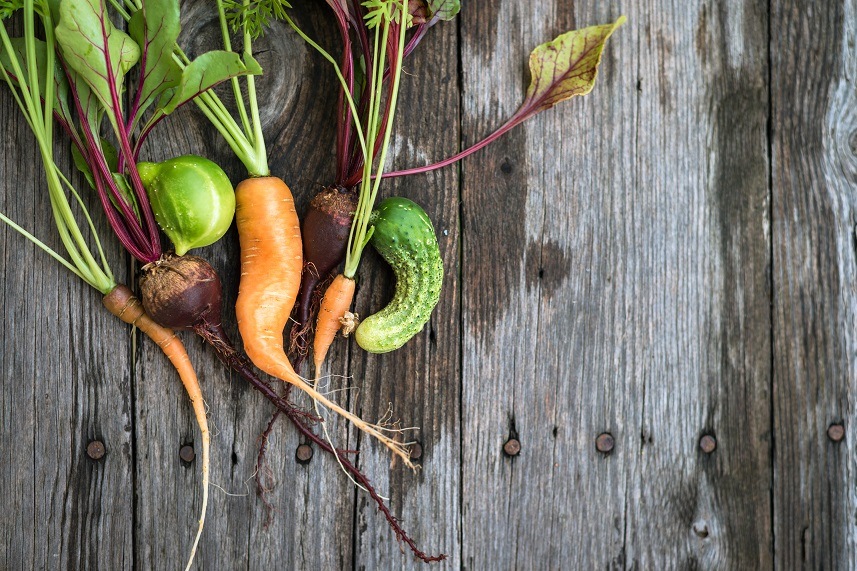 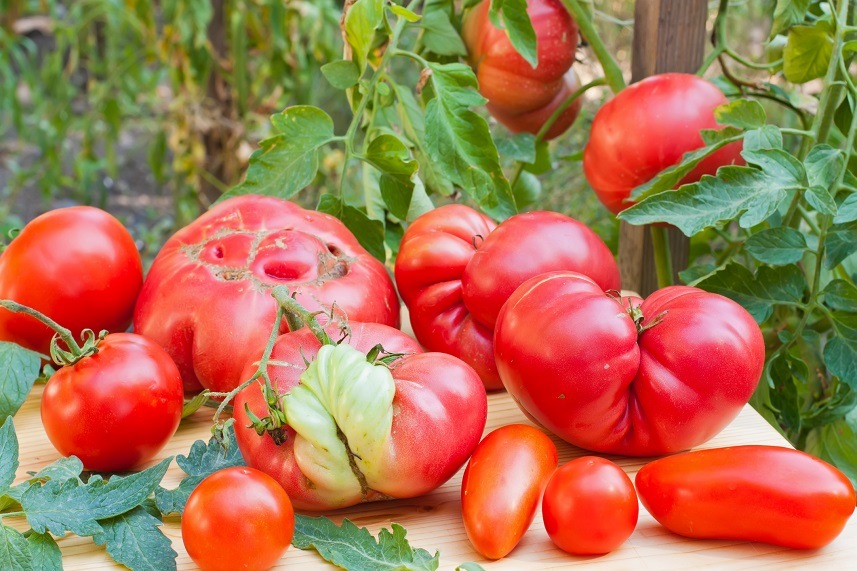 You can use “ugly” produce in exactly the same way you’d use a fruit or a veggie with a more textbook appearance. And you can feel good about reducing food waste while you roast those weird-looking carrots or chop up a strangely-shaped tomato. Consumer Reports explains, “Unsold produce costs supermarkets $15 billion each year and contribute to the estimated 40 percent of food wasted in the U.S. Unlike an extra soft avocado or a moldy apple, ‘ugly’ produce items are just as nutritious and tasty as their impeccable counterparts.”