This Is the 1 Healthy Food That Everybody Loves to Hate

You know that you should eat a healthy diet. But everyone has some foods that they just hate, no matter how many magazine covers proclaim their health benefits, or how fervently nutritionists recommending getting on board. You might think that you’re alone in detesting some of these healthy foods. But, we promise, you’re not! In fact, many healthy foods that we all pretend to like are actually pretty unpopular.

Below, check out some of the healthy foods that, at least in secret, many of us love to hate. See if any of your personal bugbears make the list!

Even when prepared well, they taste like dirt. | iStock.com/Dianazh

Let’s start simple. Plenty of people dislike beets because they taste, well, like dirt. These vitamin-packed veggies have plenty of nutritional value. But most of us won’t eat them out of a can. (Roast them or pickle them, and there’s a slightly better chance we’d give them a try.) Some people get past the earthy taste, or even profess to like it. But for others, there’s just no way to choke this veggie down.

Next: This vegetable often tastes bitter.

You can get bell peppers in just about any color — green, yellow, orange, and red — at the grocery store year-round. But some people always steer clear. Many people think that they taste bitter, especially the green bell peppers, which are typically harvested before they fully ripen. Sauté, roast, or grill away: Many people find that they never like bell peppers, no matter how they’re prepared.

Next: Everybody learned to hate this veggie as a child.

Another produce section staple, Brussels sprouts seem to attract much more hate than love. Though many people profess to like them roasted, baked, or prepared any way other than thawed from a frozen bag, others refuse to go near these spherical little vegetables. Brussels sprouts haters proclaim that they taste bitter and often get soggy or waterlogged — none of which are qualities we covet in a vegetable!

Next: This health food gets slimy.

Chia seeds make an appearance in many juices and smoothies, and even in yogurt. They look small and innocuous. But the problem? They develop a slimy coating when wet. And there’s nothing worse than getting a mouthful of gelatinous chia seeds when you just wanted a healthy but ultimately inoffensive breakfast. If your nutrition-obsessed friends insist that you try them, make sure that you go for them dry — like in granola — instead.

People have a love-hate relationship with this herb. | iStock.com

The more green foods on your plate the better, right? Wrong, according to the many people who can’t stand the taste of cilantro. Some people sprinkle it liberally over their tacos, and on numerous dishes that originate in Latin American and Asian cuisines. However, some of the compounds in cilantro make it taste like soap to a large number of people. So it’s a pretty popular herb to hate! (We told you that you weren’t alone!)

Next: This food tastes very sour.

This cheese has a very pungent flavor. | iStock.com/NatashaBreen

Goat cheese — simply cheese made from goat’s milk — seems to have risen to promise at Whole Foods as well as at expensive restaurants. But you aren’t alone if you just can’t stomach this healthy food. It has a tart flavor, thanks to the fatty acids found in goat’s milk. Even people who love cheese of other types often find goat cheese inedible. They often report that the sour aftertaste, cruelly enough, lasts for a long time, even when they’ve only had a small dose of goat cheese on top of a pizza or a salad.

Next: This food has a strange texture.

This creamy dip is a healthy diet staple. | iStock.com

Hummus, a dip made from chickpeas, tahini, olive oil, lemon juice, and salt, seems to be everywhere these days. You’ll see it on sandwiches and on top of salads, as a dip for chips and of course as a condiment to accompany pita bread. But not everybody’s on board. That could be because hummus typically includes garlic, which offends many people’s tastebuds. But you could also blame the texture of hummus, which can range from smooth to downright gritty if the chickpeas weren’t prepared properly.

Next: This fruit has a strange taste — and lots of tiny seeds.

Though plenty of people seem to think the kiwi makes a delicious and healthy snack, others know better. They detect more than a hint of sourness in its flavor. Plus, many people get weirded out by the tiny, edible seeds inside it. And if you’ve ever witnessed somebody eating a kiwi without peeling off the hairy skin, just eating it instead, you’ll probably never go back to eating kiwis again.

Next: This beverage gets fermented, and tastes like it.

This dairy product might be healthy, but it’s not the most pleasant taste. | iStock.com/Juanmoro

Even if regular milk or yogurt aren’t gross to you, we can basically guarantee that you’ll think twice before consuming kefir. This fermented milk drink comes packed with probiotics, but it also has a distinctive sour taste. That taste, as well as the idea that the milk is fermented, keeps many people away from this healthy beverage. It also doesn’t help that people consistently compare it to yogurt, which just further grosses out people who don’t like yogurt, either.

Next: This beverage also gets its strange taste through fermentation. 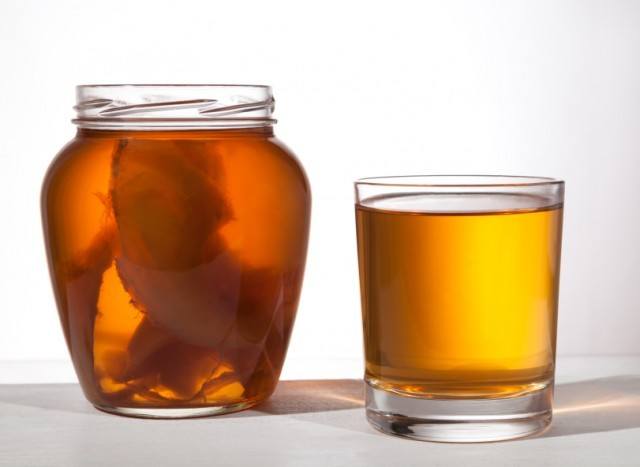 The fermented tea hasn’t won over everyone. | iStock.com

Your health nut friends may love kombucha, a fermented tea drink, but that doesn’t mean you’d go anywhere near it. Kombucha tastes pretty much like what it is: fermented tea. Still unsure? That means it tastes more than a little bit like vinegar. It doesn’t help that you make kombucha with a scoby: a gelatinous disc of bacteria and yeast that transforms regular tea into kombucha. It’s as gross as it sounds — at least to skeptics, who don’t understand why anybody willingly drinks the stuff.

Next: This meat has relatively few fans.

Lean cuts of lamb serve as a great source of protein, and the meat can make a healthy addition to your diet provided you eat it in moderation. But if you shudder at the thought of eating this healthy food, you’re certainly not alone. Plenty of people refuse to eat lamb because they don’t eat meat. Others won’t go near it because it counts as red meat. Still others just don’t like the sweaty, barnyard-y taste that lamb typically has, even when prepared well.

Next: This legume tastes and smells gross.

Have you ever noticed a sour taste from lima beans? | iStock.com/Bhofack2

According to those who hate them, lima beans have a distinctive (and disgusting) sour taste. But that’s not all. They also have a distinctive odor that you can detect whether somebody serves lima beans on their own or mixed in with other vegetables. (The horrors!) Plus, their texture, which can get mealy at times, doesn’t really help their cause, no matter how nutritious doctors say they are.

Next: This food looks and tastes disgusting.

Many people find this unappealing. | iStock.com

Another kind of meat that many people won’t eat, even in the name of nutrition? Liver. Many people feel opposed to eating just because they know the liver’s function in an animal’s body: taking up toxic substances, and converting them into forms that can then be excreted by the body. Even that’s enough to give you pause. But plenty of people find the look of liver — not to mention the taste — pretty gross, as well.

Next: This common beverage often grosses people out.

Some people have bad reactions to milk. | iStock.com

Everybody knows that milk makes a nutritious beverage. But many of us haven’t willingly drunk a glass of milk since childhood. Though it doesn’t have a strong flavor, it definitely has a distinctive taste. To many people, it tastes strange or sour. And to others, a glass of milk can never be cold enough to actually seem palatable. And as almost anyone can agree, there’s almost nothing worse than a room-temperature glass of milk. Yuck!

Next: This food grows in some pretty gross conditions.

Their growing conditions gross some people out. | iStock.com/Jatrax

Plenty of people dislike mushrooms, either raw or cooked, for their earthy taste. Others can’t quite get over the fact that mushrooms typically grow in moist and often dirty conditions. And then there’s the question of texture. When raw, mushrooms are smooth, but may squeak when you sink your teeth into them. And if not cooked properly, they can easily get slimy and squishy.

Next: This food also has a slimy texture.

Though they don’t exactly count as a health food if you order them fried, oysters are a sustainable seafood option that comes packed with plenty of healthy compounds, including as iron, zinc, and vitamin B12. But that won’t do you any good if you count yourself among the many people who just can’t stomach these slimy sea creatures. Our main complaint is the slippery texture, which people somehow get past to enjoy this famed aphrodisiac.

Yogurt is a wildly popular breakfast food. And these days, it enjoys popularity as a snack, too, thanks to travel-friendly containers. But many people just can’t get on board, no matter how numerous the probiotics or how healthy the protein. To many people, yogurt just tastes like sour milk — especially “plain” varieties. Adding fruit, nuts, or sugary toppings can help disguise the taste, but that doesn’t completely cover it up.