5 Creative Ways to Use Pears This Season

Vegetables usually get the most attention when it comes to healthy eating. The sweeter side of produce has more to offer than you might expect, though, even the humble pear. Digging into this fruit is a seriously smart choice because one serving contains just 100 calories, 10% of your daily vitamin C needs, and a whopping 6 grams of fiber. But the best news is pears taste so delicious as is that you hardly have to lift a finger to turn them into spectacular meals. See what we mean with these five recipes. 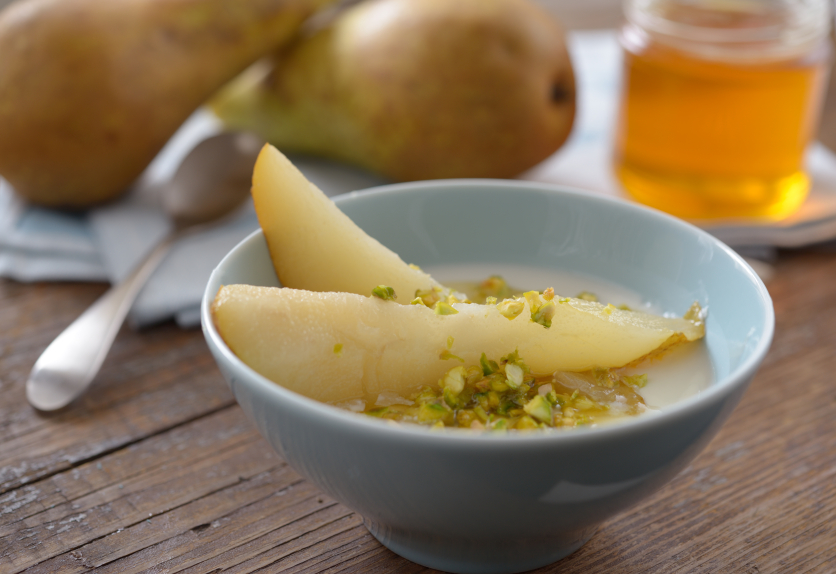 If you’re sick of your regular breakfast rotation, shake things up with Food & Wine’s creamy ricotta and pear parfaits. Though the name sounds indulgent, this morning meal is brimming with healthy fats, fiber, and protein for just 224 calories per serving. The secret is part-skim ricotta, which has tons of rich taste. If you’re short on time, skip the poaching process and toss diced pear cubes with some maple syrup.

Consider this breakfast your ticket to a healthy heart because pears can do wonders for your ticker. One study linked the pale produce to a substantially lower risk of stroke. Things only get better when you add a sprinkling of pistachios, which are rich in unsaturated fats.

Bring poaching liquid to a boil and stir in sugar, butter, and vanilla. Simmer over medium heat until liquid is reduced to ½ cup, 8 to 10 minutes.

In a bowl, whisk ricotta until smooth and dollop a third of the cheese into six glasses. Top with half of the pears, then another layer of ricotta, remaining pears, then remaining ricotta. Sprinkle pistachios on top and serve. 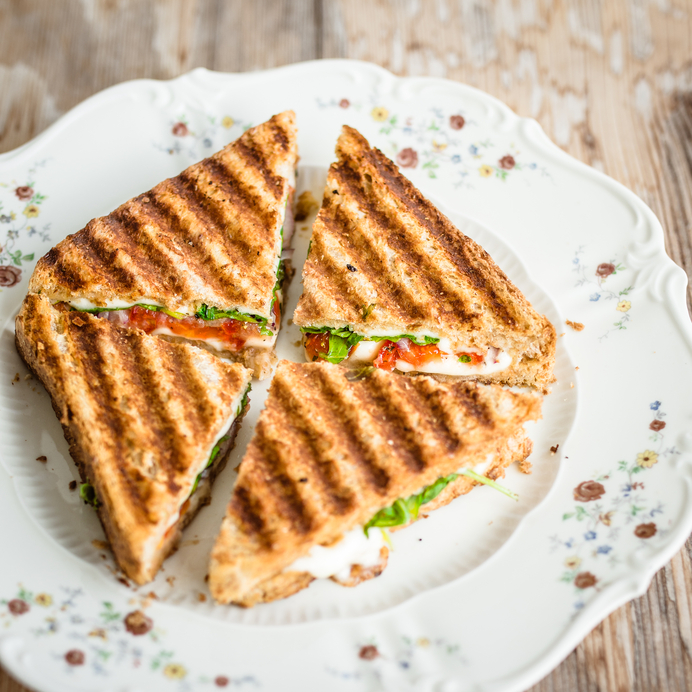 There’s no need to banish sandwiches to your lunchbox when you make Cooking Light’s between-bread meal packed with pears, blue cheese, and prosciutto. This sweet and savory sandwich is substantial enough for dinner when paired with a simple vegetable side dish, which means you can be chowing down just 20 minutes after walking in the door. That being said, it’s also a great option for brown bagging if you skip the toasting.

In addition to tasting fantastic, this sandwich is a great choice for your health, especially if you swap the multigrain bread for rye. A study published in the Journal of Nutrition found eating foods typically found in a Nordic diet, including pears and rye bread, was associated with a reduced risk of mortality. Root vegetables also made the list, so consider cooking some parsnips and carrots to serve on the side.

Directions: Preheat broiler. Arrange bread in a single layer on a baking sheet. Broil until toasted, about 3 minutes. Turn bread slices, spread evenly with butter, and broil for 2 minutes longer, or until toasted. 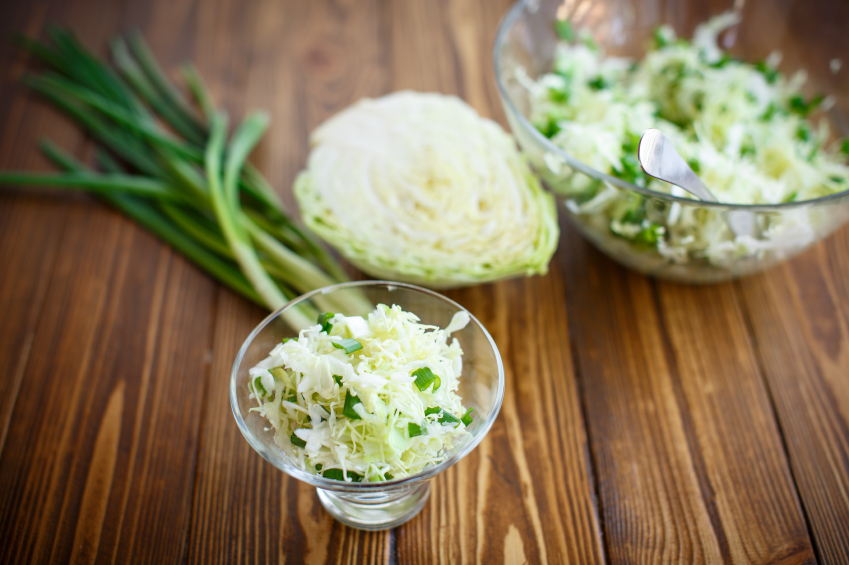 A lot of creamy slaws are practically swimming in dressing, which definitely isn’t good for those hoping to eat a bit better. You can still enjoy the taste you love without destroying your diet when you make Bon Appétit’s sweet and tangy slaw. Most of the richness comes from buttermilk, which is surprisingly low in calories and fat, with just a bit of mayo and sour cream.

The secret to this slaw’s sweet taste is Asian pear, and you might be surprised what this fruit can do. Some studies have found Asian pear juice can help lessen the effects of a hangover, but only when ingested prior to alcohol. This might become your new go-to food before hitting the town. 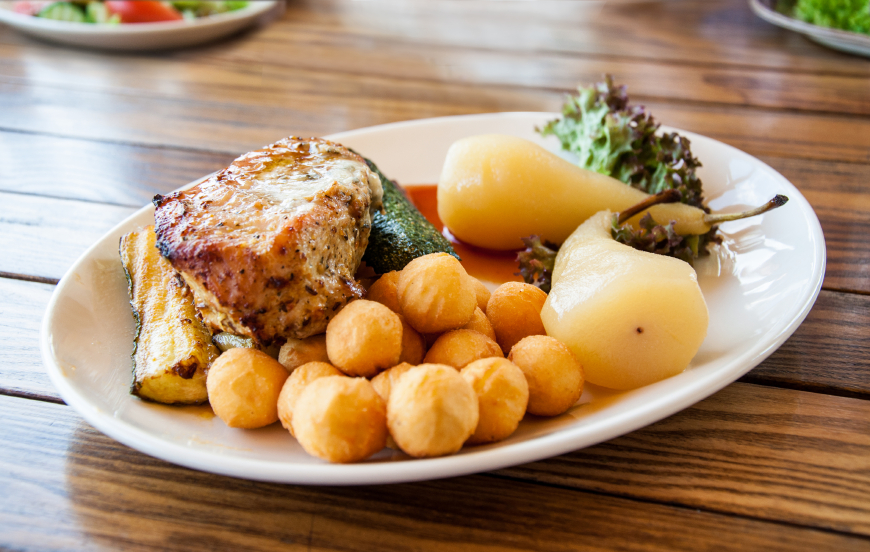 Pork pairs wonderfully with many different types of fruit, so it’s time you gave pears a chance. We like Whole Foods’ pork loin dish because everything roasts together in the same pan, which makes for easy prep and cleanup. Feel free to play around with different herbs and spices as well. Crushed fennel seeds and rosemary would be delicious.

While roasted vegetables are a lot more common for dinner preparations, using fruit is an equally smart choice for staying slim. One study found high levels of fruit and non-starchy vegetable consumption was negatively associated with weight gain, but the slimming effect was actually greater for fruit. Talk about sweet.

Directions: Preheat oven to 400 degrees Fahrenheit. Rub pork all over with 1½ teaspoons oil and season with 1½ tablespoons thyme, and salt and pepper. In a large bowl, toss pears, shallots, remaining oil, and remaining thyme. Arrange pears and shallots in a 9-by-13-inch baking dish. Place pork on top, fat-side up. Roast until an instant-read thermometer inserted into the thickest portion of the pork registers 145 degrees Fahrenheit, about 1 hour.

Let pork rest for 15 minutes, then trim twine. Slice pork and serve with pears and shallots. Drizzle with pan juices. 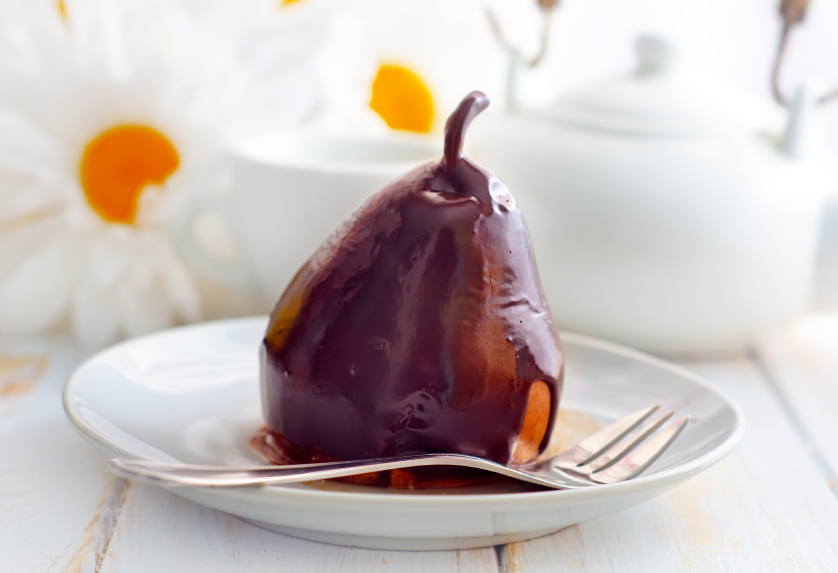 Chocolate and pears make a classic dessert combination, but the preparations are usually a little bit involved. Martha Stewart Living takes a healthier and easier approach by simply coating the fruit in chocolate. Make these just before dinner, and they’ll be ready when you are.

This dessert proves you don’t need loads of added sugar to satisfy a dessert craving. Most of the sweetness comes from the the fruit, which is good news in an age when diabetes is on the rise. In fact, one study found eating foods high in anthocyanins, including pears, can reduce your risk of diabetes.

Directions: Melt chocolate in a heatproof bowl set over a pot of simmering water, stirring until melted and smooth. Let cool slightly.

Starting at the bottom of each pear, use a teaspoon to scoop out core, leaving stem and top intact. Dip bottom three-quarters of each pear in chocolate. Transfer to a parchment-lined plate. Refrigerate until chocolate sets, at least 15 minutes and up to 2 hours. Bring to room temperature before serving.