It’s the season for bell peppers. While you can find these versatile vegetables in stores year round, they hit their peak in the late summer and early fall, when you’re likely to encounter mounds of them at your local farmers’ market, in your grocer’s produce section, or perhaps in your own backyard garden.

You can take advantage of nature’s bounty and use colorful peppers to brighten your dinner table. Plus, they’re a good source of vitamins A and C, beta-caroten, folic acid, and other nutrients. Whether you like them roasted, stuffed, pureed, or pickled, here are seven recipes for fresh, in-season bell peppers. 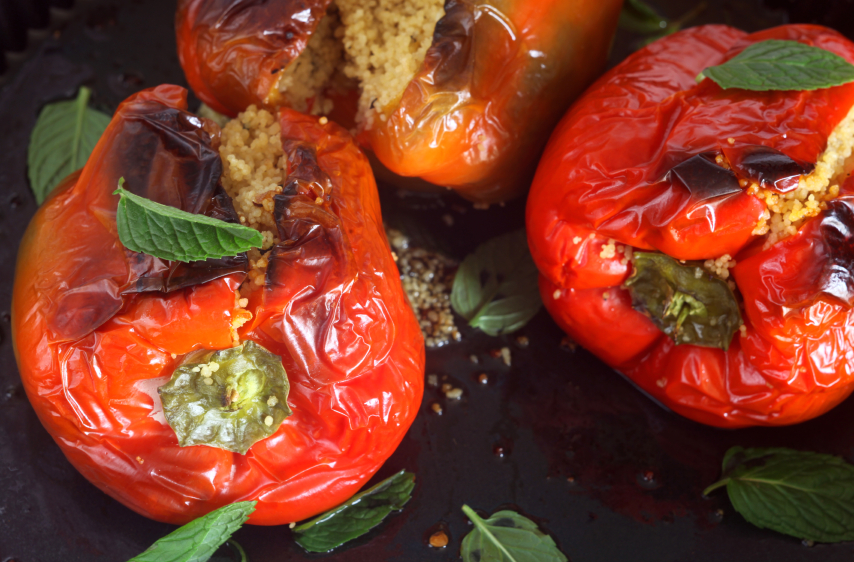 You can stuff a bell pepper with everything from ground beef to quinoa. This vegetarian-friendly spin on the simple-yet-classic dish comes from Smitten Kitchen and includes couscous and feta cheese for a flavorful Mediterranean-influenced meal.

Add the broth to a saucepan and bring to a boil. Add the couscous, then cover the pan and remove it from the heat.

While the couscous cooks, cut the stems and top half inch off the bell peppers. Remove the seeds and membranes from the peppers. Place the peppers upright in a baking dish coated with non-stick cooking spray. Roast in the oven until the peppers soften, about 15 minutes. Remove from the oven and set aside.

Heat the olive oil in a nonstick skillet. Add onion, zucchini, yellow squash, fennel seeds, oregano, and salt to the pan and then cook, stirring frequently, until vegetables are softened, about 5 minutes.

Remove pan from heat and stir in the tomatoes, chickpeas, and tomato paste. Fluff the couscous with a fork, then add to the skillet and toss with the vegetables. Stir in the feta. Fill peppers with the couscous and vegetable mixture. Bake for 15 minutes, then serve. 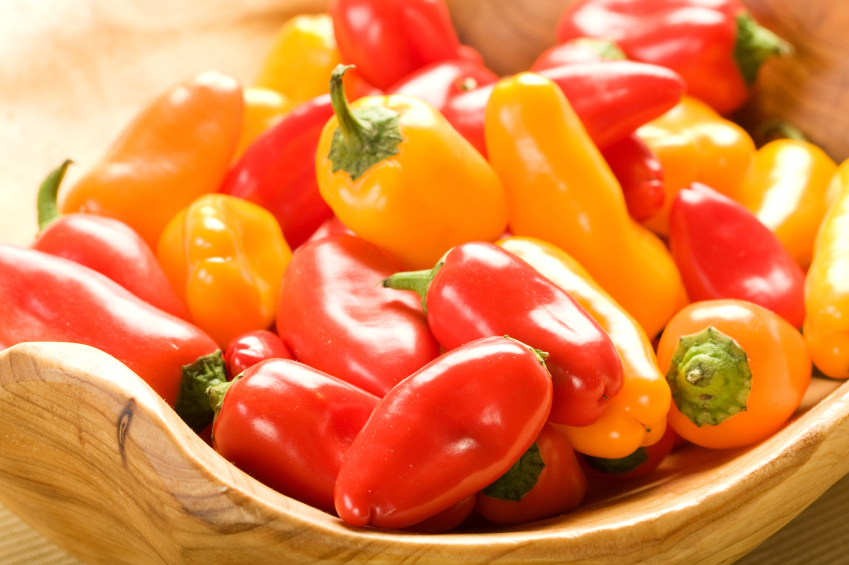 Make like Peter Piper and enjoy some pickled peppers. Refrigerator-pickled peppers are easy to make and are great either on their own or as a garnish for sandwiches or salads. This recipe from The Washington Post makes 3 pints, which will keep in your refrigerator for at least a month. You’ll need jars with tight-fitting lids to hold the peppers, or bowls that you can cover.

Directions: Trim and discard the stem ends of the peppers. Using a small knife, stab each pepper three or four times, so the brine will suffuse the pepper inside and out. Snugly pack the peppers into the jars. Add 1 teaspoon pickling spice and 1 lemon peel strip to each jar (if using).

Combine the water, white and cider vinegar, salt, sugar, and garlic (optional), in a medium saucepan. Bring to a boil over high heat for 1 minute, making sure the salt and sugar have dissolved. Pour brine over the peppers to submerge them (you should have some leftover). Let the peppers sit for 15 minutes to absorb the brine, then add more brine, pressing down on the peppers to encourage them to stay submerged. Repeat the brine additions every 15 minutes or so for the next hour. You may have leftover brine at the end.

Cap and refrigerate for 5 days before serving.

Note: This brine works for pickling other types of peppers as well, including jalapeno and banana peppers. Feel free to tweak the spices to your taste, such as substituting the pickling spice for dill. 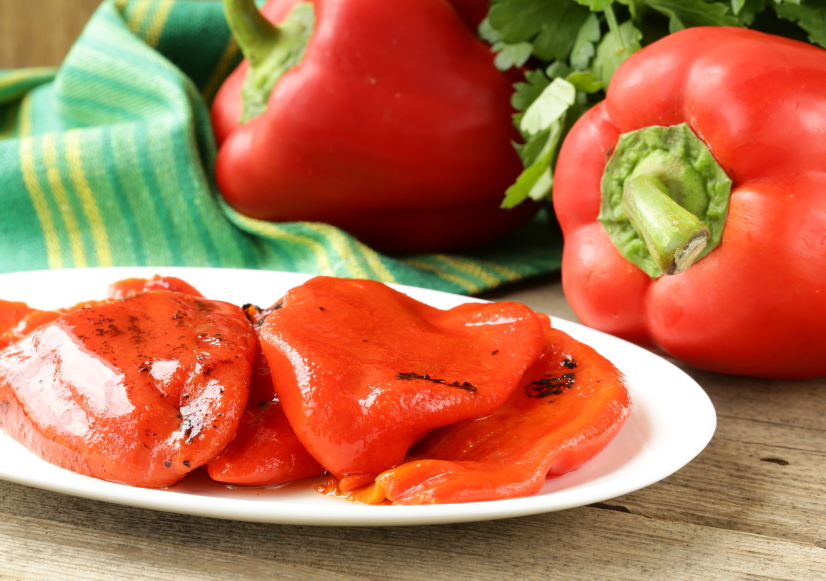 Creamy goat cheese and sweet roasted red peppers come together in this simple yet flavorful sandwich from Ina Garten. The roasted red peppers can be made ahead of time and used in other recipes if you like. Simply place the cooked, peeled, and seeded peppers and the vinegar-oil mixture in a bowl, and store, covered, in the refrigerator until ready to use.

To prepare peppers: Place the whole peppers on a sheet pan and cook in the oven for 30 to 40 minutes, until the skins are completely wrinkled and the peppers are charred, turning them twice during roasting. Remove the pan from the oven and immediately cover it tightly with aluminum foil. Let cool for 30 minutes.

Combine the olive oil, balsamic vinegar, garlic, salt, and pepper in a small bowl. Set aside.

Remove the stem and quarter each peppers. Peel and seed the peppers and place them in a bowl along with any juices that have collected. Pour the oil and vinegar mixture over the peppers. Stir in the capers. Cover with plastic wrap and refrigerate for a few hours to allow the flavors to blend.

To make sandwiches: spread the bottom half of the loaf with the goat cheese. Add a layer of peppers and then a layer of basil leaves. Separate the onions into rings and spread out on top. Sprinkle with salt and pepper. Cover with the other half of the bread and cut into individual sandwiches. 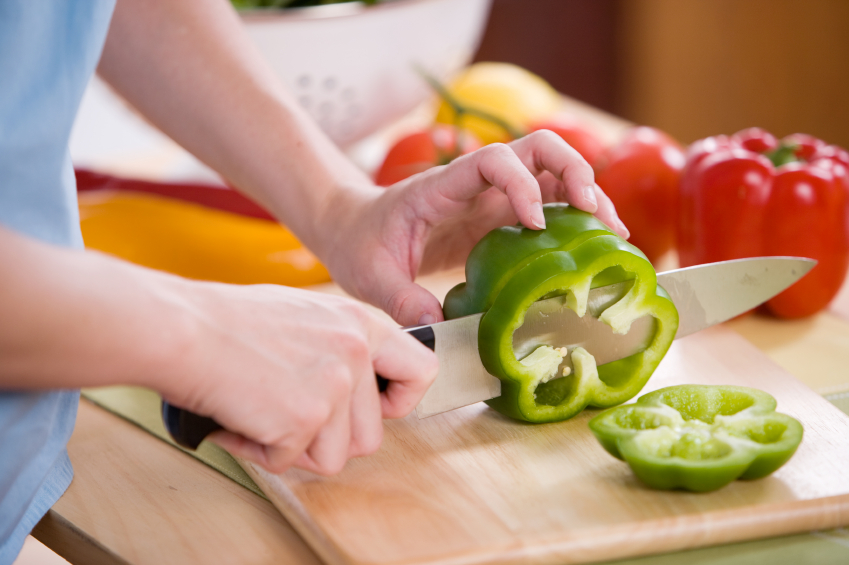 Fried bananas and bell peppers come together in this satisfying snack from Saveur. While using chickpea flour will yield the best results in this recipe, you can substitute all-purpose flour if that’s not available.

Pour 2 inches of oil into a 6-quart Dutch oven. Heat over high heat until a deep-fry thermometer reads 400 degrees Fahrenheit. Working in batches, dip bananas and peppers in batter, shake off excess, and fry, turning occasionally, until crisp, about 1 minute. Using a slotted spoon, transfer to paper towels. Sprinkle with black salt, if desired. 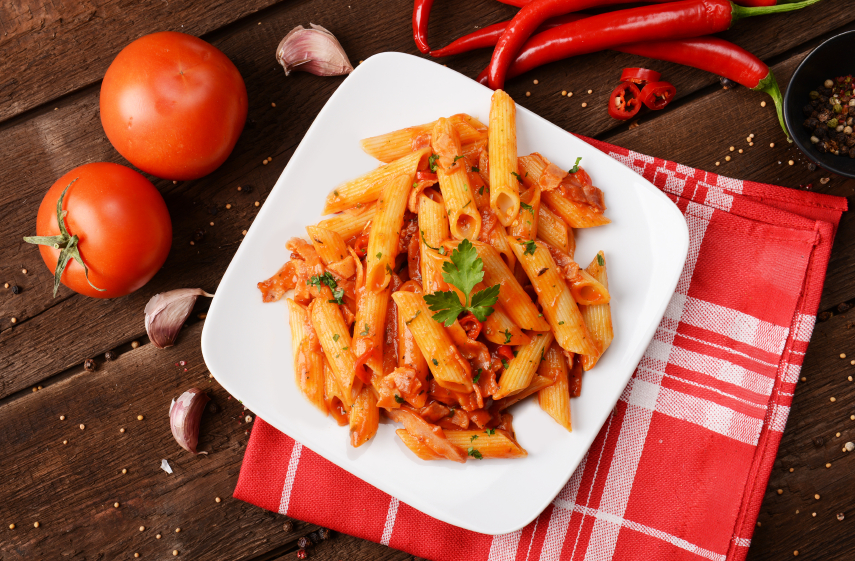 If you’re bored with your basic tomato sauce, switch things up by using roasted red peppers instead. You can serve this delicious sauce over whatever type of pasta you prefer. Recipe from Two Peas and Their Pod.

Directions: Roast red peppers for about 10 minutes, until the skins are completely blackened (you can do this over a gas flame, under the broiler, or on the grill). Place peppers in a paper bag or in a bowl covered with plastic wrap (use tongs to avoid burning your fingers). Let them sit for about 10 minutes (this will make them easier to peel). Peel the skins from the peppers and remove the stem and seeds. Chop the peppers and set aside.

Pour the olive oil into a large saucepan and heat over medium heat. Sauté chopped onion until it is soft, about 2 to 3 minutes. Stir in garlic, red peppers, and diced tomatoes. Reduce heat to medium-low and cook for 10 minutes. Add 1 cup of chopped basil and season to taste with salt and pepper.

Use an immersion blender or food processor to purée the pepper and tomato mixture until mostly smooth. Taste and add more salt and pepper if you like.

Cook pasta. When pasta is done, place it in a large bowl and add the sauce. Garnish with Parmesan cheese and fresh basil, then serve. 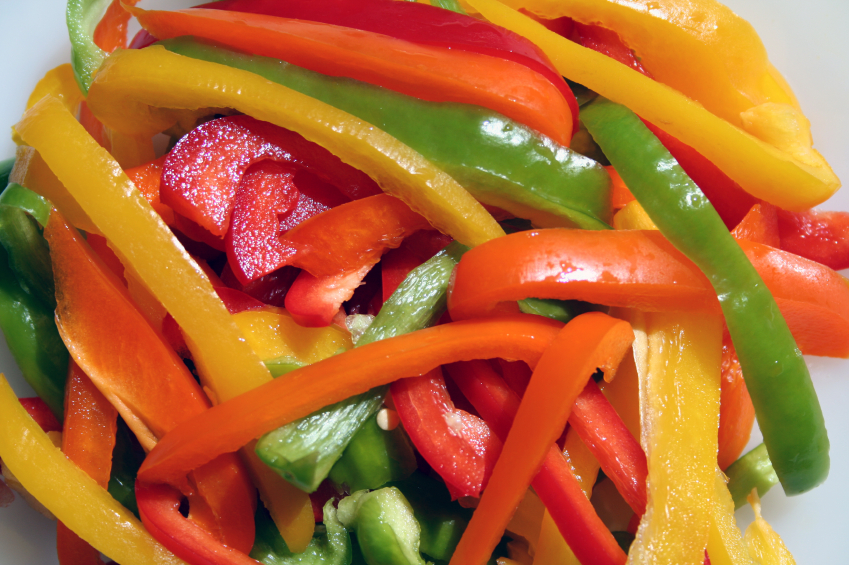 These caramelized onions and bell peppers are the perfect accompaniment for steak, or you can try using them as topping for hamburgers or spooned on top of crusty bread for a quick snack. You could also make this dish ahead of time and serve as a simple side at your Labor Day barbecue. Recipe from Once Upon a Chef.

Directions: Pour the oil into a large skillet and heat over medium-high. (A stainless steel or cast iron skillet works best for caramelizing onions, per the Kitchn.) Add the onions, peppers, ¼ teaspoon salt, and ¼ teaspoon pepper.

Cook the peppers and onions, stirring every few minutes, until onions are caramelized and peppers are browned and tender. This should take about 15 to 20 minutes.

Reduce heat to low, then add the balsamic vinegar and thyme to the pan. Cook for a few more minutes. Add more salt and pepper to taste. Serve, either warm or at room temperature.

7. Roasted Shrimp with Peppers and Lemon 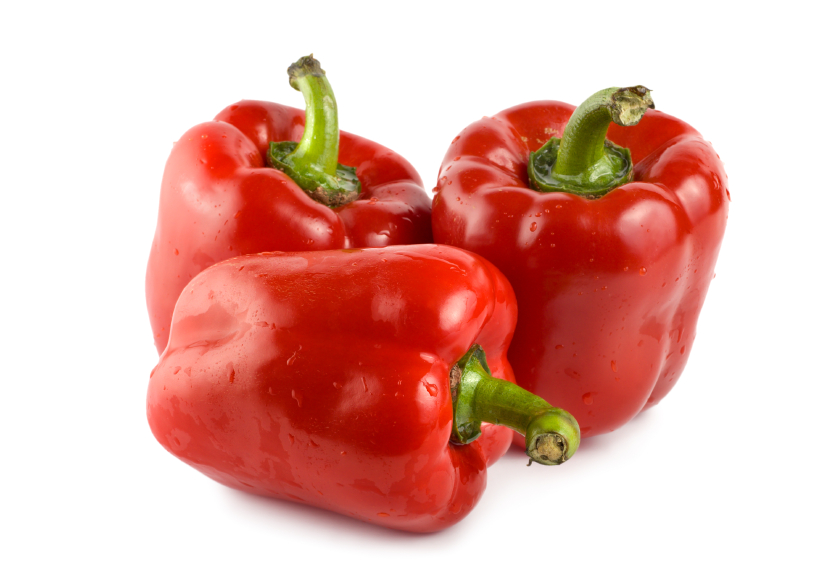 Succulent shrimp, sweet red peppers, and lemon all come together in this easy meal, perfect for busy weeknights. Recipe from Real Simple.

Directions: Heat oven to 450 degrees Fahrenheit. Cook rice according to the package directions.

Toss the bell pepper, lemon, thyme, scallions, red pepper, 1 tablespoon of the oil, and ¼ teaspoon each salt and black pepper together in a large bowl. Spread the pepper mixture on a rimmed baking sheet.

Add the shrimp to the bowl and toss with the paprika, remaining tablespoon of oil, ½ teaspoon salt, and ¼ teaspoon pepper. Nestle the shrimp in the middle of the mixture on the baking sheet.

Roast until the shrimp are fully cooked and the bell peppers are tender, 10 to 12 minutes. Serve over the cooked rice.