A good Samaritan with a Facebook page wants to help survivors of the Las Vegas massacre find closure. CNN reports Ashton Zyer launched “Find Your LV Hero” a couple of days after the mass shooting. So far, Zyer has helped more than 30 people find their saviors — and closure — and she said the demand far exceeds her expectations.

“I didn’t even imagine I would get that many people looking and searching,” she said. “When I heard them say ‘I finally feel like I can start healing now,’ like this is the piece of them that they needed before they could move on, that was the part that was overwhelming.”

Here are the most heartwarming stories from the connections Zyer and her page have helped facilitate.

1. They helped people and now want to check back in 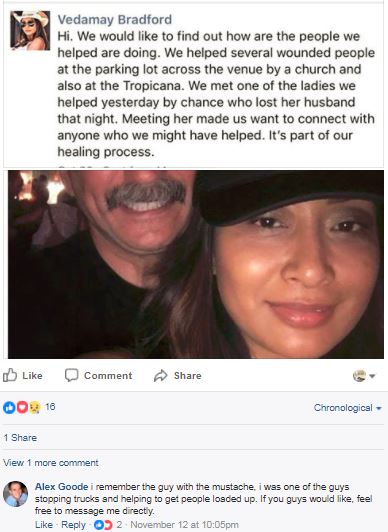 They wanted to check in with the victims. | Find Your LV Hero via Facebook

This couple helped get victims to safety after the mass shooting and the Facebook page helped them reconnect. Author Leila Levinson wrote about the healing power of sharing stories on The Huffington Post. She writes, “Telling our stories … releases some of the energy the experience created and begins to externalize the experience. In telling it, in giving the story to another, it is not ours alone. Someone is sharing it with us. In enabling another to understand and have empathy, we move out of the sense of isolation the experience fostered into community, a requirement for healing.”

2. This woman found her savior using the page 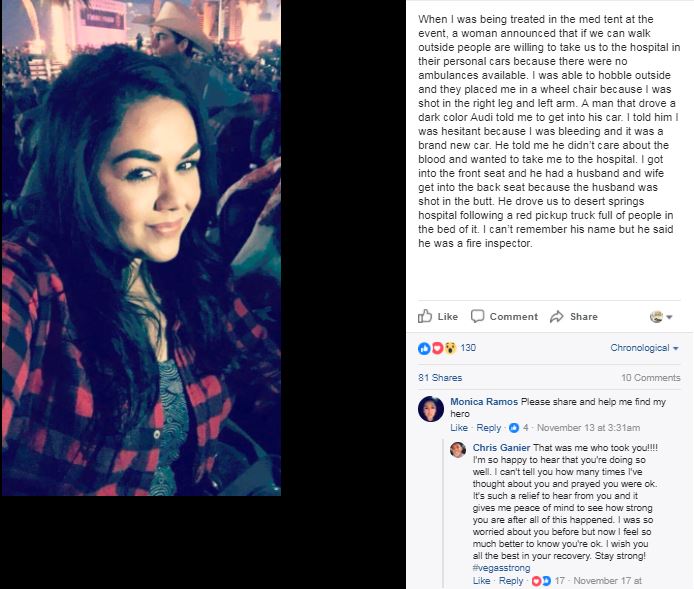 Monica Ramos connected with Chris Ganier after the Las Vegas massacre. According to the Substance Abuse and Mental Health Services Administration, validation and connection serve as important parts of trauma recovery. The document also provides a range of other services and tools for victims to utilize. By connecting victims to their saviors and others who went through the same thing, “Find Your LV Hero” plays an important part in the recovery process.

Next: Revisiting the site actually helped this group.

3. These victims revisited the site of their trauma — together 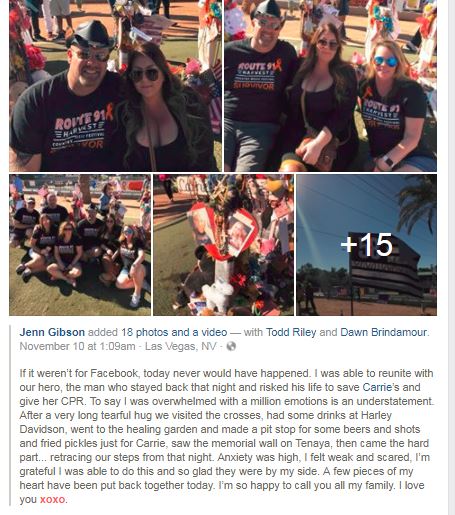 They went back and helped each other heal. | Find Your LV Hero via Facebook

Jenn Gibson reunited with Todd Riley and Dawn Brindamour using the Facebook page. By visiting the site together, Gibson, Riley, and Brindamour drew strength from one another. While it may seem counterintuitive, it can actually provide closure. As Psychology Today explains, “While it may not be easy to revisit the sights, sounds and psychic memories of your trauma, it can help you heal.”

Next: This woman sprang into action when victims needed her.

4. This off-duty nurse found the woman she helped save 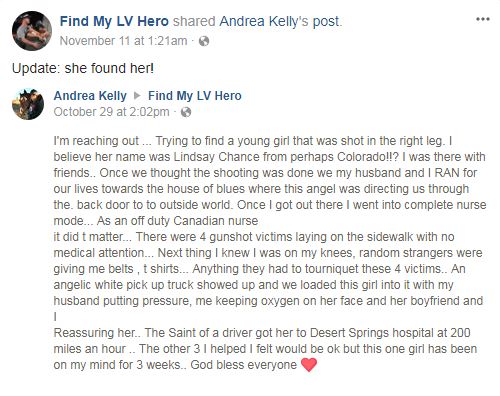 Andrea Kelly followed her nurse’s instincts when it counted. | Find Your LV Hero via Facebook

Andrea Kelly reconnected with Lindsay Chance and her sister, Kelly Schrag, via the Facebook network. Experts note that even those who respond to traumatic events can fall victim to trauma-related disorders. As The Atlantic investigates, first-responders and mental health professionals need help and closure often just as much as those directly involved in tragedy.

Next: Finding this family helped both parties.

5. A man died in her arms, and she found the family on Facebook 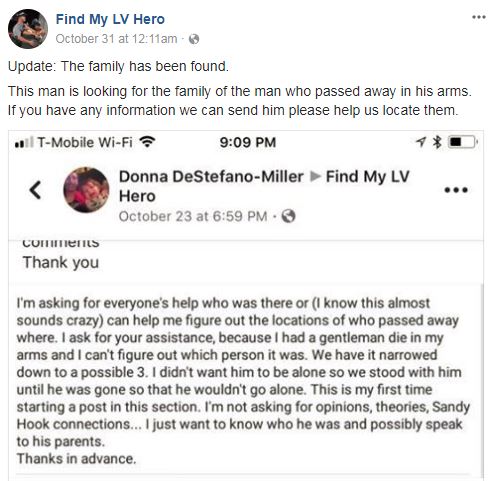 When she found the family, they helped each other. | Find Your LV Hero via Facebook

When a man died in Donna DeStefano-Miller’s arms, she couldn’t stop thinking about him. She took to the Facebook group, which helped her find and connect with his family. Sheryl Sandberg told NPR how that sort of connection also helped her deal with grief after her husband died. “The problem with [avoiding grieving people] is that we then don’t help each other when we most need that help, and I think that’s when we can most come together,” she said. By reaching out to the family that lost the man she helped comfort in his last moments, DeStefano-Miller provided connection and hopefully, some solace.

Next: A heroic photographer reconnected with those he helped save.

6. A photographer got this woman and others to safety 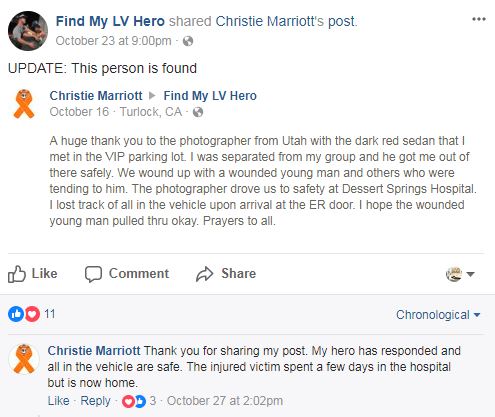 Finding one another can provide much solace. | Find Your LV Hero via Facebook.

For people like Christie Marriott, even witnessing the carnage that took place at the Las Vegas shooting can be traumatic. Experts say it’s OK even if trauma is just beginning to emerge. “In this early time, right after this incredible tragedy has occurred, there are different stages of grief between shock, extreme sadness, perhaps angry that this has occurred,” Donna M. Morrissey, spokesperson for the American Red Cross told ABC News. “That’s all normal.”

Next: Even in pain, she wanted to say thank you.

7. This woman found her heroes even with a wired jaw 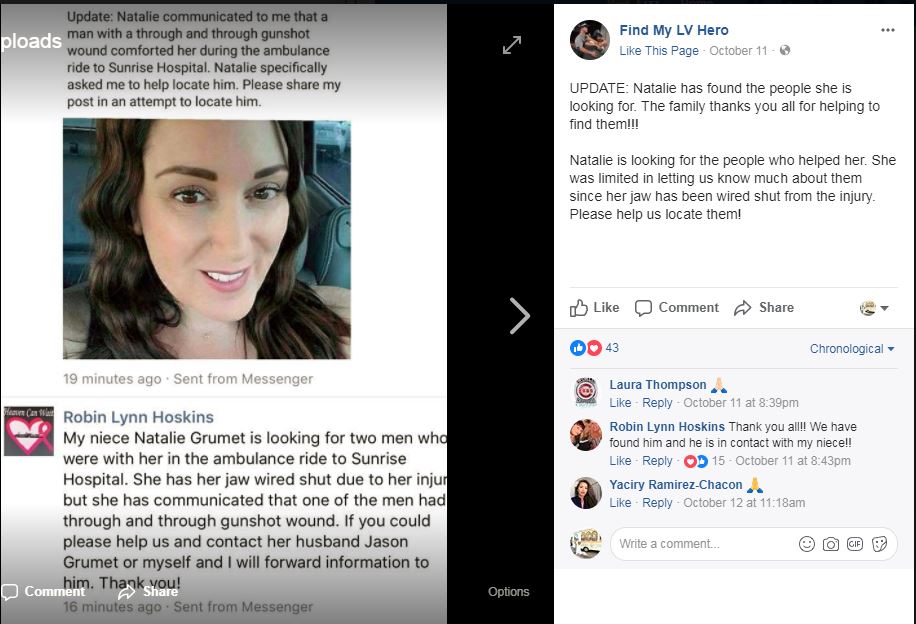 Even through her pain, this woman wanted to say thank you. | Find Your LV Heroes via Facebook

Natalie Grumet wanted to thank the men who rode with her in the ambulance, and the Facebook group came together to help. While the road to recovery can be long for shooting victims, one researcher said there’s good news. According to her blog, severe psychological symptoms tend to be short-lived. “Based on my research, the good news for those exposed to last weekend’s violence is that while many of these symptoms can be severe in the short term, a majority of people are resilient and do not develop psychiatric illness, even after the most extreme exposures.”

Find Your LV Hero continues to locate and connect victims and heroes every day. For those still searching, and those looking to heal, social media can provide a useful resource.