In a deadly rockfall at Yosemite National Park, a chunk described by a witness as “the size of an apartment building” fell of the face of El Capitan on Wednesday. One person was reported dead and another injured as a result, according to a park ranger. 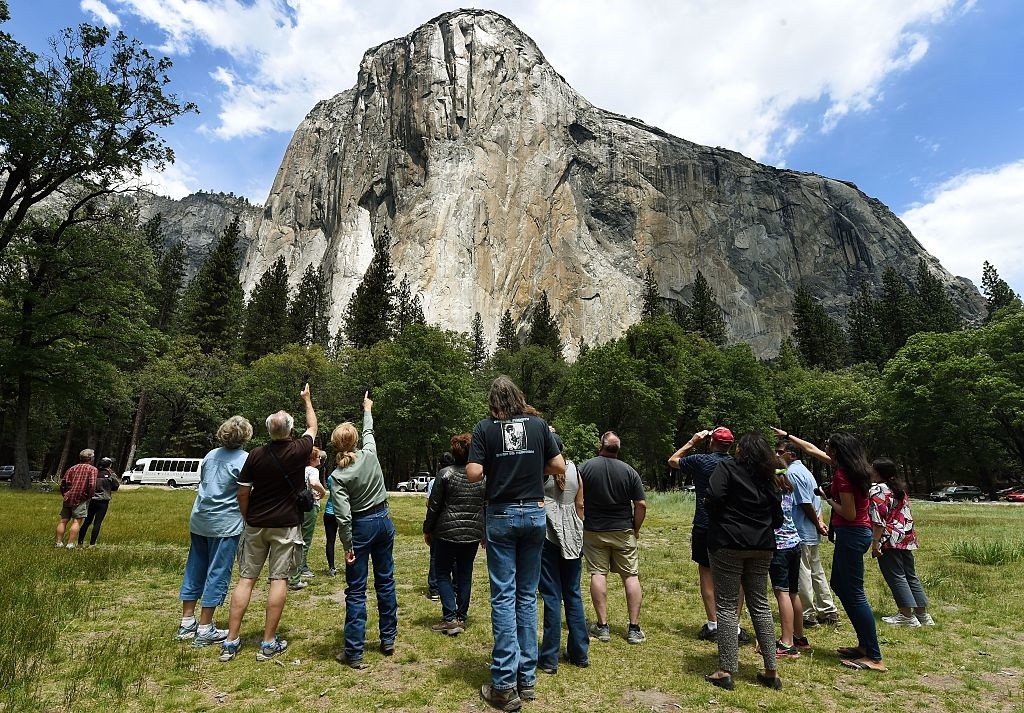 Visitors look up at the El Capitan monolith in the Yosemite National Park in California on June 4, 2015. | Mark Ralston/AFP/Getty Images

The slide occurred just before 2 p.m. on the East Buttress of El Capitan, on the popular Waterfall Route, reported Yosemite Ranger Scott Gediman, who added at least 30 climbers were on the wall at the time the slide happened. Helicopters searched the area for more possible victims.

Canadian climber Peter Zabrok, 57, was scaling El Capitan and was above the rockfall when it occurred, he told Fox News. “I saw a piece of rock, white granite the size of an apartment building, at least 100 feet by 100 feet, suddenly just come peeling off the wall with no warning,”

Jon Kameen witnessed the event and tweeted a stunning photo showing a white cloud of dust. The photo was subsequently picked up by various news outlets. Kameen said he saw the rockslide from Glacier Point at around 1:52 p.m.

Large rockfall off the East Buttress of El Cap in Yosemite. I heard and saw it from Glacier Point at 1:51-1:52pm pic.twitter.com/youAujh3pA

Several witnesses called 911 after the incident. Smaller chunks of rock fell after the larger piece fell. Rescue workers evacuated the victims from the scene.

The names of the victims are still unknown, as well as whether they were climbers or tourists visiting the park. The park remained open after the accident. Currently, Yosemite is in the peak of its climbing season with larger numbers of climbers climbing various routes.

El Capitan, one of Yosemite’s popular tourist attractions, is a 3,000-foot granite rock formation which is a popular challenge among climbers. The summit can be reached by hiking on the trail next to Yosemite Falls. The most difficult aspect of climbing the monolith is its sheer granite face. Among the challenging climbing routes are the “Iron Hawk” and “Sea of Dreams.”