Abortion has always been a tightly contested subject in American culture. Up until the Comstock laws were passed, abortion had been pretty commonplace and uncontroversial in any way. Even the Church didn’t have any problems with them on a federal level. Once we had the landmark Roe v. Wade case heard by the Supreme Court, we thought that we could put the dangerous practice of limiting access to safe abortions behind us. Now, conservatives want to pass the Pain-Capable Unborn Child Protection Act, which would ban abortions after 20 weeks. Here’s what the bill is and why it’s not going to pass in the Senate.

The Pain-Capable Unborn Child Protection Act (or H.R. 36) is a new bill that was just passed in the House of Representatives, and is now on its way to the Senate. What the bill does is limit the number of weeks after conception that a woman can receive an abortion to 20 weeks. Exceptions are made for instances of rape, incest, or when the child poses a threat to the mother’s life. The limit that is currently set varies from state to state, but the average would be around 24 weeks.

Next: Why are conservatives trying to pass this bill?

Why do conservatives want to pass this law?

The motivation behind H.R. 36 is the conservative assertion that it is “scientifically proven” that a child at this stage of gestation feels pain (we will get to that later). The logic goes that if the child can feel pain, it is now a human with rights. Really, it’s just another bill put in place to erode Roe v. Wade, some opponents of the bill say. It’s clear that many conservatives have been trying for years to limit women’s reproductive rights, and it may have also been a key part of the Republican platform when they ran for office.

Next: Can a fetus feel pain that early?

The claim that there is proven science that says fetuses can feel pain at 20 weeks is extremely misleading. The science behind that number is murky at best. In fact, there are some researchers out there who believe that fetuses haven’t even developed a working nervous system by that point in gestation. Furthermore, this 2005 report suggests that the ability to actually feel pain in utero would be closer to the third trimester.

Next: How much will this infringe on women’s reproductive rights?

How does this affect a woman’s right to choose?

A pro-choice advocate (R) holds up a sign as pro-life demonstrators march toward the U.S. Supreme Court. | ANDREW CABALLERO-REYNOLDS/AFP/Getty Images

On the surface, this bill is pretty much just cosmetic and ineffectual when it comes to preventing abortions after 20 weeks. In 2012, the United States had a total 9,090 abortions after 21 weeks. That represents about 1% of all abortions performed. The vast majority of those abortions were for medical reasons, so it would really only affect an extremely small portion of the population. All this really makes you wonder why they’re even trying to rush this through in the first place.

Next: Has the GOP tried this before?

They have tried to pass this bill before and failed

Trying to get an anti-abortion bill across congress is extremely difficult. In 2013, the GOP proposed the same bill that would eventually go on to get struck down. They tried again in 2015, but were unable to garner the 60 votes it needed to pass. Even if they were able to get the necessary 60 votes, President Obama would have vetoed any restrictive legislation pertaining to abortion.

Next: So what’s different about this time around?

Despite having control of the government, conservatives in Congress are in desperation mode right now

Conservatives have a huge advantage right now in controlling all three branches of government, with a Republican in the White House, a majority in the House and Senate, and a conservative majority in the Supreme Court. What was once intended to be a system rooted in checks and balances has now swayed decidedly right in terms of who’s in control.

That being said, it’s been a frustrating year for Republicans, as they’ve struggled to pass any meaningful legislation under the Trump administration. That makes this largely symbolic abortion bill that much more important to their image, as they now just need to get it through the Senate and onto Donald Trump’s desk, where he has already pledged to sign it into law.

Next: But will it pass in the Senate?

The Senate is where anti-abortion bills are aborted

The seal of the United States Senate. | Chip Somodevilla/Getty Images

The Senate has a long history of striking down any anti-abortion bill. Additionally, conservatives (again) do not have the necessary 60 votes they need to be able to pass this into law. The closest they came was in 2015, with a 54-46 vote in favor of the bill. Then, there are the legal protections of a woman’s right to choose covered in the first, fourth, fifth, ninth, and 14th amendments of the U.S. Constitution, as determined by the landmark case of Roe v. Wade.

Next: Wait, why are they even trying if it doesn’t actually do anything?

Is there a separate agenda behind this largely symbolic bill? 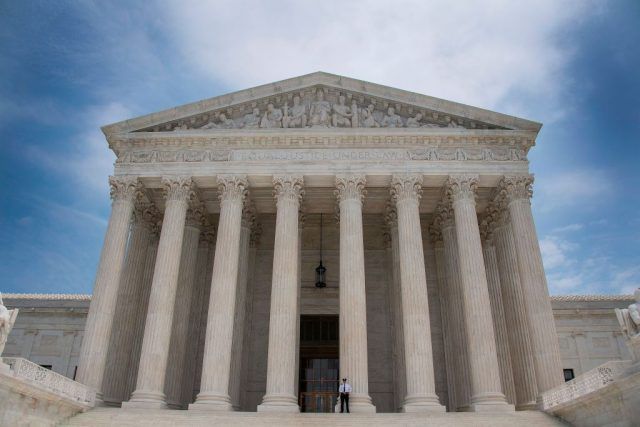 The steps of the U.S. Supreme Court. | JIM WATSON/AFP/Getty Images

There are a couple of reasons we think conservatives want to get this bill through Congress. The first is that they know there is no chance of anything getting done, but they need to tell the people that voted for them and donated money that they tried (thus, why it’s an almost ineffectual law). They could also be staring down the barrel of an incredibly disappointing mid-term election season thanks to Donald Trump’s less-than-popular first year as president.

Another reason is that they may be trying to create a “Trojan Horse” bill. If the bill (somehow) gets passed and the president signs it into law, you are almost certain to get a lot of people who are going to file suit. That would then reopen the Roe v. Wade case, and leave it vulnerable to a challenge in a largely conservative Supreme Court. And while this outcome is purely speculative, it’s still something to keep on the radar as Republicans continue to do what they can to restrict abortions nationwide.