Police discovered the body of a missing child, Texas toddler Sherin Mathews, according to the local NBC affiliate. Her adoptive father, Wesley Mathews, reported her missing on Oct. 7, after he said he placed her outside as punishment for refusing to drink her milk.

On Oct. 23, Mathews went to police and changed his story, telling them he “physically assisted” his daughter in drinking milk. She died after beginning to choke, according to an arrest affidavit. He then told police he removed her body from the family’s home.

Mathews’ case has yet to play out in court. But there is a startlingly large cadre of parents who kill their children — and a lot of research that examines the possible reasons.

1. Parents kill their children more often than you think

Unfortunately, this horrific instance isn’t as rare as you might think. | Spwidoff/iStock/Getty Images Plus

A study in the journal Forensic Science International looked at three decades worth of filicide — or child killing — cases (between 1976 and 2007) and found they occurred about 500 times a year in the United States. Almost 72% of those killed by their own parents were 6 years old or younger and one-third of the victims were just babies under 1 year old.

While mothers killing their children get a lot of press time, moms represent 40% of the killers, while fathers make up 57%. Cheryl Meyer, co-author of several books on the subject, told CNN that a mother kills a child somewhere in the U.S. once every three days. There’s a reason why we read more about mothers killing their kids — we’ll get to that next.

Next: Mom killers are particularly interesting.

2. Moms who kill make it into the news for this reason

According to The Telegraph, we find woman killers particularly interesting. Austrian forensic psychiatrist Sigrun Rossmanith said that women actually make “better” killers. “They are not as vicious as men. But they are more determined, more flexible, and resourceful and more patient,” she said. “Everyone has a mother who has brought them into the world. The idea that this mother could also kill is unimaginable and terrifying.”

For forensic psychologist Anna Motz, this explains why female suspects are often sensationalized in the media. When women kill, Motz said, they betray society’s idea of gender but also an unspoken concept of motherhood. “The typical image of the female killer links her with a kind of sexually depraved immoral beast, to the extent that she is seen as wholly monstrous, outside of the realm of humanity and motherhood altogether.”

Next: Experts have found several reasons for why parents might kill their children.

Here’s why parents may kill their own children. | Tatyana Tomsickova/ iStock/Getty Images Plus

Forensic psychiatrist Phillip J. Resnick, a pioneer in the study of filicide research, identified five major reasons why parents kill, CNN found. The first is altruism. The parent kills the child because he or she believes it to be in the child’s best interest. Often, it precedes the parent’s own suicide. Parents may also kill during an episode of acute psychosis, when they lose touch with reality. They also kill unwanted children, particularly in the case of neonaticide — when parents kill babies in the first 24 hours of life. Accidental death as the outcome of abuse — a possibility in the Mathews case — also represents a portion of these killings. And finally, parents sometimes kill out of spousal revenge.

Resnick said mothers or fathers tend to kill for different reasons. He told CNN that young, unmarried women who do not have a major mental illness and do not want their children often commit neonaticide. In 1997, for example, New Jersey teen Melissa Drexler made national news after she gave birth in a bathroom stall at her prom and disposed of the newborn in a trash can.

Next: Here’s how good mental health is crucial.

Those who kill their children are certainly not mentally healthy. | Shironosov/iStock/Getty Images

According to The Daily Beast, no completely mentally healthy parent could kill a child. Sandra Wheatley, a British psychologist specializing in family psychology, pointed out the choice represents a conscious decision difficult to classify as healthy. “The fact is, when somebody decides to end the life of a child, whether they are just born, or whether they have been around for longer — that is still a decision they weigh up, with the pros and cons,” she said. “It is very hard for most of us to understand how somebody could weigh up the evidence and come up on the side of death in that scenario, and consider that as the best outcome to act upon.”

She added, “You don’t need a degree in psychology to work out that something in their thought process was not logical. In order to think that this could be a way to behave, you have got to say that somewhere in there, they were not quite well.”

The types of killings parents commit do vary by gender, experts found.

Next: How mothers make a statement when they kill.

5. Mothers make a statement by the way they kill

Mothers who don’t have the resources to raise their child may resort to killing. | iStock.com/shironosov

Resnick said social issues, such as the fear of being stigmatized, play a definitive role in neonaticides. In some contexts, the need to allocate resources can motivate killers.

“If the circumstances are such that someone does not have the finances, or the wherewithal to raise a child, they may kill that child — that is a social problem in contradistinction to a psychiatric problem,” he explained.

A case in France made headlines in 2010, when Dominique Cottrez, then 45, confessed to killing eight of her newborn babies and hiding their bodies in the house she shared with her husband in a village near Lille.

These cases remain in the public eye, often for their lurid fascination.

Next: Similarities exist in these cases.

6. Similarities exist in cases where moms kill their kids 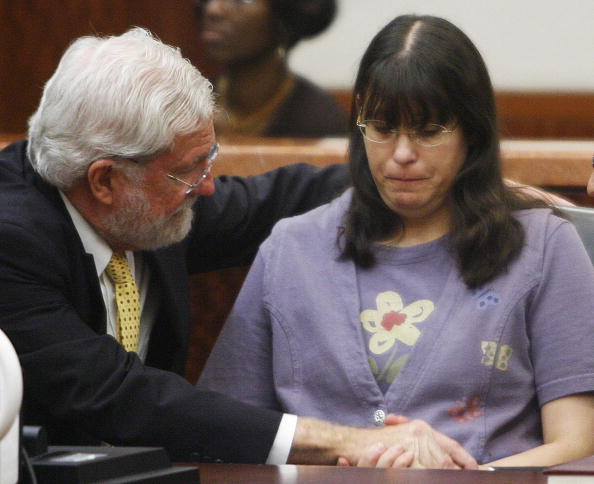 Andrea Yates sits with her attorney after the “not guilty by reason of insanity” verdict. | Brett Coomer-Pool/Getty Images

As Broadly pointed out, several infamous cases still linger in the public consciousness. Even though the crime occurred two decades ago, talk show host Nancy Grace still brings up Susan Smith. The South Carolina mother reportedly pushed her car into a lake with her two sons in the back seat. Florida mother Casey Anthony’s case created public hysteria after courts found her not guilty of the death of her toddler, Caylee. She had allegedly drugged her with chloroform and suffocated her by taping duct tape over her nose and mouth.

In 2002, the public became obsessed by Texas mother Andrea Yates. She reportedly drowned her five children in the bathtub in a religiously motivated postpartum psychosis. In 2005, China Arnold reportedly put her baby in the microwave and “cooked” her. She reportedly did so because she feared her boyfriend leaving her. The same year, Rebekah Amaya told investigators a spider told her to drown her two children. Courts found her not guilty by reason of insanity.

“Neonaticidal behavior is [more] often influenced by relatively intangible factors … [Those include] emotional isolation and perceived lack of resources than by stereotypical indicators like race or financial standing,” Meyer and Michelle Oberman wrote. Their book, Mothers Who Kill Their Children: Understanding the Acts of Moms from Susan Smith to the “Prom Mom,” explores the phenomena.

Next: Here’s how fathers commit different types of homicides than mothers.

Statistically speaking, fathers present the most danger to their family. | iStock.com/monkeybusinessimages

According to an Australian study, the most violent of all parents who kill their children is the stepfather or de facto partner. The study, conducted by researchers at Swinburne University in Melbourne, found that this type of perpetrator will often throw or stomp a child, but usually only one. Researchers said the coupled father represents the most deadly of all parents. He often kills not just his children but the mother, as well.

“The de facto male kills in a particularly violent way,” said study leader Lillian De Bortoli. “He inflicts multiple abdominal injuries, and head and spinal injuries … [The father] has usually been abusing the child for some time before he kills them.”

The separated father often kills multiple children, usually in a revenge killing to punish their mother. In these cases, women often separated from them because of past abuse.

“The little ones often suffer head or spinal injuries,” said study leader Lillian De Bortoli. “There are [also] cases in which the parents has used carbon monoxide poisoning.”

Next: Given what we know about parents killing their kids, experts wonder what we can do.

8. Can we prevent these children’s deaths?

Something must be done to protect children in the future. | iStock.com

A 1995 report from the National Center for Biotechnology Information reported that “neonatal homicide rates were lower in the 10 years following Roe vs. Wade.” It also found that neonaticide exists proportionally higher in rural areas, where abortions could be less socially acceptable or available. “We live in a society in which abortion is legal, but infanticide remains an unthinkably horrible crime,” Meyer and Oberman said. “We stress the importance of access to safe, affordable, and private abortions.”

CNN pointed out that efforts to head off deaths have included the passage of safe haven laws. These allow parents to surrender infants anonymously to state custody without legal repercussions. The challenge remains in addressing the risk factors of killing children in a varied population. While mental health warning signs can exist, they don’t always. But De Bortoli said people who come from traumatic backgrounds need more support.

“We need more support for kids who have been abused, who … may end up on the street or in the criminal justice system,” she said. “People who kill their children may have personality disorders, or their empathy is not well developed. This occurs in people who have been abused as children or may have had a traumatic childhood.”