If you’re like most Americans, you’ve heard of Billy Graham. The iconic American pastor counseled a dozen presidents and became the nation’s best-known TV evangelist, according to The New York Times. But what you may not know about the late evangelist is that he had a major impact on one of the most famous Christian families currently in the spotlight: Chip and Joanna Gaines.

Read on to discover the surprising impact that Billy Graham had on Chip and Joanna and their faith.

1. Billy Graham used radio and TV to spread his message, including to Chip’s mother

The New York Times reports that Billy Graham was able to influence many Americans, not just the Gaineses. Graham’s wide reach came thanks to his shrewd use of radio, television, satellite transmissions, and videos to spread his message. Graham encouraged evangelical Protestants to reclaim the social influence that they had once wielded. And he used his global reach to preach that everyone can repent of their sins, accept Jesus as their savior, and be born again.

But interestingly enough, Graham didn’t speak for a particular church. And at times, he “seemed to fill the role of national clergyman.” Graham even advised a dozen presidents. And as we explain on the next page, his message also reached Chip Gaines’s mother.

Next: Chip’s mother attended this event.

2. Chip traces his faith back to one of Billy Graham’s ‘crusades’

Chip credits Billy Graham with laying the foundation for his faith. | HGTV

She had been baptized at the age of 8. But according to Chip, she “decided to go forward to answer the invitation to believe.” As Chip explains, Graham’s “simple sermons brought people from all denominations and churches.” Chip added, “whenever they extended an invitation to believe, attendees would swarm to the front.”

Next: Chip’s parents made this change after the crusade.

3. Chip’s parents made it a priority to go to church

Chip remembers his parents going to church often when he was young. | Chip Gaines via Instagram

Chip reports that after his mother attended Billy Graham’s event, she and Chip’s father “made attending church a priority.” According to Chip, that strengthened their marriage. Chip’s parents also got involved in a young couples’ Sunday school class.

And in the 1990s, his mother worked at Word Publishing. The company published books for Billy Graham. Chip says, “She found continued encouragement in his writing.” And presumably, she passed what she learned on to Chip.

Next: A member of Billy Graham’s family personally mentored Chip.

The Billy Graham Evangelistic Association reports that “While Billy Graham set the spiritual trajectory of Chip’s life, it was another Graham family member who personally mentored him in living out his faith.” Danny Lotz, Billy Graham’s late son-in-law, ended up mentoring Chip. Chip attended Baylor University, as did Lotz’s children.

Chip characterized Lotz as “influential in showing me how to live out my faith, even in a secular environment.” Chip added, “I learned so much from him, and he always spoke so highly of (Billy Graham), who he said talked the talk and walked the walk. So, to this day I think about talking the talk and walking the walk because of Billy Graham and Danny Lotz.”

Next: Many Americans love this about Chip and Joanna.

5. Many people love Chip and Joanna for their faith

Many Americans tune in to Fixer Upper for Joanna’s covetable sense of design. (And, of course, Chip’s lovable sense of humor.) But many of them stay because they appreciate how Chip and Joanna prioritize their family, and center their marriage and their family around their faith.

Joanna Gaines has often explained that she and Chip have trusted God with their dreams. “This trust brought peace, although my circumstance hadn’t yet reflected his promise,” Joanna noted. “His Word doesn’t return void, and God was working in my heart to establish deeper levels of trust that I now look back on and am thankful for.”

Next: The couple’s views align with Billy Graham’s on this issue.

6. Chip and Joanna seem to have learned a thing or two about marriage from Billy Graham 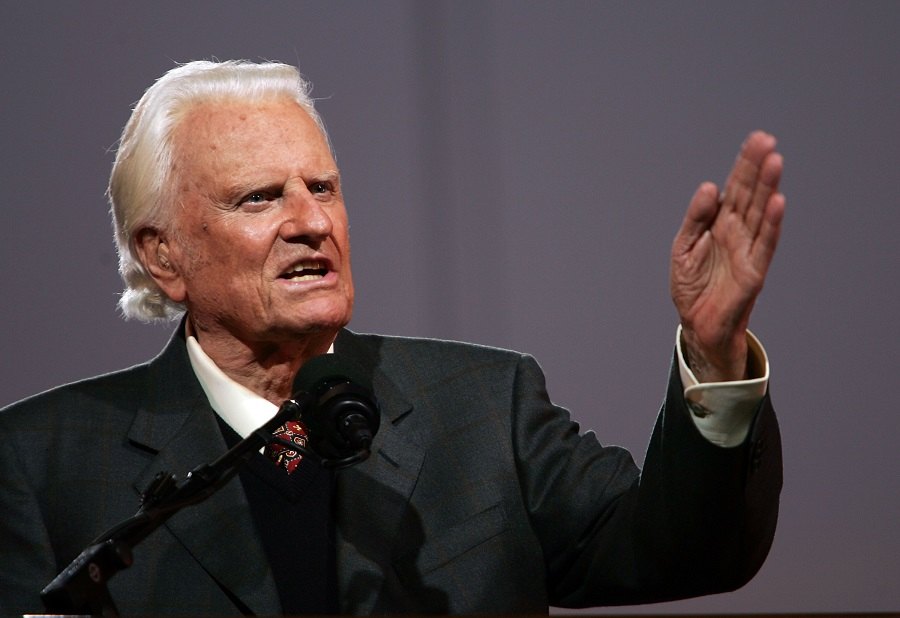 Chip and Joanna have also talked about their marriage. In fact, Chip once told Country Living of Joanna, “She has my back. And I have hers — in all things.” Fox News compared that quote to some advice given by Billy Graham. Graham characterized himself and his wife as “happily incompatible.” He said, “If two people agree on everything, one of them is unnecessary.”

But Graham believed that when doing the hard work of building a healthy marriage, you should put God at the center of your relationship. He said, “God can help you begin to rebuild your marriage and your life if you will let Him rule in your life.” As Fox News notes, Chip said that in his life with Joanna, “we will always choose our family. We will always choose our marriage no matter what the opportunity, and the ‘Fixer Upper’ conclusion is a decent example.”

Next: This part of the Gaineses’ faith caused a big controversy.

7. But their church has also become a point of controversy

Chip and Joanna Gaines attend a non-denominational church. And Billy Graham would likely approve. Graham wrote in one of his many books, “In heaven, there will be no sectarian worship, no denominational differences, no church creeds.” Graham added that he “was brought up as a Presbyterian and later became a Baptist. But in later years I have felt that I belong to all churches.”

Chip and Joanna do attend a non-denominational, evangelical church. But their church recently became a point of major controversy. BuzzFeed reported on the pastor’s hard-line stance against same sex marriage. The publication also reported on his support of “conversion therapy” for LGBT people. The coverage ignited a major debate over whether it matters what church Chip and Joanna attend and how their views align or don’t align with their pastor’s.

Next: Chip and Joanna responded very deliberately to the whole scandal.

8. Chip and Joanna refused to comment on the debate

The Gaineses decided not to share their views. | HGTV

The controversy over their church dominated conversations among Fixer Upper fans and critics alike. But Chip and Joanna ultimately never made a definitive comment on the issue of same-sex marriage. As Snopes notes, “neither Chip nor Joanna Gaines has gone on record for or against gay marriage.” People assume that the Gaineses believe one thing or another. But they haven’t shared their views.

Instead, Chip wrote in a post on Joanna’s blog, “Joanna and I have personal convictions. One of them is this: we care about you for the simple fact that you are a person, our neighbor on planet earth. It’s not about what color your skin is, how much money you have in the bank, your political affiliation, sexual orientation, gender, nationality or faith.” He added, “We are not about to get in the nasty business of throwing stones at each other, don’t ask us to cause we won’t play that way.”

Next: They may have learned this from Billy Graham.

9. Billy Graham kept his distance from political debates, like Chip and Joanna 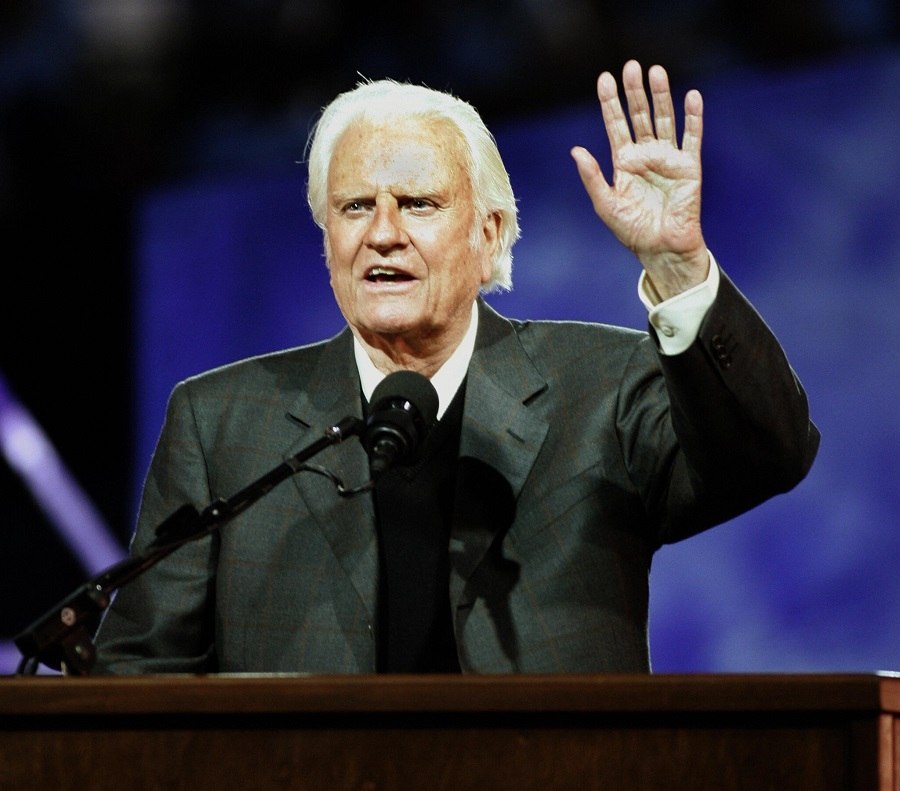 Chip and Joanna may have decided to avoid the debate over same-sex marriage thanks to the example of Billy Graham. As The New York Times explains, Graham “kept his distance from the evangelical political movement he had helped engender, refusing to endorse candidates and avoiding the volatile issues dear to religious conservatives.”

That included the issues of homosexuality and same-sex marriage. Graham seems to have regarded both as sinful. But he rarely spoke about either. Graham once said in an interview, “If I get on these other subjects, it divides the audience on an issue that is not the issue I’m promoting. I’m just promoting the Gospel.”

Read more: Thoughts We All Have While Watching HGTV’s ‘Fixer Upper’