How Destroying Your Keurig Became the Worst Protest Ever

Fox News’ Sean Hannity stuck his foot in his mouth again, when discussing allegations against Alabama Senate candidate Roy Moore. This time, coffeemaker giant Keurig is taking the fall for it — literally. The Washington Post reports that Hannity alluded to Moore’s alleged relationships with underage girls as “consensual.”

Keurig, as well as at least four other companies, responded by pulling their advertising. Hannity’s followers responded in a very bizarre way.

The GOP protests by destroying their own property 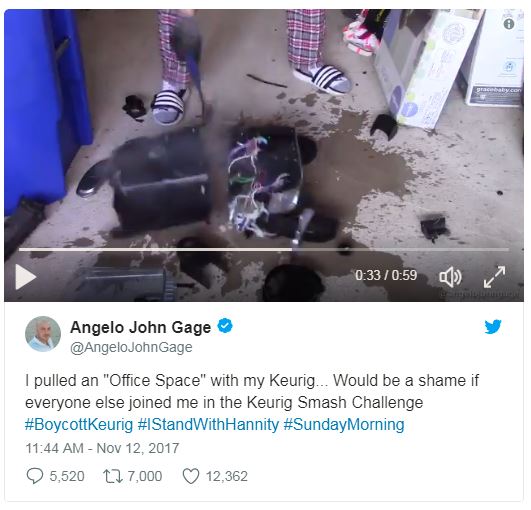 This guy decided to boycott Keurig by smashing a machine he already bought. | Angelo John Gage via Twitter

Over the weekend, Hannity fans posted videos destroying their Keurig coffee machines and encouraging others to join them. The hashtag #BoycottKeurig began trending as they took out their rage on machines they’d already purchased.

One man smashed a Keurig coffeemaker with a golf club, another pounded his with a hammer, and another dropped his Keurig from a second-story balcony. While Keurig has yet to comment, Hannity sure did.

Hannity says he misspoke, but rides the media wave 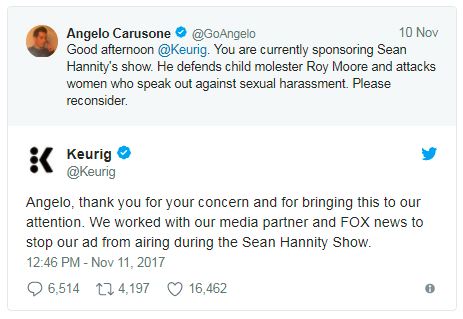 Keurig tweeted about its ad decision shortly after the incident. | Angelo Carusone via Twitter

“That one line was absolutely wrong,” Hannity said. “I misspoke.” After that line though, he continued the TV show by calling into question the credibility of sexual harassment accusers, perpetuating the myth that women often lie about their allegations.

The New York Times reports that Hannity responded to the videos on Sunday, calling them “hilarious.” He also pledged to give away hundreds of coffee makers. The host evidently didn’t feel penitent enough to focus on his words, and chose to capitalize on the reactions.

It’s not the first time Hannity’s come under fire 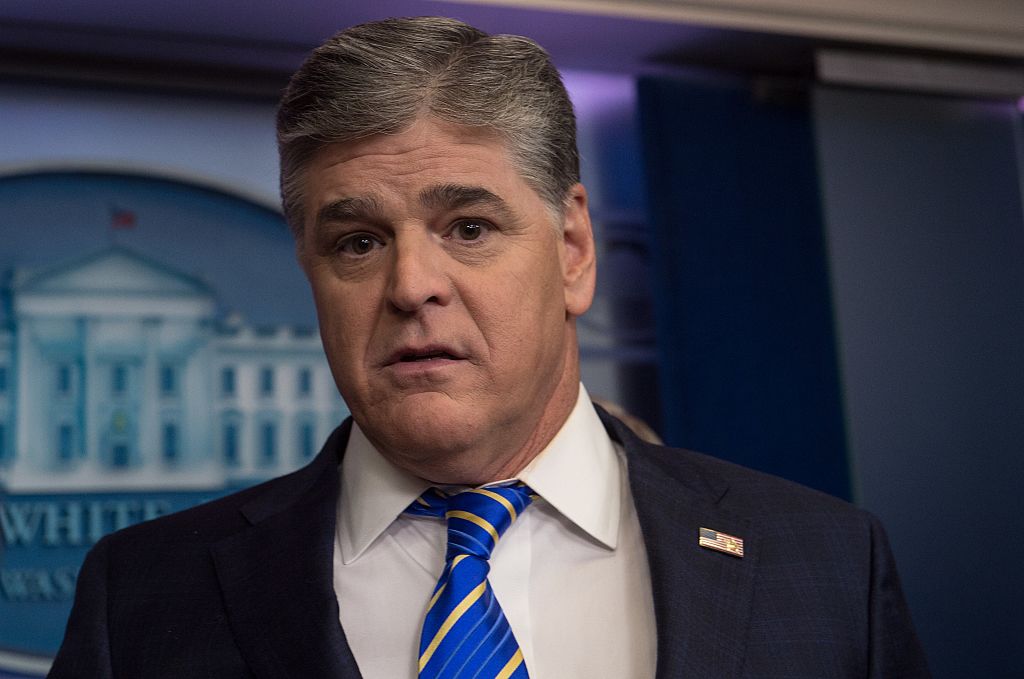 Sean Hannity has found himself in hot water over his comments before. | Nicholas Kamm/AFP/Getty Images

According to Fortune, over the past several months, Hannity’s show lost at least half a dozen advertisers. His controversial reporting on conspiracy theories about Democratic National Committee staffer Seth Rich’s murder and the white supremacist rally in Charlottesville went over poorly with advertisers, earlier this year.

Hannity’s speaking out in favor of alleged pedophilia and the coffee company’s refuting it sparked protests against Keurig The virality of the hashtag comes as no coincidence, and doesn’t necessarily indicate the strength of the movement.

The reason the tweets went viral makes use of a familiar phenomenon. | Geraldine via Twitter

#BoycottKeurig trended on Twitter over the weekend, but the success of the hashtag and boycott campaign come from a source we’re hearing a lot about lately.  Russian accounts linked with efforts to influence American politics also jumped on the anti-Keurig bandwagon. According to a German Marshall Fund tracker, #BoycottKeurig showed as the number one trending hashtag among 600 Russia-linked accounts.

For the Vermont-based coffee pioneer, protests against the brand don’t come as total news. A video that went viral in 2015 started a similar trend, but without the political bent.

The latest protests aren’t even original 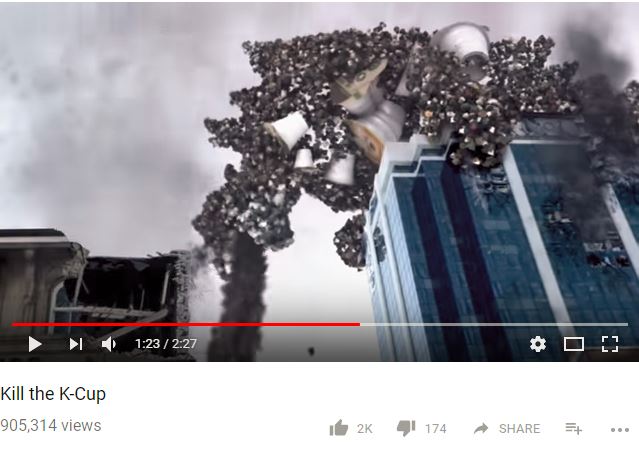 The video depicted K-Cups as destroying the world, literally. | Kill the K-Cup via YouTube

The Atlantic reports that a video titled “Kill the K-Cup” started making its way around the Internet in January 2015. The apocalyptic video criticizing K-Cups and their inability to get recycled spread quickly, and spawned a hashtag #KillTheKCup.

Imitators posted videos of themselves throwing their Keurig machines out of windows or bashing them with baseball bats. While Keurig pledged to make its K-Cups recyclable by 2020, they continue angering environmentalists today. That movement might have provided some inspiration for Hannity’s fans this time around.

Even Keurig’s inventor doesn’t have one 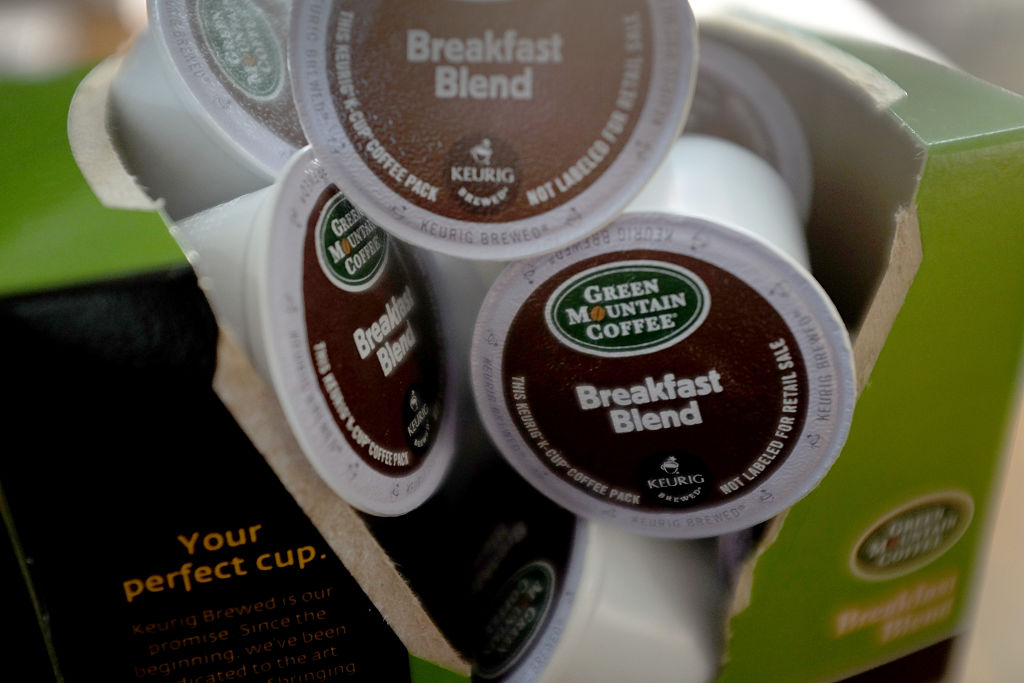 If the inventor doesn’t use it, that tells us something. | Joe Raedle/Getty Images

The irony of destroying an environmentally unfriendly machine to upset “liberals” is not lost on the Internet. The coffeemakers have sparked controversy since they came out in 2010. Even inventor John Sylvan admits their problems. He told The Atlantic “I feel bad sometimes that I ever did it.

“I don’t have one. They’re kind of expensive to use,” he said. “Plus, it’s not like drip coffee is tough to make.” For those who destroyed their Keurigs and still want a hit of caffeine, there is an answer. 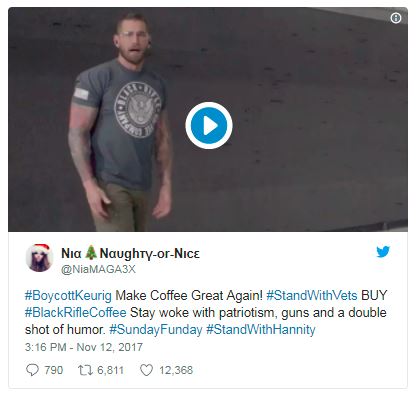 Buzzfeed explains the company, owned by Iraq and Afghanistan veteran Evan Hafer exists “to provide a high-quality, roast-to-order coffee to the pro-2A and veteran communities.” Its tagline on Facebook is “Because hipsters didn’t invent coffee.” Both Hannity and Donald Trump retweeted Black Rifle’s tweet about “making coffee great again.” Looks like coffee crosses the aisle more than we thought.