Hurricane Nate has weakened back to a tropical storm Sunday morning after the storm made landfall twice, in Louisiana and Mississippi. As a Category 1 hurricane, Nate made landfall in Louisiana near the mouth of the Mississippi River around 7 p.m. CST Saturday and then near Biloxi, Miss. shortly after midnight local time Sunday. 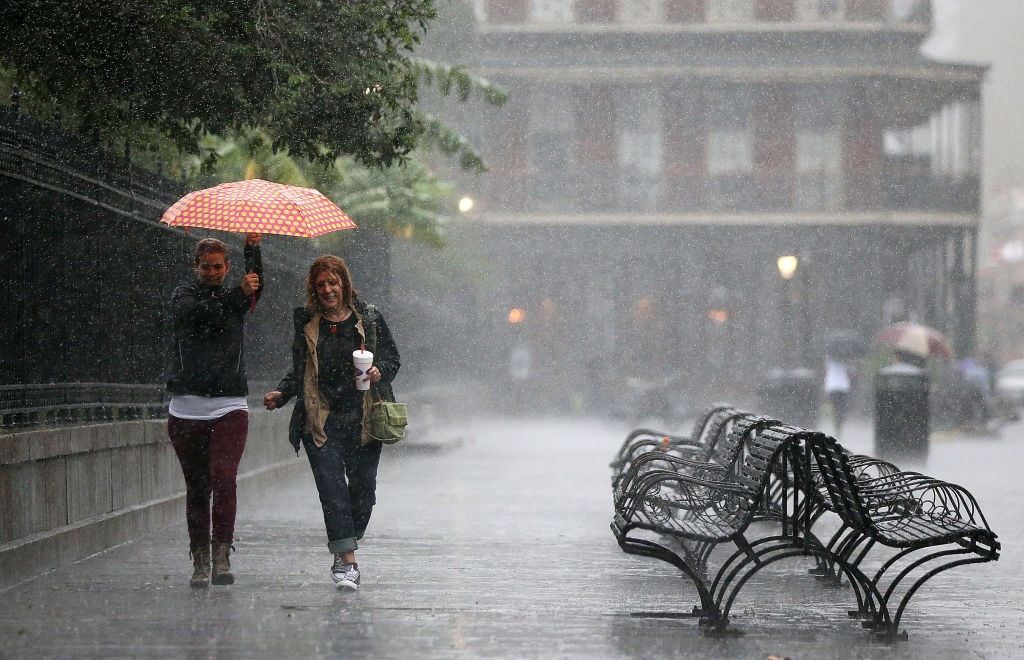 People walk through the rain as Hurricane Nate begins to come ashore on Oct. 7, 2017 in New Orleans. | Sean Gardner/Getty Images

When the storm hit Biloxi, it caused flooding and power outages. It was the first hurricane to make landfall in Mississippi since Hurricane Katrina hit in 2005. More than 28,000 power outages were reported in the southern part of the state, in Harrison, Jackson, and George counties.

At high tide in Biloxi at midnight, Nate’s storm surge pushed over U.S. 90, a highway running along the beach, and moved onto the peninsula on the eastern edge of the city.

The storm surge flooded the parking structure of the Golden Nugget casino, near the eastern most part of the peninsula, as seen here:

Praying for everyone in #HurricaneNateِ 's path. The storm surge is devouring this parking garage in Biloxi! pic.twitter.com/qtfJpwAfaF

New Orleans, being located further west, was spared from the worst of the storm. The city had been under a hurricane warning which was lifted around 7 p.m. EST.

Areas further to the north will likely be affected by the storm in coming days. “Nate’s center will continue to move inland over Mississippi and across the Deep South, Tennessee Valley, and central Appalachian Mountains through Monday,” according to the National Hurricane Center’s early Sunday advisory.

Prior to reaching the United States, Hurricane Nate caused devastation in Central America, as at least 28 people were killed Thursday in Costa Rica, Nicaragua, and Honduras. Floodwaters rose and mudslides occurred, from which hundreds were rescued. Many areas were without power and running water.