These Are the Best Hypoallergenic Cat Breeds for People With Allergies

Do you have allergies? Then you might start sneezing when you even think about getting a pet. But even if you live in fear of an itchy throat, watery eyes, or a runny nose, fear not! You still have a chance at bringing home a pet without problems. Just as some of the easiest dog breeds to own won’t aggravate your allergies, some of the cat breeds you probably long for are actually pretty well-suited to allergy sufferers. Did we mention that these hypoallergenic cats are pretty adorable, too?

We’d be lying if we told you there wasn’t a caveat. Even a hypoallergenic cat comes with no guarantees about how you and your allergies will react. But the hypoallergenic cat breeds ahead do shed less, or have less of the most common allergens, in their saliva and dander. Below, check out the best hypoallergenic cats you should consider. 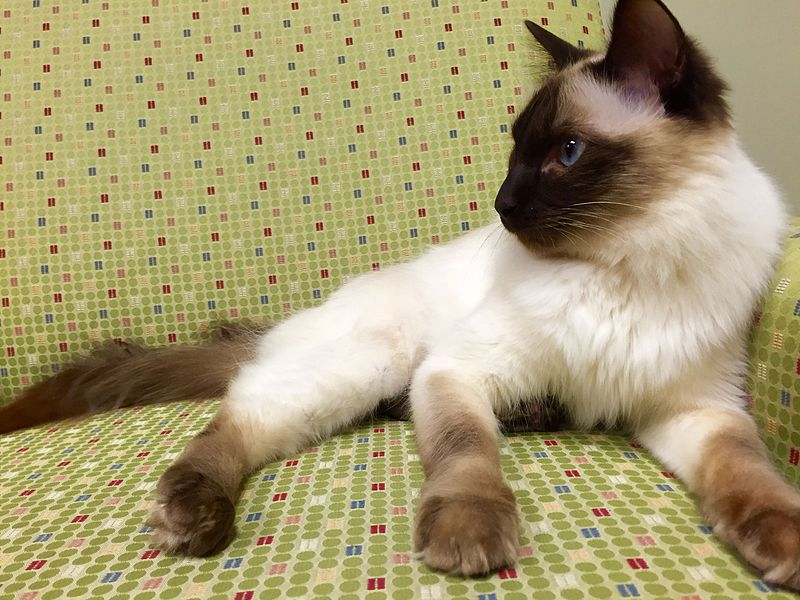 They have a lower concentration of the Fel d 1 protein. | Talophex/Wikimedia Commons

The Balinese still sheds and produces saliva, like any other cat. But according to iHeartCats, this breed has a lower concentration of Fel d 1 protein in its saliva and dander. People with cat allergies typically react to Fel d 1 when they spend time with a cat. You might think that you react to cat hair, but you’re actually reacting to compounds in the cat’s skin oils or saliva. Nonetheless, if you suffer from a cat allergy, you’re less likely to react to a Balinese than to other kinds of cats.

Next: These cats don’t groom themselves often. 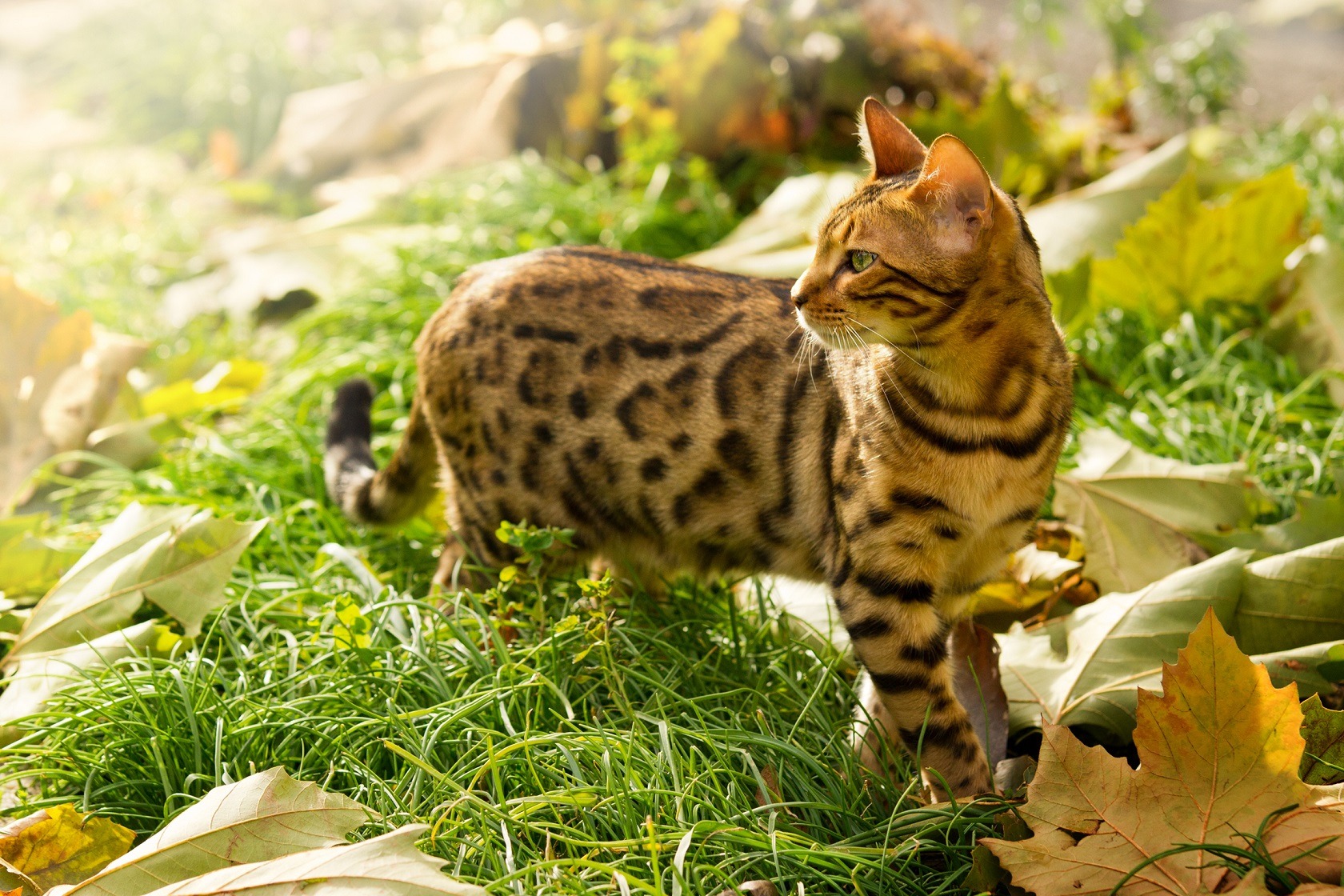 Their fur is less likely to cause issues. | andreaskrappweis/iStock/Getty Images

Everybody loves Bengal cats for their beautiful looks. (They came about by breeding a domestic cat with an Asian Leopard cat, and you can definitely tell by looking at a Bengal!) iHeartCats reports that there’s another reason to love the Bengal. This breed numbers among the hypoallergenic cats you can safely consider if you or somebody in your household suffers from allergies. As Mom.me reports, that’s because Begnals have fine fur. Bengals don’t groom themselves as often or for as long as other cats. So their fur contains less allergen-rich saliva. Plus, they don’t shed as much as other cats, so the dander in their fur doesn’t spread as much as it would with other cats.

Next: This people-oriented cat breed acts like a dog. 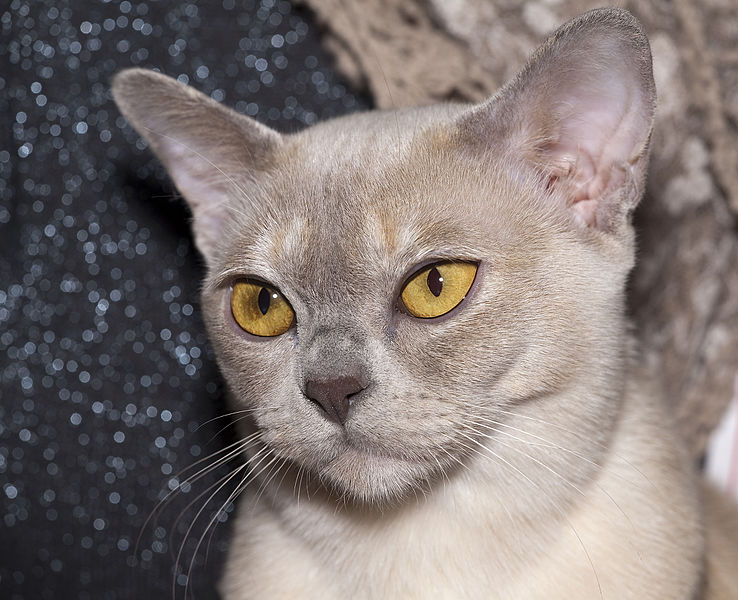 iHeartCats reports that the Burmese should also make your shortlist if you’re searching for hypoallergenic cat breeds. PetMD, which recommends the Burmese for allergy suffers looking for hypoallergenic cats, characterizes these cats as “extremely people-oriented.” In fact, according to the publication, “They are almost dog-like in their tendency to follow their owners to give and receive affection. In fact, many Burmese even learn to play fetch.” 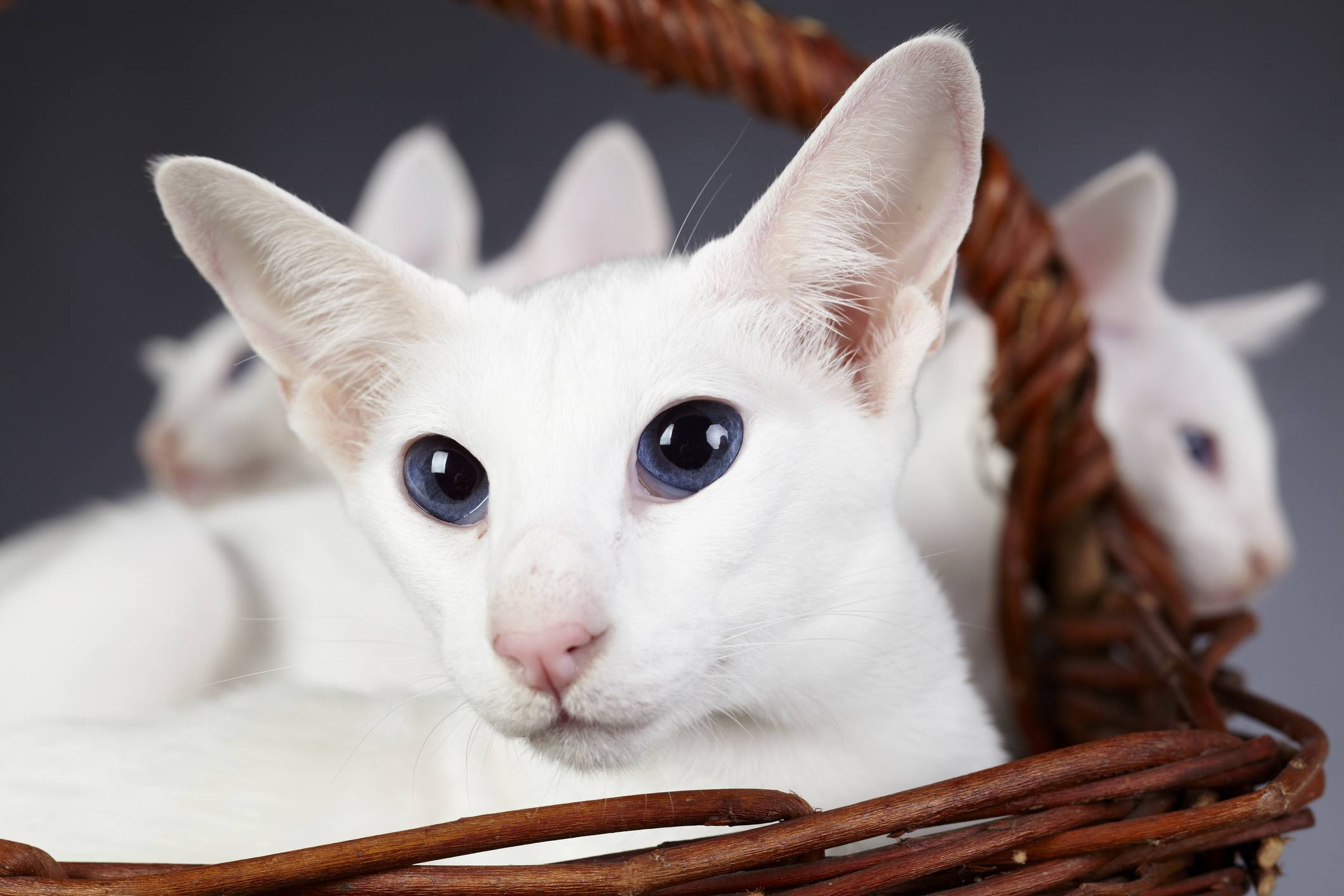 Another breed related to the Siamese. | Celiaaa/iStock/Getty Images

Next up on the list of hypoallergenic cat breeds? The colorpoint shorthair. iHeartCats reports that this breed is related to the Siamese. But unlike the Siamese, these hypoallergenic cats have more than 16 “point” colors. (Siamese have just four.) PetMD puts the colorpoint shorthair on its short list of hypoallergenic cat breeds. The publication also reports that this breed, like its cousin the Siamese, “is a born extrovert.” These cats make friends easily. They chatter persistently. Plus, they show deep affection for their owners, and become quite sensitive to their humans’ moods.

Next: Many allergy sufferers don’t react at all to this cat breed. 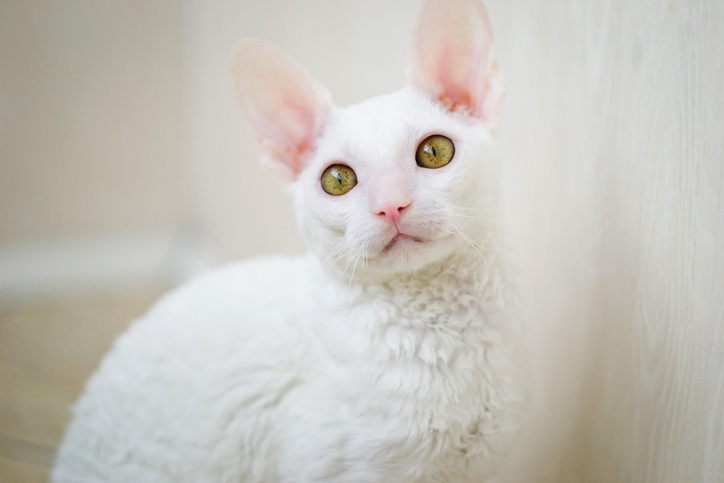 Take one look at the Cornish Rex’s fancy, curly coat, and you’d probably assume that allergy sufferers should run the other way. But iHeartCats reports that this breed actually numbers among the hypoallergenic cat breeds that you should consider. Mom.me reports that while most cats have three types of hair — an outer layer of guard hair, a middle layer of awn hair, and an undercoat called the down hair — Cornish Rexes only have the soft undercoat.  The upshot? These cats shed very little of their hair. So allergy sufferers experience only mild reactions to the Cornish Rex, if they react at all. 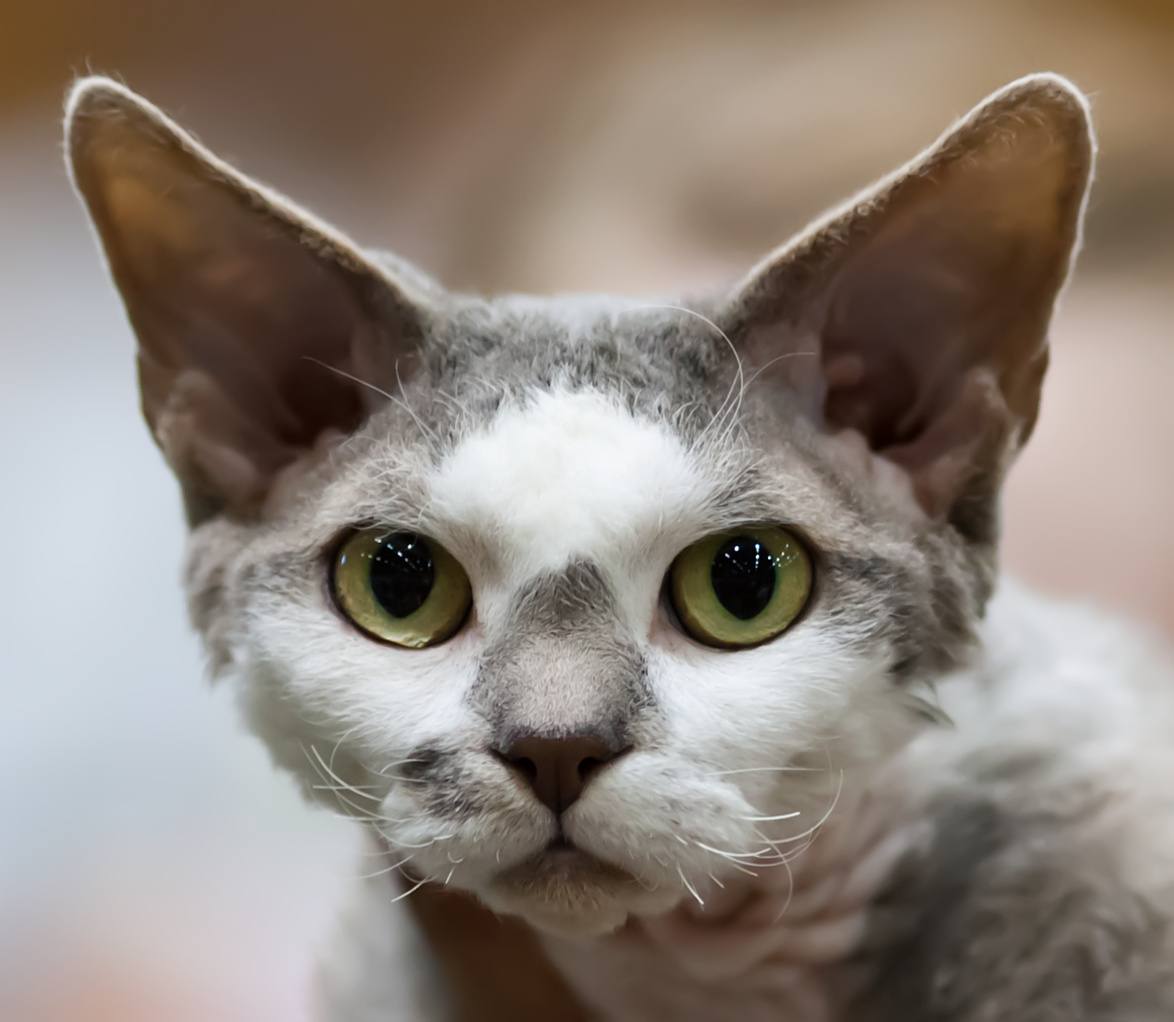 The Devon Rex, like the Cornish Rex, has a distinctive curly coat. And this breed, too, yields hypoallergenic cats that you may be able to take home with no allergic reactions. Mom.me notes that the Devon Rex has soft, fine down hair, and little to no top coat. Just like the Cornish Rex, these hypoallergenic cats shed very little hair. In fact, Devon Rexes have even less hair to shed than Cornish Rexes, which makes them a great match for potential cat owners who don’t want to deal with a ton of cat hair.

Next: This cat may not cause an allergic reaction at all. 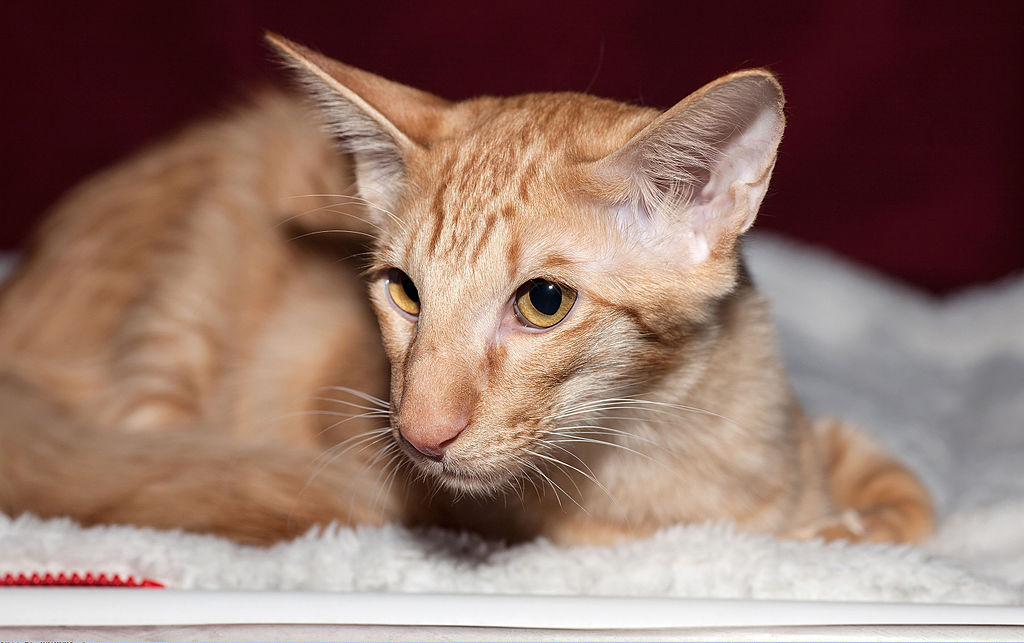 Next up on the list of hypoallergenic cat breeds? The Javanese. Mom.me reports that, just like the Cornish Rex and Devon Rex, the Javanese has only one of the three layers of hair that most cats have. That one coat translates into less hair and less shedding — plus less dander spreading around your house. According to iHeartCats, this breed isn’t officially recognized by every cat association, since it’s “basically a long-haired version of the colorpointed shorthair.” But, like colorpointed shorthairs, these hypoallergenic cats may not cause a reaction in people who suffer from allergies.

Next: These hypoallergenic cats have a very distinctive coat. 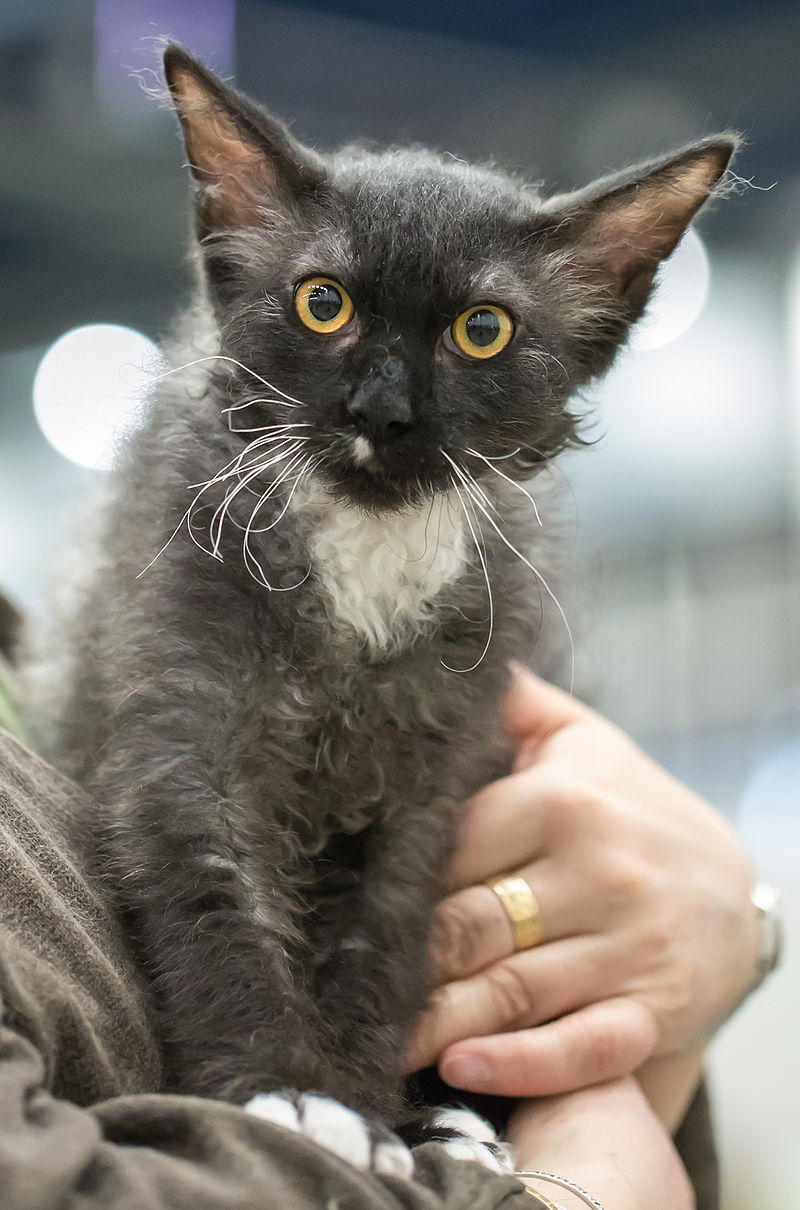 Another cat with a unique coat? The LaPerm cat, which has a curly coat. Mom. me reports that some experts think the nature of this cat breed’s coat account for the reduced allergic reaction that many allergy sufferers report. LaPerms shed much less than most other cat breeds. Plus, it’s thought that the curls in their coat help keep their dander from spreading. According to the Cat Fanciers’ Association, these cats are “gentle and affectionate but also very active.” (That sounds like the perfect balance for someone who wants a cat who will take an interest in what’s going on, but still go with the flow.) 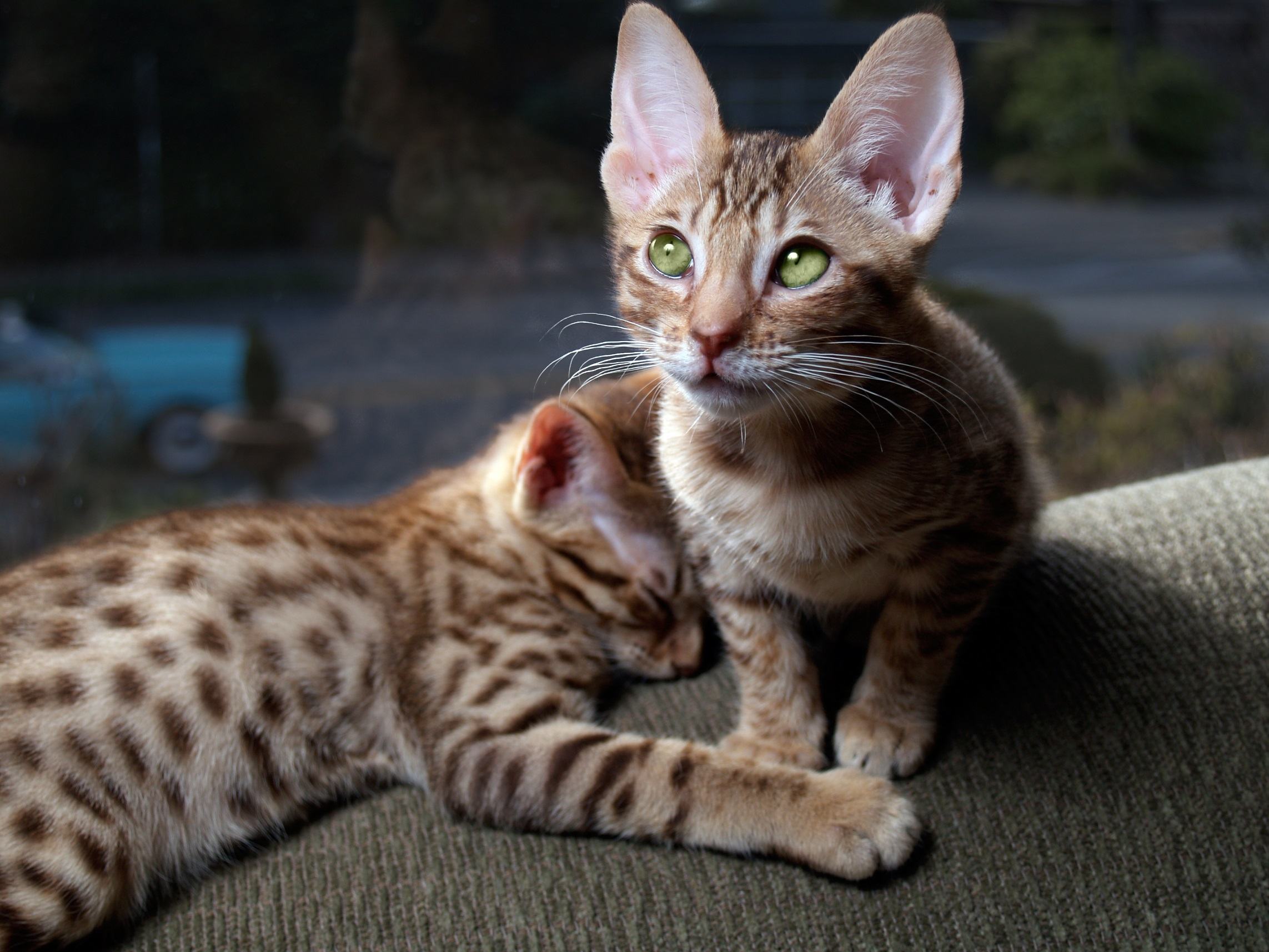 iHeartCats reports that the Ocicat, a product of cross-breeding an Abyssinian and a Siamese, should also go on the list of hypoallergenic cats. CatTime reports that this hypoallergenic cat breed loves retrieving toys and learning to walk on a leash. These spotted cats will follow their owners around the house, and usually welcome guests into their home. Perhaps unsurprisingly, however, these cats don’t love being left alone.

Next: This cat comes in 300 different colors and patterns. 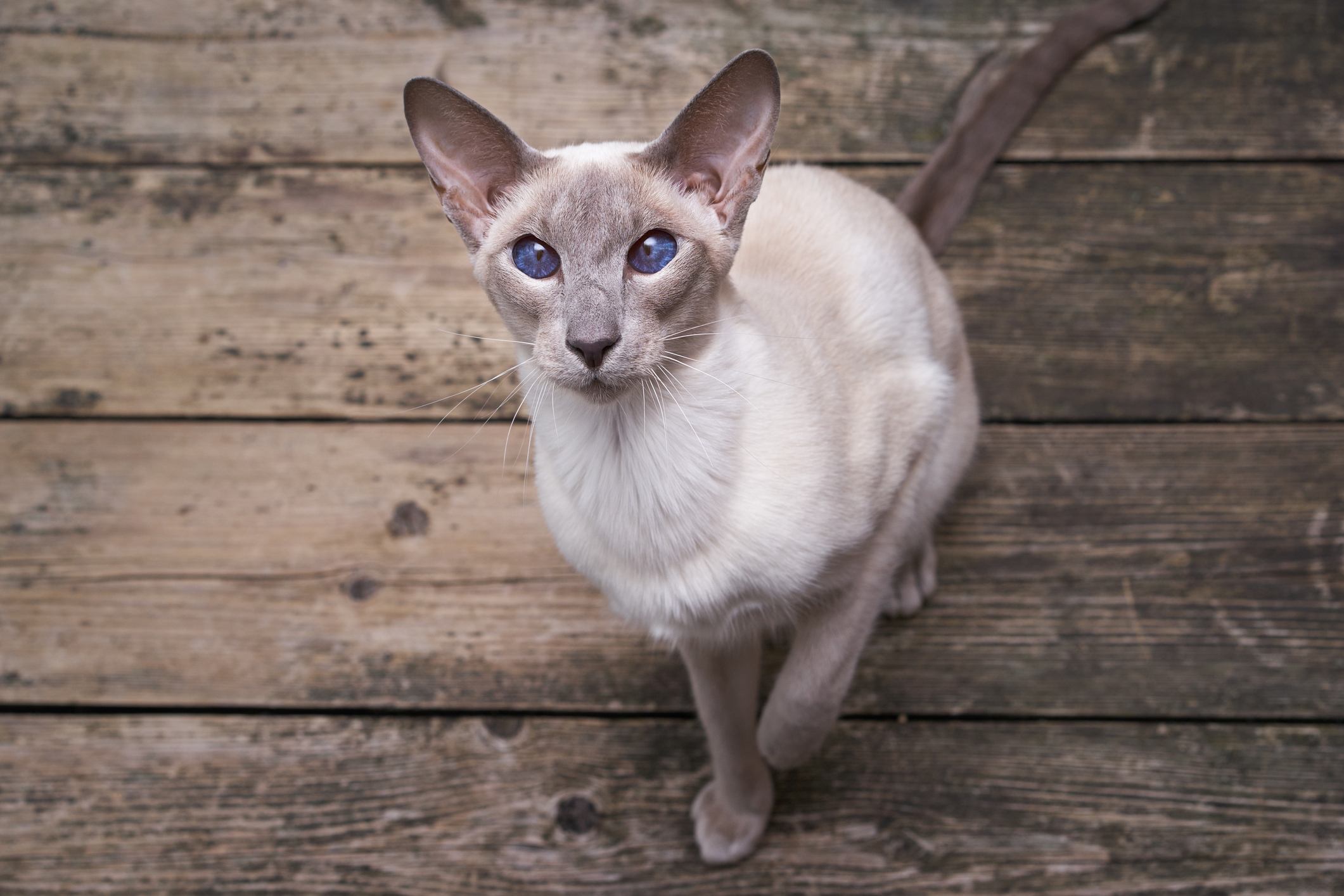 These cats come in so many colors. | Leschenko/iStock/Getty Images

Despite its confusing name, the Oriental shorthair actually originated in England, not in Asia, according to iHeartCats. Regardless of its origin, this cat breed should go on your shortlist if you want a cat who won’t aggravate your allergies. Mom.me notes that this breed comes in 300 different colors and patterns — more than any other cat breed — but all have a very fine, short coat that sheds only infrequently. An Oriental shorthair will still benefit from regular grooming to keep dander to a minimum. But most people with cat allergies either don’t react this breed, or have only a mild reaction.

Next: This hypoallergenic cat has a playful personality. 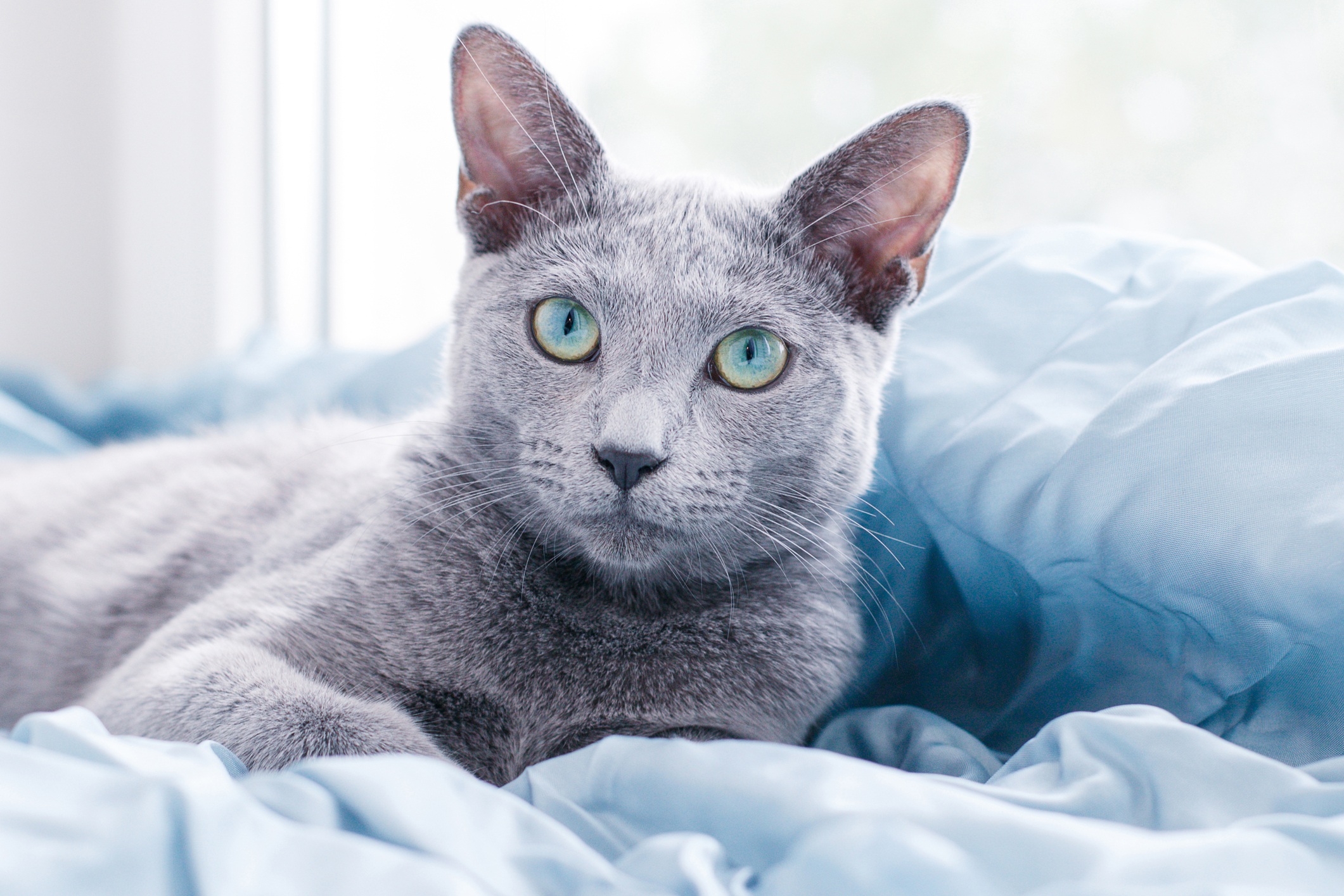 They produce less of the protein that causes allergies. | Liudmila Anufrieva/iStock/Getty Images

iHeartCats also adds the Russian blue to the list of hypoallergenic cat breeds. This cat breed produces less of the glycoprotein Fel d 1, the compound to which many allergy sufferers react. So for many people with allergies, a cat like a Russian blue may be a safer bet than a cat that’s hypoallergenic merely because it doesn’t shed as much or as often as other cats. According to PetMD, Russian blues have playful personalities, and can spend hours amusing themselves. However, if you cut a game of fetch short, these cats are known for adopting a hurt expression (perhaps to guilt you into playing longer)! 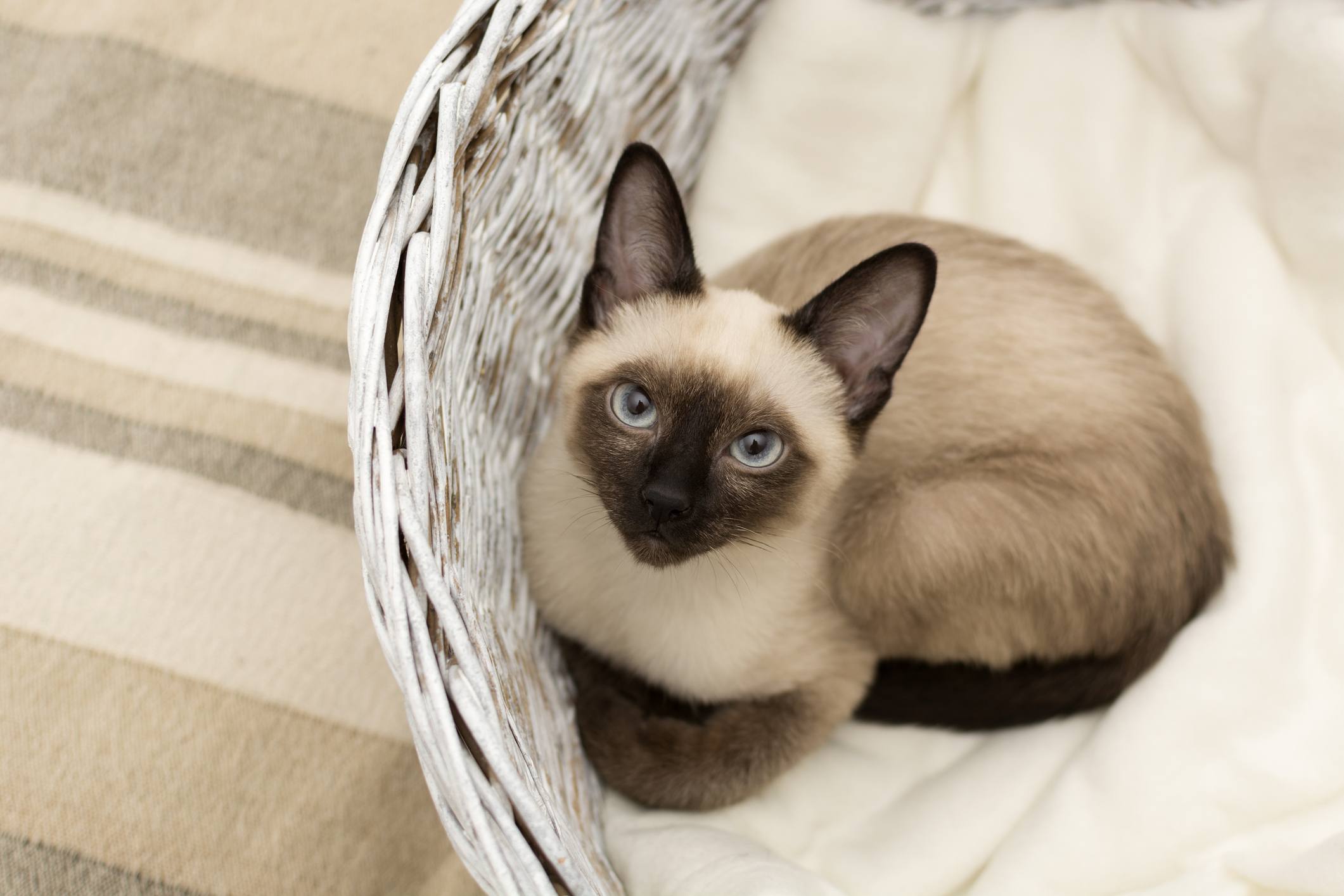 Many hypoallergenic breeds are descendants of the Siamese. | Lucija_Jovanovic/iStock/Getty Images

Many of the hypoallergenic cat breeds you’ll choose among if you have allergies are descended from the Siamese. So it’s no surprise that the Siamese itself also counts as a hypoallergenic cat. PetMD places this breed on its list of hypoallergenic cats. The publication also notes that above all else, the Siamese is a social cat who wants human companionship. These cats communicate vocally with the people around them. But they get lonely and sad fairly easily, so they won’t make a good match for people who aren’t at home often.

Next: This hypoallergenic cat breed may not cause a reaction at all. 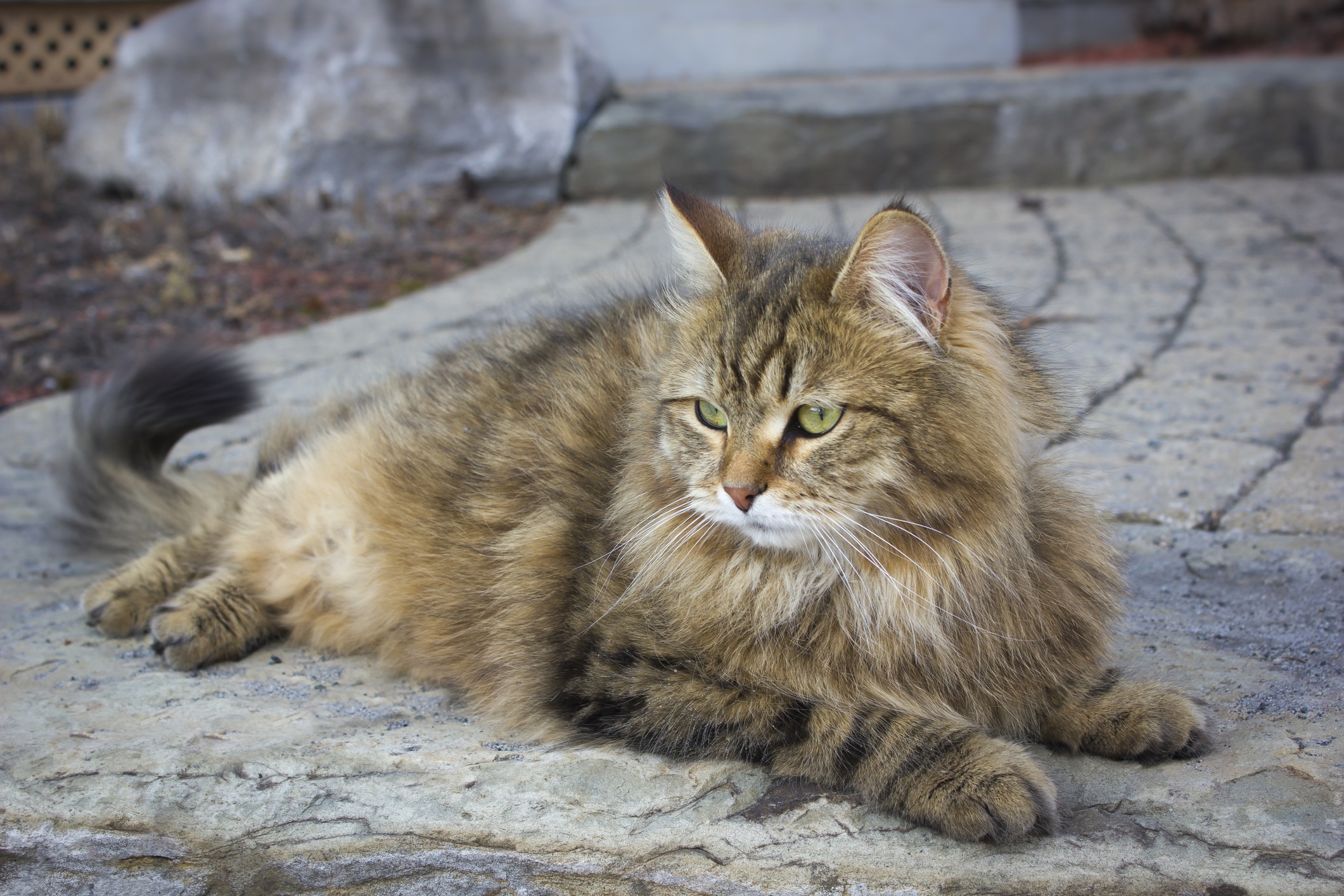 Despite their long hair, they’re great for people with allergies. | MaloriMay/iStock/Getty Images

You might be surprised to see a cat with a long, shaggy coat on the list of hypoallergenic cat breeds. But according to iHeartCats, the Siberian makes a great pet for somebody considering hypoallergenic cats. This breed has smaller amounts of the Fel d 1 protein, a common allergen, in its saliva and dander than other cats. That means that people with allergies are less likely to react to a Siberian than to other breeds. Mom.me reports that even people with severe allergies to cats have reported no symptoms at all, “even when surrounded by many Siberians.” Sign us up!

Next: This cat breed is hypoallergenic for a very unique reason. 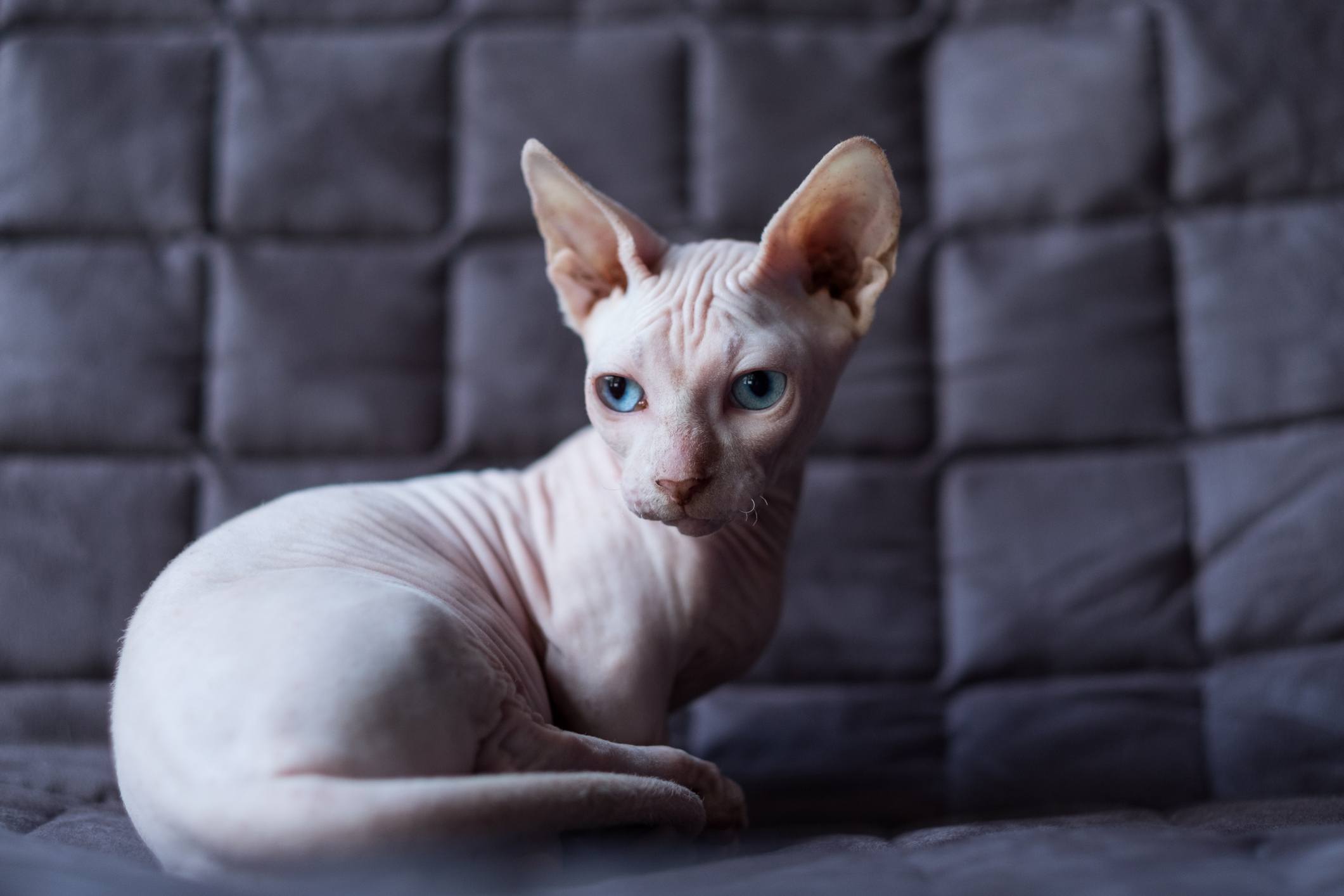 They don’t have fur to trap the saliva. | Peterpancake/iStock/Getty Images

Most allergy sufferers react to compounds in cat dander, to which they typically become exposed when the cat sheds hair. But if you don’t want a cat who will shed hair at all, you have one striking option: the Sphynx cat. As iHeartCats notes, a Sphynx cat isn’t without allergens altogether, since these cats do still produce dander. (And, of course, saliva!) But they don’t have fur to trap their saliva during grooming sessions, and Sphynx cats and allergy sufferers can get along well.

Next: Here’s what you should know about choosing a hypoallergenic cat.

A word on hypoallergenic cats 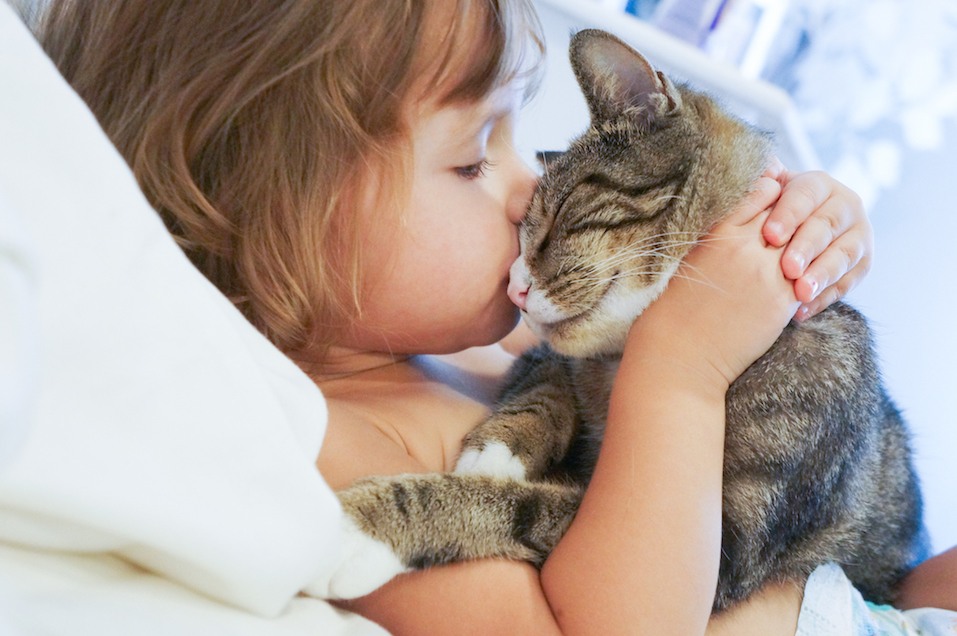 There isn’t a breed that is 100% hypoallergenic. | ehaurylik/Getty Images

As PetMD reports, there really aren’t any “100 percent hypoallergenic domestic cats or cats that are completely non-allergenic.” Because all cats produce some amount of dander, you won’t find a cat that’s guaranteed allergy-free. But because the cat breeds above produce or spread less dander, or have less of the Fel d 1 in their saliva, they often make good cats for people with allergies.

Read more: You Should Never Believe These Myths About Your Cat