Inside the USS Zumwalt, a Stealth Destroyer That May Be the Most Advanced Warship Ever Built

When many civilians get a look at military vessels, they look like something out of Star Wars. The Navy’s USS Zumwalt is no exception. The Navy’s newest addition ranks as both the most technologically advanced and largest surface combat vessel in the world. Let’s take a look at this impressive new ship.

Its namesake made great strides in the Navy 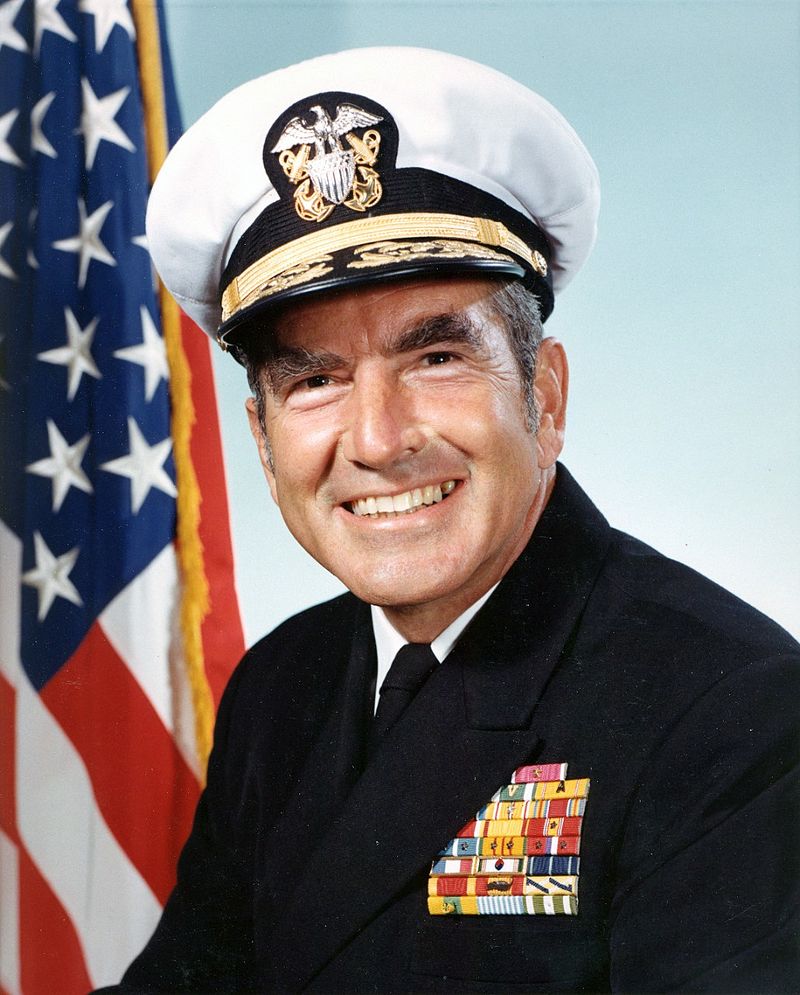 The USS Zumwalt embodies “the legacy of warfighting excellence and innovation of Adm. Elmo R. Zumwalt, Jr., a veteran of World War II and the conflicts in Korea and Vietnam,” according to the Navy. The soldier spent 32 years in service and dedicated himself to modernizing and focusing on leading from within. As the 19th Chief of Naval Operations, Zumwalt innovated strategically and technologically, even in the face of budget cuts and a stressed workforce.

Zumwalt’s innovation resulted in a number of successful new programs, including the Oliver Hazard Perry-class frigate, the Ohio-class ballistic missile submarine and the F-14 Tomcat, all of which represented significant strides in the Navy’s capabilities. As a social reformer, he also worked toward gender equality and improved quality of life for his sailors.

Next: Its construction cost the government pretty penny.

Advances of this kind do not come cheap

Originally, the Zumwalt’s features fell under the 21st Century Destroyer program, which Congress cut in half in 2001. Subsequently, the National Defense Authorization Act of 2007 provided funding for the ship. By 2008, the Navy had allocated $1.4 billion for the ship to Bath Iron Works. That firm took responsibility for the design, construction, integration, testing, and delivery of the vessel’s steel deckhouse, hangar, and aft Peripheral Vertical Launch System. Huntington Ingalls Industries fabricated the composite deckhouse, helo hangar, and aft PVLS. Raytheon took the lead on software development and integration with BAE providing the AGS and LRLAP.

“When you look at DDG 1000, the technology is extraordinary,” said Chief of Naval Operations Adm. Gary Roughead. “It is unique in that we have never tried to bring online so many new technologies, but the steps that have been taken and the investments that have been made have reduced the risk that is normally associated with new technology. The Zumwalt-class of ships is really quite impressive.”

Next: The ship’s technological innovation tips a hat to its namesake.

The Zumwalt employs many technological advances

“The only thing more impressive than the capabilities of the ship are the capabilities of its fine crew,” said Capt. James Kirk, as the ship arrived in port in December 2016. The innovative ship features new technologies that the Navy said will serve as a template of sorts for incorporation into future vessels. For example, the Zumwalt, or DDG 1000, comes as the first surface combatant to employ an Integrated Power System, which will provide power to propulsion, ship’s service, and combat system loads from the same generators. That will lead to energy savings, making it not only powerful, but more “green” than older models, too.

Next: Even at its large size, the ship remains stealthy.

The ship’s unique “tumblehome” hull also makes it harder for adversaries to find. The tumblehome hull form describes a design which the hull slopes inward from above the waterline. Because a slope returns a less clear radar image than a hard-angled hull, the tumblehome slope reduces the radar cross section. Its composite superstructure reduces acoustic output, making the ship harder to detect using radar at sea. It also features a multi-function radar system, so the ship can detect other vessels more easily, as well. The uniquely advanced radar can conduct surveillance over both land and sea.

Next: The ship also ranks first in its type of propulsion.

There was a huge amount of work that went into the design and construction. | U.S. Navy

Next: The ship also carries some serious firepower.

It’s the new frontier in missiles

The missiles can reach three times the distance they used to. | U.S. Navy photo illustration

The ship comes extremely well-armed, as well. It features a battery of two Advanced Gun Systems, which can fire Long-Range Land Attack Projectiles. Those will reach up to 63 nautical miles, according to Navy tests. That represents a three-fold range improvement in naval surface fires coverage. While its firepower looks impressive, the Navy has plans to beef it up even more. Unlike previous classes of destroyers, which primarily intended to counter deep-water threats, the Zumwalt’s primary mission provides land attack support for ground forces. That’s in addition to traditional destroyer missions of anti-air, anti-surface, and undersea warfare.

Next: The Navy could add these high-powered capabilities to the USS Zumwalt.

The current political climate could affect the Zumwalt

They may be home to nuclear missiles. | U.S. Navy/Courtesy of General Dynamics

The Nuclear Posture Review features a long-term plan that could install nuclear cruise missiles aboard the Zumwalt, according to the commander of U.S. Strategic Command. Those would include the new, low-yield nuclear Sea-Launched Cruise Missile, which previously only launched from ballistic submarines. While the Navy has not yet decided where it will mount the missiles, the Zumwalt stands as one option.

Next: This comes in response to nuclear capability development by Russia and China.

The U.S. must keep up with the nuclear Joneses

It has to keep up with everyone else. | U.S. Navy/Courtesy of General Dynamics Bath Iron Works

That NPR called for the development of two new, low-yield nuclear weapons, the SCLM and a new submarine-launched ballistic missile. Hyten said the U.S. plans on modifying “a small number of existing submarine-launched ballistic missile warheads to provide a prompt, low-yield capability, as well as pursuing a modern nuclear-armed sea-launched cruise missile in the longer term.” That means the Zumwalt could soon carry them, thanks to nuclear aspirations by other countries.

“The goal of our recommendations is to deter war, not to fight one,” said Pentagon policy chief David Trachtenberg. “The goal of the 2018 NPR is to make sure that deterrence will not fail. … It is clear that our attempts to lead by example in reducing the numbers and salience of nuclear weapons in the world have not been reciprocated,” Trachtenberg continued. He added that Russia and China are currently expanding their own nuclear arsenals.

Next: The amazing power of America’s new and largest aircraft carrier. 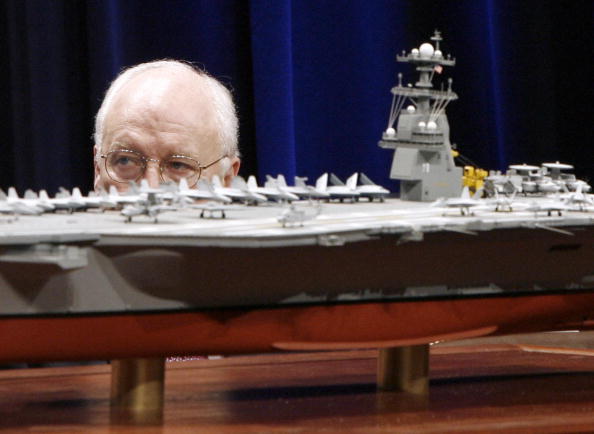 U.S. Vice President Dick Cheney looks at a scale model of the new U.S. Navy aircraft carrier, the USS Gerald R. Ford, during a naming ceremony at the Pentagon in 2007. | Jason Reed/AFP/Getty Images

The vessel was named under George W. Bush’s administration in 2007. And it was built by Huntington Ingalls Industry-Newport News Shipbuilding. The ship cost about $13 billion to bring to life.

Next: This ship moves some serious water.

That’s quite a bit of displacement for an aircraft carrier

The Ford is a massive ship. It can displace more than 100,000 long tons full load. That’s the equivalent of moving 224 million pounds of water out of the way.

Next: That’s a huge flight deck.

It’s the largest flight deck in the world

The flight deck of this beauty is 256 feet wide and 1,092 feet long. You may also notice that the island, or the flight deck’s observation tower, is located more toward the rear of the vessel, rather than the center.

Next: Size does matter.

The island is much smaller

Marine One sits on the flight deck during the commissioning ceremony for the USS Gerald R. Ford in Norfolk, Virginia, on July 22, 2017. | Jim Watson/AFP/Getty Images

Thanks to a huge amount of advancements in technology, the island on this craft is much smaller. That allows for more room on the flight deck to store planes after or before they launch.

Next: Get out of the way of this anchor.

The anchor on this behemoth is actually smaller than its predecessors. It weighs in at 30,000 pounds, which is actually half of the former Nimitz-class carrier’s anchors. The chain on this bad boy is an impressive 1,440 feet long.

Next: That’s a whole lot of power.

The Ford is powered by two — not one, two — nuclear reactors attached to four shafts. This vessel can reach speeds of up to 30 miles per hour. In maritime terms, that is extremely fast for this size of a vessel. With that kind of power, it won’t have to refuel for a long time.

The RAM is one of the Navy’s most powerful defensive tools. It uses radio and infrared frequencies to track and destroy anti-ship missiles. Accompanying this powerful automated defense shield is the Evolved Sea Sparrow Missiles for added range and precision.

Next: If something were to get past that, this defense system farts bullets. 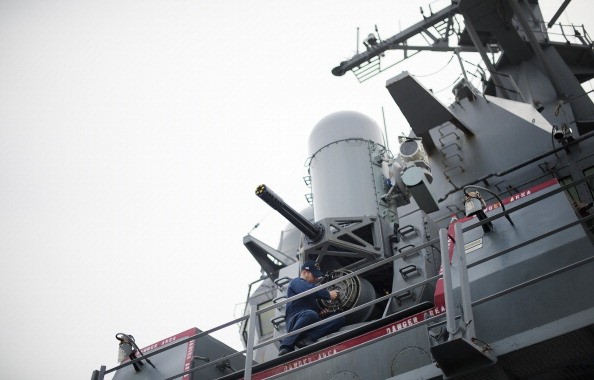 From the sound that this thing makes, the Phalanx close-in weapons system basically farts bullets. It’s the last line of defense and throws up a wall of bullets at any incoming ordinance. The Phalanx can fire 4,500 bullets in a minute.

Next: Enough about defense, let’s talk about offense.

The Ford can hold a little over 75 aircraft

A shot of the hangar on the USS George H. W. Bush (CVN 77) is pretty similar to the Ford. | Andrew Caballero-Reynolds/AFP/Getty Images

First and foremost, the Ford is a support ship. The U.S. deploys aircraft carriers to conflict zones around the world to provide support. This ship is equipped to house over 75 aircraft and all the ammunition they need.