As Hurricane Irma makes landfall over the Florida Keys, winds were reported at 130 mph as the storm was moving north-northwest, according to reports. Irma made landfall at Cudjoe Key, east of Key West, at 9:10 a.m. EST, and a gust of 106 mph was reported in nearby Big Pine Key.

BREAKING: Hurricane #Irma has made its first landfall at 9:10 a.m. near Cudjoe Key, Florida: https://t.co/TpeaQOAT5Z pic.twitter.com/z4Y0f2yYNb

In recent days, thousands of people have evacuated the Florida Keys. A mandatory evacuation for tourists went into effect Wednesday, and residents were ordered off the island later that day. Highway 1 is the solitaire road that leads from the keys to the mainland. Many boarded up homes and businesses, filled up gas tanks, and left the Keys.

Elizabeth Prieto, who lives in the Keys, is evacuating for the first time in 51 years. “I’ve been through George, been through Andrew, been through Wilma, but I’m not staying for Irma. No, not happening,” she told CBS News. 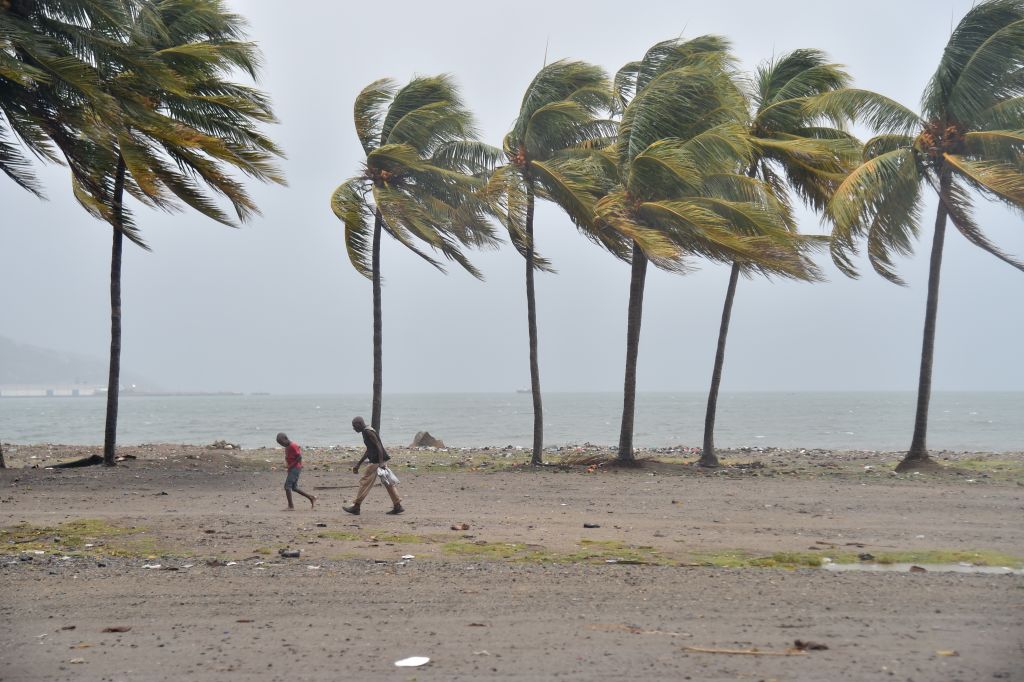 Haitian people walk through the wind and rain on a beach, in Cap-Haitien on September 7, 2017, as Hurricane Irma approaches. | Hector Retamal/AFP/Getty Images

Key Largo resident Melissa Norman packed up belongings to head to a relative’s home in Fort Myers while her husband Jerry, 55, told Miami Herald he plans to ride out the storm in a concrete building where he runs a towing business. “Everyone’s freaking out,” Jerry Norman said. “This one is different. It’s scary.” Norman plans to assist the city with damage from the hurricane, the Herald reported.

Key West Mayor Craig Cates told PBS on Saturday that he has decided to remain on the island during the storm. “We had to be here after the storm, and we want to make sure we were here … at least right up to the storm where we could tell all the residents to keep them going into shelters,” Cates said regarding his decision to remain on the island.

Cates estimated that less than 20% of the 25,000 Key West residents remain on the island during the storm, many of whom are in the three shelters that are open now. “A lot of people did have transportation,” Cates said. “We ran, you know, 16 buses to Miami for two days to get residents out, but not everybody could get on there.”

One Key West resident who chose to stay put in his home was John Hines. “It’s going from crappy to worse,” Hines told CNN Sunday. “All the interior doors are starting to rattle now, sounds like someone is knocking on the front door,” he said. “The winds are picking up. It’s only going to get worse as it gets closer.”

People who did not evacuate are in danger, Federal Emergency Management Agency Administrator Brock Long told CNN on Saturday. “You’re on your own until we can actually get in there and it’s safe,” he said. “The message has been clear. The Keys are going to be impacted. There is no safe area within the Keys. And you put your life in your own hands by not evacuating.”

Ten employees of the historic Hemingway Home in Key West, built in 1851, are remaining on the estate for the duration of the storm, in part to take care of the 55 cats who live on the property.

Miami Herald shared stories on Twitter of Keys residents, such as Michael Hames, 72, a homeless man who had planned to ride out Irma in his car near Key West. However, a friend invited then him to his home.

Michael Hames, 72, is homeless, was going to ride out Hurricane Irma in his car near Key West. A pal invited him to his home last second #mh pic.twitter.com/KsxAhaR2xe

Another of the news outlet’s tweets features a man riding a bicycle Sunday morning in Key West.

A guy in a bicycle braves Hurricane Irma on Eaton Street in Key West #mh pic.twitter.com/gk4FgqziUu