Nobody gets more excited about a royal wedding than the Brits. And one British baker took the excitement over the wedding of Prince Harry and Meghan Markle to new heights — life-sized heights, as it turns out. An amateur baker created a life-sized replica of the couple in cake form.

Read on to get all the details on how exactly how she created it, how long it took to make (on page 5), and what happens to it next.

1. Lara Mason made the replica out of sponge cake 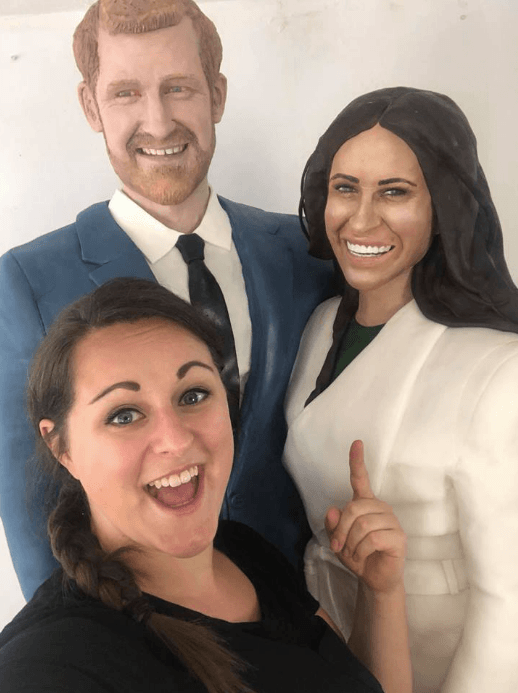 Business Insider reports that amateur baker Lara Mason made the replica of Prince Harry and Meghan Markle out of sponge cake. Then, she decorated it with chocolate, ganache, and buttercream.

The whole endeavor was sponsored by Cake International, a British cake competition that’s celebrating its 25th anniversary this year, the same year as the royal wedding. As Mason told Business Insider, “We wanted to combine the two special occasions and make something epic.”

Next: The cake won’t go away anytime soon.

2. The cake will last for months 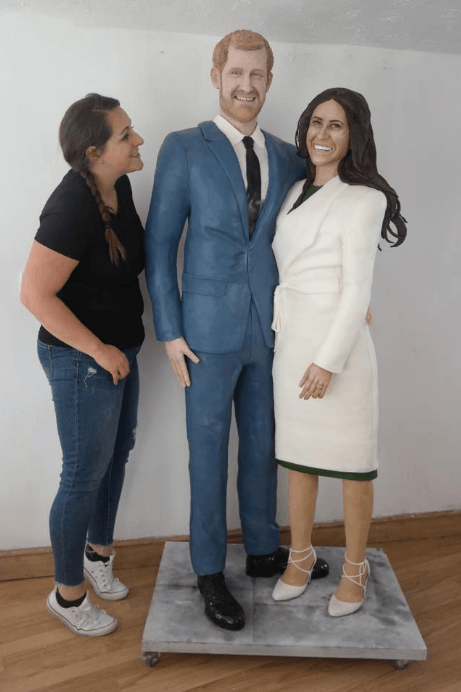 This is clearly no typical cake. | Lara Mason Cake Art via Facebook

When you bake a cake, you typically plan to eat it within a few days. After all, cakes only last so long. But not this cake. As Business Insider reports, the life-sized Meghan Markle and Prince Harry cake needs to last at least until November, when it will go on display at Cake International’s show.

Currently, Mason has it in storage at her studio. She explained, “The cake is wrapped in sugarpaste so is airtight. This will keep it in good condition as long as it doesn’t get too hot!”

Next: Nobody plans to eat it.

3. Nobody will eat the cake 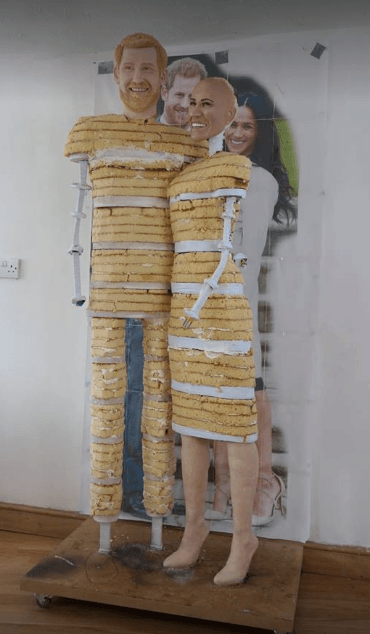 It’s certainly edible, but perhaps too perfect to ever eat. | Lara Mason Cake Art via Facebook

As you might expect, the cake isn’t intended to be eaten. But the BBC reports that if it were to be eaten, there’s enough cake to feed more than 500 people. Of course, that isn’t quite enough to feed the couple’s 1,200 wedding guests. And it’s unlikely that anyone would want to eat it after it goes on display at the cake show.

As Mason explains, “I imagine after three days of people taking selfies, it might be a little worse for wear.”

Next: Mason got her inspiration from this image.

4. It mimics a famous photo of Prince Harry and Meghan Markle 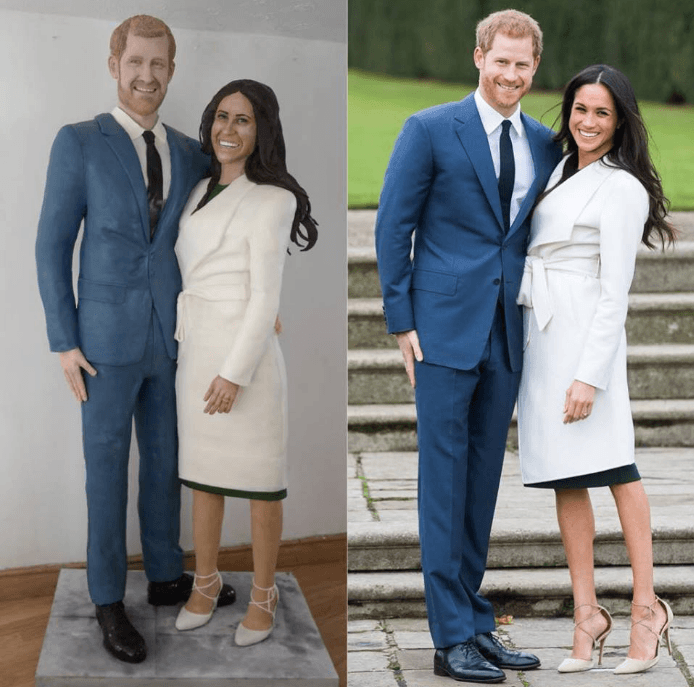 You probably recognize where the inspiration for the cake came from. | Lara Mason Cake Art via Facebook

Business Insider reports that Mason modeled the life-sized cake on one of the most famous photographs of Prince Harry and Meghan Markle. Mason characterized “sculpting the very recognisable faces” as the most challenging part of creating her masterpiece. She made the couple’s faces out of chocolate. And she created the eyes from poured sugar.

As the BBC notes, even the royal icing on the cake mimics the outfits that Prince Harry and Meghan Markle wore the day they announced their engagement.

Next: This is the amount of time it took to make the cake. 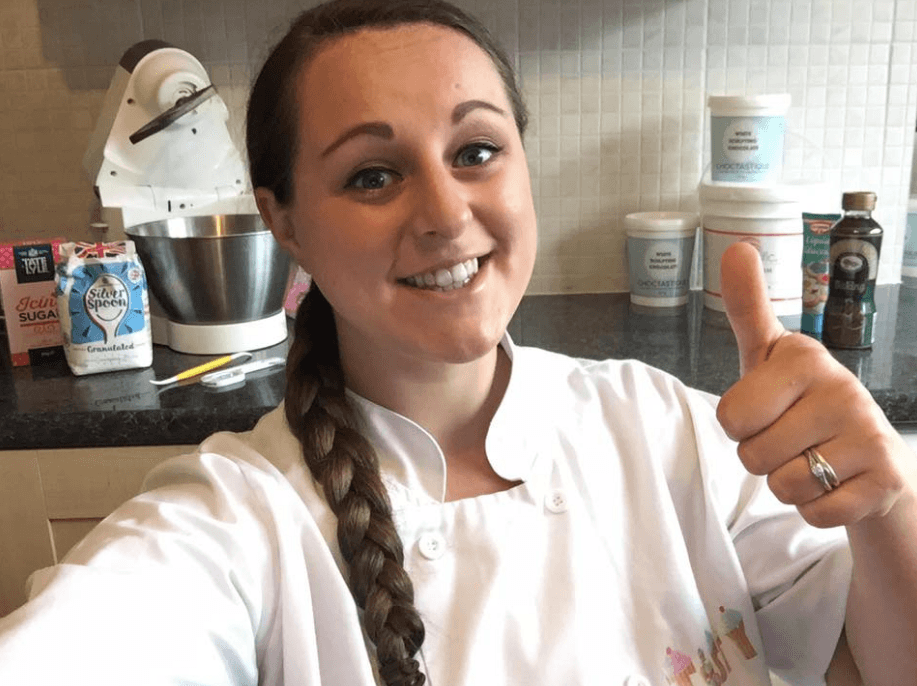 This may have been one of the most ambitious cakes Lara Mason ever made. | Lara Mason Cake Art via Facebook

Most people run out of patience if it takes more than an hour or two to prepare a dessert for a party. But as The BBC learned, it took Mason 250 hours over six weeks to create the life-sized replica of the royal couple.

Next: This mishap occurred along the way.

6. Prince Harry’s face began to melt in the heat 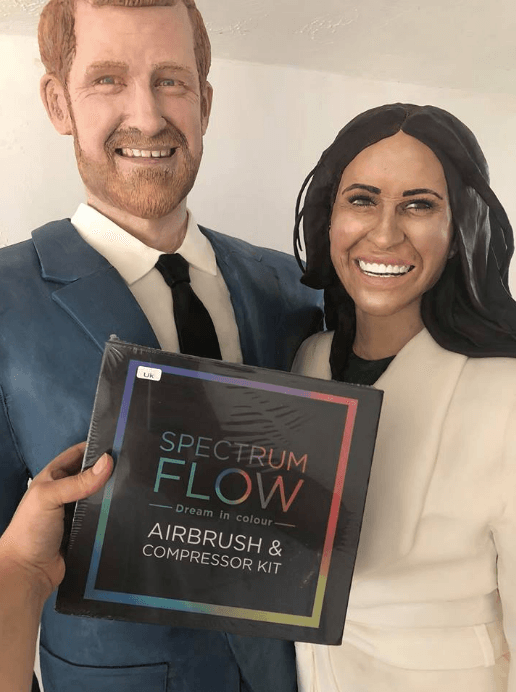 Prince Harry needed a face-lift once or twice during the building process. | Lara Mason Cake Art via Facebook

Mason didn’t plan a test run. (At least in part, we assume, because of the vast quantities of ingredients needed to prepare the cake.) But she tells Business Insider that she did get a do-over with Prince Harry’s face. A heatwave caused the prince’s face to melt, which forced her to remake it.

Yet as she told the publication, “I actually think it turned out better the second time around so I guess we can call the first head my practice go.”

Next: This is what it cost to make the cake. 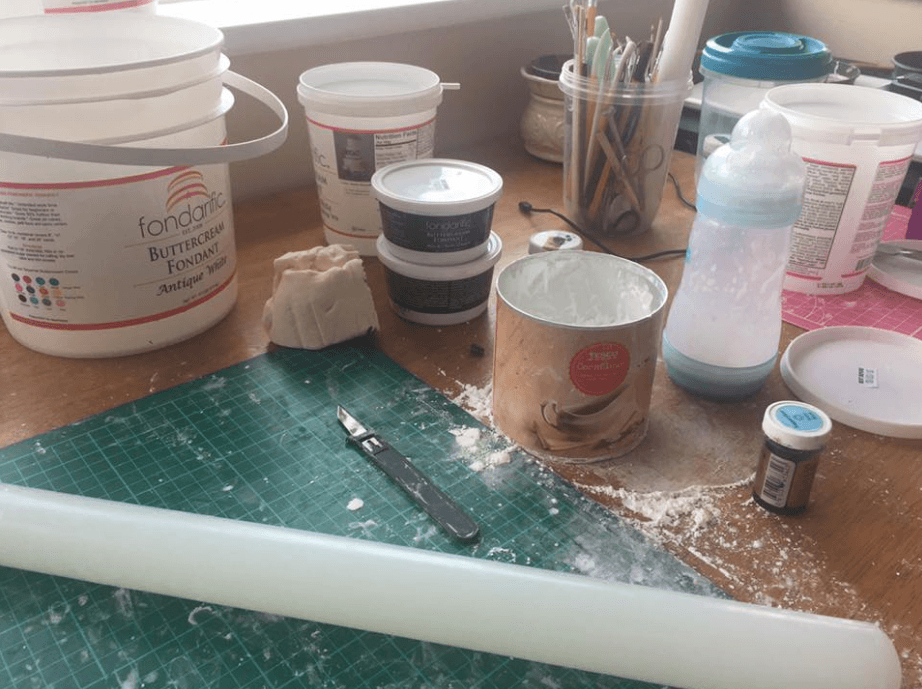 As anyone who’s bought a box of butter or a carton of eggs recently could tell you, a life-sized replica of Prince Harry and Meghan Markle doesn’t come cheap. Mason told Business Insider that Cake International sponsored the creation of the cake.

But if she had had to buy all the tools and materials she used, Mason estimates that it would have cost about $4,000 to make the cake. Cake International actually made the sponge cake for her. Then, she assembled the structure and decorated the cake.

Next: Here’s the cake that Harry and Meghan actually chose for their wedding.

8. Prince Harry and Meghan Markle made an untraditional choice for their actual wedding cake The couple is going for an untraditional spin on a fruitcake. | Violet by Claire Ptak via Instagram

Mason’s unconventional cake wasn’t destined for the royal wedding. But Prince Harry and Meghan Markle did make a pretty untraditional choice for their actual wedding cake. As The New Yorker reports, the couple broke with centuries of royal tradition by skipping the fruitcake and ordering a cake featuring Amalfi lemon and English elderflower. (Their baker of choice? Claire Ptak of Violet Bakery.)

As The New Yorker notes, Brits have “have developed a taste for cakes beyond ‘stale sponges.'” So it’s little surprise that the sponge cake will remain at the cake show, not at the royal wedding.

Read more: This Corgi Royal Wedding Combines 2 of the Best Things Ever