In the early morning commute, London train riders, and the world were shocked by a terrorist attack. At approximately 8:20 (GMT) this morning, an improvised explosive device detonated on a London commuter train. Approximately 22 people were injured in the blast, but no one was killed. Eyewitnesses describe the event as a wall of flames or a ball of fire. There is currently a suspect at large and a manhunt is underway for the so-called “Bucket Bomber,” named for the method in which he built the IED.

Leaders, as usual, are in the spotlight and are being relied on for guidance during this tough time. London mayor Sadiq Khan was viciously and unjustly attacked by president Trump over his misunderstood response to the last terror attack in London. Let’s see how the world is reacting to this latest London Terror attack.

Donald Trump, as usual, went straight to Twitter to express his rambling thoughts on the matter, and even gave us a play-by-play of what he was thinking, and planning on doing. You know, like a true leader does (rolls eyes). He was tamer however in his Tweets about the Parsons Green attack, and didn’t attack anyone directly; just a bold show of wanting to be tougher on terror. 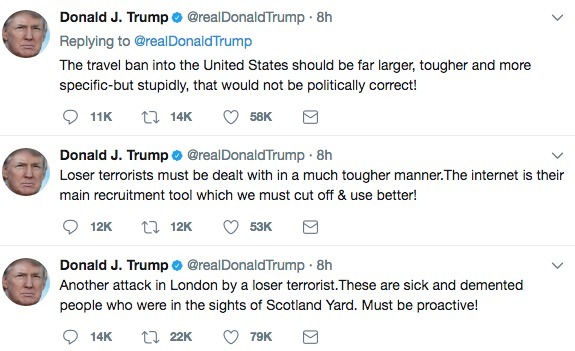 This is a 180 from his last reaction, but it still drew the attention of Prime minister Theresa May. Let’s just say that she casually snipped at the President Trump.

Next: Prime Minister Theresa May, throws shade at the President

Theresa May, Prime Minister of England

If England has anything, it’s dry wit, and they are known for it even in the wake of a terror attack. Sometimes, it may slip right over your head unless you read between the lines. Naturally, May gave the typical and expected response, saying that her thoughts and prayers are with the victims and their families, but she did address Donald Trump as well.

“I never think it’s helpful for anyone to speculate on what is an ongoing investigation,” she said. This seems to be her basically saying that she doesn’t need to hear what Donald has to say, and speaks volumes of how world leaders view our President.

Next: The Chancellor of Germany weighs in

Angela Merkel expressed caution and cooperation, saying “we do not yet have all the explanations, but our thoughts are with the wounded and the British people. This only reinforces the need for our common work to combat Islamist terrorism” (via a report from Agence France-Presse).

Next: Sadiq Khan reacts to the attacks

Sadiq Khan has encouraged his citizens to “remain calm and collected” during this trying time for the City of London. He then calmly explained the situation, and warned that there would be an “enhanced police presence” around the city of London.

Kahn went on to say that “as London has proven, again and again, we will never be intimidated or defeated by terrorism,” and that “the terrorist attack this morning was an attempt by evil and cowardly individuals to kill, to injure and disrupt our way of life.”

Jeremy Corbyn, you may remember from the Brexit debacle a while back, has expressed his thoughts and prayers with the people of London. In particular, the first responders doing such an amazing job at the scene. “Thoughts with those injured in Parsons Green terrorist incident, and thanks to police, ambulance staff, and firefighters who are responding,” he stated.

Next: Boris Johnson attempts to sound like a human

Boris Johnson, Secretary of State for Foreign and Commonwealth Affairs

Boris Johnson, who no one can forget because of his….. unique style, took the lead early when the first news of the attack started to trickle out.”Everybody should keep calm and go about their lives in a normal way, as normal as they possibly can,” Johnson said in the early morning.

Next: Ireland weighs in on the situation and defends its citizens

Simon Coveney was quick to express his thoughts and prayers with the victims in the London train blast and also to dismiss any chance of any Irish citizens to be involved in the attack. He said in a statement, “I am shocked by the incident in London this morning, which the Metropolitan Police are treating as a suspected terrorist attack. My Department is monitoring the situation closely through the Irish Embassy in London and the Consular Division in Dublin. As of now, we have no indications to suggest that any Irish citizens have been affected.”