When it comes to snacks that go great with drinks, it’s pretty hard to beat Mexican food. Chips and salsa, tacos, queso fundido, and guacamole represent just a small sampling. Picking a favorite is hard, but elote, better known as Mexican street corn, might just top our list. Though the classic recipe of corn with cheese and a creamy sauce will never disappoint, a little bit of creativity transforms the dish into something totally new that’s just as delicious. Fry up a batch of these sweet and salty fritters for a crispy snack no one will be able to resist. 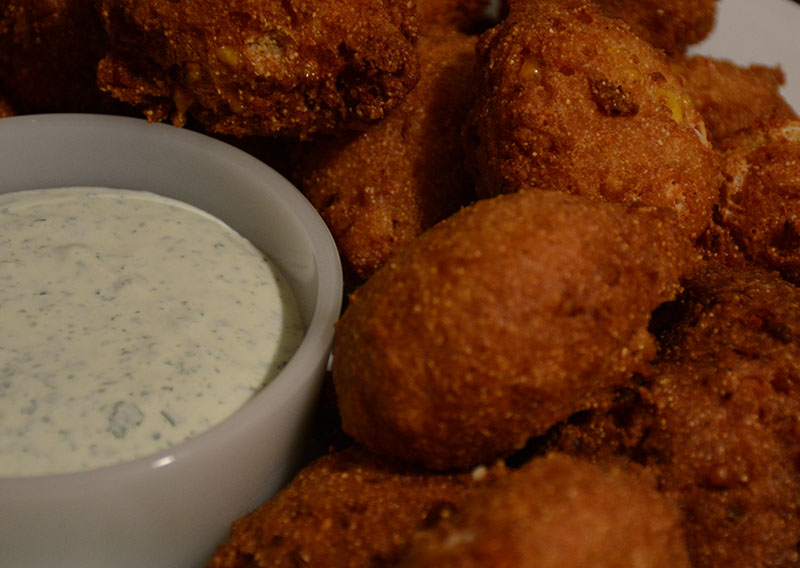 The downside to Mexican street corn is the short season. The dish doesn’t really work unless you have fantastic produce, which limits you to just a few months every year. You might be able to find imported corn on the cob in the dead of January, but it’s not going to have the same sweet pop as the stuff you’ll score in August and September. Transforming the dish into fritters makes it perfect for year-round cooking, because you can use frozen, thawed kernels just as easily as ones fresh from the cob.

If you’re feeling a bit skeptical, consider what you’re really getting. Fritters by another name are doughnuts. These are essentially cheesy doughnuts, flecked with corn and chipotle. They’re sweet, salty, spicy, and have a fantastically crisp exterior. They’re pretty great the way they are, but dunking the snacks in a cilantro and lime sauce adds another layer of flavor and texture.

Doughnuts generally fall into one of two categories: yeast-raised or cake. The former rely on, you guessed it, yeast to get their texture while the latter use ingredients like baking powder or baking soda for lift. Going for a cake-style batter was the clear choice, because it’s ready to go right after mixing, while a yeast dough can take hours to rise. To speed things along even more, we opted for a boxed cornbread mix. It also cuts down on the amount of ingredients and eliminates a lot of the fussy measuring.

The best way to tackle this recipe is to start heating your oil first. If you have a fryer, go ahead and use it. Otherwise, a sturdy pot with a fry or candy thermometer works just as well. While the temperature climbs, blend together the sour cream sauce, and let it hang out in the fridge. Stir a little bit of chipotle powder into the cornbread mix, then add the egg and milk. Finally, fold in the corn and crumbled cheese. By the time you’re ready to fry, your oil should be good to go. Drop spoonfuls of batter into the oil, then fry for 2 to 3 minutes for fritters that are perfectly cooked in the center and crispy on the outside.

Any of your favorite Mexican beers will make a great pairing for these snacks. If you’re struggling to make a choice, Serious Eats recommended Negro Modelo as a great, all-purpose brew for just about any Mexican food. A classic margarita is also a delightful choice to sip with this salty snack. 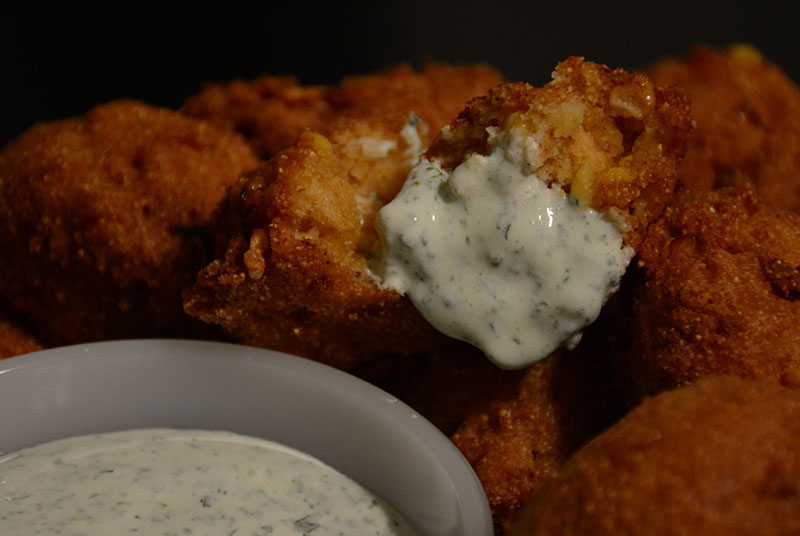 A tablespoon of batter might seem stingy, but these fritters will puff up as they cook. Wait a few minutes before serving the snacks, because they’ll be extremely hot when they come out of the oil. You’ll end up with about 20 fritters, which is enough for four to six people.

Directions: In a fryer or a large, heavy pot, preheat oil to 360 degrees Fahrenheit. Meanwhile, combine sour cream, lime juice, and cilantro in a food processor. Blend to combine. Season with salt, to taste. Keep refrigerated until ready to use.

In a medium bowl, combine chipotle powder and muffin mix. Add milk and egg, and stir just until combined. Gently fold in corn and cheese. Working in batches of about seven at a time, carefully drop rounded tablespoon portions of dough into preheated oil. Fry, flipping to ensure both sides cook evenly, until deeply golden, 2 to 3 minutes. Remove from hot oil to a paper towel-lined sheet tray. Repeat with remaining batter.