These Are the Most Disgusting Things That Happen on Cooking Shows

We can’t relate to everything on our favorite cooking shows. For instance, we probably can’t imagine cooking with pig’s blood or durian, two of the weirdest ingredients that have shown up in the Chopped mystery basket. But what we can sympathize with is the way even the most skilled chefs make mistakes. Most home cooks have used the wrong ingredients or caught something on fire. We’ve also all cut a finger or burned an arm. And the professional chefs on your favorite cooking shows have done the same — and worse.

Read on to check out 15 of the most disgusting things that happen on cooking shows, from mildly cringe-worthy to downright nauseating. 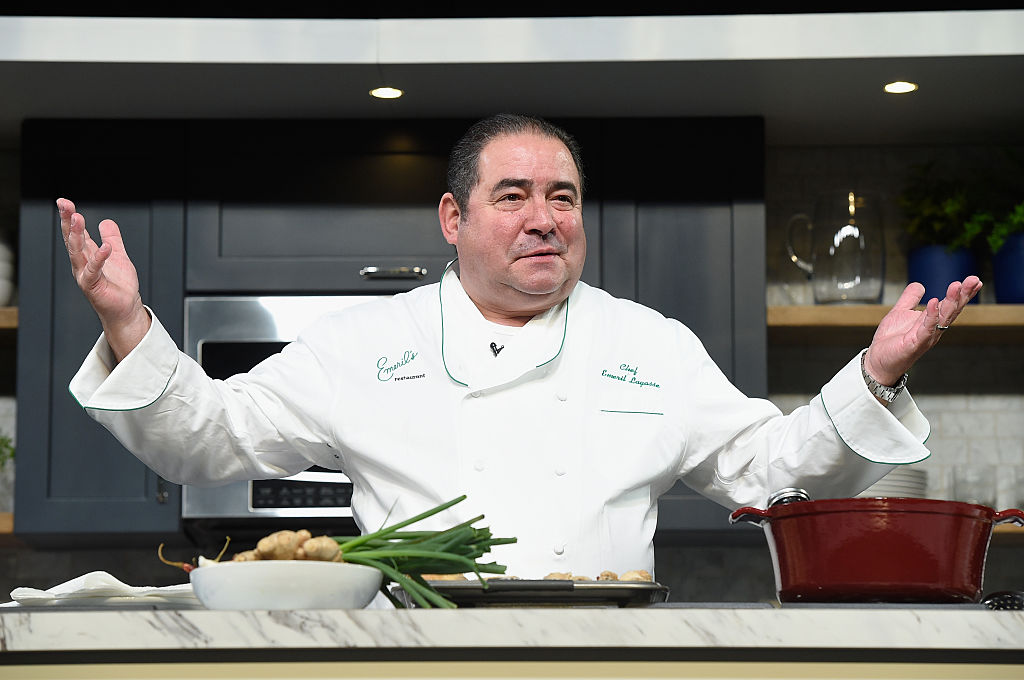 Emeril Lagasse — who has appeared on Top Chef plus his own (numerous) TV shows — tells Delish one of his grossest kitchen mistakes was letting a pineapple upside-down cake explode in the oven. He was baking at a high altitude — and forgot all about it. That’s a major (and messy) mistake because as elevation rises, air pressure falls. Low air pressure means baked goods rise easily. As the batter rises, the cell walls can stretch beyond their maximum and burst. As Lagasse tells it, “The cake actually blew up inside the oven — just the pineapple was lying in the pan.” We don’t envy whoever had to clean up the mess.

14. Broiling instead of baking 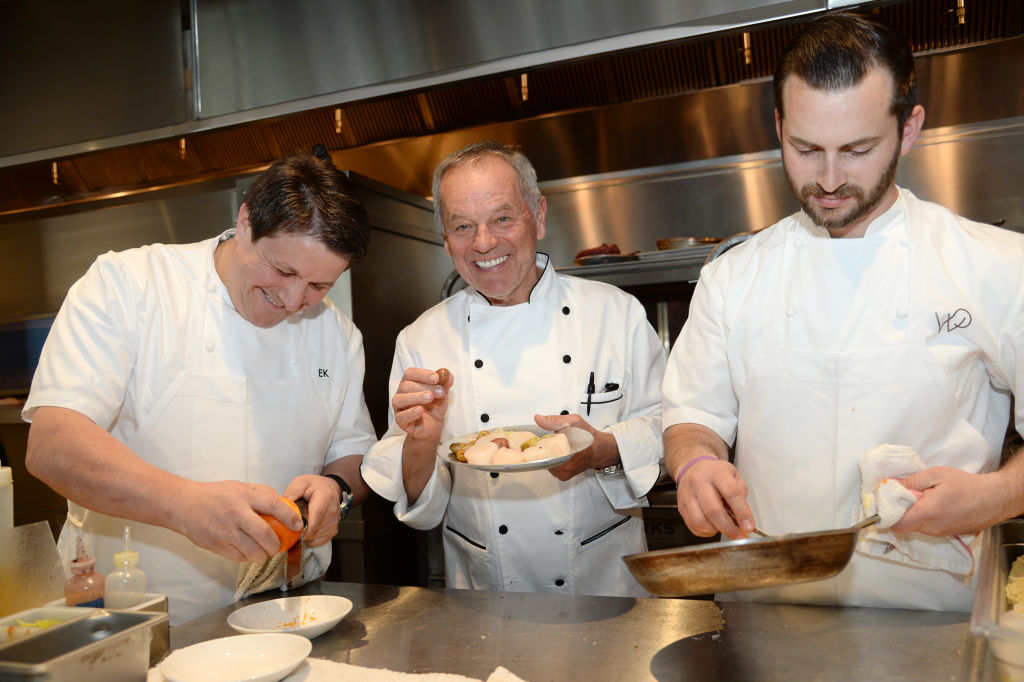 Chefs, such as Wolfgang Puck, have burned their food. | Kevork Djansezian/Getty Images

Wolfgang Puck, once a fixture on Hell’s Kitchen, told Delish about his own most memorable mistake. One Thanksgiving, he put a completed turkey in the oven to keep it warm. Instead of setting the oven to “bake,” Puck accidentally hit “broil.” He explains, “I was having Champagne in the dining room and started to smell something burning. When I opened the oven, out came a completely blackened turkey, with lots of billowing smoke.” Though he had to hide it from guests, Puck managed to take off the burnt skin and slice the turkey underneath.

13. Using salt instead of sugar 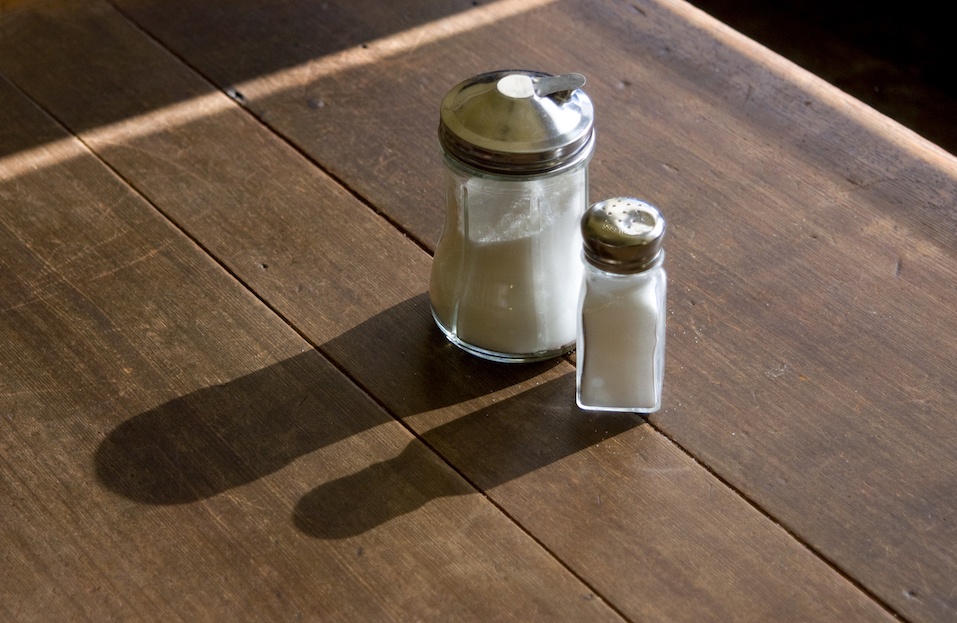 Chefs, including Chopped contestant Luis Gonzales, have mixed up the salt and sugar. | iStock.com/mitchrice

Many home cooks live in fear of accidentally swapping ingredients. But as the Food Network promises, it happens even to the best of us. While competing on Chopped, chef Luis Gonzales began work on a promising almond and black plum meltdown cake. But Gonzales accidentally used salt in the batter instead of sugar, prompting judge Scott Conant to ask the chef, “Did you taste your batter at all? I think you may have mistaken sugar for salt.” 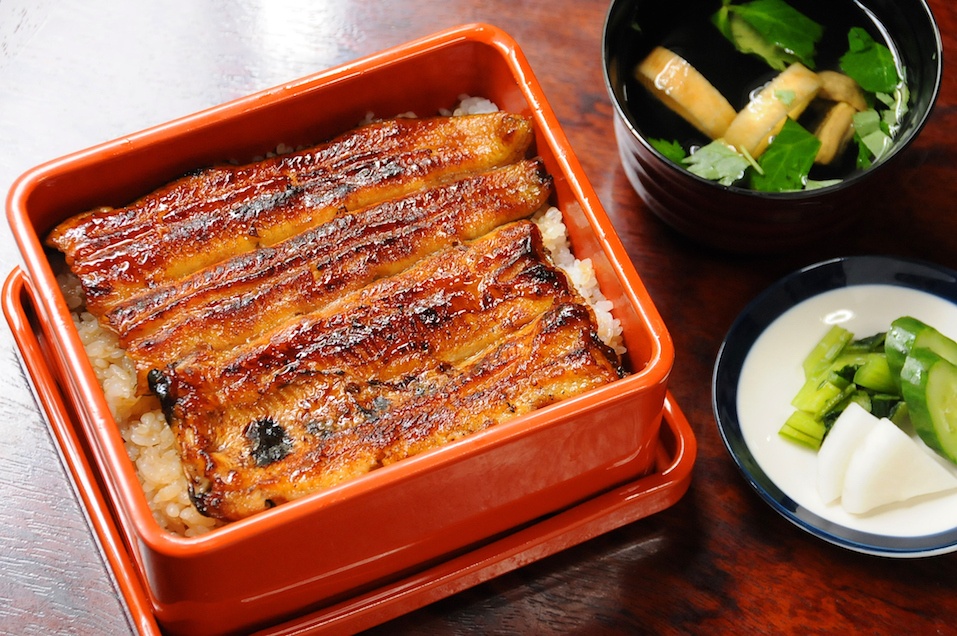 Chopped contestant John Cregar isn’t the only one to have served dangerously raw food. | iStock.com/hanasunrise

The Food Network reports chefs have made many mistakes behind the scenes on Chopped. Here’s one of the grossest. Ignoring host Ted Allen’s warning that eel blood is toxic unless fully cooked, chef John Cregar intentionally served the judges raw (inedible) eel. Talk about a major — and disgusting — mistake. As Boston.com reports, even a small amount of eel blood is enough to kill a person. The creature’s “blood contains a toxic protein that cramps muscles, including the most important one, the heart.”

11. Not flipping the cutting board

Chopped contestants have to remember to flip the cutting board. But not all of them do. | iStock.com

Whether you just cook at home or work in a commercial kitchen, you probably know you should always be careful about letting other food come in contact with a surface where you’ve cut (or rested) raw meat. But even celebrity chefs slip up. According to Food Network, Chopped contestant Marja Samsom accidentally served the judges burritos that were contaminated by raw chicken. She had forgotten to flip her cutting board to the clean side.

10. Burning yourself with boiling water 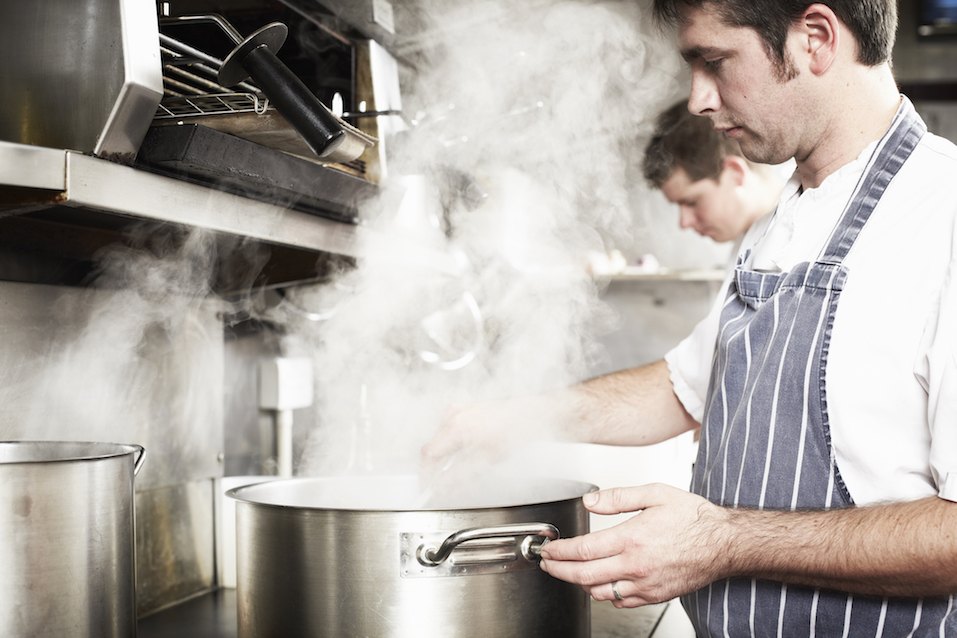 Many chefs have burnt themselves with boiling water or other hot ingredients. | iStock.com/Photo_Concepts

Second-degree burns are a pretty gruesome injury to inflict on yourself just for a chance at winning a cooking show. But that’s exactly what happened to Chopped contestant Yoanne Magris. She slipped and spilled boiling water on herself as she was running through the kitchen. She ended up with second-degree burns on both of her legs. But she toughed out the rest of the show and continued to compete.

9. Spraying a fire extinguisher all over the meal 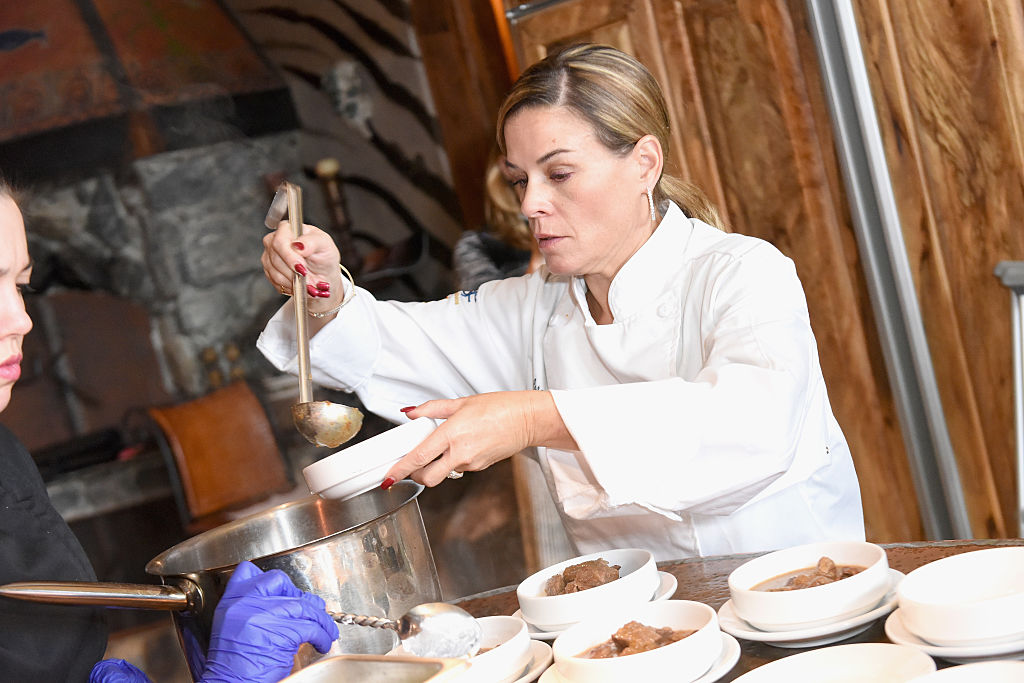 Chef Cat Cora has had to spray a meal with a fire extinguisher to put out an oven fire. | Vivien Killilea/Getty Images

There are several good ways to put out a fire. But not every scenario ends with food that’s still edible. Chef Cat Cora, who has appeared on Iron Chef America, Chopped, and Cutthroat Kitchen, tells Delish one time when she was roasting a chicken, “the oven caught on fire. We extinguished the whole oven and, well, dinner was over.”

8. Slicing a finger instead of the food 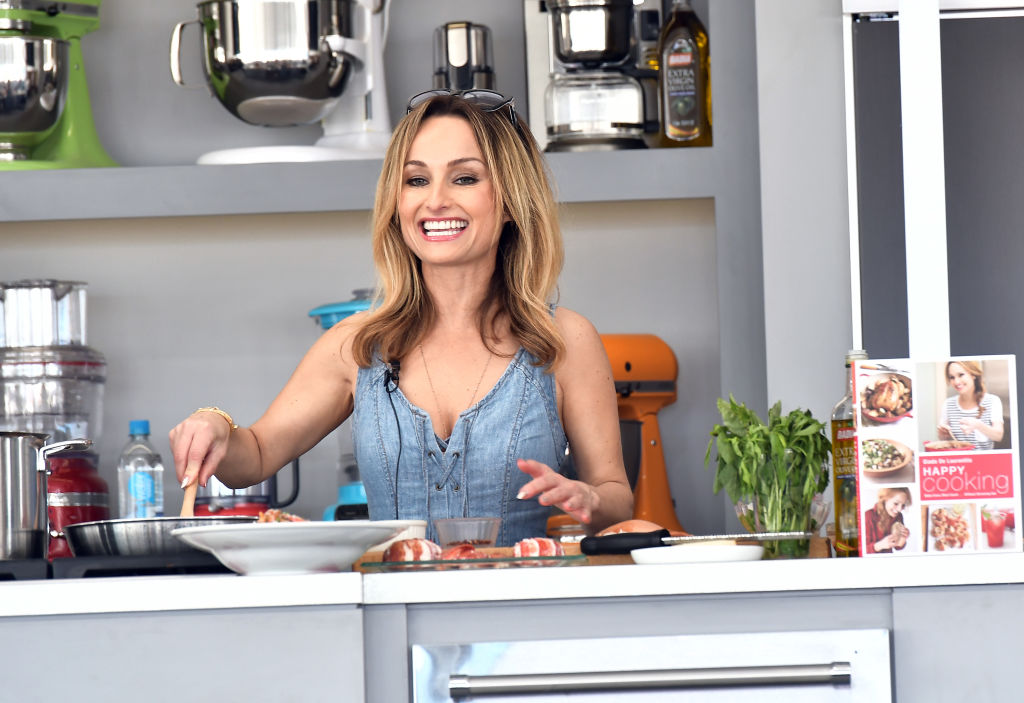 It happens all the time in real kitchens. But when a chef cooking on TV slices a finger instead of the food, it doesn’t go unnoticed. One of the most high-profile incidents was when Giada De Laurentiis sliced open her finger while filming the Food Network’s annual Thanksgiving Live special. According to The Huffington Post, producers cut to a commercial, so the chef could get first aid for the gruesome injury.

Another notable accident? Chef Gordon Ramsay sliced his finger on camera — while explaining to host Ellen DeGeneres and her audience how to avoid cutting yourself. Some producers show everything. But host Alton Brown says on Cutthroat Kitchen, “we would never show the actual moment of injury.”

7. Cutting a finger on the food processor 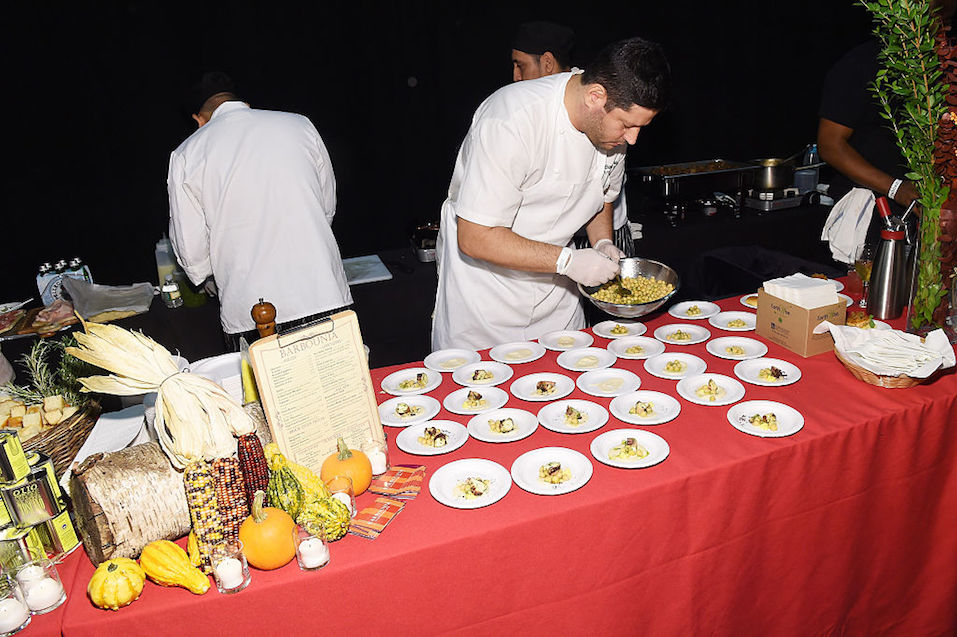 Chopped contestant Mor Amitzur once cut himself on a food processor — and got blood all over the judges’ food. | iStock.com/Larry Busacca

It’s not just knives that come into play in the kitchen accidents behind the scenes on your favorite cooking shows. Appliances with sharp blades, such as food processors, are also at fault. The Food Network reports when Chopped contestant Mor Amitzur cut himself on a food processor, he wanted to keep cooking despite the injury. “Unfortunately, that [meant] a whole lot of blood in the judges’ food.” The chef had to stop and remake his dish with gloves on — and listen to a lecture on the importance of clean cooking conditions.

6. Losing a Band-Aid in the salad 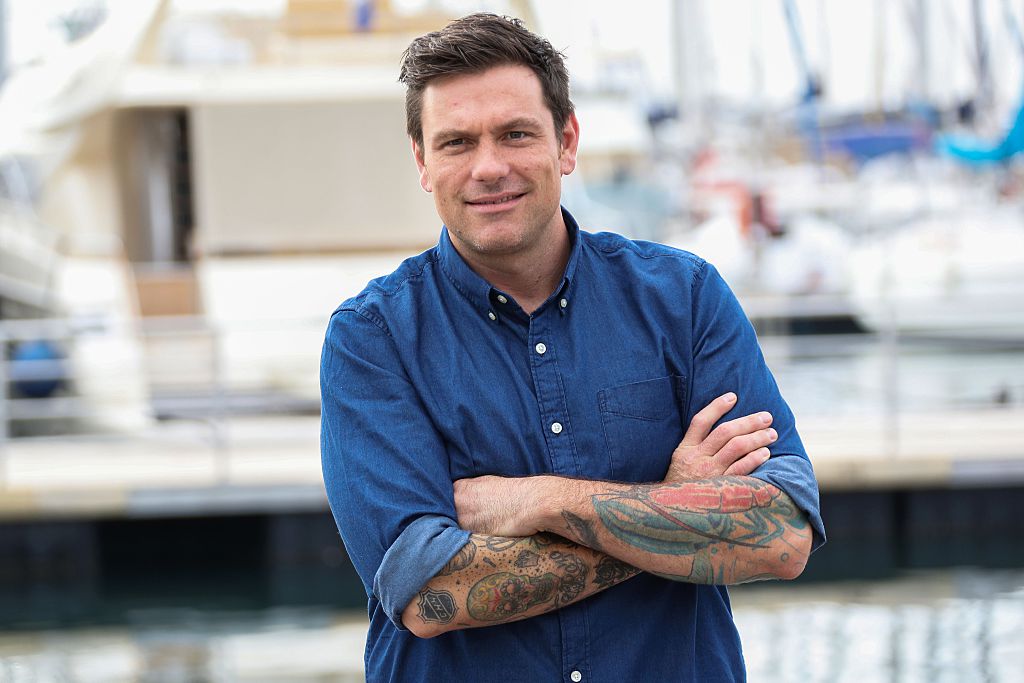 Chef Chuck Hughes once lost a Band-Aid in the salad. | Valery Hache/AFP/Getty Images

There’s a reason why many cooking shows require chefs to wear gloves after they cut themselves and apply a bandage. Chuck Hughes of The Next Iron Chef, Chopped Canada, and Unique Eats tells Delish one night at the beginning of his cooking career, he cut himself and “put a Band-Aid on quickly. I was going about my thing, then all of a sudden I had made seven salads and realized I didn’t have my Band-Aid on.” He adds, “I was yelling, ‘Oh my God! Bring the salads back!’ It was a garnish right on top!”

5. Tossing a salad without gloves — and with a bloody finger 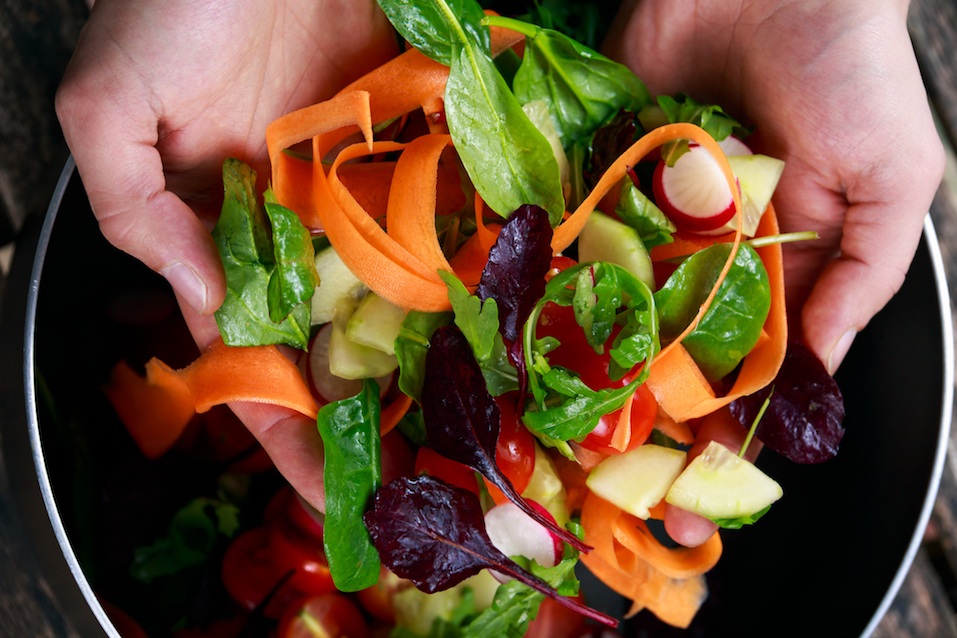 The Food Network also recounts a Chopped episode when chef Barbara Esmonde cut herself. Following protocol, she put a glove on after dealing with the cut. But she abandoned that protocol when the glove got in her way. She ripped the glove off, forgetting about her cut, and proceeded to “toss salad with bloody fingers.” You can be sure that’s a food-safety violation.

4. Charring your hands, not the food 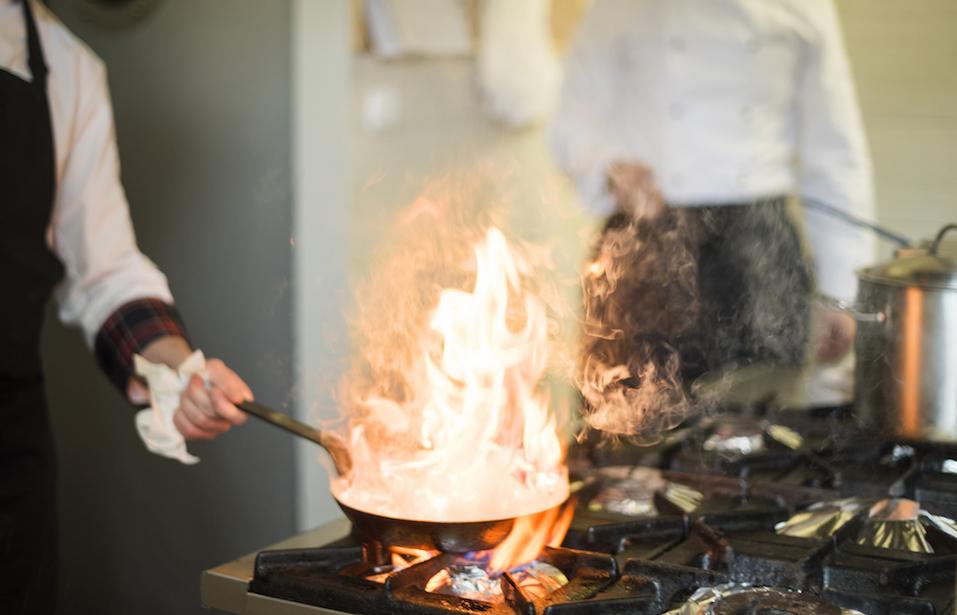 The Food Network notes the stress of competing on Chopped sometimes makes contestants do crazy things. A gross example? Chef Gemma Gray once ran across the kitchen with a flaming pan in her hands. “Ignoring Ted’s yells of, ‘You can’t run through the kitchen with that,'” she rushed “to put out the oil fire, badly burning her hands in the process.”

3. Bleeding on the food 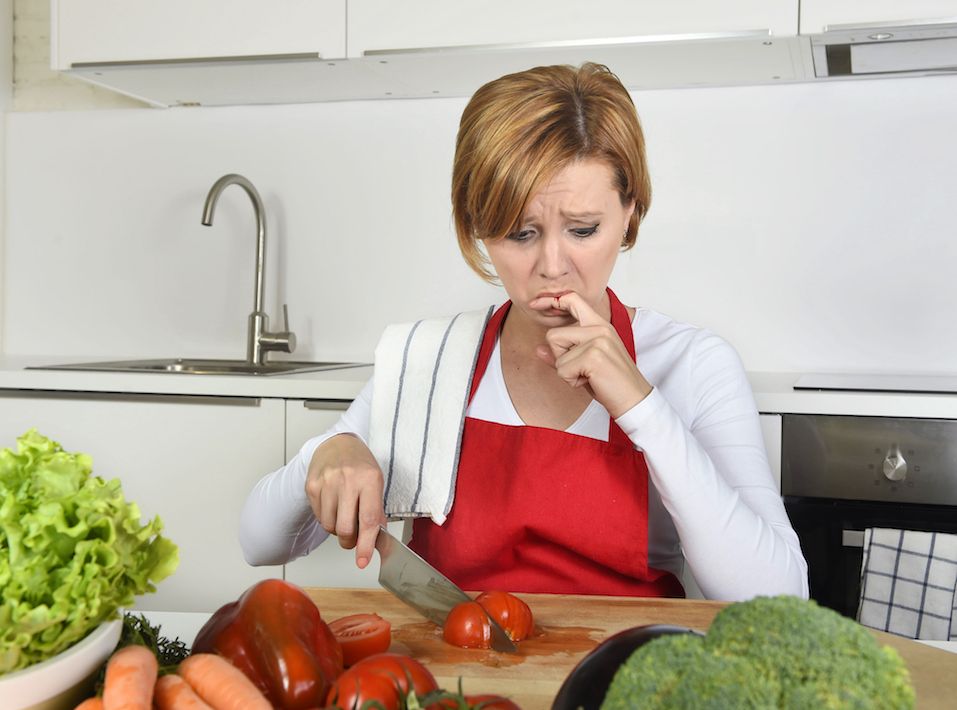 In a busy kitchen or on a stressful competition, knife mishaps happen. But in most cases, chefs get themselves bandaged up before they bleed into the food. Not in the case of Chopped contestant Derrick Prince. The Food Network explains while plating his dessert, Prince discovered he’d cut his finger. He reasoned “there’s no way anything could be contaminated … this had to have just happened.” But producers found enough blood around the kitchen to pronounce the dish contaminated and unsafe for consumption. On a separate episode, chef Kent Rollins cut himself badly enough to contaminate his dessert, and it cost him the win.

2. Developing frostbite thanks to liquid nitrogen 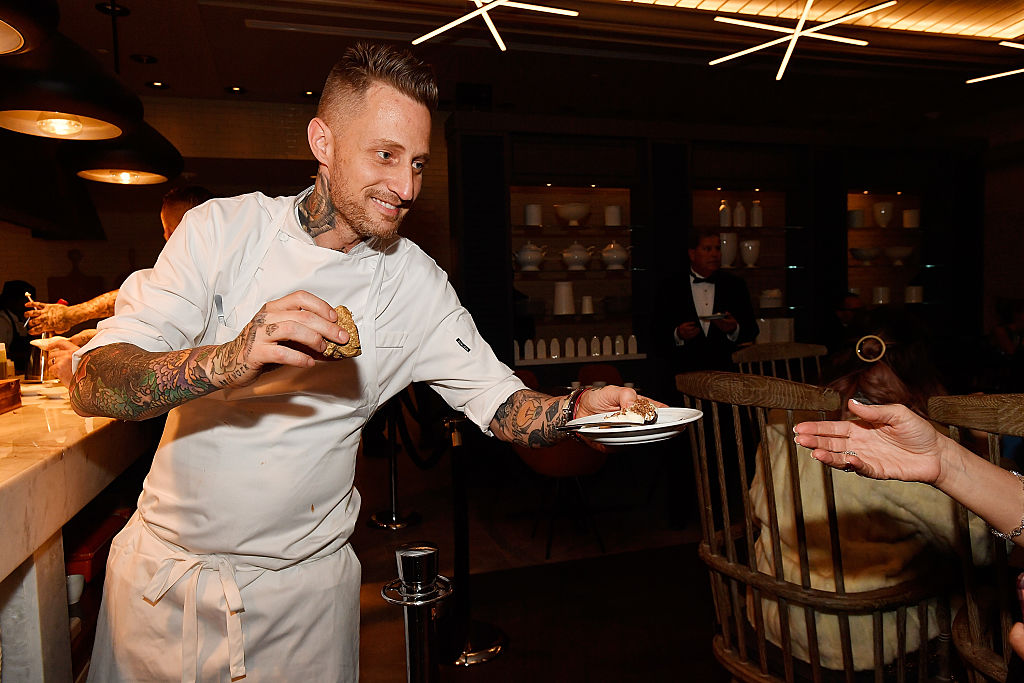 Top Chef winner Michael Voltaggio tells LA Weekly his most gruesome kitchen injury happened not because of extreme heat, but because of extreme cold. During a competition, he was filling a container with liquid nitrogen and had his thumb bracing the inside of the container. He ended up with frostbite, a condition in which the skin and the tissue below it actually freeze.

He explained of liquid nitrogen, “You can touch it, like it usually doesn’t hurt you, but my thumb had gotten numb from the vapors from the nitrogen. So I didn’t realize that my thumb was actually just in it the entire time I was filling up the container, and I ended up with my thumb turning completely black and half of it eventually, like, rotting off and so forth.” Pretty gross, right?

1. Catching your hand in a blender 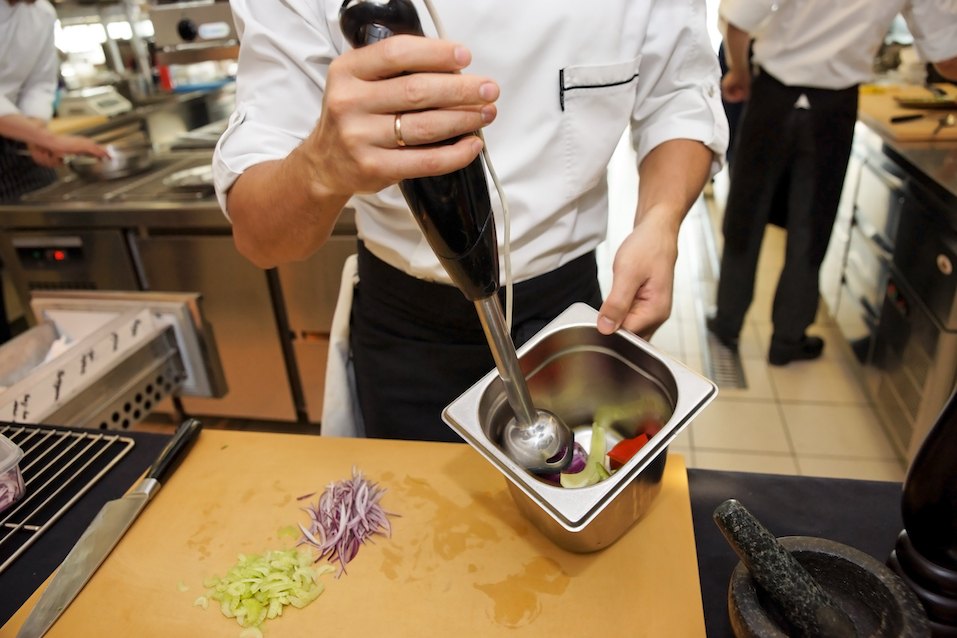 Chef David LeFevre had a nightmare come true and got his hand stuck in an immersion blender. | iStock.com/Kondor83

Getting your hand caught in a blender is every home cook’s worst nightmare. (It’s a nightmare chef Gordon Ramsay used as a prank.) But it’s actually happened to some people, including David LeFevre, who appeared on Hell’s Kitchen.

The chef tells LA Weekly he had used a hand blender to make an aioli. Much of it had gotten caught in the blade compartment, so he unplugged the machine and used his finger to remove the excess. Another cook accidentally plugged in the blender cord, thinking it was the cord for a food processor. LeFevre explains, “It turned on while my finger was in the blade compartment. I had five or six cuts on the first two digits of my index finger. I’ll never forget the feeling of the hand blender jolting in my one hand while my finger was caught on the other hand.”