Anyone who’s ever attempted to entertain friends and cook everything on the same day will probably tell you it scarred them for life. You find yourself willing your pigs in a blanket to bake faster while everyone else awkwardly waits around with nothing to eat. Even if you’re a stellar cook, it’s hard to recover from this situation. Save yourself the trouble by making this bacon and charred scallion dip ahead of time. It’s a total crowd-pleaser and you’ll have plenty of time to toss a salad, finish a roast, or just pour some drinks while everyone digs in. And trust us, they’ll dig in.

This appetizer is perfect for making ahead for a few reasons. Let’s get the obvious out of the way first: It’s a cold dip. For the most part, this entire category can be prepared days before you plan to serve. For this recipe in particular, the flavor actually improves if you let it hang out in the fridge for awhile. The charred scallions will release more of their flavor over time, leaving you with a dip that guarantees deliciousness in every bite. 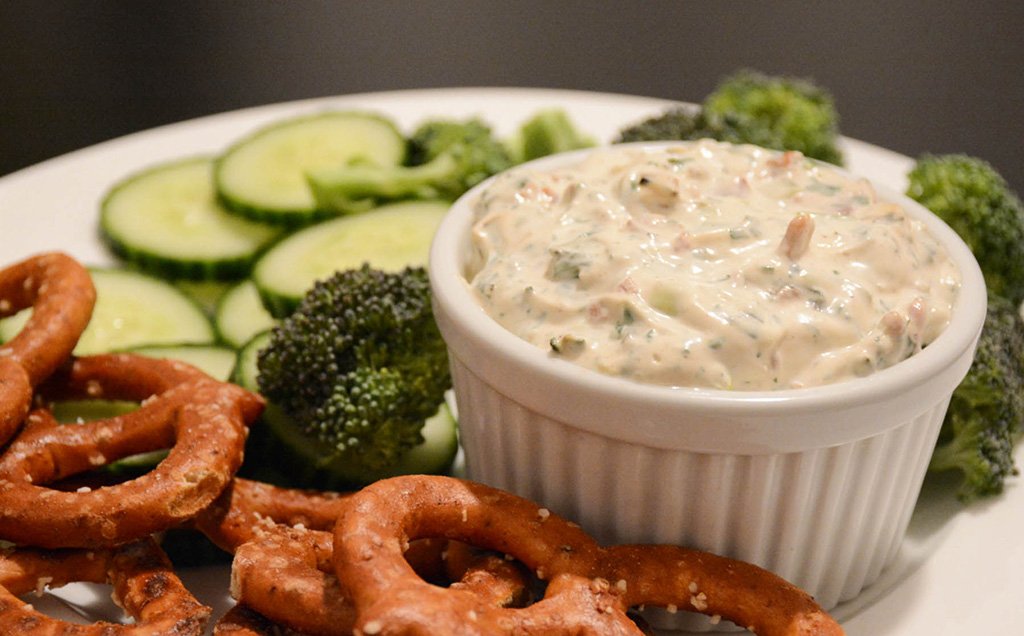 The first thing you’ll need to do is cook the bacon, which you want to do over a relatively low heat to render out as much fat as possible. Go for your biggest, heaviest skillet for this task to ensure the heat stays even and the bacon crisps all over. Cast iron should be your first choice.

The reason we started with the bacon is because it renders plenty of fat to char the scallions. You won’t need all of it, though, so drain off the excess and save it for another use. It’s fantastic for making refried beans or for roasting potatoes.

Once you have a thin film of bacon fat, crank the heat until the skillet is nearly smoking. Add your scallions, then leave them alone. You’ll get way more flavor into this appetizer if you let the scallions get really dark, so you have to let them cook for at least 3 minutes per side. Heads up — you may want to open a window or turn on a fan if you have a touchy smoke detector.

After you’re done cooking, it’s just a matter of chopping, stirring, and chilling. The beauty of making a dip for your appetizer is you can even cut up veggies in advance. But because crudités have a tendency to dry out, Today recommends wrapping your veggies in some damp paper towels and keeping them sealed tightly in zip-top bags. Add some pretzels, crackers, or chips, and you’ll have a pretty impressive spread.

Use any leftover dip as the best sandwich spread you’ve ever tasted. This recipe makes enough to serve 4 to 6 people.

Directions: Place bacon in a large heavy skillet, then set over medium heat. Cook, stirring occasionally, until fat renders and bacon is crisp, about 10 minutes. Remove bacon to a paper towel-lined plate.

Pour off all but 1 tablespoon of fat from pan. Increase heat to high. When pan is just about smoking, add scallions in a single layer. Cook, without stirring, until deeply browned on one side, about 3 to 4 minutes. Turn scallions with tongs and continue to cook until second side is deeply browned, about 3 minutes longer. Remove from pan and let cool briefly. Pat dry with paper towels.

Finely chop scallions and add to a medium bowl along with bacon, sour cream, mayonnaise, parsley, and hot sauce. Season with salt and pepper, then stir well to combine. Refrigerate until ready to use. Serve with your choice of dippers.