New York and 14 Other States With Cheap College Tuition

The number of people saving for college has hit an all-time high. So, naturally, there was a collective sigh of relief after news broke that New York would begin to offer tuition-free public college education.

However, before you blow your college savings on a new car, know the stipulations are steep. For instance, you must make less than $100,000 to qualify for assistance during the first year, students must agree to live and work in the state for the same number of years they attended college, and you must still foot the bill for other college-related expenses, such as room and board or book fees.

New York isn’t the only state hopping on board the assistance bandwagon. Other states and cities, such as San Francisco, have also proposed similar plans for assistance at community colleges. But what if your state doesn’t have an assistance plan? Could you swing college on your budget? A study from College Board ranked in-state and out-of-state tuition at public universities in all 50 states. The results? College is expensive — about $9,650 a year nationally for in-state students.

The good news is some states are more affordable than others. Let’s dive into the 15 states with the cheapest college tuition, based on 2016-17 rates.

You won’t have to beg for pennies for college tuition in Oklahoma. | iStock.com

Oklahoma is a very affordable option for families on a tight college budget. With 15 public universities to choose from, students will have no problem finding somewhere to cash in on the college experience. This state is home to the University of Oklahoma, a school known for its competitive sports teams and affordable degree programs.

Next: This state offers in-state tuition for under $8,000 and one of the nation’s lowest unemployment rates.

Higher education in either Dakota is a bargain. South Dakota actually has the lowest tuition for out-of-state residents at $11,470. But should you choose to pursue a degree in North Dakota, expect a good return on your investment. It has a high bachelor’s degree completion rate and is among the states with the lowest unemployment rate at 2.8%.

The Midwest continues to dominate the college tuition leaderboard with the Cornhusker State coming in 13th for cheapest college tuition. Going to school in Nebraska might seem dull at first glance, but with all the money you save in tuition, students can afford to have a little extra fun. Lincoln, Nebraska, is home to the University of Nebraska, and the town is known to cater heavily toward students.

These students are all smiles because they found a good deal for their college education. | mangostock/GettyImages

In the Northeast, we find the state paving the way for college-assistance programs. Even without New York’s free tuition plan that’s estimated to help over 200,000 students, the state would still have the 12th cheapest college tuition in the nation. And that’s something that benefits all households, regardless of income. However, recipients who receive this monetary aid must enroll at a State University of New York or City University of New York.

Morgantown, mountaineers, and a certain John Denver ballad might come to mind when thinking about West Virginia colleges. But another noteworthy fact about schools in this state is they are relatively cheap for residents. West Virginia University fees come it at about $7,632 for in-state students, as of the 2015-16 school year.

Football is life in a Southern college town. | iStock.com/33ft

Create a national list about affordability, and Mississippi will be on it. Of course, the state’s college tuition costs are no exception. With such a low price tag, families embarking on the hunt for affordable colleges should consider schools in the state. All the money saved on tuition in Mississippi can be better allocated toward experiencing everything life in a Southern college town has to offer, such as football and Greek life.

We continue our tour of the South with our No. 9 state for cheapest college tuition: North Carolina. Out-of-state tuition in North Carolina is actually the most expensive on our list of 15 states, but in-state savings make up the difference. Those with permanent residency here will pay about $2,450 less than the national tuition average of $9,650 annually.

Your eyes are not deceiving you: Alaska is actually ranked on a list of affordability. What’s even better is it pertains to higher education. If walking to class with a scenic backdrop in Anchorage or Juneau isn’t enough to sway your vote, maybe the minimal yearly tuition of $7,130 will do the trick. You’ll just need to withstand those harsh Alaskan winters. 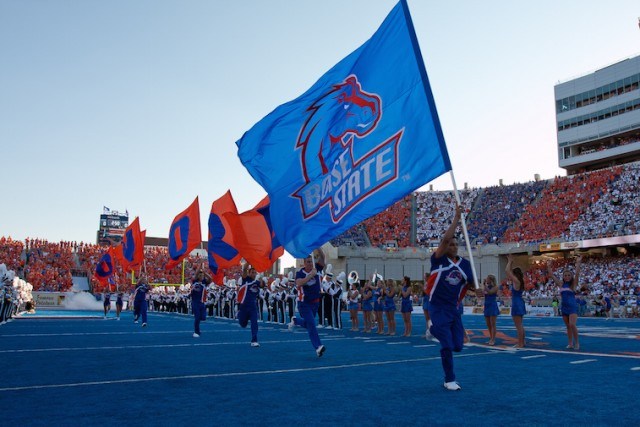 Idaho is a state that typically flies under the radar, so it might surprise you that it’s home to some of the cheapest public universities in America. It lands in sixth place for the lowest public college tuition costs. Boise State University is its largest institution and, fun fact, it is one of the only universities that offer a master’s degree in raptor biology — just in case you wanted to make studying birds of prey a career.

Even without college tuition assistance, higher education fees in Nevada are still extremely affordable. Therefore, bargain hunters should add Nevada’s public schools to their tour list. With annual costs under $7,000, students in this state are less likely to be saddled with debilitating student debt and loans upon graduation.

Maybe harsh winters aren’t what you envision your college experience to be. Luckily, warm and sunny New Mexico makes the cut for college affordability. You can almost guarantee a steep expense for books, rent, or other fees at any college in the U.S., but the tuition rates in this state are more than manageable for budget-conscious families.

We don’t have to travel far to visit our fourth least expensive state for college tuition. Utah’s fees are well within reason, falling more than $3,000 below the national average for in-state costs. Even better, graduates won’t struggle to find employment after graduation with a statewide unemployment rate of only 3.1%, as of March 2017.

Going to school in the Big Sky Country will be easy on the eyes and the wallet. Most of Montana’s public universities are located in urban areas but are within reasonable distances to many well-known national monuments and parks, such as Yellowstone and Glacier National Park. Students who are able to brave the long Montana winters will be rewarded with low tuition costs and more money available for extracurricular endeavors.

Many Americans, both young and old, flock to Florida every year. Retirees go for its warmth, and college hopefuls go for its affordability. Florida State University is a popular and affordable choice, along with many other state schools enjoying national name recognition. With average in-state tuition hovering right around $6,360, it’s no mystery why Florida is a go-to destination for people of all ages.

Residents in Wyoming will be the first to tell you college is doable on a limited budget. Here, it’s possible to spend just barely over $5,000 for one year of public college education. Even residents living elsewhere in American should consider a move to the state as out-of-state tuition is the lowest on this list.