No Pay Raise For You: Wages and Salaries In These States Are Dangerously Low

If you live in Idaho, we have some good news for you! Pay raises in your state are the highest in the nation. Everyone else: Sorry, better luck next year. The Bureau of Economic Analysis looked at 2017 earnings increases across all 50 states and compared them to 2016 data. Workers in many states enjoyed a sizable spike in wages and salaries year-over-year. But others weren’t so lucky. In fact, residents in one state (page 15) actually lost money.

There’s a strong correlation between job growth and personal wages. States that create more jobs have the benefit of labor shortages — which typically leads to higher salaries per worker as companies strive to remain competitive in among job seekers. This is the case in states like Idaho, Washington, and Utah. Other states face an unemployment rate trending higher than the national average of 4% and dangerously low worker salaries as a result.

State personal income increased 3.1% on average in 2017, according to BEA estimates. That equates to $1,736 pay raise on a $56,000 annual salary — the national average. No, it’s nothing to write home about, but still a welcomed increase, nonetheless.

These next 15 states got a pay raise, but their yearly bump couldn’t even manage cover inflation. Here are the states that fared the worst.

Folks in Mississippi may be working just as hard as others across the country, but their wages won’t show it. The state saw a personal income increase of just 2.3%, much lower than the national average of 3.1%.

In fact, wages in the Delta remained stagnant year over year when comparing 2016 data. Unemployment is also higher than average, meaning companies feel no need to post competitive wages for open positions.

Next: This state got something, but not a lot.

The unemployment rate in Missouri is 3.7%. | WorldExotc21/iStock/Getty Images

As you’ll see, middle America has an unfortunately strong showing on this list. Missouri is one of those states suffering from lack of pay raises.

BEA data says this state has a per capita personal income (PCPI) of $43,661, much lower than the national average. A slightly reasonable unemployment rate means workers did enjoy a small hike, but comparable data suggest it could’ve been much higher.

Next: The lone New England state on this list

Vermont’s unemployment rate is low, but so is wage growth. | SeanPavonePhoto/iStock/Getty Images

Vermont is sitting pretty when it comes to the unemployment rate. It’s much lower than the national average, but then again, so is their salary percent increase year-over-year. At just 2.1%, residents of the Green Mountain state are unlikely to see a pay raise of any significance in the near future.

Next: A dark future for this state

Just over 4% of people in Oklahoma are unemployed. | Saul Loeb/AFP/Getty Images

Oklahoma had a per capita personal income (PCPI) of $43,449 in 2017 — much lower than the average American income. BEA data suggests Oklahoma residents should learn to work with what they’ve got. A dismal 2% bump in pay may be attributed to a higher-than-average unemployment rate that leaves little room for competitive wages across the job market moving forward.

Unemployment in Illinois is higher than the national average. | Scott Olson/Getty Images

The correlation between unemployment and stagnant wages also rings true in Illinois. BEA data reports just a 1.9% increase in wages and salaries in 2017. This means workers earning an average salary of $56,000 only saw a $1,064 raise last year. Sorry, Illinois, maybe next year will be better.

Next: Not a lot of good news for this state

Nearly 6% of people in New Mexico are unemployed. | muha04/iStock/Getty Images

New Mexico boasts the second-highest unemployment rate in the country. With so many residents out of work in the Southwest, it makes sense that employed workers had smaller wage increases than Americans in other parts of the country. This is not good news for people trying to make ends meet. New Mexico already suffers from a PCPI of $39,023, which is no where near the national personal income average.

Next: A similarly dreary picture

The wages outlook in Wyoming is awfully similar to its southerly neighbor in New Mexico. But what’s ironic is that Wyoming’s personal income per capita is 113% higher than the national average at $56,724. Still, hardworking locals are bound to be disappointed to find their new wages hardly account for yearly inflation. Maybe 2018 will be better.

Next: Small pennies in Kentucky

Kentucky is one of the worst states for job seekers. | toddtaulman/iStock/Getty Images

A separate Wallet Hub study ranked Kentucky as one of the worst states for job seekers when it comes to economic outlook and job market. BEA data mirrors this claim, noting Kentucky workers are among the many who missed out on a significant pay raise it 2017. A meek 1.6% hike is barely noticeable to workers hoping to have a little extra spending money at the end of the month.

Next: Workers are fleeing this state

Connecticut residents already face a high tax burden. That, combined with a poor job outlook, has people fleeing the state in droves in search of something better. BEA data adds salt to the wound, suggesting workers are in for paltry pay raises now and in the future.

Next: Pay raises were barely noticeable in this state

Hint: Both Dakotas make an appearance on this list. But South Dakota fares a bit better than its northern twin. The unemployment rate here is adequate, but a sad 1.4% hike in wages is bound to erase any feelings of hope for hardworking residents in the state. To put some numbers on the board, workers earned an extra $784 in 2017 on a $56,000 income.

Next: Another year of low pay

Unemployment is low in Nebraska, but so are pay raises. | steveodonnell/Getty Images

Nebraska is yet another midwestern state that say a dangerously low pay raise in 2017. In fact, their 1.4% increase awards them an unfortunate spot in the bottom five for pay bumps, nationally. A reasonable unemployment rate suggests raises are coming soon should competition spark among workers. Here’s hoping, as help is always better late than never.

Next: A seriously small pay increase

As a “fly-over state”, Kansas can be easily forgettable. But what’s not forgettable is the 1% pay raise workers saw in 2017. This is awfully low compared to neighboring states like Colorado, whose residents enjoyed a hefty 4.1% salary bump last year.

Next: A cycle of doom in this state

Unemployment is high and wage increases are low in Alaska. | Mbarrettimages/iStock/Getty Images

Those living in the Frontier state are in for a rough go. Not only is unemployment sky high — the highest in America — but workers who have a job bring home tiny salaries with little chance of improvement. The cost of living is already high in Alaska, which means workers feel the effects of a near stagnant outlook more than most others.

Next: An increase so small, it’s hardly considered a raise.

Don’t expect a pay increase if you live in Iowa. | KudicM/Getty Images

Sure, Iowans saw an increase in wages and salaries last year, but without a microscope, it probably went unnoticed on your paystub. Workers in Iowa suffered through the second-lowest pay hike in the country — just $168 on a $56,000 salary.

They’re also one of the few states that debunk the correlation between unemployment and stagnant wages. Iowa boasts a top-six unemployment rate, so maybe 2018 will prove more profitable.

Next: The one state where workers actually lost money 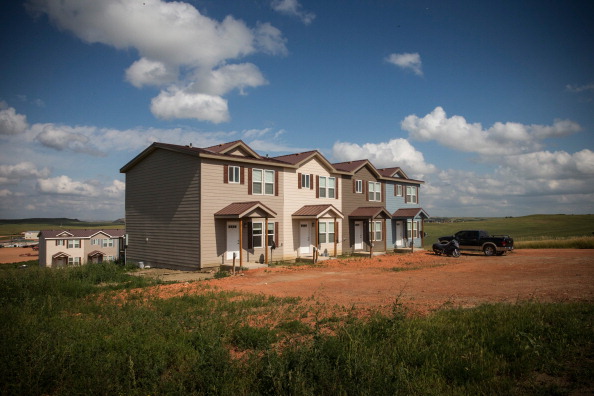 Sadly, workers in North Dakota actually lost money last year. This northern state was the only state that saw a decrease in wages and salaries in 2017, despite having a low unemployment rate. We’re unsure why this is, considering they once had the best economic outlooks in all of America, but their data is consistent with most other states in the central part of the country. And it’s bad.