Let’s face it — there’s plenty to be fascinated about regarding the British royal family. And with Prince Harry’s recent engagement to Meghan Markle, the clan is once again in the spotlight.

Queen Elizabeth II is the longest-serving monarch in British history — at 91, she has been serving her country for 65 years. The Queen has been through many challenging ordeals during her rule — and has always kept a stiff upper lip.

Eating nutritious foods that contain lots of vitamins, minerals, and antioxidants nourish your brain and protect it from oxidative stress.Perhaps Queen Elizabeth’s diet enables her to remain serene — she is a very healthy eater, eschewing carbs and opting instead for salads and lean proteins. Learn more about Britain’s beloved Queen Elizabeth’s eating habits and discover the one thing she absolutely forbids palace chefs to use in their recipes.

The Queen says no to carbs | Fred Tanneau/AFP/Getty Images)

The Queen prefers a low-carb diet, so bread, pasta, and potatoes don’t make their way onto her plate, according to the website RecipesPlus. Although she might eat some of these foods at a dinner party or on a special occasion, her daily intake typically includes big bowls of salad, fresh fruit, grilled fish or chicken, and two different vegetables.

Rare meat is a no-no for the Queen | iStock.com

According to RecipesPlus, the Queen turns her nose up at rare steak. She prefers her beef well-done, thank you very much. It appears she’s getting the proper nutrients from her well-done steak, however, because a rare steak and a well-done one provide the same amount of important nutrients, according to Livestrong.com.

Next: The Queen knows eggs-actly what she wants.

The Queen loves eggs — in fact, her favorite Christmas treat is scrambled eggs with salmon and truffle, according to RecipesPlus. The Queen would not, however, love that dozen of white eggs sitting on your refrigerator shelf. Queen Elizabeth, like most Europeans, would not understand why you put your eggs in the fridge. And, according to The Guardian, she chooses to eat brown eggs instead of white because they “taste better.” Fun fact: Queen Victoria, Queen Elizabeth’s great-great grandmother, ate her morning boiled egg in a gold cup with a gold spoon.

Next: Bread crusts — for the birds

Cut off the crusts before serving to the Queen | iStock.com/SasaJo

When the Queen does eat carbs, she likes her bread crusts cut off on her tea sandwiches, reported RecipesPlus. In fact, she is very particular about her sandwiches. For instance, the sandwich maker must butter both sides of the crustless bread for her tuna sandwich, then fill it with a mix of tuna and mayonnaise, top it with thinly sliced cucumber, and sprinkle pepper on it.

Next: The one food the Queen forbids at Buckingham Palace.

The Queen will have none of the ancient bulb. Not by itself and not in any dish that she eats. According to Business Insider, she has a large number of meet and greets on her daily schedule and she doesn’t want to offend anyone with garlic breath. She also doesn’t eat onions, another food that often causes halitosis. Too bad — she’s missing out on some significant health benefits from garlic.

Next: A seasonal eater 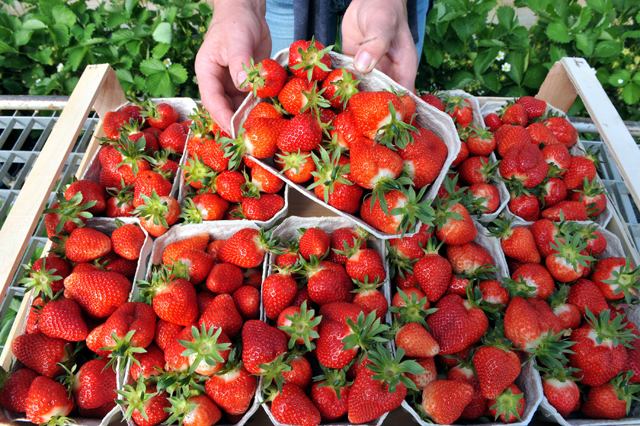 Only in-season fruit will do |ROLF HAID/AFP/GettyImages

The Queen won’t touch fruit that isn’t in season, according to RecipesPlus. For example, strawberries in January are a no-no — the Queen would balk at anything genetically modified. She absolutely loves fruit and vegetables from her garden at Balmoral castle in Scotland. It looks like the Queen is in for a whole lot of apples, oranges, and grapefruits in the coming winter months.

Next: The Queen does not eat like a monkey.

You will never see Queen Elizabeth eating a whole banana — she leaves that for monkeys, according to RecipesPlus. Instead, the uber-polite monarch cuts the top and bottom off a banana with a fork and knife, slices it lengthwise to get the fruit out, cuts it into tiny pieces, and eats it with a fork. That sounds like an awful lot of work to eat a banana, but to each her own. Ever the proper English woman, the Queen also eats pears like one would eat a boiled egg, cutting the top off and scooping out the flesh with a spoon.

Read more: Queen Elizabeth’s Dogs Get Their Food Catered (and Other Shocking Facts About the Royal Family’s Dogs)