Hot weather practically begs for meals cooked on the grill. It can be a blast seeing just how creative you can get with outdoor cookery, but it isn’t always the best option. Some days are way too hot to suffer standing over burning charcoal, and thunderstorms can also derail plans to cook out back. You’re also bound to miss some of your favorite comfort foods now that summer’s arrived. While most of those hearty dishes are too rich for this time of year, these six recipes show you some clever ways to make them just as appropriate for summer. Get ready to meet your new favorite summer dishes.

Stuffed with meat and loads of melted cheese, enchiladas make a seriously satisfying dinner. As delicious as the Mexican favorite is, it’s pretty heavy for summer eating. Homesick Texan gives the dish a lighter look with a veggie filling, but keeps the rich sauce and a sprinkle of cheese over the top. It’s the perfect recipe to make when you’re craving something hearty when it’s hot out.

While the ingredient list might look long, none of the steps are difficult. We love the deep flavor of the homemade sauce, but you could always buy a jarred version if you’re in a hurry. Serve this dish with a crisp slaw to keep the meal from feeling too heavy. A little bit of guacamole wouldn’t hurt either.

Directions: In a dry skillet set over high heat, toast dried chiles on each side until they begin to puff, about 10 seconds per side. Add enough water to cover, and bring to a boil. Remove from heat, and let cool 30 minutes. Drain chiles, and add to a blender.

Heat 1 teaspoon oil in a skillet set over medium heat, and cook one half of chopped onion for 10 minutes. Add four chopped garlic cloves, and cook 1 minute. Place onions and garlic in blender. Add chipotle, tomatoes, broth, cumin, oregano, and blend until smooth.

In a large skillet, heat 1 tablespoon oil over medium-low heat. Add the other half of the chopped onion, and cook until translucent, about 10 minutes. Add remaining garlic and jalapeño, and cook 1 minute. Add diced squash, cilantro, and cumin, and cook 10 minutes. Season with salt, cayenne, and pepper, to taste.

Preheat oven to 350 degrees Fahrenheit. Grease a 9-by-13-inch baking dish. Wrap tortillas in foil, and allow to heat in oven for 5 minutes.

Remove tortillas, and dip one into sauce, shaking off excess. Lay tortilla on a work surface, and spoon filling down center, then roll. Set into prepared dish, and repeat with remaining tortillas and filling. Pour remaining sauce over enchiladas, and top with cheese. Bake 10 minutes, or until cheese is browned and bubbling. Serve.

No heat wave should keep you from your favorite baked pasta. Running to the Kitchen shows you how to make lasagna into a perfect meal for summer evenings. And since it calls for no-boil noodles and a raw tomato sauce, this version can be on the table in just one hour.

The recipe calls for zucchini and kale in the filling, but you can change up the ingredients to suit your tastes. Feel free to use spinach, chard, peas, and even blanched green beans. Just don’t skip the ricotta, because it adds a creamy texture that gives the pasta a little bit of richness. For the best texture and flavor, look for fresh cheese.

In a small skillet set over medium-high heat, cook shallot with ½ tablespoon olive oil until softened, about 3 minutes. Add to a small bowl along with ricotta, red pepper flakes, and remaining oil. Season with salt and pepper, to taste.

Add a bit of tomato sauce to bottom of baking dish, then layer noodles to form one layer. Top with more sauce, then dollop with the ricotta mixture. Add half each of zucchini, kale, and chopped basil. Repeat layer once more, then top with remaining noodles, sauce, and ricotta. 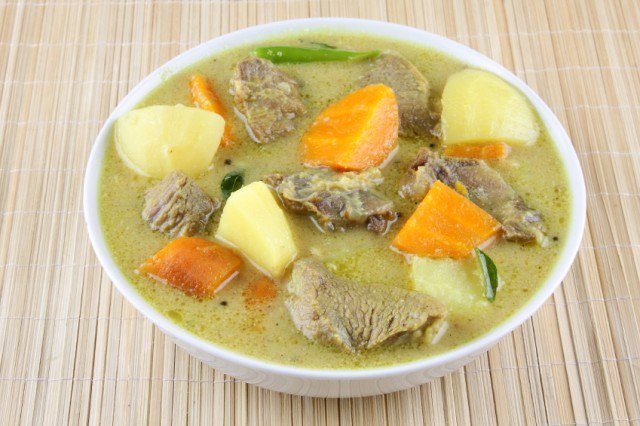 It probably sounds crazy to make something as rich as beef stew during the summer, but Bon Appétit insists this spicy dish is perfectly acceptable for steamy days. And they have a point. According to The Huffington Post, eating spicy foods in hot weather can help cool you down. On top of that, it’s a seriously tasty one-pot meal.

The method is also really simple. Start by browning the beef, then remove it to a plate once all of the pieces are deeply colored. Add the aromatics to the pot, and stir just until fragrant, then add the meat back along with some broth. Near the end, mix in some veggies, then finish with coconut milk. It’s both easy and impressive.

Directions: Heat 1½ tablespoons oil in a large heavy pot over medium-high heat. Season beef with salt and pepper. Working in two batches, and adding remaining 1½ tablespoons oil between, add beef. Sear, turning occasionally, until browned on all sides, about 5 minutes. Remove beef to a plate. 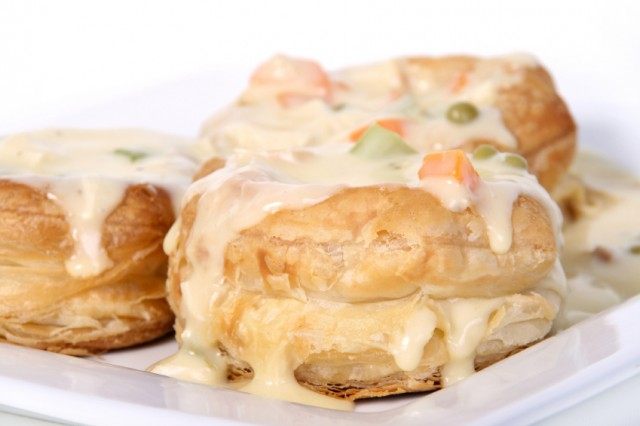 Even if you love chicken pot pie, you’d have to be a little bit crazy to make it on a day when the temperature soars. Get the taste you love without losing your cool by making Cooking Channel’s easy biscuit sandwiches. They completely transform the comfort food into perfect picnic fare. All you have to do is make a chicken filling with veggies and a bit of half-and-half, chill it, then pile the mixture into some purchased biscuits.

Directions: Melt butter in a large skillet set over medium heat. Add onions, thyme, salt, and pepper. Cook, stirring occasionally, about 5 minutes. Add carrots, and continue to cook until onions are softened and beginning to brown, 3 to 5 minutes longer. Add wine, and increase heat to medium-high. Reduce wine by half, 2 to 4 minutes. Turn off heat, and stir in half-and-half. Add chicken, and stir to coat. Transfer mixture to a mixing bowl, and refrigerate until cool, about 30 minutes.

Remove thyme sprigs. Stir in mayonnaise, parsley, celery, and peas. Season with salt and pepper, to taste. Divide salad among biscuits, and serve.

A helping of meatloaf is just as comforting as a hug, and now you can bring that same feeling to summer with Pickled Plum’s veggie-stuffed version. In addition to loading up on vitamins and fiber, adding veggies to the loaf also helps keep it super moist. There’s even a little bit of peach for a touch of sweetness.

This meatloaf is plenty flavorful the way it is, but a classic ketchup glaze is never a bad idea. It’s also insanely easy to make. Just mix two parts ketchup with one part brown sugar, and add a splash of vinegar. Lightly brush the glaze over the loaf right before it heads to the oven and it’ll form an addictive crust as it bakes.

Lay a 6-by-10-inch piece of parchment on a flat surface, and brush with oil. Pat turkey mixture onto paper, and pat into a 1-inch thick rectangle.

Lay spinach, carrot, zucchini, pepper, and half of peaches down center of meat, and fold over sides of meat to the center. Close by pinching meat together. Pinch ends closed, and transfer to a 9.5-by-6.5-inch loaf pan.

If you’re a savory breakfast lover, corned beef hash is probably one of your favorites. This chicken and veggie version from Martha Stewart Living is every bit as satisfying, but won’t leave you feeling totally stuffed. It’s filled with potatoes, corn, and tomatoes, plus some spicy chiles for a little bit of kick. For hearty appetites, top the dish with a couple of eggs.

Add 2 teaspoons oil and potatoes to skillet. Cook, stirring occasionally, until golden, about 4 minutes. Transfer to a bowl.