6 Recipes for Savory Hand Pies You Can Eat for Dinner

The handheld meat pie may be one of the most universal of foods, with almost every culture offering its own take on a little pastry stuffed with a savory, meaty filling. And it’s no wonder. Whether they come from China, Russia, or Michigan’s Upper Peninsula, these tasty delights are a convenient and filling comfort food.

While the core elements of the meat pie tend to be the same no matter its culinary origins, the specifics vary. Deep-fried or baked, with fillings include ground beef, lamb, pork, and all manner of seasonings, hand pies are incredibly versatile and incredibly tasty. They’re also ideal for today’s busy lifestyles, since most are easy to freeze and reheat for eating later, making them perfect for last-minute lunches and emergency snacking. 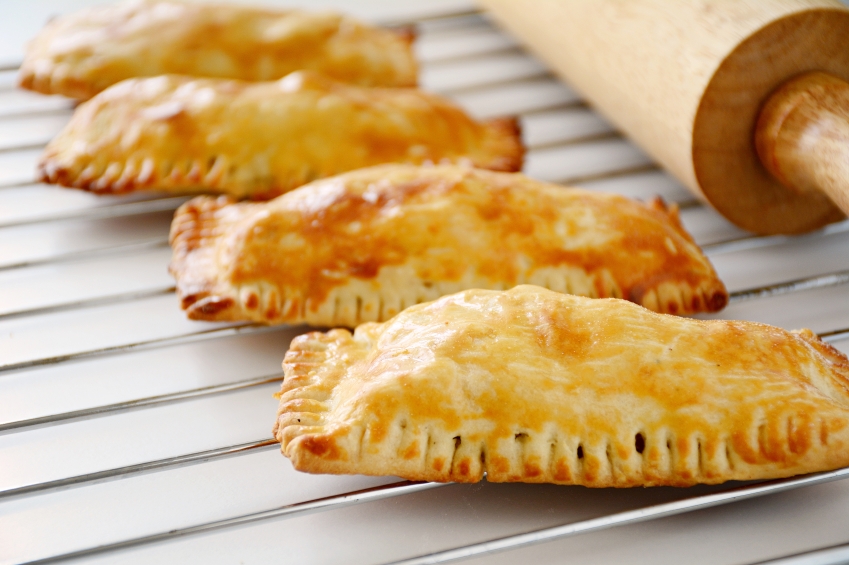 The Natchitoches meat pie is a Louisiana specialty that’s similar to an empanada. Traditionally, it’s filled with ground beef, pork, bell peppers, and a mix of spices. This recipe from Chef John Folse & Company makes 4 pies.

Heat oil in a heavy-bottomed sauté pan over medium-high heat. Sauté beef and pork until browned, stirring constantly, until all liquid has evaporated. Add onions, celery, bell peppers, and garlic to the pan and cook for another 3 to 5 minutes or until vegetables are softened.

Continue to cook meat and pepper mixture for about one hour, adding beef stock as needed to prevent sticking. Season with salt and pepper to taste. Remove pan from heat and let cool.

Roll pie dough into circles and cut each in half. Spoon a generous portion of the cooked meat mixture onto the pie crust. Whisk together the egg and water, then brush around around the edge of the shell, fold over and press the edges with a fork. Place on a greased baking sheet, make a few small slits in the dough to vent steam, and brush pie with more egg-wash. Bake for 30 minutes at 400 degrees Fahrenheit, or deep-fry the pies if you prefer. 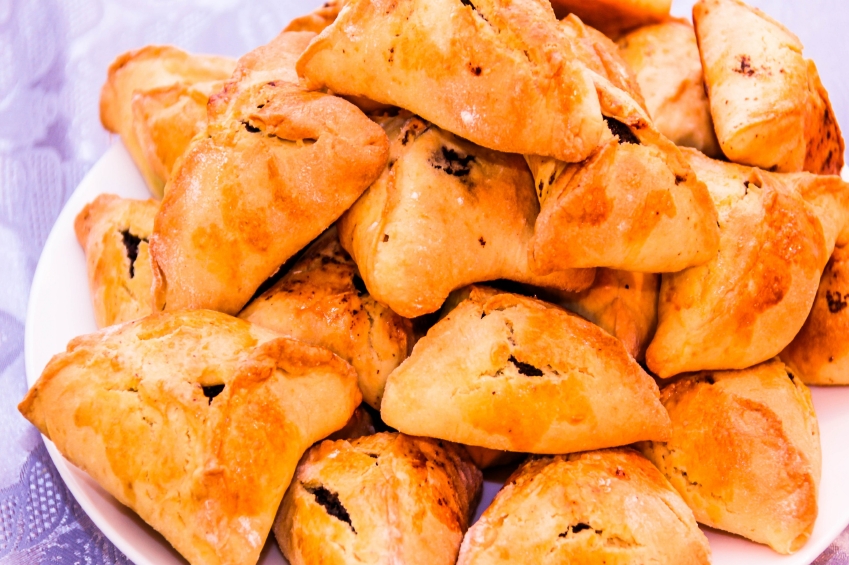 Sfeehas are a Lebanese meat pie stuffed with ground beef or lamb, tomatoes, and a mix of pomegranate molasses, tahini, sumac, and other seasonings. This recipe from Little Spice Jar makes 16 large portions or 32 bite-size appetizers.

Directions: To make the dough, combine the flour, powdered milk, yeast, salt, and sugar in a large bowl and whisk. Make a depression in the middle of the flour mixture and add the oil and eggs. Use a wooden spoon to stir the mixture as you add the water.

When the dough begins to come together, transfer it to a work surface and knead for 3 to 4 minutes (at this point, the dough will not really hold its shape). Return to the bowl and loosely cover with plastic wrap or a towel, the set aside in a warm spot to rise for 1 hour.

As you wait for the dough to rise, prepare the filling. Heat the ghee in a large skillet over medium heat. Add the onions and sauté for 3 minutes until they start to turn translucent. Add the ground beef or lamb. Cook the meat for 10 to 12 minutes, until fully browned. Increase heat to medium-high and add the tomatoes. Cook for another 8 to 9 minutes, until the tomatoes start to shrivel and most of the liquid has evaporated.

Add the salt, cinnamon, allspice, cayenne, and sumac to the pan and stir. Add the tahini paste and pomegranate molasses. Let it cook for 1 minute more. Remove from heat, add the lemon juice and chopped parsley, and let cool for 15 to 20 minutes.

To assemble the pies, divide the dough, either into 16 balls of equal size or 32 balls for appetizer-sized sfeehas. Spread some flour on your work surface. Roll each ball of dough in the flour (dough will still feel a bit oily). Roll out each ball of dough into a circle.

Line two or three baking sheets with parchment paper. Place 2 tablespoons of the filling in the center (if making appetizer-sized sfeehas, use 1 tablespoon). Grab 2 ends and lift to cover the filling. Pinch dough as you go to create a seal, stop at the center. Bring the remaining side up and pinch the center and down the two sides (you want to create a triangle shape). Place on prepared baking sheet. Repeat until you’ve assembled all the pies.

Place two racks an equal distance apart from each other in the oven. Preheat oven to 425 degrees Fahrenheit. Let sfeehas rest for 10-15 minutes while the oven warms up. Then, bake for 12 to 15 minutes or until pies turn a light golden brown. Serve them warm or at room temperature with cold Greek yogurt as a dip or lemon wedges.

Baked pies can be stored in the freezer for up to 2 months; to reheat cook in the oven at 250 degrees Fahrenheit for about 12 to 15 minutes. 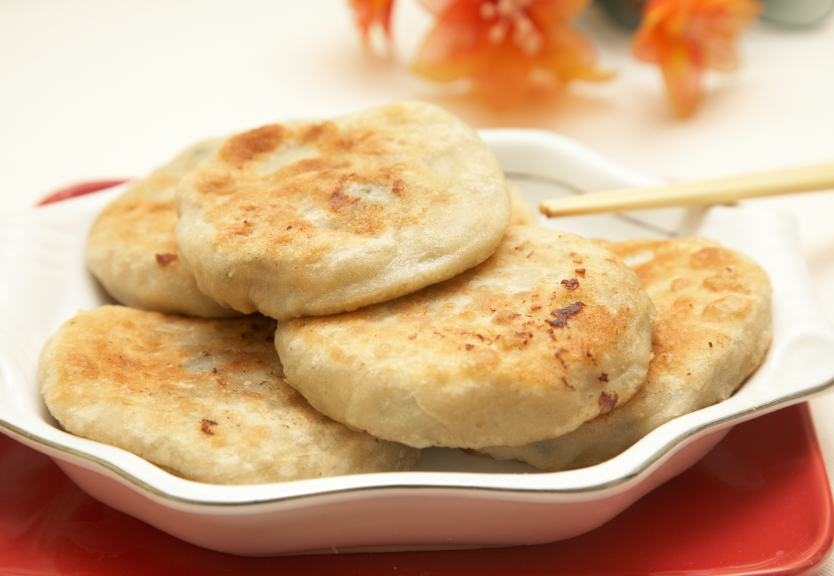 The Chinese meat pie is a bit like a larger version of a pot sticker. This version from Omnivore’s Cookbook is made with beef and scallions and seasoned with ginger and soy sauce.

Directions: To make the dough, add flour to a mixing bowl. Mix on low speed while gradually adding water. Continue to mix until the dough’s surface becomes smooth, about 8 minutes. Wrap the dough in plastic wrap and let sit for at least 30 minutes and up to 3 hours.

As the dough rests, prepare the filling. Mix the beef, ginger, wine, both soy sauces, and Sichaun peppercorns in a large bowl until the liquid is fully absorbed. Chop the vegetables.

To prepare the pies, add the vegetable oil to a small bowl. Dust a large cutting board and your hands with flour. Transfer the dough to the cutting board and knead for a few times (dough should be soft, springy, and smooth). Divide into two equal pieces; return one piece to the bowl and cover with plastic wrap.

Roll the other half of dough into a ball. Press it into a flat circle and then roll it into a thin round circle, about 1/8-inch thick. Brush with a thin layer of oil. Sprinkle lightly with salt and brush again. Roll the circle up so that you have a long tube or stick of dough, then cut into 6 equal pieces.

Cover all but one of the 6 pieces with plastic wrap. Pinch the cut sides of the piece together to seal, then roll it into thin disc (this creates a layered crust for each pie).

Add the onion, carrot, salt, and sugar to the beef mixture. Mix well. Add sesame oil and mix again. Scoop 2 to 3 tablespoons of beef filling and place it on one half of the dough circle. Fold pastry over the filling and then crimp to seal. Cover with plastic wrap and repeat the process to assemble the rest of the pies.

To cook, place a tablespoon of oil in a large non-stick skillet over medium heat. Place pies in the skillet (don’t crowd the pan) and brush with oil. Cover, reduce heat to low, and cook until bottoms turn golden brown, about 3 or 4 minutes. Flip pies, cover, and cook for another 3 to 4 minutes until the other side turns golden brown. Serve warm with black vinegar for dipping. 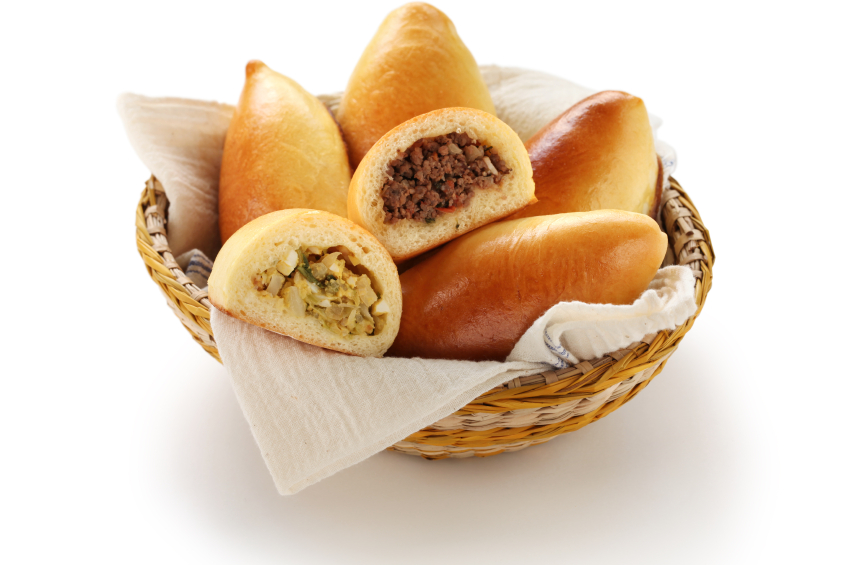 Piroshki are a Russian bun or pie stuffed with meat or other fillings. This version from the Prepared Pantry is filled with a mix of beef and onions, though you could substitute another type of ground meat if you prefer. The dough is made with sour cream.

Add the eggs and sour cream to another bowl. Whisk until smooth. Add to the flour mixture and mix until combined. Transfer to a floured work surface and knead for a few minutes, then form into a ball, cover, and let chill in the refrigerator for 1 hour.

As the dough chills, make the filling. Cook the meat in a skillet until completely browned, then add the onion and sauté for another 10 minutes. Sprinkle some flour over the meat and onion mixture and cook for another minute or so, until the juices in the pan thicken. Then add the water and stir to make a sauce. Add the sour cream, stir to combine, then remove from heat. Add the chopped hard-boiled eggs and salt and pepper to taste.

Preheat oven to 375 degrees Fahrenheit. Divide dough in half, returning one half to the refrigerator to keep chilled. Working on a floured surface, roll out the dough until it’s about ¼-inch thick. Cut into 12 rounds, each 6 inches in diameter.

Grease a baking sheet or line it with parchment paper. Use a fork to poke a few holes in each piroshki to vent steam. Lightly brush each with a beaten egg, then bake for 20 minutes until golden brown in color. 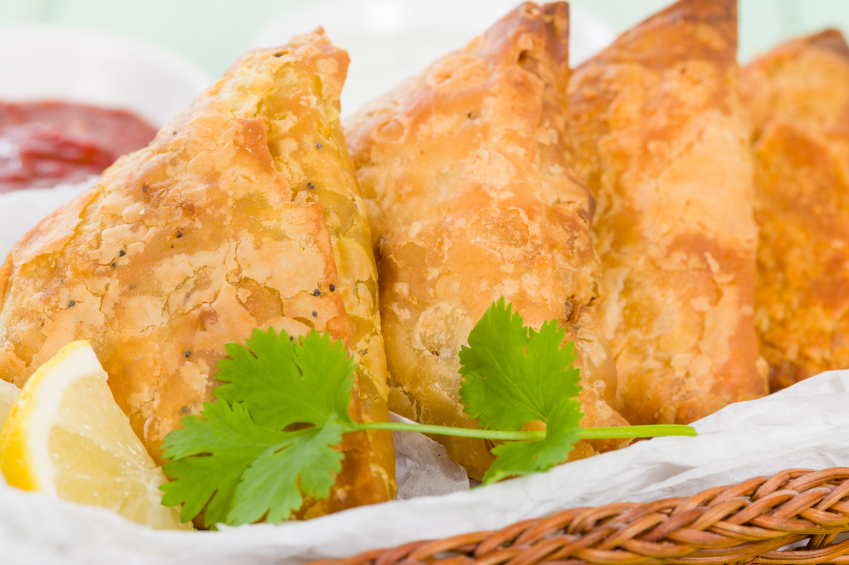 Closely related to the Indian samosa, Somali sambusas are deep-fried triangular pastries stuffed with beef or other fillings; they’re often served during Ramadan. This version from Serious Eats uses egg roll wrappers rather than homemade dough, making it relatively easy to prepare these tasty treats.

Directions: In a large skillet, heat 1 tablespoon oil over medium heat. Add the onion and cook about 4 minutes, stirring occasionally, until soft. Stir in the beef, parsley, curry powder, garlic, salt, and pepper, and cook about 5 minutes, stirring to break up lumps, until the meat is no longer pink. Taste and add more curry powder if you want. Transfer the meat mixture to a medium bowl and cool to room temperature. Wipe out the skillet.

Line a baking sheet with parchment paper. Cut each egg roll wrapper in half diagonally. Working with one triangle at a time, lightly brush the edges of the wrapper with water. Fold the long side of the triangle in half, pinching the edge to seal and form a little cup.

Place a generous tablespoon of the meat mixture into the cup, then pull the open flap of the wrapper over the cup, pressing to seal. As each sambusa is finished, place it on the baking sheet. When the sheet is full, cover the sambusas with another piece of parchment paper and continue layering with finished sambusas.

Line a platter with several layers of paper towels. In the skillet, heat about 1 inch of oil until a deep-frying thermometer reads 365 degrees Fahrenheit to 375 degrees Fahrenheit, or a pinch of flour bubbles and sizzles in the oil. Add half of the sambusas to the oil and cook for 2 to 4 minutes, turning once, until golden brown on both sides. Using tongs or a skimmer, transfer the sambusas to the paper-towel-lined platter to drain briefly. Repeat with the remaining sambusas. Serve. 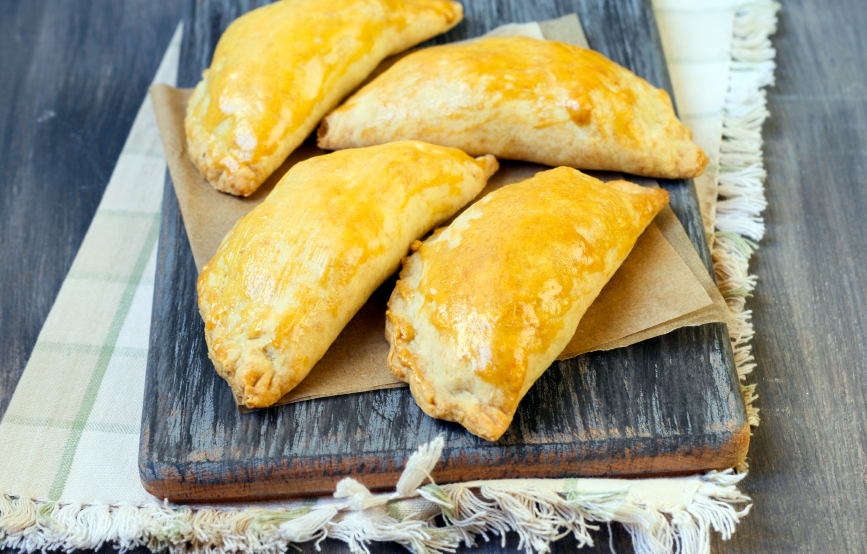 Michigan pasties are the American version of the Cornish pasties, brought to the U.S. by Cornish miners who worked in the state’s Upper Peninsula. This version from Lawry’s Pasty Shop (via NPR) is filled with beef and a mix of potato, onion, and rutabaga.

Cut shortening into flour and salt, add water and knead until well blended. Form into four balls and chill. Coat with plenty of flour and roll into circles.

Mix all the filling ingredients in a large bowl. Divide into four equal portions and place in center of each crust. Fold over and seal edges. Bake for 50 to 60 minutes.