With fall comes the desire to dig into baked goods. While many bakers go for crisps, quick breads, and cakes in the fall, you can’t forget about doughnuts. Don’t leave these treats to the professionals when you can easily make your own at home. You don’t even need any specialty equipment. There are many fall-flavored doughnut recipes that don’t require any frying or messy clean-up. Preheat your oven and get ready to settle down with a cup of coffee and an easy baked treat. 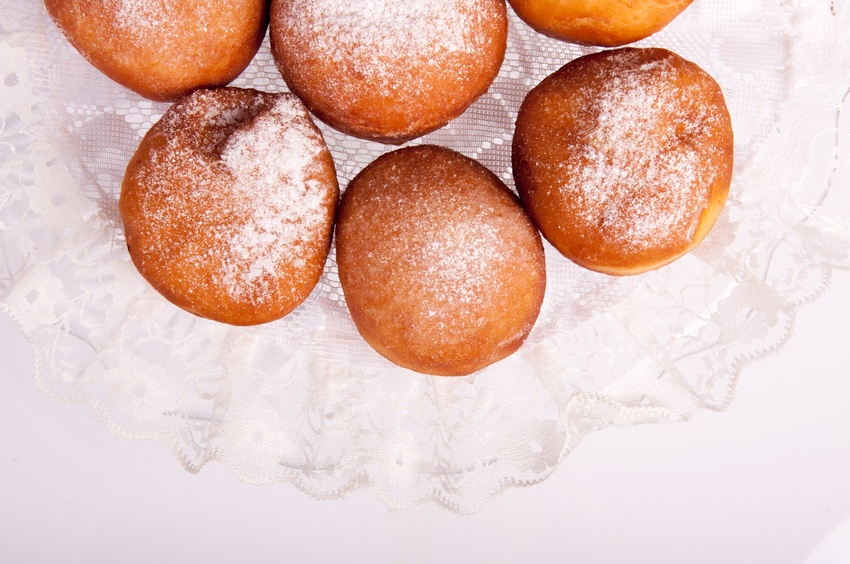 When you don’t have a doughnut pan, doughnut holes are the way to go. Apple cider and applesauce go into the batter in this recipe from Six Sisters’ Stuff, along with the other baking staples. A cinnamon-sugar topping makes them even sweeter. Enjoy them warm out of the oven for breakfast, dessert, or a snack, and they’ll quickly become your favorite fall tradition.

In a large bowl whisk flour, baking soda, salt, baking powder, and cinnamon to combine. In a separate bowl, whisk egg, melted butter, and sugar to combine. Whisk in the buttermilk, applesauce, vanilla, and cider until everything is incorporated. Dump wet ingredients into dry mix and stir just to combine. Some lumps are OK. Fill muffin cups about three-quarters full. Bake for 8 minutes, or until a toothpick inserted in the center comes out with a few moist crumbs attached. Repeat until all batter has been used.

Meanwhile, melt the butter in a microwave safe-bowl. Combine cinnamon and sugar in a small bowl.

When the doughnut holes are ready, dip in melted butter, then dip into the cinnamon-sugar. Serve.

Get creative with these chai-spiced donuts from Sally’s Baking Addiction. They’re flavored with warming spices, such as cinnamon, ginger, cardamom, and allspice. Once again, you’ll use your trusty mini muffin pan. The recipe makes 20 doughnut holes and will take you 20 minutes of prep time.

Whisk the flour, baking powder, baking soda, and salt together in a medium bowl. In a separate bowl, whisk 3 tablespoons melted butter, egg, ⅓ cup of spiced sugar, sour cream, milk, and vanilla until well combined. Pour the wet ingredients into the dry ingredients and mix just until everything is moistened. Spoon into muffin cups, filling three-quarters of the way full.

Bake the donuts for 9 to 10 minutes, or until they’re fully baked. Let the donuts cool on a wire set rack or on a large baking sheet.

To top the doughnuts, dip in the melted butter, then coat in the leftover spiced sugar.

Pumpkin purée in a glass | iStock.com

There’s no doubt we need to highlight a recipe for pumpkin doughnut holes. This baked version from Two Peas and Their Pod is the perfect treat to make this fall, featuring all your favorite warming spices. The recipe will make 24 treats, and they’ll only bake for 10 to 12 minutes.  After baking, the doughnuts are coated in a mixture of melted butter, sugar, and cinnamon. This is one recipe you have to try.

Divide batter evenly among muffin cavities. Bake for 10 to 12 minutes, or until a toothpick inserted in the center comes outwith a few moist crumbs attached.

Meanwhile, melt butter in the microwave. Mix together granulated sugar and cinnamon in separate small bowl. Let doughnuts cool briefly, then dip each in melted butter, then roll in cinnamon-sugar to coat. Serve.

Sugar and cinnamon on a table | Source: iStock.com

‘Tis the season for snickerdoodle. As good as the cookies are, we particularly like this doughnut version from Running With Spoons. Best of all, this recipe will only take you 20 minutes. That means you can whip these treats out at a moment’s notice, which is particularly great for an impromptu brunch.

In a large bowl, cream together butter and sugars with a hand mixer until pale and fluffy. Beat in the egg, milk, and vanilla. While mixing on a low speed, add flour, baking powder, salt, and cinnamon. Mix until just combined.

Divide the batter among the muffin cups, filling each cavity about two-thirds  full. Bake for 8 to 10 minutes, or until fully baked. Remove from oven and allow to cool.

For the coating, microwave butter on high for about 30 seconds. In a separate bowl, combine sugar and cinnamon. Dip each doughnut hole into the melted butter, roll in the sugar mixture, then transfer to a wire rack to cool.