5 Recipes That Let You Eat Pasta for Breakfast

Nearly everyone adores digging into a pile of pancakes or hash with eggs for dinner because it helps break up the monotony of a standard nighttime routine. We think breakfast is just as deserving of a shakeup, so it’s time to introduce a supper favorite to the morning hours. We don’t mean cold pizza, but that’s headed in the right direction since pasta can easily morph into a morning meal. See how with these five fantastic recipes. You’ll wonder why you haven’t been eating pasta for breakfast all along. 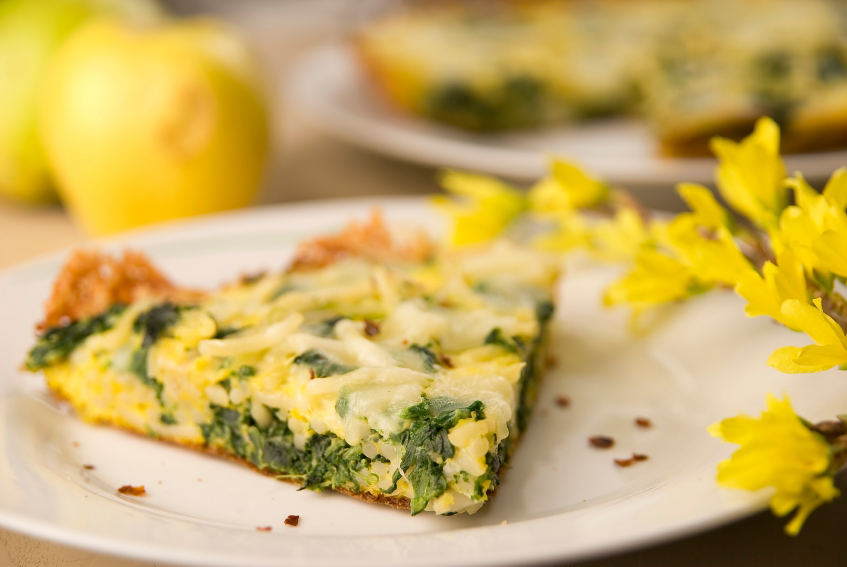 Frittata is the ultimate leftover vehicle. You can add any veggies, protein, or cheese you desire and the results are nearly guaranteed to taste fantastic. The method works just as well for cooked noodles, so you no longer have throw out your extra pasta at the end of the night. We especially like The Kitchn’s frittata with broccoli and pasta because it makes the already simple dish even easier by turning into an oven-only recipe. It also works just as well with any other cut of pasta, so don’t feel limited to spaghetti.

Heat olive oil in a large skillet set over medium heat. Add onion and cook until soft and beginning to brown. Add garlic and cook, stirring, for 30 seconds. Add broccoli, pepper flakes, and a generous pinch of salt.

Beat eggs to combine. Add ¾ teaspoon salt, some black pepper, and the cheese. Arrange spaghetti over the bottom of prepared baking dish, top with broccoli, then pour egg mixture over.

Bake for 18 to 20 minutes, or until eggs are set, edges begin to brown, and a knife inserted into the center comes out clean. Serve. 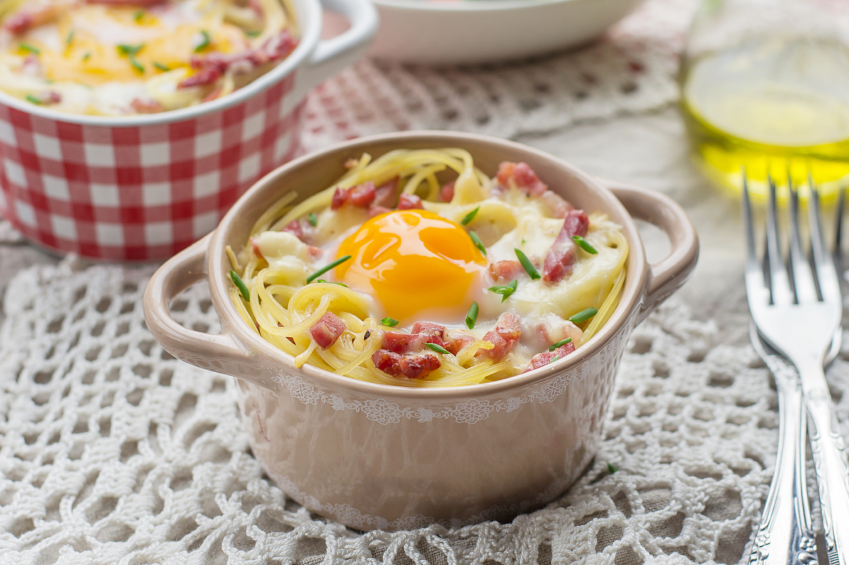 When you consider the starring ingredients in a traditional carbonara are cured pork and eggs, eating pasta first thing in the morning starts to make a lot more sense. Tasting Table takes things even further by saucing this pasta recipe with brown butter. If it sounds rich, that’s because it is. Save this one for a chilly day when you need something extra hearty to get going.

Don’t be intimidated by making brown butter if it’s new to you because the method is pretty simple. Serious Eats featured a step-by-step tutorial that shows you exactly what you’re looking for. You’ll be surprised how much extra flavor you get from this step.

Cook bacon in a large skillet set over medium heat. Cook, stirring occasionally, until fat renders and bacon crisps, about 5 minutes. Remove to a paper towel-lined plate and set aside. Add butter to pan and cook, swirling, until it foams, smells nutty, and turns golden brown, about 5 minutes. Add eggs to pan and cook, spooning butter over them to help cook whites, until whites are crisp and brown around the edges but yolks are still runny, about 2 to 3 minutes. Remove eggs and set aside.

Divide pasta among four plates and add an egg to each. Top with Parmesan and a bit of nutmeg. Serve at once. 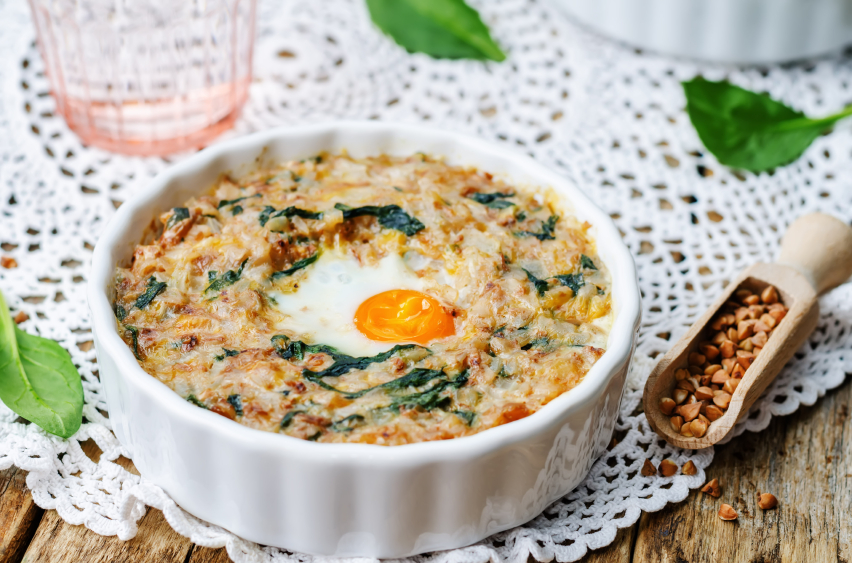 Breakfast hash easily takes on any persona, so it’s no surprise the dish is completely delicious when made with pasta. For even more Italian flavor, Half Baked Harvest adds artichokes, herbs, and fontina cheese to this savory breakfast skillet. Bacon is always great, but we particularly like spicy Italian sausage in this recipe.

Directions: Preheat oven to 375 degrees Fahrenheit. Bring a large pot of salted water to a boil, add pasta, and cook according to package directions. Drain pasta and set aside.

Heat a large skillet over medium-high heat. Add bacon and cook until fat renders and bacon is crispy. Remove to a paper towel-lined plate to drain and pour off all but one tablespoon of fat from the skillet.

Add olive oil to skillet and set over high heat. Add garlic and cook, stirring, for 30 seconds. Add mushrooms and cook, without stirring, until beginning to brown, about 2 minutes. Toss mushrooms and season with salt and pepper. Add dill, oregano, red pepper flakes. Stir in spinach and artichokes and cook, gently stirring to combine, for 2 to 3 minutes, or until just heated through. Season with salt and pepper.

Stir in half the pasta, cubed cheese, and a drizzle of oil. Toss to combine. If desired, add more pasta. Create six to eight wells in pasta mixture, one for each egg. Crack eggs into wells, season with salt and pepper, then top with shredded cheese. Drizzle cream over eggs.

Transfer skillet to oven and bake until whites are set, but yolks remain runny, about 15 to 18 minutes. If desired, brown cheese under the broiler for about 30 seconds. If you choose to brown the cheese, undercook the eggs a bit to keep the yolks runny. Remove from oven and sprinkle bacon and parsley over the top. Serve. 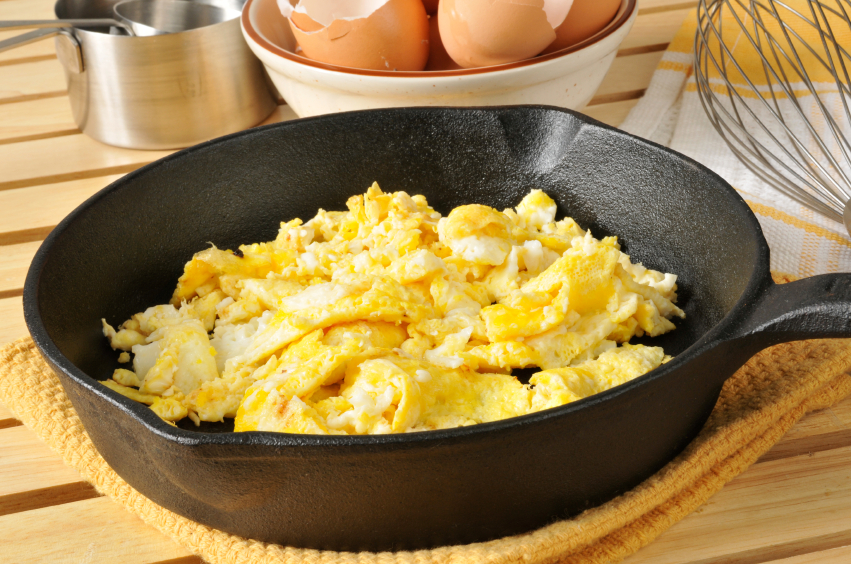 We’re all for topping our favorite foods with a fried egg, especially if that food is a burger. Still, this standard feels a little stale at the breakfast table. Spache the Spatula reinvigorates the method with this pesto pasta piled with scrambled eggs, which was inspired by a recipe from Martha Stewart’s Everyday Food. Ricotta cheese adds richness while the peas offer a burst of sweetness, making this one of the most delicious breakfasts we’ve had in a while.

Although most stores carry pretty good quality pesto, it’s remarkably easy to make at home. Make a huge batch, then freeze leftovers in tablespoon-size portions. Just dollop the pesto on parchment, freeze, then pop them into a zip-top bag once they’ve firmed up. You can add thawed pesto to soups, braises, sandwiches, or use as a dip.

Directions: Bring a large pot of salted water to a boil, add pasta, and cook according to package directions. During last minute of cooking, add peas. Drain and return peas and pasta to same pot.

Melt butter in a small skillet or saucepan set over medium heat. Add eggs to skillet and cook, stiring with a spatula, until just set.

Stir pesto into pasta and divide among plates. Top each portion equally with eggs and ricotta. Serve at once. 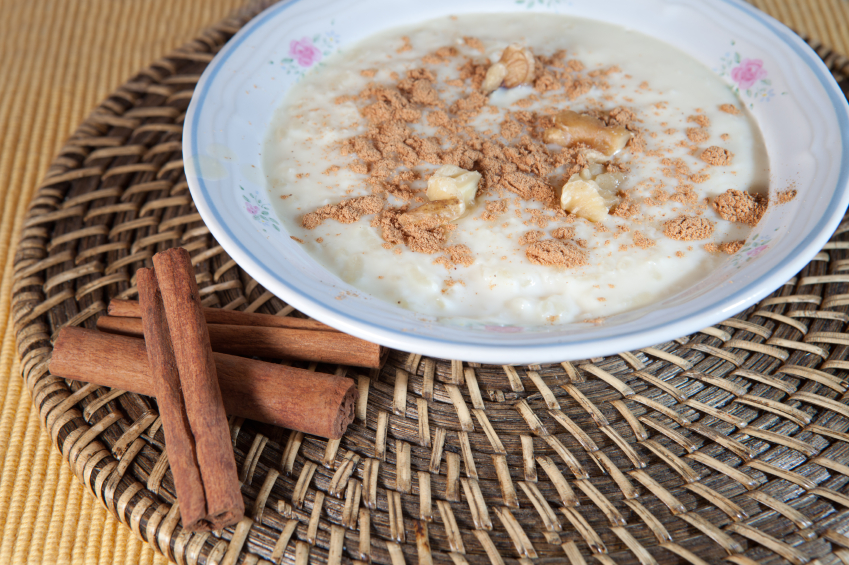 Don’t be fooled by the strange name, milk soup is a seriously delicious dish that hails from Eastern Europe. You’ll find versions using various whole grains, but pasta is just as common. For a real breakfast treat, try this nutty milk soup with cinnamon from Creative Homemaking by The Seaman Mom. Make sure to keep the heat moderate as you cook this dish to avoid curdling the milk.

While this recipe calls for vanilla sugar, you can easily substitute vanilla extract. If you’re feeling super fancy, scrape in the seeds of half a vanilla bean.

Directions: Cook pasta according to package directions. Drain. While pasta cooks, bring milk and sugars to a simmer.

Add pasta to milk mixture and cook for 5 minutes. Stir in lemon zest. Divide soup among bowls, top with nuts and cinnamon, and serve.