Choosing where you should go on your honeymoon is a big decision. But even more so for Prince Harry and Meghan Markle. The royal couple will have the eyes of the world on them when they go on their royal honeymoon. The royal family has its favorite honeymoon spots. But Prince Harry and Meghan Markle are rumored to be breaking with tradition and traveling someplace new: Namibia.

Read on to get all the details on the luxury resort where Prince Harry and Meghan Markle will probably spend their royal honeymoon.

1. Prince Harry and Meghan Markle will go to Namibia on their royal honeymoon 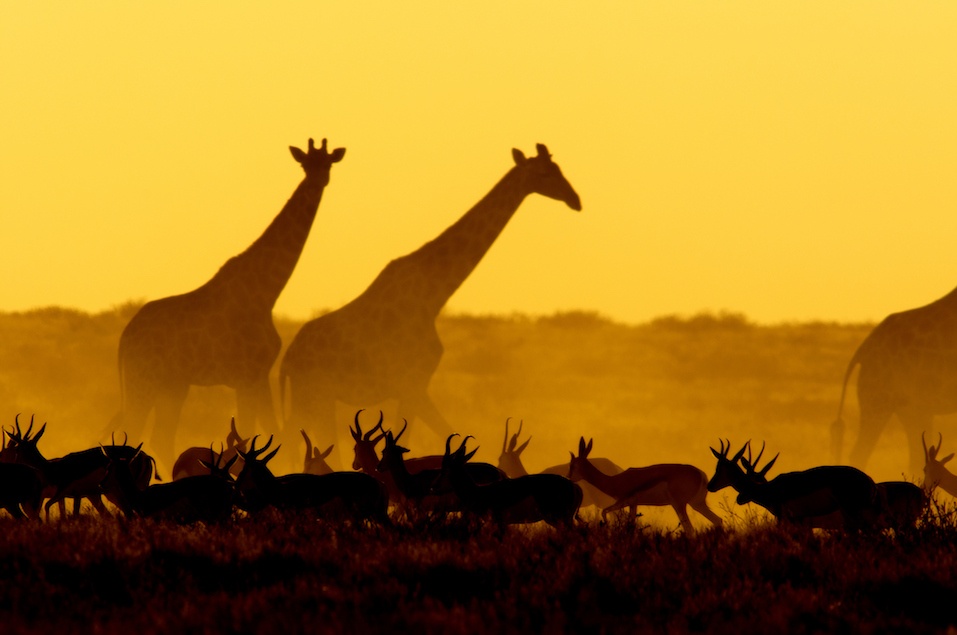 They’re certainly going off the beaten path for their honeymoon. | FernandoQuevedo/ Getty Images

Travel + Leisure learned from a source that Prince Harry and Meghan Markle have chosen Namibia, a country in southern Africa, as their royal honeymoon destination. The publication characterizes Namibia as one of the least densely populated countries in the world.

In fact, you typically have to charter a plane to get to many of the nation’s safari destinations. Namibia also remains part of the Commonwealth. Plus, it boasts some of the tallest sand dunes in the world.

Next: They reportedly plan to stay at this luxury safari camp.

2. They will reportedly stay at Namibia’s newest luxury camp Travel + Leisure reports that Prince Harry and Meghan Markle will reportedly honeymoon at Namibia’s newest luxury camp. Natural Selection’s Hoanib Valley Camp is located in northwestern Namibia’s Kaokoland. The camp’s website refers to this region of the country as “one of the most remote, wild, and marvellously unique areas of the country.”

Visitors can see “rolling dunes, rocky mountains, and desert plains all criss-crossed by ancient, dry riverbeds.” Temporary Himba settlements dot the area, and many herds of elephants and giraffes roam the region.

Next: This is what they’ll get at the camp.

3. The camp offers a luxurious home base They’ll be living in true luxury with this destination. | Natural Selection Travel via Instagram

The Hoanib Valley Camp is remote. But Prince Harry and Meghan Markle won’t want for any essentials if they do spend their royal honeymoon on the premises. According to Natural Selection’s website, visitors enjoy ensuite bathrooms with both indoor and outdoor showers. They can use Wi-Fi. They can also charge their smartphones.

Plus, they can take advantage of a complimentary laundry service. And they get all their meals and drinks onsite. The camp offers the perfect home base for Harry and Meghan to see lions, elephants, giraffes, and rhinos; meet local Herero people, and interact with giraffe researchers.

Next: Few people travel to Namibia.

4. Namibia is a unique choice We can’t get enough of these views. | Natural Selection Travel via Instagram

Lonely Planet reports that relatively few people visit Namibia. But that works in Prince Harry and Meghan Markle’s favor if they want to kick back after the wedding. “Known for its mountainous dunes, desolate Skeleton Coast and incredible desert-adapted wildlife, the country will also provide the couple with something rarely possible elsewhere in the world – absolute peace and privacy,” the publication notes.

Lonely Planet also characterizes Kaokoland, the region of the country where the couple will stay, as a “dreamlike landscape of narrow, winding valleys hemmed in by rocky cliffs” where tented safari camps remain rare.

Next: Prince Harry and Meghan Markle may do this on their honeymoon.

5. They may move around during their honeymoon, too Natural Selection also has a camp called Shipwreck Lodge on Namibia’s Skeleton Coast. So as Travel + Leisure notes, Prince Harry and Meghan Markle could choose to move around the country during their royal honeymoon. CNN reported back in April that rumors already indicated that the couple would stay “at several different lodges and safari camps owned by luxury lodge company Natural Selection.” The pair might have arranged to combine stays at the two facilities during their honeymoon.

Next: They could also add this to their itinerary.

6. They could even visit more than one country

The happy couple may even end up in Botswana. | Chris Jek/AFP/Getty Images

In addition to visiting multiple camps, Prince Harry and Meghan Markle could visit more than one country on their royal honeymoon. Business Insider learned from one travel expert that “A trip to this part of the world should always begin with Namibia and end in Botswana.”

Botswana has more luxurious camps and lodges than what you’d find in Namibia. Plus Botswana, as it turns out, numbers among the couple’s favorite vacation spots.

Next: Some people suspected this choice of royal honeymoon destination.

7. People suspected the camp as the royal honeymoon destination It costs over $600 a night to stay here. | Natural Selection Travel via Instagram

As People notes, Hoanib Valley Camp had already been identified as a likely choice for the royal honeymoon destination. The small size and remote location of the camp likely make it especially appealing to the privacy-seeking royals.

It doesn’t hurt that the luxury camp —  which costs $660 and up per person per night — offers upscale accommodations and amenities despite its remote location. Additionally, the camp is green and solar-powered. And all the materials needed to construct the tents were sourced locally.

Next: They have traveled to southwest Africa in the past.

8. The couple has already spent time together in southwest Africa 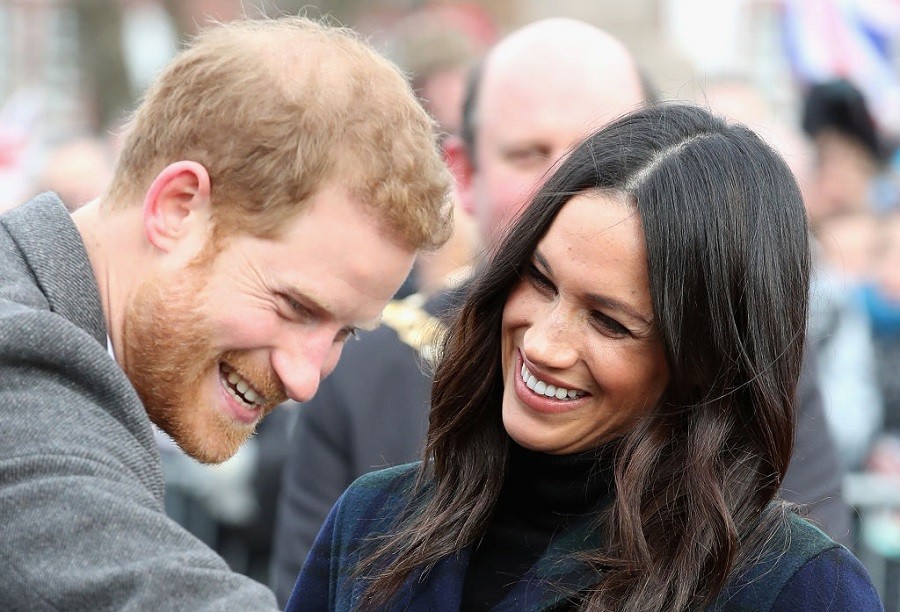 The two went to Botswana way early on in their relationship. | Chris Jackson/Getty Images

As Harper’s Bazaar reports, Prince Harry and Meghan Markle have already spent time together in southwest Africa. “Early on in their relationship, Prince Harry invited Markle to Botswana, so that they could get to know each other away from prying eyes,” the publication notes. He explained that in Botswana, “we were really by ourselves, which was crucial to me to make sure that we had a chance to get to know each other.” Plus, as PopSugar notes, Harry spent three months in Namibia in 2015. There, he worked on conservation projects and helped endangered black rhinos.

Next: They won’t go on their honeymoon right after their wedding.

9. But they won’t go on their honeymoon right after the wedding

It looks like the honeymoon photos will just have to wait. | Ben Birchall – WPA Pool/Getty Images

With this trip of a lifetime on the books, you’d think that Prince Harry and Meghan Markle would be eager to get the royal honeymoon underway. But as Cosmopolitan notes, Kensington Palace has confirmed that the pair will delay their honeymoon at least a little while after their May 19 wedding.

They will attend a garden party thrown by the Queen for Prince Charles’s 70th birthday on May 22. As Cosmopolitan notes, that means that they won’t leave for the royal honeymoon “until at least the day after that — four days after their wedding takes place.”

Next: A look at royal family members’ other honeymoon destinations.

After they were married in front of 20 million television viewers back in 2011, Prince William and Duchess Kate Middleton jetted off to the stunning islands of Seychelles. Full of white beaches across its 115 islands, the East African country is a royal and celebrity favorite.

The prince and the duchess stayed at the exclusive and private North island in a luxury villa called Villanovo, which cost an astounding £5,000 per night.

Brad Pitt and George Clooney also spent their honeymoons there, so you know it’s plush.

Next: The perfect location for sunbathing and reading 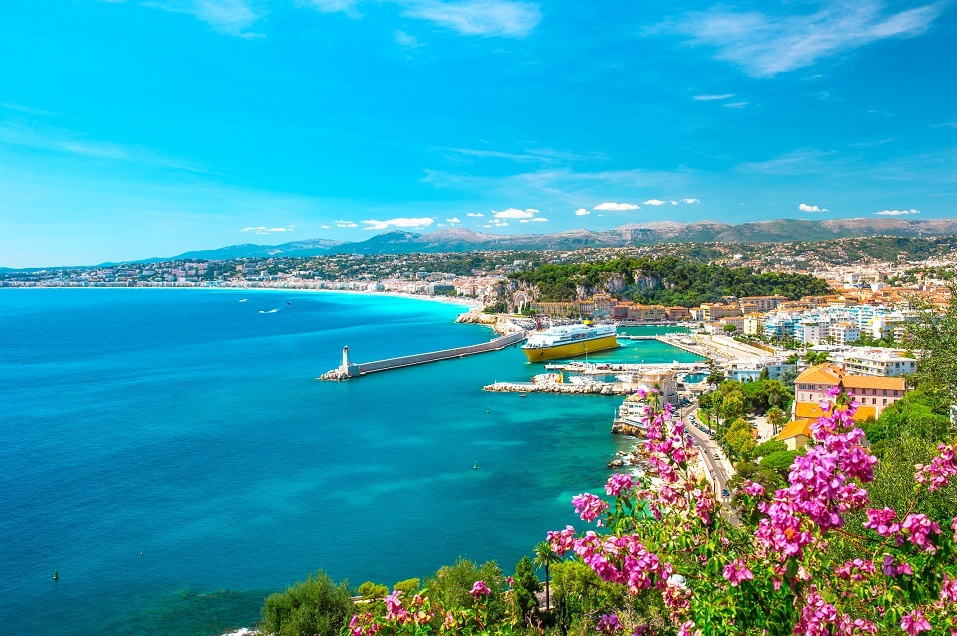 It might seem super romantic to sail around the Mediterranean sea on the lavish Royal Yacht Britannia for two weeks, but you’d have to be excited about your marriage for anything romantic to go down. After their 1981 wedding, Prince Charles and the late-Princess Diana boarded the yacht and set sail. Unfortunately, the honeymoon set the tone for their marriage.

Secret letters from the princess were unearthed later, and she described her honeymoon as the perfect trip to “catch up on sleep.”

Next: A lush green location full of nostalgia 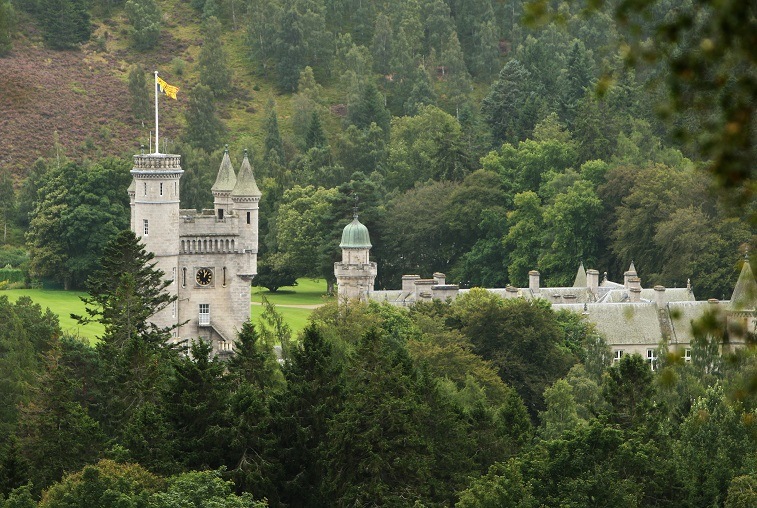 Though they might seem proper and put together, especially since they are in their wiser years, Queen Elizabeth II and her husband Prince Philip are actually super outdoorsy. It’s no wonder then that in 1947 after they tied the knot, the two decided to head to Scotland to celebrate their marriage.

They stayed on the Balmoral Estate in Aberdeenshire, Scotland. Full of lush greenery, history, and castles, this was the perfect location for the traditional couple. It was also nostalgic for the queen since she often spent her summers in Scotland with the Queen Mother.

Next: A familiar place 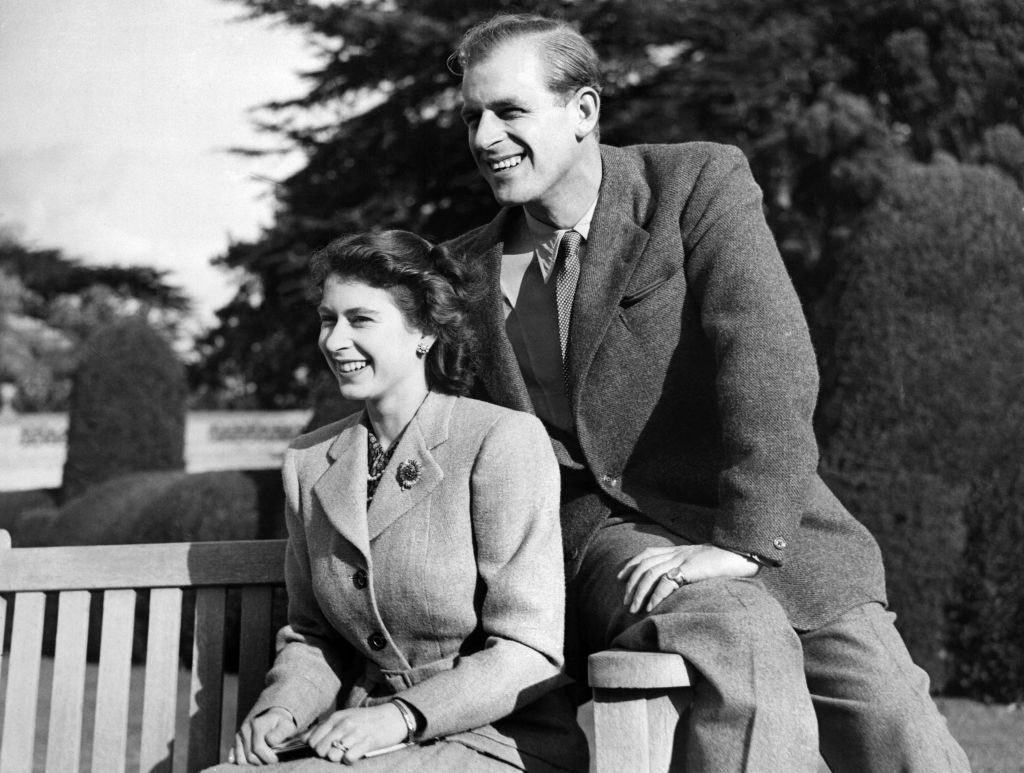 Princess Elizabeth of Great Britain and her husband Philip the Duke of Edinburgh, pose during their honeymoon, 25 November 1947 in Broadlands estate, Hampshire. | AFP/Getty Images

Preferring to stay close to home, especially since Britain was just coming out of World War II, Queen Elizabeth II and the Duke of Edinburgh first headed to Hampshire in England before heading to Scotland.

In Hampshire, which is located on the Southern coast, the young couple stayed at Broadlands, owned by Prince Philip’s Uncle Earl Mountbatten.

Next: A tropical island full of hydrangeas 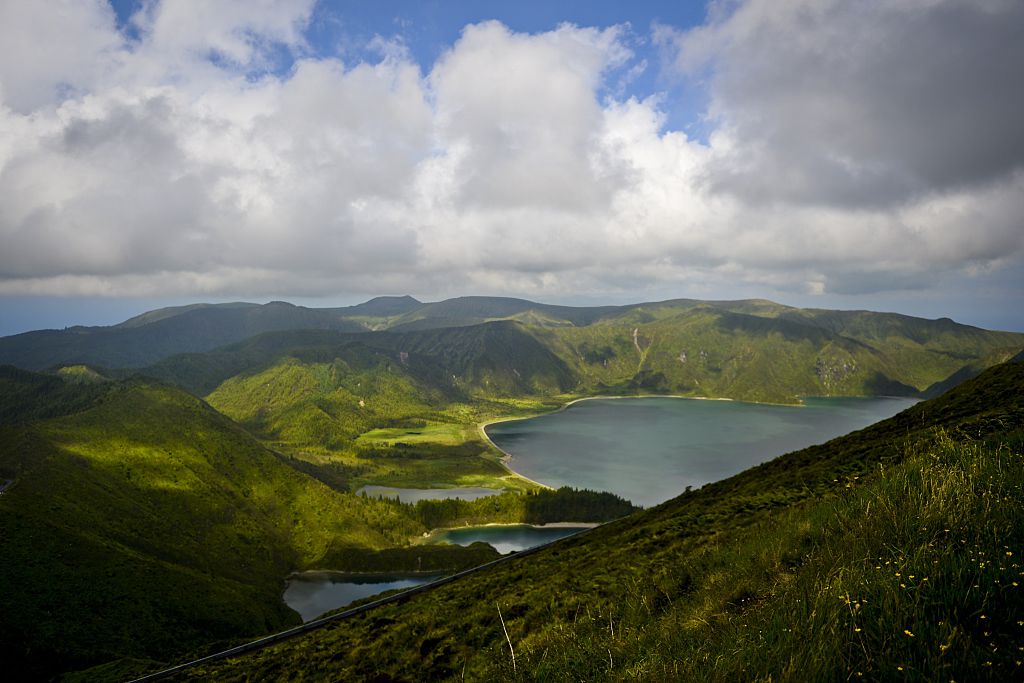 The Fire Lagoon on the Sao Miguel island, in the Azores. | Patricia De Melo Moreira/AFP/Getty Images

Prince Charles’ younger brother, Prince Andrew, might have had a tumultuous relationship with his ex-wife and current partner Sarah Ferguson, but at least their honeymoon was stunning. When the young couple married in 1986, they hopped on the Royal Yacht Britannia and sailed to the Azores Islands near Portugal.

The Azores are full of astounding landscapes that include miles of green pastures and rows of blue hydrangeas. The views had to be out of this world.

Next: A  Scottish location perfect for fishing 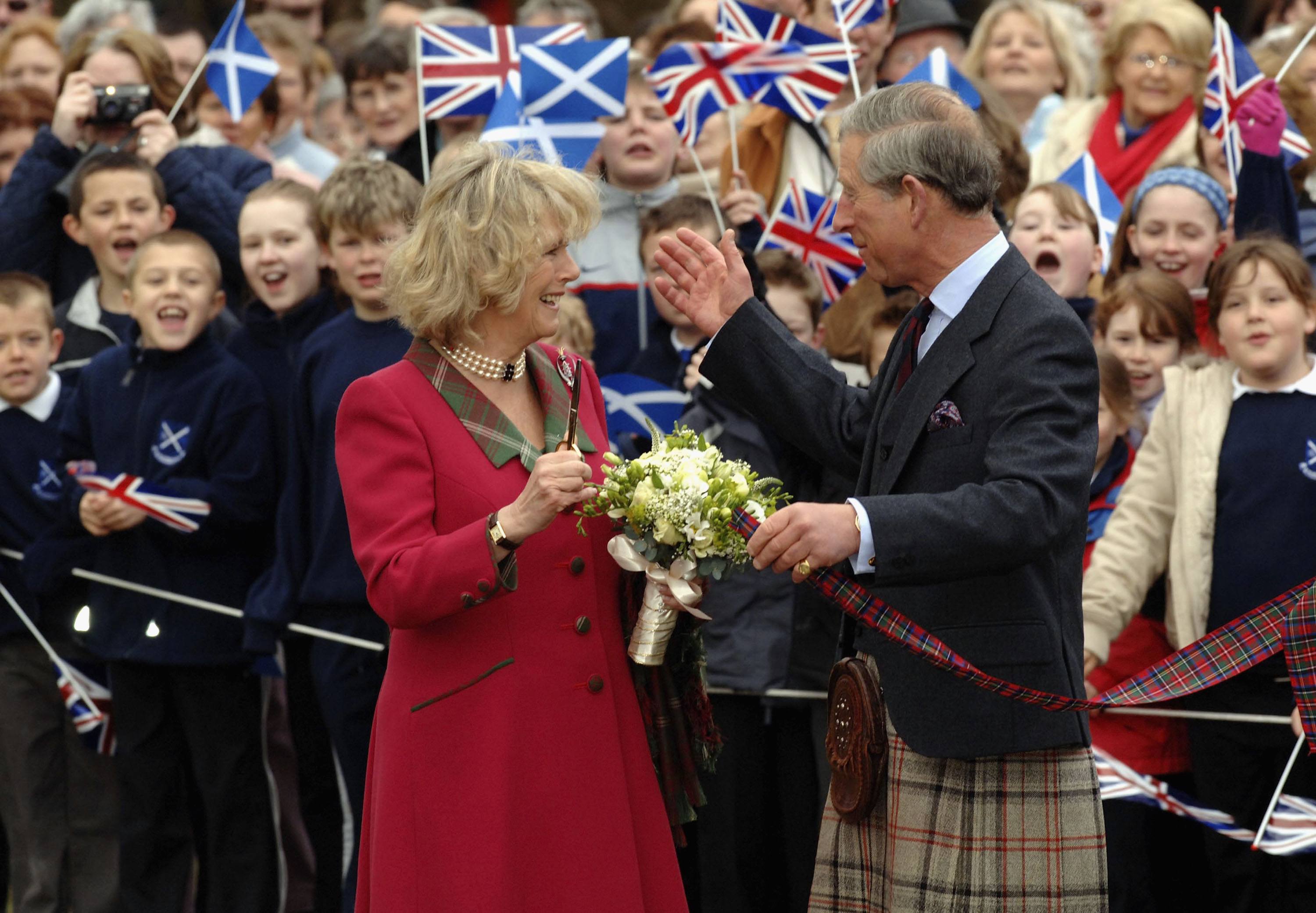 TRH Prince Charles, the Prince of Wales, and his wife Camilla, the Duchess of Cornwall take time out from their honeymoon at Birkhall on April 14, 2005, in Aberdeenshire, Scotland. | Getty Images

In 2005, Prince Charles and Duchess Camila finally wed and to celebrate, the couple set of to Birkhall, their private residences located in Scotland. On the estate, the prince and Duchess of Cornwall enjoy fishing and walking the vast grounds.

After some rest in Birkhall, they set off aboard the yacht of their friend, billionaire Spiros Latsis, where they cruised around the Greek Islands.