Now that chillier days are here, it’s time to start thinking about warming foods. Though slurping soup is arguably the best way to achieve the desired effect, we feel like sandwiches warm the soul. They’re also a lot more informal, which is exactly what you want when you’re enjoying a few drinks with friends. Inspired by French onion soup, we created these sandwiches filled with gooey Gruyère cheese, juicy steak, and heaps of caramelized onions. 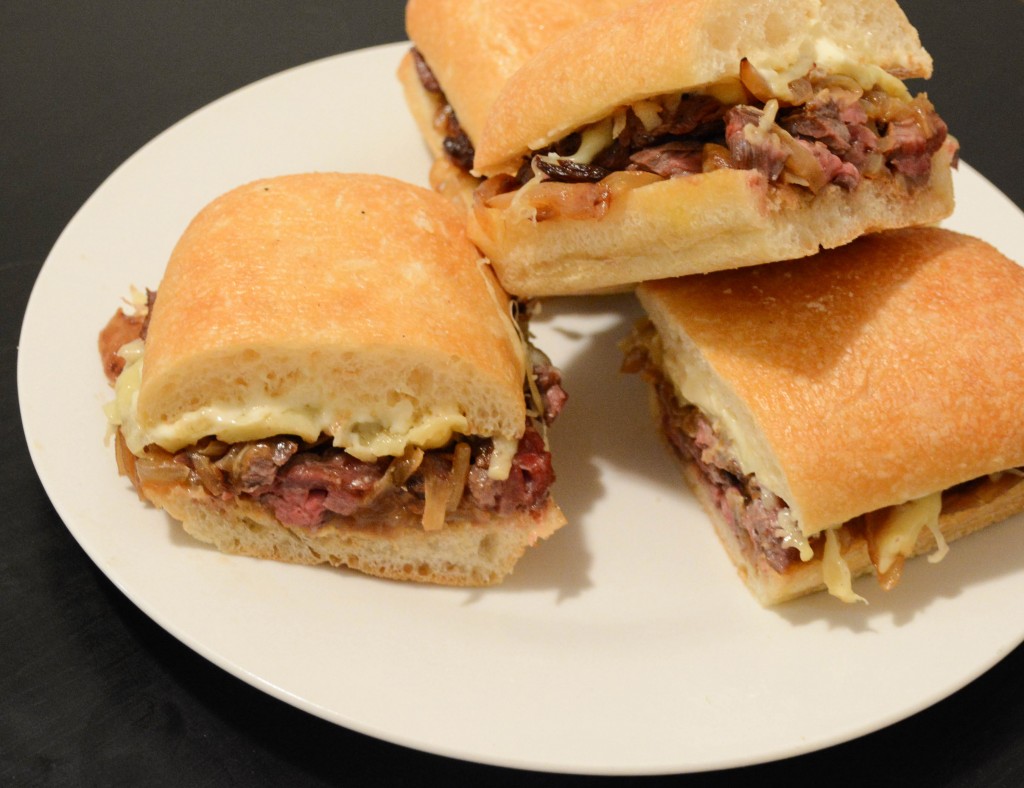 In addition to being completely delicious, French onion soup comes with a great story. According to the tale, King Louis XV needed to rustle up a meal when he found himself with nothing more than onions, champagne, and butter. Using these ingredients he made the first iteration of the now iconic meal. The story probably isn’t true, especially when you consider the star vegetable has always been considered a peasant food and stretching it into soup makes the low-cost vegetable even cheaper.

Still, we can all agree this soup is tasty stuff. It’s also relatively difficult to eat. How exactly are you supposed to consume that cheese-covered crouton without making a mess? And let’s be honest, sipping beef broth just isn’t as appealing as biting into a good steak. In order to tackle both issues, we turned the meal into sandwiches piled with plenty of medium-rare beef.

To keep things as easy as possible, you’ll use the same skillet for both the steak and the onions. Start by patting the meat dry to help promote browning. This step is especially important for skirt steak since it cooks so quickly. You can use another cut if you’d like, but keep in mind it will lead to a longer overall cook time. Season the meat with salt and pepper, then let it cook a few minutes on each side.

Skirt steak can vary quite a bit in thickness, so use an instant-read thermometer if you’re not 100% comfortable with judging doneness. As soon as the meat is finished, move it to a plate, then give the skillet a quick wipe with a paper towel. Cooking the steak first also guarantees it has a chance to fully rest before you slice it, which will helps retain the juices.

Next, add the onions to the pan and sweat them as you would for any soup. Once they get really soft, turn the heat down to medium-low. This part takes some patience, but it’s really necessary. If you try to do the whole process over higher heat, you’ll end up with burnt onions instead of soft, sweet ones. It will take longer than 30 minutes, and it will be totally worth it — we promise.

Once the onions are soft and brown, add a splash of stock and a bit of Worcestershire along with the most critical ingredient: the juices that have accumulated around the steak. This simple step adds a huge amount of flavor.

From here, the rest of the process goes quickly. Layer onions, sliced steak, and more onions on some sandwich rolls. We like a generous amount of Gruyère cheese, though a basic Swiss will do. Toast the sandwiches, spread on a little mayo, and get ready for what may become your new go-to sandwich. 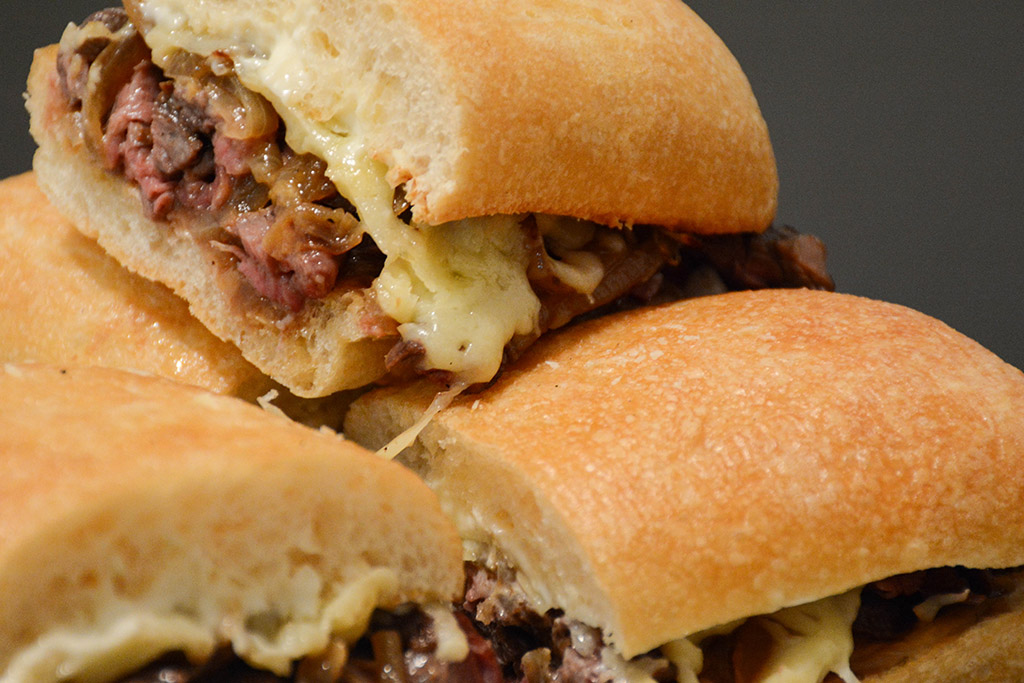 You can double up on the onions to make next time faster. They save really well in the freezer. Just transfer them to the fridge the day before making the recipe, and they’ll be perfectly thawed. This recipe makes enough to serve 4 normal or 2 extremely hungry people.

Directions: Heat 1 tablespoon oil in a large skillet over medium-high heat. Pat steak dry with paper towels and season both sides with salt and pepper. Cook steak until browned on the outside and medium rare inside, about 2 to 4 minutes per side, depending on the thickness of your steak. Remove to a plate and let rest.

Wipe skillet clean, then add remaining oil and set over medium heat. Add onions and season with salt. Cook, stirring occasionally, until softened and translucent, about 8 minutes. Reduce heat to medium-low and continue to cook, stirring often, until onions are golden and very tender, 25 to 30 minutes longer.

Add chicken stock, Worcestershire sauce, and any accumulated steak juices from the plate. Increase heat to medium-high and reduce for about 1 minute, or until onions are saucy, but not wet. Season with salt, if needed.

Preheat boiler. Meanwhile, slice sandwich rolls in half and place on a baking sheet, then thinly slice steak against the grain. Build sandwiches by spreading a generous portion of the caramelized onions on the bottom of each roll. Evenly divide steak between the roll bottoms, top with remaining onions, and sprinkle with cheese. Broil until cheese is melted and bun tops are toasted. Evenly spread mayonnaise on each bun top, close sandwiches, and slice in half. Serve at once.