So you’ve finally decided to take that big family vacation to Disney. Your kids are overjoyed, but you likely have some concerns. For one, a week at Disney World or Disneyland doesn’t come cheap. Four days at one of the parks, plus flights and lodging, could cost a family of four anywhere from $2,300 to $4,500, depending on where you’re traveling from and whether you choose to stay at a Disney hotel, an analysis by travel website Hipmunk found. With a few grand on the line, there’s a lot of pressure to make sure the vacation measures up.

Fortunately for you, Disney veterans who return to the parks time and again have figured out the secrets to making a trip to the Magic Kingdom feel like, well, magic. We’ve rounded up some of their best tips, so you can avoid critical errors that lead to a meltdown at Space Mountain. Take it from the pros: You definitely don’t want to make these 12 big Disney vacation mistakes.

1. Planning too much — or not enough

Disney vets tend to agree there’s a happy medium when it comes to planning your vacation. Completely winging it is rarely a good idea because you might end up frustrated by long lines and missed attractions. But overplanning can backfire, especially if you don’t build any wiggle room into your schedule for contingencies.

“Planning an itinerary is a big deal, even for some frequent Walt Disney World guests. Some people create binders, spreadsheets, and schedule every step of their day. People get serious and obsessive about this. We are not those people,” noted the Disney Tourist Blog. “You don’t need to plan every movement so that there’s no spontaneity in your trip, just make sure you have at least a loose plan of what you’re going to do.”

Next: Why you must understand the FastPass system

2. Not understanding the FastPass system

Did you think you could just show up at Disneyland and hop right on the Matterhorn or Space Mountain? Think again, Mouseketeer. Lines for popular rides can be hours long, which is why you need to get to know the FastPass system.

Visitors to Walt Disney World can book certain rides and character meet-and-greets up to 60 days in advance of their visit using FastPass+. The free reservations system can save you hours of waiting time, though you should try to book your spot as soon as it becomes available because popular rides will fill up quickly. The system is a slightly different at Disney parks in California. At Disneyland and California Adventure, you get your FastPasses from a kiosk in the park on the day of your visit.

Next: FastPass isn’t the only way to get on rides quicker.

Disneyland’s Grizzly River Rapids ride is one of several at a the park with a Single Rider option. | David McNew/Newsmakers

A FastPass isn’t the only way to bypass punishingly long queues for top Disney attractions. Select rides at Disney parks, such as Disneyland’s Splash Mountain, have a special “Single Rider” line. If you’re willing to fill an empty space in a car with a bunch of strangers, you might be able to get on the ride faster. This trick won’t work for parents with young kids who can’t ride alone, but for travelers who don’t mind splitting up with their group it can save a bunch of time.

Next: A time-saving trick for parents with small kids

4. Not taking advantage of Rider Switch

You and your husband are both dying to experience Space Mountain, but your 2-year-old doesn’t meet the height requirement. You might think the only way you’re both getting on the ride is for one of you to cool your heels with the munchkin while the other parent waits in a long line. Once one person finishes riding, you’ll switch off, effectively doubling your wait time.

This is a big mistake. On popular rides, such as Space Mountain and Splash Mountain, both Disneyland and Disney World have a Rider Switch option. Here’s how it works. Your entire family waits in line together. Once you get to the front of the line, one person stays behind with the non-riders. After the first group finishes their ride, they’ll watch the non-riders while the second person gets to ride, all without having to wait in a long, long line again.

Next: Enjoy your Disney visit, rain or shine.

5. Not preparing for bad weather

The folks at Disney might strive to control every aspect of your in-park experience, but even they can’t dictate the weather. Unfortunately, rain can put a damper on your best-laid plans, especially if you’re visiting Disney World in the summer or fall, which coincides with Florida’s stormy season.

Although you could get lucky and see only sunshine on your trip, it makes sense to have an inclement weather plan. That means bringing ponchos and umbrellas from home. (Buying rain gear once you’re in the park is a huge waste of money.)

You can also make a note of the indoor attractions, such as Magic Kingdom’s Hall of Presidents or Enchanted Tales with Belle, to hit when the rain’s pouring down, noted the Disney Tourist Blog. As a bonus, the parks are often less crowded when the weather’s bad, so wait times should be shorter.

Next: Check the ride refurbishment schedule before you travel to avoid disappointment.

6. Not checking the schedule

Dreaming of getting soaked on Splash Mountain during your next Disney World vacation? Don’t plan a trip for fall 2017. The popular Magic Kingdom ride will be closed for refurbishment from Aug. 28 through Nov. 17, according to TouringPlans.com. The Hall of Presidents and Liberty Square Riverboat are also on the list of attractions that will be shuttered for at least part of the year. Disney posts current closures on its website, and you can check sites, such as TouringPlans and Undercover Tourist, to get an idea of planned refurbishments during your visit.

You’ll also want to check the general park schedule before you go. Park hours can vary, as can daily events, and it helps to know what to expect before you go.

Next: Don’t underestimate how long it can take you to get around the parks.

7. Not considering how you’ll get around

Disney World is a big place, and its transportation system is more complicated than that of many cities. Between shuttle buses, the monorail, and ferry boats, figuring out how to get from point A to point B can be an adventure in itself. And with huge crowds during peak times you might find it takes much longer to reach your destination than you anticipated. To help you out, Disney Fanatic has rounded up some of the key things first-timers need to know about getting around Disney World.

Travelers to Disneyland, on the other hand, don’t need to stress so much about transport. You can easily cover the parks on foot, according to the Disney Tourist Blog. But if you drive to the park, be prepared to deal with Southern California’s notoriously nasty traffic.

8. Not personalizing your stroller

A man pushes a child in a stroller at Disneyland. | Frederic J. Brown/AFP/Getty Images

For many parents, a stroller is a must-have if you’re visiting Disney with little ones. But finding yours after you’ve parked it can be a real challenge. Whether you’re bringing your own or renting one at the park, attach something to it, such as a sign or ribbon, so you can quickly identify your wheels, Travel & Leisure advised.

You should also be careful to not leave valuables in your stroller while you’re visiting an attraction. Finally, park your stroller only in designated spots. Disney cast members will move your stroller if you park it illegally, noted the Tips from the Disney Diva blog.

Next: Don’t get stuck with a long wait for dinner.

You’re going to get hungry during your trip to the Happiest Place on Earth. Disney has you set, with plenty of places to grab a bite. But if you want to enjoy a more civilized meal or dine with Mickey at one of the restaurants with table service, you’ll need to plan ahead.

At Walt Disney World, you can make an Advance Dining Reservations six months in advance. You’ll definitely want to book early if you’re hoping to eat at a hot spot, such as the Beauty and the Beast-themed Be Our Guest restaurant. Tables at Disneyland can be reserved 60 days in advance.

“Our biggest rookie mistake was not making dining reservations for our sit-down meals. My parents and I waited almost 90 minutes for a table for lunch at Liberty Tree Tavern and again at Biergarten during our first visit,” said user Luv2Run in a discussion of first-timer mistakes on DISboards.com.

Next: Don’t think you can fool Disney about your kid’s height.

10. Thinking you can sneak your too-short kid onto a ride

Not all Disney rides are designed for small kids. | Robyn Beck/AFP/Getty Images

Disney runs a tight ship. Your kid might be almost 40 inches tall, but if she doesn’t meet the height requirement for a certain ride, she’s not getting on. That’s what Brittany Dixon, who blogs at A Healthy Side of Life, discovered during her family’s trip to Disney World.

“They measure anyone that looks even close to the height mark before you even get in line. There is no chance a child is getting on a ride they aren’t fully tall enough for,” she wrote. “Know which rides your child is tall enough ahead of time, or wait until your child is at least 40 inches when they can ride almost everything.”

Next: Make sure you plan for a little R&R. 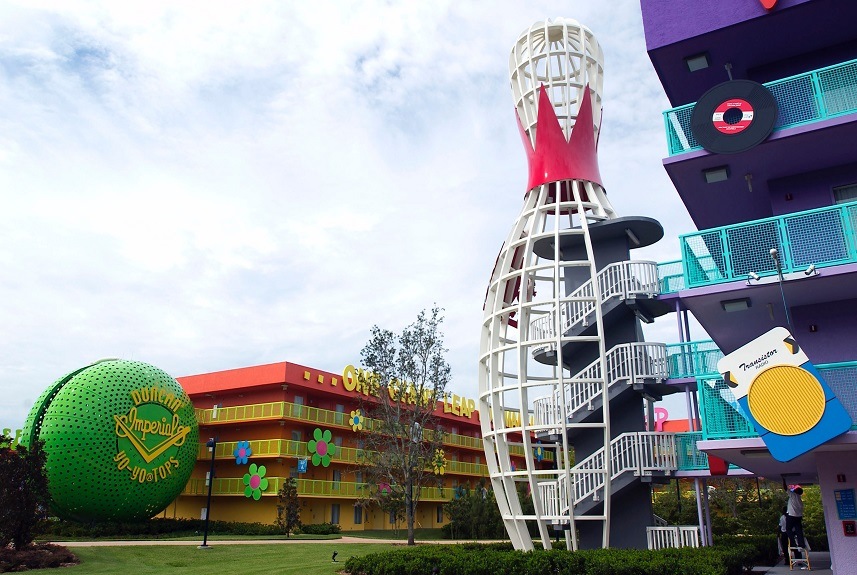 Many Disney vets suggest heading back to your hotel for a mid-afternoon break. | Matt Stroshane/Getty Images

You might only have a few days at Disney, so it’s understandable that you want to make the most of every minute. When you’ve spent hundreds of dollars on park admission and plane fares, you might be reluctant to waste time lounging by the pool or relaxing the hotel room.

But according to Disney pros, taking a break is actually a good idea. Spend the morning at a park, take a midday siesta when the heat is at its peak, and head back out in the late afternoon or evening for more fun.

“Trust me — from parent to parent, this is the best advice I can give,” wrote Carl Trent on his site, Dad’s Guide to WDW. “A nap or a swim (or both!) at the hotel are just the thing to get refreshed and recharged for more fun! Disney is tiring, and parents need a rest just as much as kids! If you can’t get back to your room (sometimes it just doesn’t work in the plan) you can find a cool place to sit down and relax.”

Next: You won’t be able to do it all.

At 43 square miles, the entire Walt Disney World resort complex is roughly the size of San Francisco. Disneyland Resort is quite a bit smaller but still plenty big. There are dozens of rides, attractions, and other things to see at both parks, and chances are you won’t be able to do it all. Do some research ahead of time, figure out your must-dos, and prepare to be flexible.

“There’s no possible way to see and do everything in one trip, so enjoy the time you have and experience what’s in reach,” advised DISBoards.com user JudieB.

Read More: 15 Family Vacations That Are Better Than Disney World