When you think of fall, what’s the first thing that pops into your mind? Leaves changing color, crisp autumn air, and an overload of your friends’ apple-picking pictures on social media? (Admit it, you’ve probably been featured in some of those photos, too.)

While apples are often associated with delicious desserts, the fruit actually packs a ton of nutritional benefits. Rebecca Lewis, RD, shares that apples have approximately 95 calories and include 14% of our daily recommended vitamin C intake. Plus they regulate our blood sugar thanks to a healthy dose of phytonutrients. As an added tip, Lewis says, “Apples are rich in antioxidants which help with our heart health — the secret behind the super antioxidant capacity of the apple is its skin — which provides 2 to 6 times the antioxidant activity of the flesh alone!” In order to reap all the benefits of apples without bringing them down with unhealthy ingredients, try some of these savory dinner recipes created by Lewis, courtesy of HelloFresh.

Freekeh, the latest and greatest supergrain, has more protein and twice as much fiber as quinoa. Plus it boasts just as much flavor as it does nutrition. The grain is fire-roasted after harvest, giving it a slightly smoky, nutty taste. This apples-and-honey inspired dish is amped up by salty Parmesan, crunchy walnuts, and everyone’s recent favorite: roasted Brussels sprouts. The recipe serves 2, and cooking time is 35 minutes.

Make the honey citronette: Halve, peel, and mince the shallot. Zest and halve the lemon. In a large bowl, whisk together the shallot, honey, lemon zest, juice of half the lemon, 1½ tablespoons olive oil, and a pinch of salt and pepper. Core and dice the apple. Toss the freekeh, shredded Brussels sprouts, Parmesan, walnuts, and apple into the citronette, and then season with salt and pepper. Plate the freekeh salad, and then top with the roasted Brussels sprouts. Enjoy! 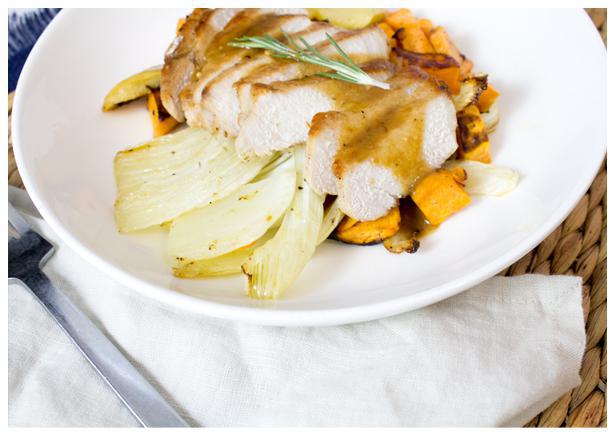 Pork with apples is always a smart pairing | HelloFresh

Try out the tastebud-pleasing powers of this sweet and savory combo. In the dish, pork chops are seared and then roasted alongside apples, fennel, and sweet potatoes. Top it off with a mustard and rosemary pan sauce, and voila! Dinner is served. Recipe serves 2, and cooking time is 30 minutes.

Directions: Preheat oven to 400 degrees. Peel the sweet potato, and cut into ½-inch cubes. Halve the fennel through the core, and thinly slice lengthwise. Halve and thinly slice the apple. Strip the leaves off of the rosemary sprig. In a large bowl, toss the sweet potato, apple, fennel, and rosemary with 1 tablespoon olive oil, and spread them out on a baking sheet. Roast for 20 minutes, tossing halfway through cooking, until the potatoes are tender.

Heat 1 teaspoon olive oil in a pan over medium heat. Season the pork chops with salt and pepper on each side. Sear the chops for 2 to 3 minutes on each side. Transfer to the baking sheet in the oven, and roast for 4 to 6 minutes or until cooked through. Set aside to rest.

In the same pan you cooked the pork chops in, add ½ cup of water and the stock concentrate. Stir in the mustard, and cook over medium heat until reduced by half. Add ½ tablespoon butter, and swirl the pan to combine. Taste, and season with salt and pepper. To finish, thinly slice the rested pork chops. Serve them over the roasted vegetables with a drizzle of sauce on top. 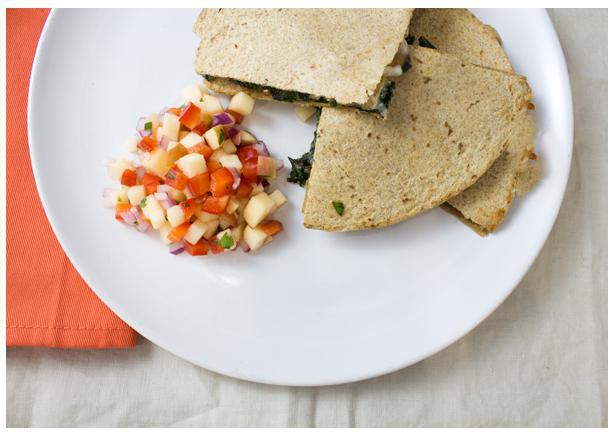 A fall twist on a classic Mexican dish, this recipe adds kale to the mix for a healthier cheesy quesadilla filling. Cool off the spicy components with yet another unique dish using your favorite fall produce: apple salsa. This recipe serves 2, and cooking time is 30 minutes.

Directions: Preheat oven to 400 degrees. Remove stems and ribs from the kale, and discard. Finely cut the kale into ribbons. Finley chop ½ cup red onion. Core, seed, and remove white veins from the bell pepper. Cut into thin strips and then cubes. Juice the lime. Slice the mushrooms. Mince the garlic. Cut the apple around the core into 4 pieces, then cut into small cubes. In a bowl, combine apple, bell pepper, lime juice, and half the chopped onion. Toss, and season with salt and pepper. Set aside in the fridge.

Heat 2 teaspoons olive oil in a non-stick pan over medium heat. Add the kale, and cook, tossing, for about 4 minutes, until wilted. Season with salt and pepper, and set aside. Remove the sausage from its casing, and add it to the same pan you cooked the kale in. Cook for about 6 minutes, breaking up the pieces, until no longer pink. Add the mushrooms, garlic, and remaining onion, and cook 5 to 7 minutes, until softened.

Place two tortillas on a lightly oiled baking sheet. Top with a sprinkle of cheese, half the kale, and sausage mixture. Top with another sprinkle of cheese and another tortilla on top. Repeat with the other tortilla. Place in the oven, and bake for 6 to 8 minutes, or until tortillas are slightly crisp and cheese has melted. To finish, cut the quesadillas into wedges, and serve with the apple.