Why Is There so Much Seaweed in Cancún Right Now? What You Need to Know About The Current Seaweed Conditions in Mexico

Now is a great time to visit Cancún and other favorite vacation spots in Mexico — that is if you can get past the seaweed infestation. In June 2018, the aftermath of Tropical Storm Alberto brought a surge in Sargassum seaweed to beach towns across the Gulf of Mexico and the Caribbean, causing tourism in some areas to plummet.

It isn’t the first time beach cities like Cancún and Riviera Maya have experienced a surge in seaweed. It’s a regular occurrence for some resort towns. However, according to BBC, some experts believe 2018 could be worse than years past. “On satellite images, the quantity that’s being picked up is greater than ever before,” Professor Hazel Oxenford, an expert in fisheries biology and management at the University of West Indies told BBC in July 2018. “Certainly we’ve had it for longer and in huge amounts. And some of the islands are getting it for the first time.” 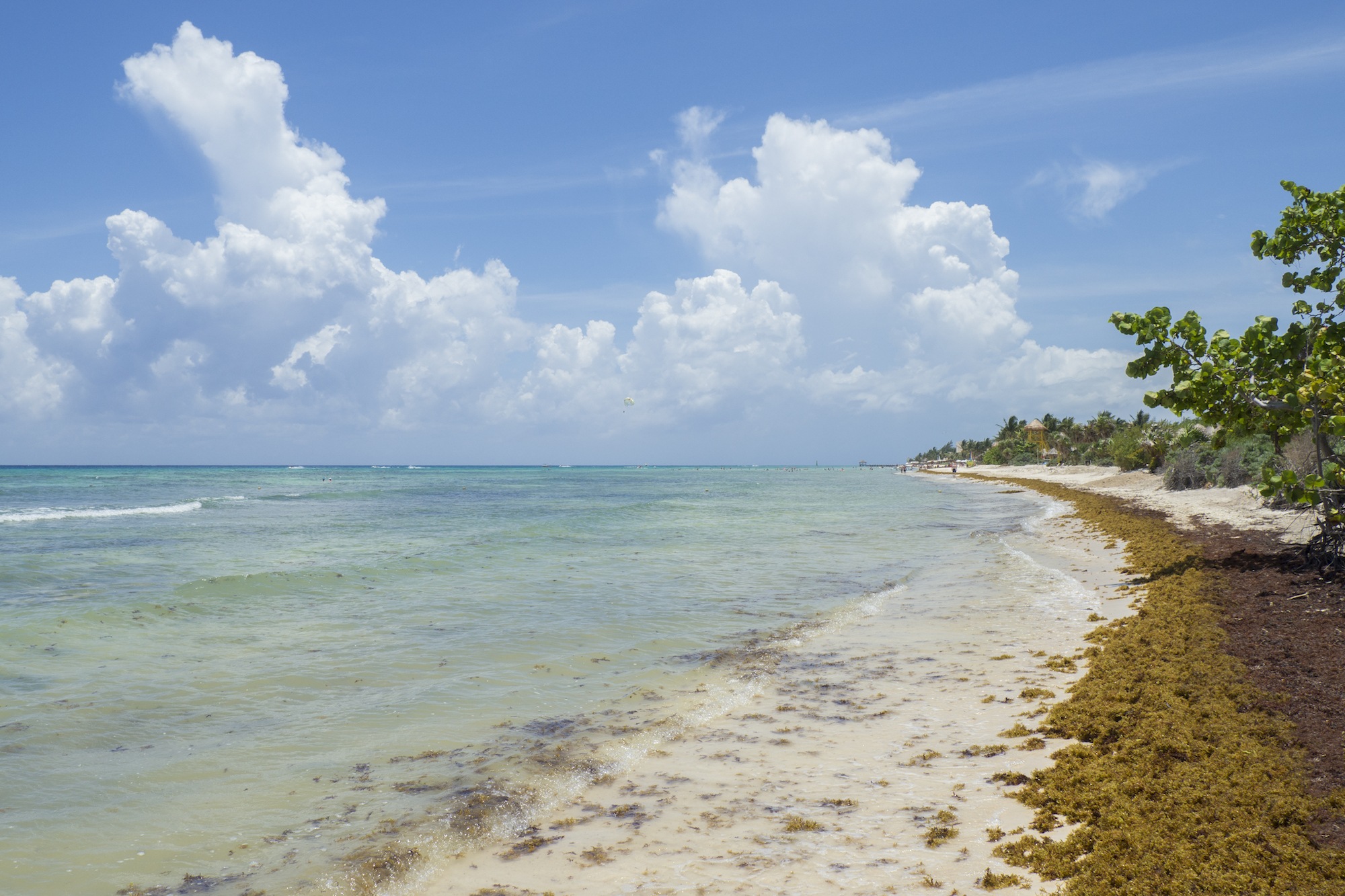 Many tourists have concerns about the current seaweed conditions in Mexico. | esp2k / iStock / Getty Images Plus

From its stench to its removal process, some could argue that Sargassum is the worst of its kind. However, it has some benefits to marine life. The seaweed species is reddish brown in color and belongs to the Fucale algae family. It often lives in shallow water and starts out in the Gulf of Mexico before currents sweep it across the North Atlantic. And while it might scare tourists off — especially when it shows up in large quantities — it can nourish beaches and bind together to create raft-like structures that double as feeding and breeding grounds for various types of marine life.

That said, once it reaches the beaches of Cancún and other destinations along the Gulf of Mexico, it starts to decompose and stink. The stench is so bad that, in some cases, it can deter tourism and cause financial loss to towns populated by tourists. In July, the Yucatan Times reported local businesses in Cancún’s Playa Gaviota Azul resort reported up to 95 percent loss in sales in just two weeks.

On top of its stench and impact on tourism, removing Sargassum is a nightmare. Removing the invasive seaweed is costly and can damage beaches.

In the case of seaweed, Cancún has received quite a lot of attention over the years. One TripAdvisor reviewer recalls a 2015 experience, stating: “The Sargassum is in the entire water column, not just on the surface.” However, another — who visited Cancún at the end of July 2018 — said “We are currently staying on the beach in Cancun and have been swimming amongst the seaweed without concern. The water is still clear blue, beautiful and warm and the seaweed has not been in the least unpleasant. Today looks as though its migration is finished. We expect clear water in the morning.”

According to several reports, Tulum is also an area of concern. On July 28th, one traveler said it “is still an issue along the beaches” and said they had to swim out “about 40 feet to get past the seaweed line.” Another shared a video of the seaweed conditions in Tulum.

Like Cancún, the Sargassum bloom in Tulum can vary, and many recommend contacting a resort regarding the current seaweed conditions in Mexico.

Riviera Maya has also seen a rise in seaweed in 2018. According to one tourist, “as of August 26, 2018, the seaweed is still piling up down in Riviera Maya. I see workers with wheel barrel after wheel barrel filled with sea weed [sic], it just keeps on coming … ”

Tourists traveling to Playa del Carmen are also met with similar issues, with some describing the situation as “pretty bad.” Another report from August 28th states, “just returned from 2 week [sic] honeymoon as sandose playacar [sic]. There was a lot of seaweed unfortunately the water was brown and murky. If you walked about 45 minutes to the right there was some clearer water.”

For current updates on seaweed conditions in Mexico — along with the Caribbean — click here.

As we previously mentioned, it won’t be the last time these popular tourist destinations see an influx of seaweed. It is important to note that most beach towns do what they can to remove as much Sargassum as possible. After an invasive Sargassum bloom in 2011, removal operations have improved and continue to get better every year.