You Should Stop Throwing Away These Useful Food Scraps

If you’re like the average American, you probably waste more food than you’d like to admit. But you can curb the waste — and get back on good terms with your budget — by rethinking some of the food scraps that you automatically throw in the garbage. Keeping them out of the trash will help you enjoy more and waste less of the food you buy at the grocery store or the farmers market each week.

Below, check out some of the food scraps that you can actually eat or put to use in your kitchen. 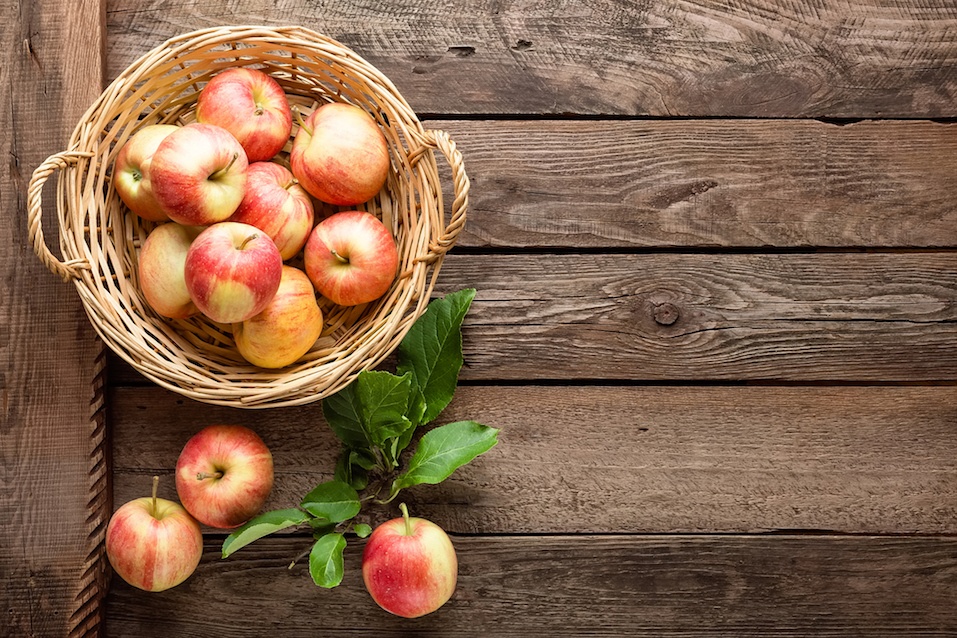 If you or your kids don’t like eating apples with the peels still on them, then you’re probably in the habit of throwing those peels in the trash. (The same goes for frequent bakers who often have to peel their apples to use in desserts.) However, The Washington Post reports that keeping the skins on not only spares you a prep step, but gives you a lot more nutrition. The Post notes that two-thirds of an apple’s fiber is found in the peel. So is most of its supply of an antioxidant called quercetin.

When you buy beets at the grocery store or the farmers market, you probably aren’t too concerned about getting a bunch with plenty of greens. However, the Washington Post recommends that you change your tune and stop throwing these greens in the trash. Beet greens give you a healthy dose of vitamin A, potassium, and important minerals. They taste great sautéed in olive oil, and you can even cook them right along with the beet roots. As the Post reports, “the sweetness of the root balances the pleasant bitterness of the leaves. It’s a pairing that is truly meant to be!”

It’s not just the beet greens that you should save from the trash can. Bon Appétit reports that you should also save the peelings and the tops. You can use them to add color to your deviled eggs. (Speaking of eggs, beet peelings and tops make a great, natural Easter egg dye as well.) Or, you can use these bright food scraps to add color to your veggie burgers, which can sometimes end up a less-than-appetizing shade of green or brown. 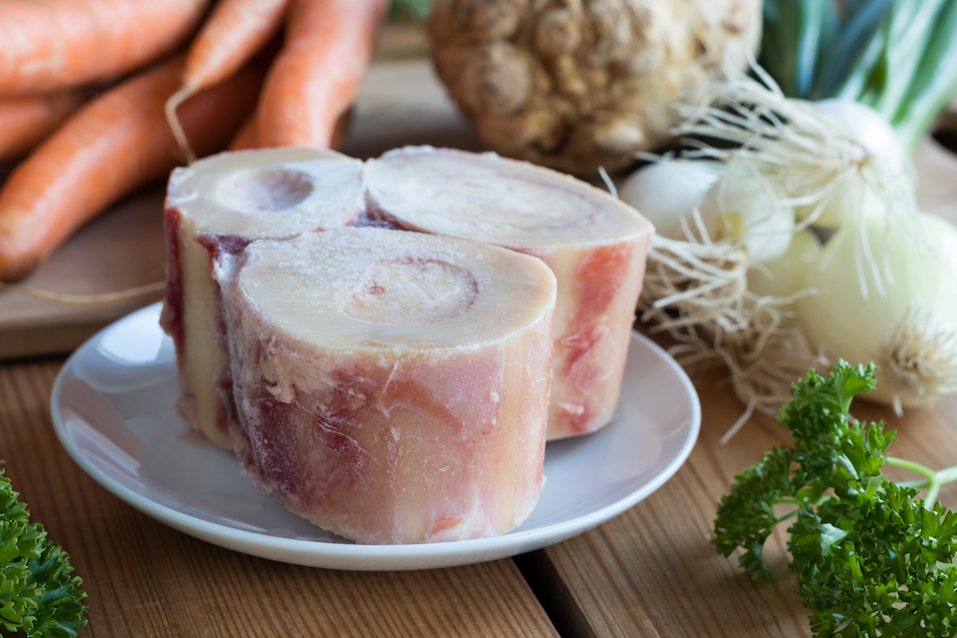 You’ve probably heard of bone broth, so it likely doesn’t surprise you to hear that you shouldn’t throw out bones and any leftover meat that’s stuck to them. Bon Appétit notes that not only do the bones add extra flavor to your stock, but the collagen in them will melt into the broth and make it gelatinous at room temperature. As the magazine reports, “As any good cook will tell you, gelatinous stocks make the best soups and sauces.” Bones from a roasted carcass will give the best flavor. So if they’re uncooked, just roast them first in the oven.

Most people just use broccoli florets and throw away the stalks. But there’s no need to throw these food scraps in the garbage. They may have a tough exterior, but the Post promises that they’re “tender and delectable” on the inside. You can use a vegetable peeler to remove that outer layer. Then, slice the stalks and prepare them right along with the florets. (Steamed, stir-fried, roasted, or however you prefer.) You can also shred them and use them raw in slaw or salad. Bon Appétit notes that they can also make a delicious puréed broccoli soup.

The Washington Post reports that many people strip off and throw away the leafy ends of their celery stalks. But you don’t have to! The leaves have even more of the characteristic celery flavor than the stalks do. They’re also rich in fiber and calcium. So instead of throwing them away, you can use them in a salad, like any other kind of green. Or you can use them to flavor a soup, just like you would with your favorite herbs. 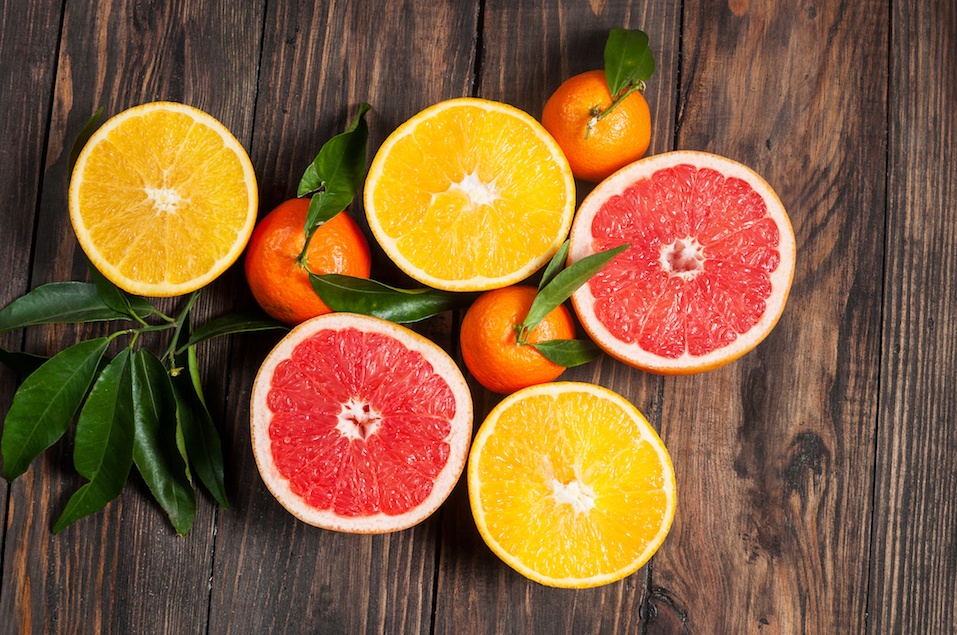 Do you frequently use lemons, limes, or oranges in recipes that call only for the juice? Then do yourself a favor and zest these citrus fruits before you juice them. The Washington Post notes that citrus zest adds a delicious citrus flavor — and a healthy dose of vitamin C — to all kinds of dishes. You can add the zest to salad dressings, marinades, and sauces. It also works well in many soups and stews. Bon Appétit recommends using citrus peels to flavor simple syrups. And if you have any extra citrus peels, you can run them through your kitchen sink’s garbage disposal to naturally deodorize your kitchen.

Use fresh ginger regularly? Then you’re probably used to throwing away the outer skin. Stop! Bon Appétit reports that you can boil these fragrant food scraps with water to make tea. (You can sweeten it to taste with honey or simple syrup.) Or, if you’re more of a craft cocktail drinker, you can also dehydrate and pulverize your ginger peelings and then use the powder to decorate the rims of cocktail glasses.

Most of the time, you use the leaves from your favorite herbs and then throw the stems away, but that’s a habit you should break. Stems from herbs such as cilantro and parsley can go into your pesto to give it extra flavor. And the stems of woodier herbs, such as rosemary and thyme, can go in your stock. You can also add them to the pot when you’re cooking grains such as rice or barley. (Just remember to remove the stems before you serve the grains.)

If you like making kale chips or salads, you probably end up throwing away the stems of this nutritious green. Fortunately, Bon Appétit has found a great use for these food scraps. The publication recommends just dicing the stems and cooking them in a skillet over medium heat. Then, Bon Appétit advises, “Add a splash of stock and chopped kale leaves to finish the dish, or just sprinkle the cooked stems over salad.” 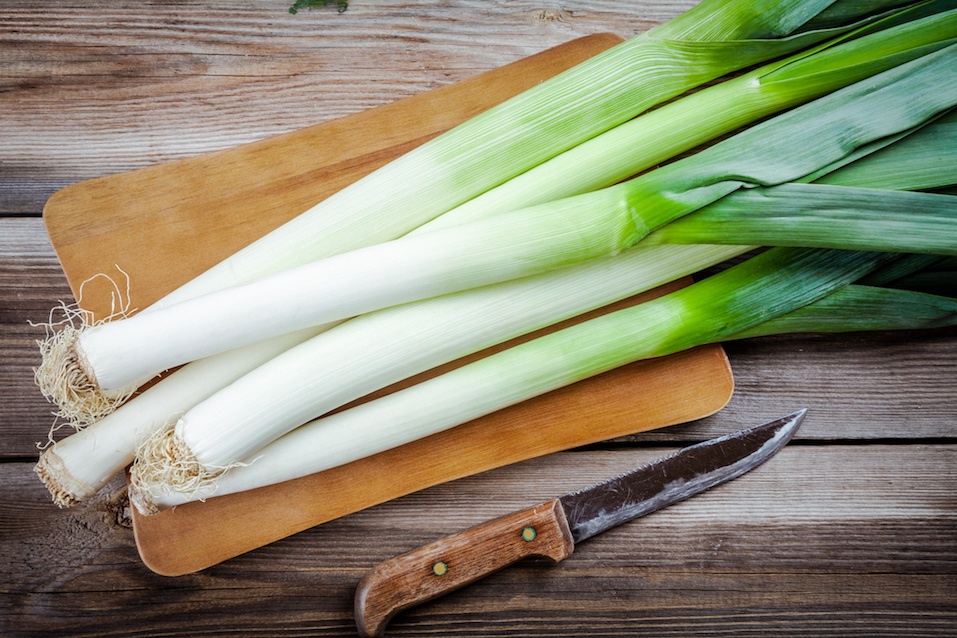 Bon Appétit reports that once they’re rinsed clean, leek greens — which many people just throw in the trash — make a flavorful addition to stock. However, they also taste great when they’re chopped finely and added to a stir-fry or a pan of sautéed vegetables. If you want to get a little more adventurous, you can also try them charred, pickled, or even cooked liked celery. 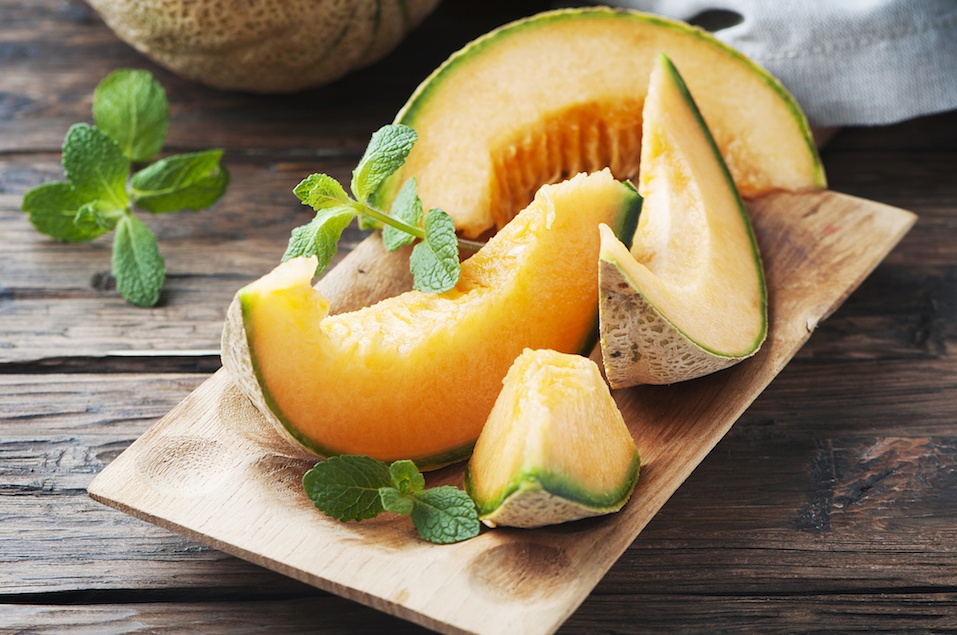 According to The Kitchn, far too many people throw out their melon rinds when they’re done enjoying these delicious summer fruits. Whether you’re partial to watermelon, cantaloupe, or honeydew, you can use the firm, white part of the melon between the flesh and the skin in a variety of ways. You can pickle it, use it instead of cucumbers in salads or gazpacho, or add it to curries.

There’s no conceivable way to use the olive pits you remove from your olives, right? Wrong. Bon Appétit recommends that instead of throwing olive pits in the trash, you save them to add to your bottle of extra virgin olive oil. The reason why? Adding the olive pits imparts an extra fruitiness to the oil, making it an even more flavorful addition to your favorite dishes.

If there’s any food scrap with no good use, most people would assume it’s an onion skin. However, Bon Appétit reports that you actually shouldn’t be so quick to throw your onion skins away. In fact, onion skins make a great addition when you’re preparing stock. As Bon Appétit explains, “Those papery peels impart a deeply golden hue to the liquid, making it look every bit as great as it tastes.” 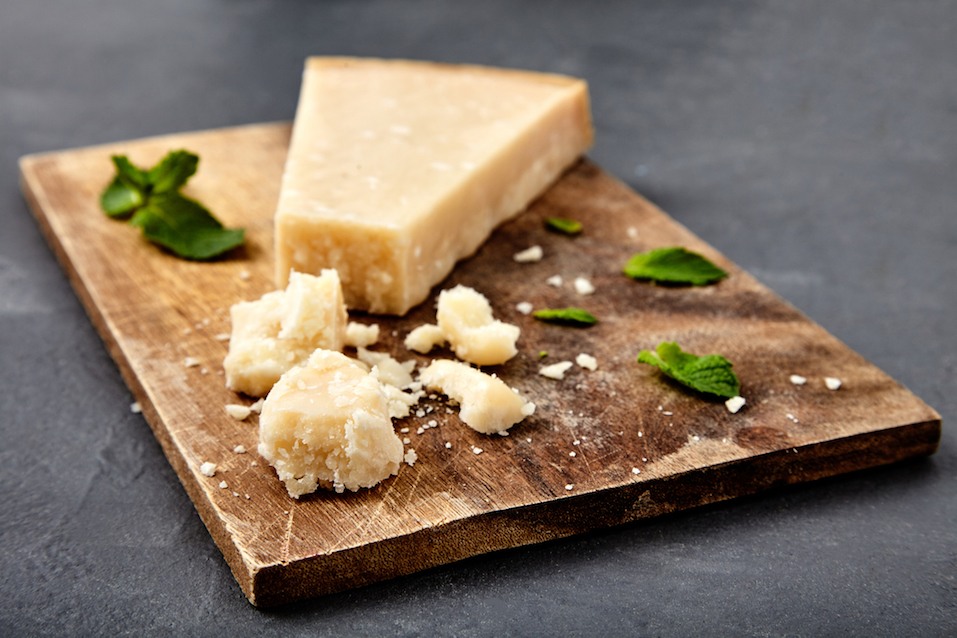 Bon Appétit begs readers to never, ever throw away parmesan rinds when they buy fresh cheese. The publication advises, you should “freeze them and make a fragrant, cheesy broth with them once you have a stash. Think cheese broth sounds weird? Not when it goes into rich and salty risottos, pasta sauces, beans, and soups. Consider this your at-home Italian cooking secret weapon.”

The Kitchn reports that you don’t need to keep throwing your potato peels in the trash. You might not want to use the skins when you make mashed potatoes or a potato salad. But if you save them to roast in the oven you’ll end up with a delicious and crispy snack that, according to the publication, “falls somewhere between potato chips and French fries.”

Whatever kind of squash you like best, you’re probably in the habit of slicing the squash and discarding the seeds. But as The Washington Post notes, everybody roasts pumpkin seeds, so why not squash seeds, too? They’re packed with magnesium, potassium, iron, and fiber. And you can easily roast them in the oven with olive oil and salt. Eat them on their own or add them to salads, soups, or any dish where you’re using squash.

If you roast tomatoes, you probably end up with a lot of juice that you don’t know how to use. (Most people just throw it in the trash.) Bon Appétit recommends that you collect this concentrated tomato juice and use it to add extra flavor to your sauces and vinaigrettes. 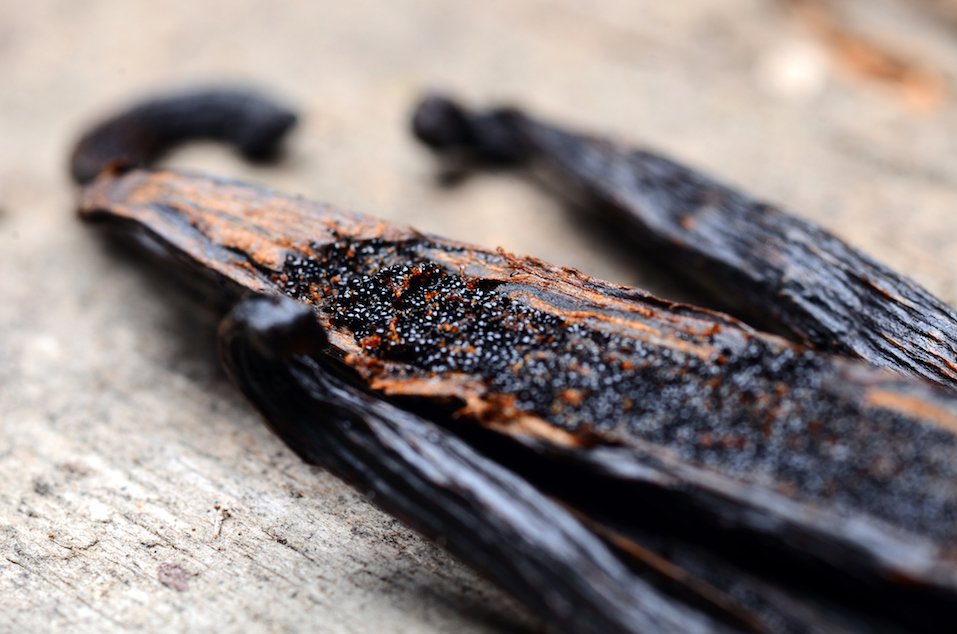 Vanilla beans are very expensive. So if you want to get your money’s worth out of the investment, stop throwing the pods in the trash after you’ve scraped out the seeds. Bon Appétit recommends rinsing the bean pods clean and then leaving them to dry. Then, tuck the pods into a small jar of sugar and seal with an airtight lid. The bean pods will infuse the sugar with a delicious vanilla flavor after a few weeks. Then, you can use the vanilla-infused sugar for baking, in coffee, or even in drinks prepared with vodka and bourbon.

Read More: Clever Ways to Use a Lemon You Never Thought of Before