Sneaky Ways Bars Save Money Without You Knowing

If you’ve ever been to a bar and paid some serious cash for drinks, you might have wondered why at some point. Bars are businesses — and it turns out they have a number of sneaky ways to save money.

Wondering how to stop wasting money at bars? Educating yourself about the tricks of the trade is the first step toward beating them. Find out how bars save money behind the scenes — and right up in your face.

That liquor may only look top shelf. | Jochen Sand/DigitalVision/Getty Images

Have you ever ordered a top-shelf liquor and watched the bartender pour it right out of the top-shelf bottle? The liquor he poured might not be what you ordered, according to Mashed.

Some shady bar owners actually fill top-shelf bottles with bottom-shelf alcohol. You order your favorite brand and get what the hoi polloi drinks. Can your taste buds tell the difference? Likely not. Do yourself a favor — if you’re ordering a mixed drink, go for “bar” alcohol; you typically won’t be able to taste the difference.

Another sleazy trick bartenders sometimes pull goes like this: You’re getting pretty loaded and the bartender knows it. Before you call your Uber you order one more drink — you’ve been drinking Belvedere and tonic all night — and he switches you from Belvedere to Smirnoff, knowing you probably won’t taste the difference at this point.

Who wants to watch a bartender like a hawk and worry about what you’re drinking versus what you ordered? Avoid all the hassles and order a bottle of beer.

Next: Does your wine taste a little funky?

2. Your glass of wine could be off

These days, lots of restaurants offer a wide array of wines by the glass. Hmmm … how does that work with opening all those bottles and keeping them from turning? Sometimes it doesn’t work. But bars can save a ton of money by hanging on to bottles for as long as possible — and then some, according to Mashed.

If you’ve ever ordered wine that’s not a popular choice from the “by the glass” list and it tasted funky, it was probably old. Who knows how old, too: Someone could have opened the bottle that night or that month. With bartenders changing shifts, it’s almost impossible to keep track of what’s old and what’s not.

Work around getting old wine easily: Just ask your server. Lots of restaurants begin evening service with new bottles of vino, so it’s worth a query. And if you get a glass that doesn’t taste right, let your server know and he’ll replace it with something else.

Next: That bar probably won’t pass a white glove test.

There’s a good chance those taps have never been cleaned. | Nisimo/iStock/Getty Images

Everyone has sat at a bar and noticed a strange smell at some point. Could be the girl’s awful perfume five seats down or could be a grungy, unclean bar smell. Chances are, it’s the latter, according to Market Watch.

Headline news: Bars are not the cleanest establishments. Maybe the staff closed late the night before and skipped tidying up a few areas before they left.

Or, perhaps the owner isn’t paying to have the place properly deep cleaned on a regular basis — that’s a great money saving technique. After all, who will notice in a dimly lit bar?

More than 125,000 people visit the hospital each year in the U.S. thanks to a foodborne illness, according to the government. Bars are hotspots for germs: Customers usually have access to the garnishes, which means you could get all kinds of germs on your lime piece; bartenders use the same cutting board over and over without washing it; and barbacks often don’t clean glasses well enough.

The alcohol you’re drinking might kill some of that, but not all. If you walk into a bar and it’s downright dirty, find another place.

Next: Don’t get shortchanged.

4. Your bartender takes shortcuts with cocktails

Make sure that pricey cocktail is worth it. | Wavebreakmedia/iStock/Getty Images

When did a cocktail become a $15 to $20 thing? Absurd. But still, it’s happening because many bar owners will charge whatever the market will bear. You’d figure you’d get a doozy of a cocktail for that price, yes? Maybe not, according to Market Watch.

Although some bars are charging crazy prices for cocktails these days, they’re often taking shortcuts with them. For instance, let’s say you order a $14 greyhound — you’d expect the bartender to use fresh grapefruit juice, right? Again, maybe not. Bars can cut corners by using bottles juices — and mixes — for lots of specialty drinks.

Next: What? No snacks?

5. There are no snacks on the horizon

A bar owner who saves money by not putting out salty snacks for customers is shooting himself in the foot. Salty peanuts and pretzels can work up a thirst, which means another drink. Cheaping out in the short term does not help in the long haul, according to Mashed.

If a bar doesn’t serve food and people are getting hungry while they’re drinking, they’ll leave to go eat. But if a bar serves snacks, customers will likely stay and have a couple more. The snacks don’t have to be complicated — or expensive. They just need to keep people in their seats and ordering drinks.

Next: Did you order a beer or a glass of foam?

6. Your beer is too foamy

Too much foam means you’re not getting all the beer you paid for. | iStock.com

An American pint of beer holds 16 fluid ounces. That number goes way down when most of the beer is foam, according to Mashed.

When you get a beer at a bar and there’s a solid head of foam on it, the bar owner either instructed the bartenders to pour beer that way or the bartender wants to get back to watching the game and doesn’t have time to do it right. Either way, you lose. It might be embarrassing to ask the bartender to fill your glass up, but you paid for it so you should get it.

Next: Prepare to be parched.

7. The bartender doesn’t offer you water 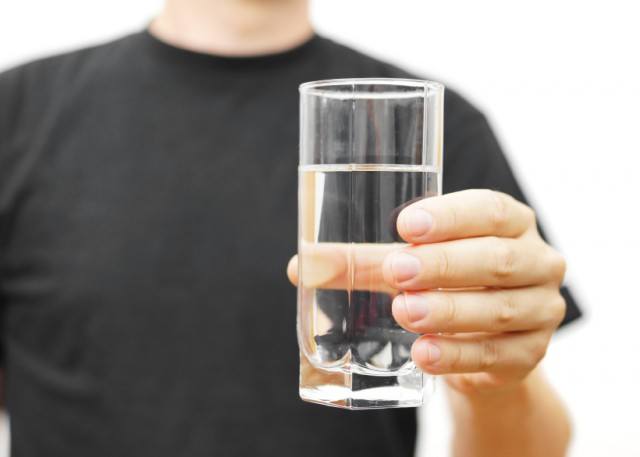 Drinking enough water will help you feel better in the morning. | iStock.com

Mashed contends bartenders know that if they don’t offer you water and you forget to order it, chances are you’ll drink more alcohol — because you’re thirsty. That one reason you might not get a glass of water with your drink. Or, the bar owner is so cheap he’s trying to save money by cutting costs on cleaning more glassware.

Drinking alcohol without water is no bueno. If you drink a glass of water after each cocktail you’ll feel better in the morning — and use the bathroom more frequently when you’re at the bar. If he or she doesn’t offer it, ask your bartender for water.

Next: Is your alcohol impaired?

Those bottles may be partially water. | Mandel Ngan/AFP/Getty Images

Yes, some bar owners really do dilute their bottles of alcohol with water, according to ABC News. The magic number an owner typically replaces with water is approximately 10% of the bottle’s volume, which saves a bar a boatload of money in the long run and which most people don’t even notice. Unfortunately, there’s not a lot you can do about this one.

Next: Bartender trick of the trade

9. Watch out for the rim dip

This is a sneaky trick bartenders sometimes use. | Santypan/iStock/Getty Images

This sounds like something out of a film noir movie, but bartenders have a couple of tricks up their sleeves when it comes to making patrons think they’re getting a great pour.

The bartender will dip your glass rim into whatever you’re drinking — this way, the first thing you smell and taste is … alcohol.

Another hack bartenders employ is filling your straw with whatever alcohol you’re drinking before they put it in your drink. Your first sip will wow you, but the rest of the drink might be watered down.

10. You see more ice than booze in your drink

Make sure you’re not paying for a bunch of ice. | Dianefotofoto/Getty Images

Bartenders can ice down drinks like nobody’s business, according to Thrillist. When you get a cocktail and it’s full of ice it might look like you got a lot of drink. But actually, the ice is taking up all that room, not the cocktail. Clearly, doing this can save bar owners tons of dough.

When you order a drink, ask for “light ice.” You might get a dirty look but you’ll get a better drink.

Next: Miserly on mixers

11. The bartender is chintzy with mixers

Although it might sound silly, bar owners can save money by having the bartenders skimp on mixers, according to Thrillist. A customer will complain if he or she gets a weak drink, but who would return a strong rum and coke? Bartenders add more ice and less mixer to drinks to save money. You’ll finish your drink faster this way — and order more.

Next: Tiny garnishes for the win

12. Your drink is sporting a miniature garnish

Some bars cut back on the garnishes. | iStock.com/Bhofack2

Heck yeah, a bar can save money when it cuts down on garnishes, according to Mashed. Fruit and olives and fresh herbs, oh my — that’s all expensive.

Bar owners looking to cut down on expenses often target the garnishes, believe it or not. If you get a drink with a teeny tiny garnish you’re likely in a bar that’s cutting corners. If you like lemon or lime in your drink, cover yourself and ask for a few pieces.

Next: Shaken, not stirred

13. The bartender shakes your drink to death

When you shake a drink to within an inch of its life its volume increases, according to Serious Eats. As you shake a cocktail, the ice in the shaker melts, which means it makes more liquid. That’s a simple, clever way for a bar to save money — and it’s virtually undetectable.

If you don’t want more of your drink to consist of ice, consider ordering a shot. Or anything else the bartender doesn’t have to shake.

Next: Pouring short saves on cash.

Perhaps the easiest way to increase overall bar profitability is for a bar owner to tell bartenders to short pour customers. It’s easy to short pour over crushed ice because it takes up so much room in the glass and needs only a little bit of liquid to fill it up.

Some bartenders even employ the “long pour” — they hold the bottle a foot above your glass and pour, according to ABC News. You’re not getting more alcohol in your booze, you’re getting a little show.

Just because a cocktail looks strong doesn’t mean it is. | TGI Friday’s via Facebook

When a bartender holds the bottle over your glass for a long time, he is obviously giving you something extra, right? Not necessarily, according to ABC News.

One thing some bartenders do when they pour is hold their finger over the bottle spout, significantly reducing the amount that comes out. Bartenders who do this will typically add the mixer to the glass quickly — so you don’t see how much alcohol is in glass — and serve it up. If the bartender puts a little alcohol on the straw you’ll think he poured you a hella strong drink.

Read more: 15 Drinks That Are a Waste of Your Money at the Bar