Tempted to pitch that slightly stale baguette? Don’t toss it in the trash can just yet. Past-its-prime bread still has life in it. From soups to stuffing, here are seven stale bread recipes that will turn a day-old loaf into a delicious new dish. 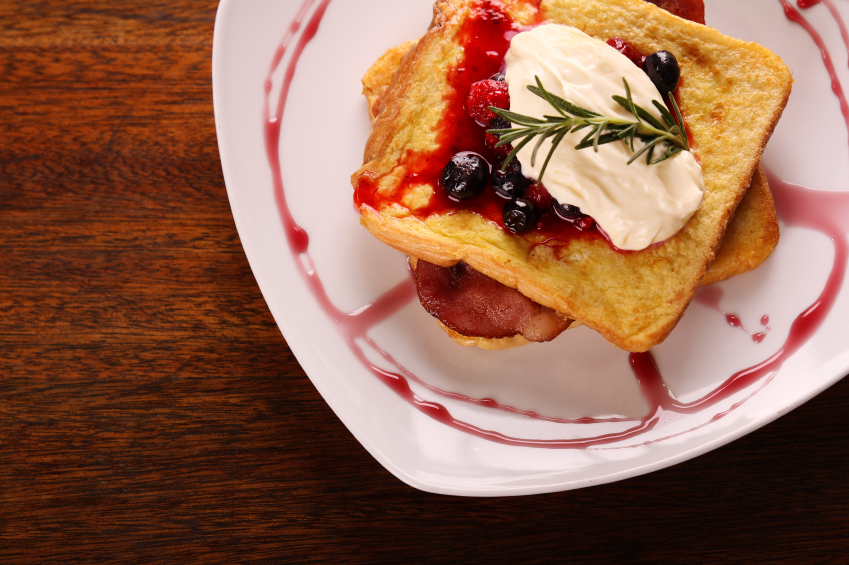 Stale bread is your secret weapon when making French toast. Using fresh bread in this classic brunch dish results in a soggy mess, but dried out slices will absorb the custard without falling apart. This recipe from Epicurious is made with leftover challah bread (but can also be prepared with brioche) and is served with a homemade berry sauce.

Whisk together eggs, milk, sugar, and salt until blended. Pour into a large baking pan and soak bread slices in 1 layer, turning once, 8 minutes.

As the bread soaks, prepare berry sauce. Purée 1½ cups berries with sugar and lemon juice in a blender. If you want to eliminate seeds, force purée through a very fine sieve into a bowl. Transfer to a serving bowl and fold in remaining berries.

Cook the French toast. Heat 1½ tablespoons butter in a 12-inch heavy skillet or griddle over moderately high heat until foam subsides. Transfer 4 soaked bread slices to skillet with a slotted spatula and cook until golden brown, about 1 minute on each side. Cook remaining bread in two batches, adding more butter as needed. Transfer slices as cooked to a large shallow baking pan (using a clean spatula) and, when all are browned, bake in middle of oven until hot, about 5 minutes. 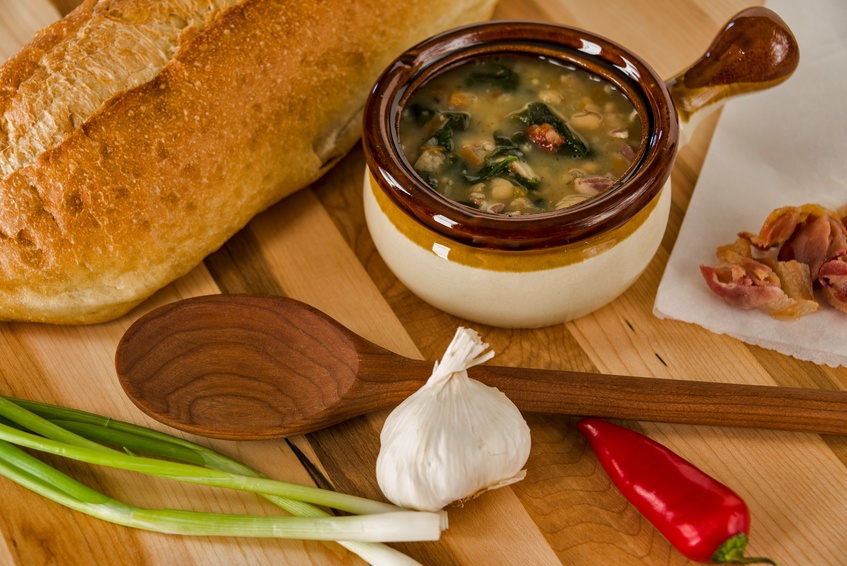 Ribolitta is a Tuscan soup made with bread and vegetables. The dish is an invention of Italian cooks who used stale loaves to make a leftover soup last a bit longer. This version is from Eataly and also includes tasty, healthy ingredients like kale, cabbage, and zucchini. Serves 8.

Add the tomatoes and their juice, squeezing the tomatoes between your fingers to break them up. Add 2 quarts of water, the bay leaf, thyme, and all of the beans. Season to taste with salt.

Bring to a boil, and then reduce the heat to a simmer. Cook until the vegetables are very tender, about 30 minutes. Remove and discard the bay leaf.

Add the bread cubes to the soup, and simmer until the bread is breaking apart and the soup is very thick, about 10 minutes. Let the soup rest off the heat for several minutes, and then ladle into warmed bowls. Drizzle a generous amount of extra virgin olive oil over each portion before serving. 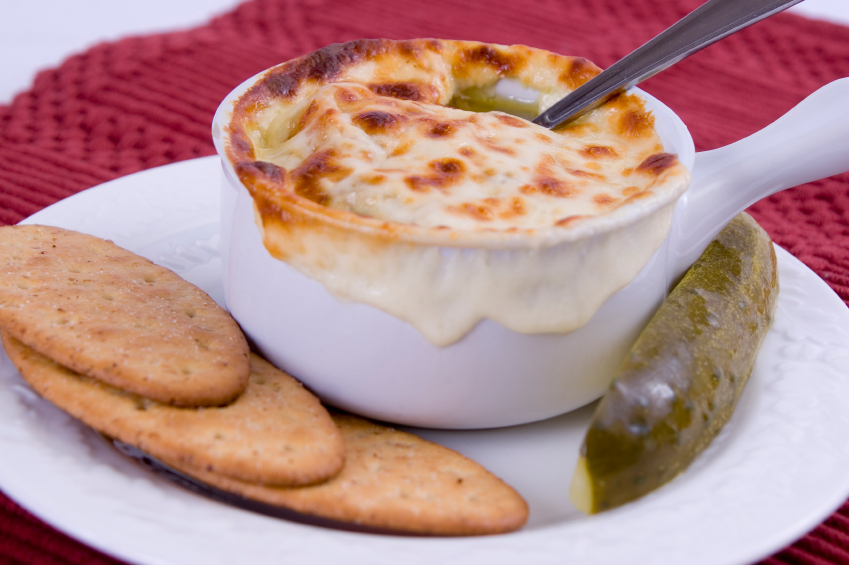 Day-old baguette is transformed into croutons that top a bowl of savory French onion soup. Then, the bread is covered with Comté or Gruyère cheese and cooked under the broiler for a perfect simple dish. This recipe from NPR makes 4 to 5 servings.

Remove pot from oven. Stir onions and any collected browned bits on sides and bottom of pot. Partially cover and return to oven. Cook until onions are soft and golden brown, about 2 hours, checking and stirring up browned bits after 1 hour.

After 2 hours, remove pot from oven and transfer to stovetop. Simmer, uncovered, over medium heat until liquid evaporates and onions turn brown, stirring and scraping up any browned bits on bottom and sides of pot, about 20 minutes.

Continue cooking to allow a crust to form on the bottom of the pan without burning, about 5 minutes. Add ¼ cup white wine to deglaze pan and loosen crust. Continue cooking until wine evaporates and another crust begins to form. Deglaze a second time with remaining ¼ cup wine. The onions should be dark brown at this point.

Add sherry or Calvados and cook, stirring until alcohol evaporates. Add stock, thyme and bay leaf. Stir and scrape up any browned bits on bottom and sides of pot. Bring to a boil, reduce heat and simmer, covered, 30 minutes. Discard thyme and bay leaf. Season with salt and pepper to taste.

While the soup simmers, make the croutons. Lightly brush bread slices with olive oil. Place on a baking sheet and bake in 400-degree oven until light golden and crisp, 5 to 8 minutes. Remove and set aside.

Divide soup evenly among 4 to 5 ovenproof bowls or crocks arranged on a baking sheet. Gently lay croutons in one layer to cover most of the surface of the soup. Sprinkle cheese evenly over croutons. Place baking sheet in oven under broiler. Broil until cheese is bubbling and golden brown, 2 to 3 minutes. Remove from oven and serve immediately. 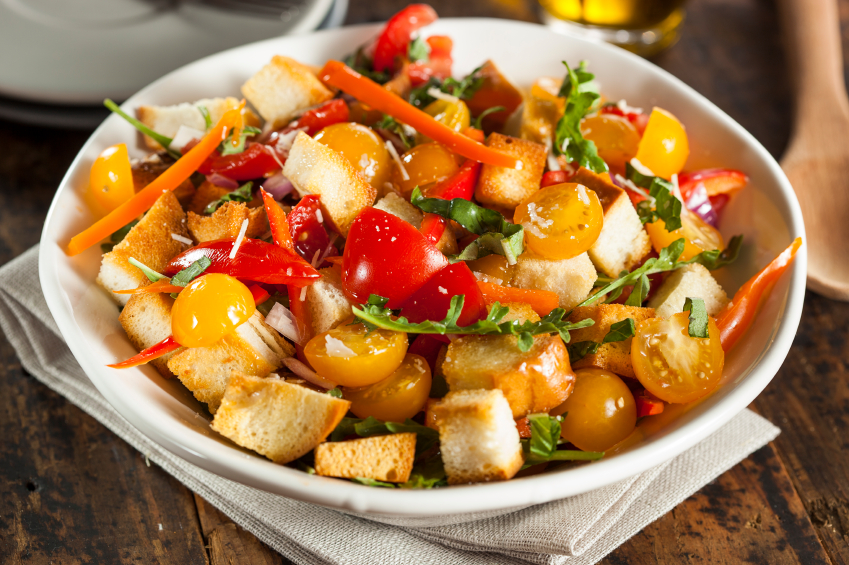 Who says a salad can’t involve carbs? Panzanella, or bread salad, usually involves tossing together crusty, leftover bread and garden-fresh tomatoes for a light and simple salad. In this version the tomatoes along with other fresh veggies like bell pepper and zucchini are grilled, resulting in a heartier final dish. Recipe from Joyful Healthy Eats.

Place the peppers, squash, zucchini, and red onion in a single layer on the grill and grill for 3 to 4 minutes per side. The peppers should be grilled whole.

Place the cherry tomatoes in a grill basket. Grill for 3 minutes.

Transfer the cooked vegetables to a large bowl and set aside to cool. Once cool, roughly chop the vegetables and return to the bowl.

Brush the ciabatta bread with canola oil. Place the bread on the inside part of the grill and cook for 2 to 3 minutes, until lightly charred.

Remove bread from grill. Cut into 1-inch cubes and set aside.

Add the bread to the bowl with the vegetables. Drizzle with dressing. Sprinkle on the chopped basil. Toss and serve. 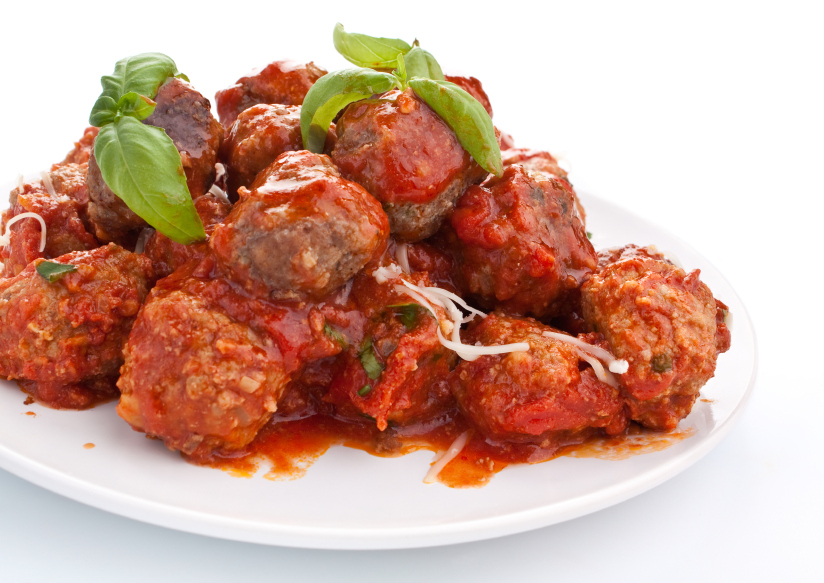 Italian grandmas use panade, or bread softened in milk, when making their meatballs. The extra ingredient not only results in a tender, juicy meatball but is also a way for budget-conscious cooks to make expensive cuts of meat stretch a bit further. You can use any kind of hearty white bread in this recipe from Lucky Peach, which yields 24 meatballs.

Directions: Heat the oven to 300 degrees Fahrenheit. Heat a sauté pan over medium heat, and add the olive oil. After a minute, sweat the garlic until aromatic and almost softened, around 1 minute. Add the parsley, onions, and a large pinch of salt. Stir well, and cook until soft, about 10 minutes. Reserve.

Make the panade: Combine the bread and milk in a large bowl and toss. When the bread is completely saturated and softened, mush it together with your hands. Set aside.

Heat a wide skillet over high heat. Coat the bottom of the pan with the neutral oil, and heat until shimmering. Working in batches, sear the meatballs until deeply brown on all sides, around 3 to 5 minutes per side, making sure not to crowd the pan. Reserve the browned meatballs in a roasting pan.

Top the meatballs with the tomato sauce and slide the pan in the oven. Bake for 30 minutes, until the meatballs are just cooked through. Reserve, warm, until ready to serve. Serve meatballs 3 to a plate, garnished with a large spoonful of sauce, a drizzle of oil, and an additional sprinkling of cheese. 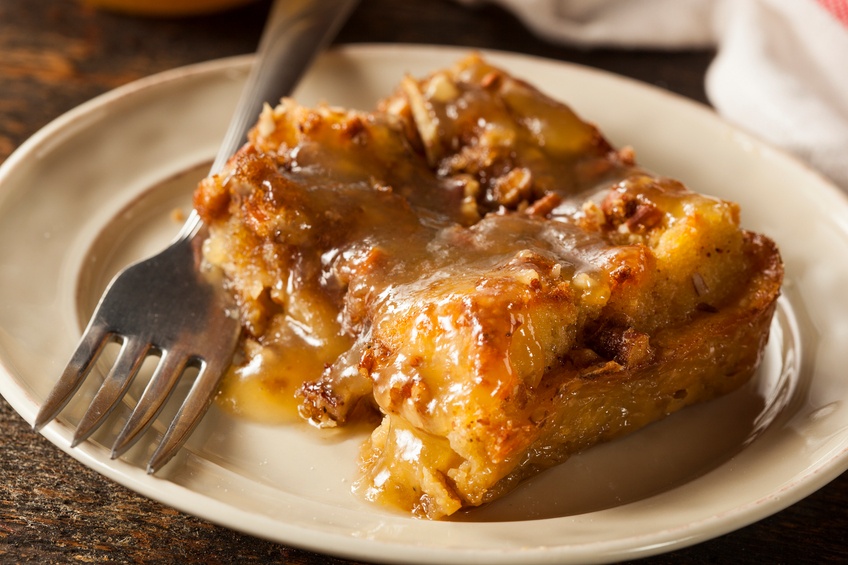 Don’t let that loaf of rich, buttery brioche go to waste. Instead, turn it into a delicious dessert. In this recipe from the Food Network’s Patrick and Gina Neely, the bread is soaked in bourbon-infused custard, topped with pecans, and served with fresh whipped cream for a perfect sweet treat. Serves 10.

Directions: Butter a 13-by-9-inch baking dish, and put the cubed brioche in it. Sprinkle with the pecans.

Pour the custard mixture over the bread in the baking dish, giving the bread a stir to make sure it’s coated. Let the pudding sit for 1 hour, so the bread can fully absorb the milk.

Preheat the oven to 350 degrees Fahrenheit. Once it is ready, put the dish in the oven and bake for 50 minutes, or until puffy and set. Remove, and let stand 10 minutes before serving. Serve with some fresh whipped cream. 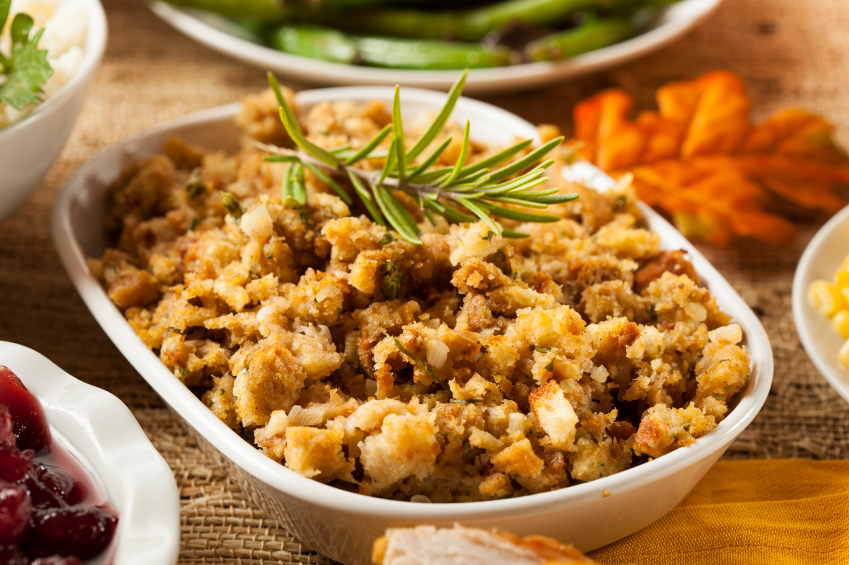 Stuffing is a Thanksgiving dinner staple, but there’s no reason you can’t make this classic side dish at other times of the year. This version from Bon Appétit is made with porcini, shiitake, and button mushrooms and would make the perfect accompaniment to roast chicken or pork chops.

Mix bread into mushroom mixture. Season with salt and pepper; mix in egg.