The Best Aphrodisiac Foods to Spice Up Your Valentine’s Day

If you’re looking to spice things up for Valentine’s Day, you should be paying special attention to what’s on the menu for dinner. Read on to find out what the French would eat three servings of before their wedding night. And learn what an Aztec emperor would consume 50 cups of each day to please his many wives.

This natural sweetener can affect your hormone levels. | iStock.com

People have considered honey an aphrodisiac for centuries. The word “honeymoon” even stems from the sticky substance’s sexual enhancement. According to PBS, “Hippocrates prescribed honey for sexual vigor. According to an old French wives’ tale, a bee sting was supposedly like being given a shot of pure aphrodisiac.” How exactly does honey make people feel a certain kind of way? It contains boron, which affects your hormone levels, and nitric oxide, which is released in your blood during arousal.

Try some avocado on your toast. | Locknloadlabrador/iStock/Getty Images

The Aztecs believed in the aphrodisiac powers of the avocado (they called it “ahucatl,” which also means testicle) so adamantly that when they were being harvested, virginal women were not allowed to leave their homes, according to PBS. Barbara Klein, professor of food and nutrition at the University of Illinois, says the fruit earned its reputation as an aphrodisiac due to its high levels of vitamin E, which gifts us with youthful vigor and high energy.

Next: Casanova was onto something with this food. 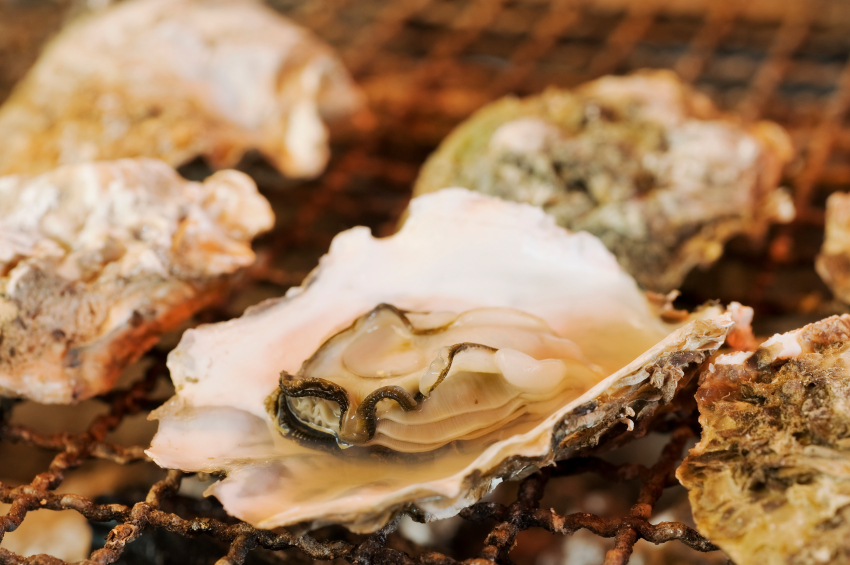 Oysters are one of the most notorious of aphrodisiacs, made famous by the 18th century lover. Giacomo Girolamo Casanova supposedly consumed 50 oysters for breakfast to help him with the ladies. And today, scientists have confirmed the Italian adventurer’s practice. However, “The scientists stressed that the oysters have to be eaten raw to be most effective. Cooking them reduces the quantity of D-Asp and NDMA molecules,” says The Telegraph.

Next: Legend has it Aphrodite planted the first tree of this fruit.

It’s a symbol of fertility. | iStock.com

The word aphrodisiac originates from the name of the Greek goddess of love, Aphrodite. Aphrodite is said to have planted the first pomegranate tree, so you can imagine just how effective this fruit is at getting people in the mood. For years, the pomegranate has been a symbol of fertility (thanks to its seed-filled center) and sensuality.

Next: This food increases libido by canceling out excess ammonia.

According to PBS, the French once ate three meals of asparagus the day before their weddings to increase libido. The aspartic acid in asparagus helps to cancel out any excess ammonia we have in our bodies, which can cause fatigue and sexual disinterest. Besides being an aphrodisiac, this vegetable is also full of calcium, vitamin E, and potassium.

Next: It’s not a sexy meal without dipping this fruit in chocolate.

These are a Valentine’s Day staple for a reason. | iStock.com

Besides being a natural aphrodisiac, strawberries simply make for a sexy snack or dessert all on their own. In the shape of a plump, red heart, they’re perfect for dipping in chocolate after a romantic meal. According to Eat Something Sexy, strawberries promote blood flow (important, obviously, for sexual arousal), and they produce extra helpings of estrogen. Additionally, they contain magnesium, potassium, and folate, minerals that aid in promoting a healthy sex drive.

Next: An intimate vegetable to eat with a partner

When you think about the act of eating an artichoke, it’s a pretty intimate experience to practice with a partner. The two of you are pulling off leaves one by one, using your tongue and teeth to harvest the meat of the vegetable, all to get to the heart at the center. Perhaps not the best appetizer to split with an acquaintance! Reader’s Digest says this vegetable earns its aphrodisiac statues because it’s packed with vitamins and antioxidants, which enhance blood flow and proper body function.

Next: The Mayans used to trade this food for a night in a brothel.

Indulge in some chocolate. | Viennetta/iStock/Getty Images

Last but certainly not least, we have the quintessential sexy food: chocolate. Chocolate’s history as an aphrodisiac dates back to the Mayans. They used to trade a few cacao beans as an entrance fee to spend the night in a brothel, according to PBS. Additionally, the Aztec emperor Montezuma used to consume 50 cups of chocolate a day to be able to satisfy his many wives. The rest is history.

Why is chocolate so sexy? Scientists say it’s due to the candy’s phenethylamine (a stimulant released when we fall in love) and tryptophan (which produces serotonin).