The Best Bagels in America Are Found in These States

Many people will agree, not much compares to a crusty yet chewy bagel, fresh out of the oven. Bagel shops across the country strive to get it just right, many of them copying the world-famous, mouthwatering New York city recipes and preparation methods. If you’re lucky enough to live near a good bagel shop, you surely know to get there early or else risk your favorite flavor being sold out for the day. In some parts of the country, however, finding the best bagels around can be quite the challenge.

Here we’ve listed the 15 states with the best bagels – and the shops where the bagels are not to be missed. You might not want to read this on an empty stomach. Then again, if you need an excuse to go out and get your daily bagel, this is it. 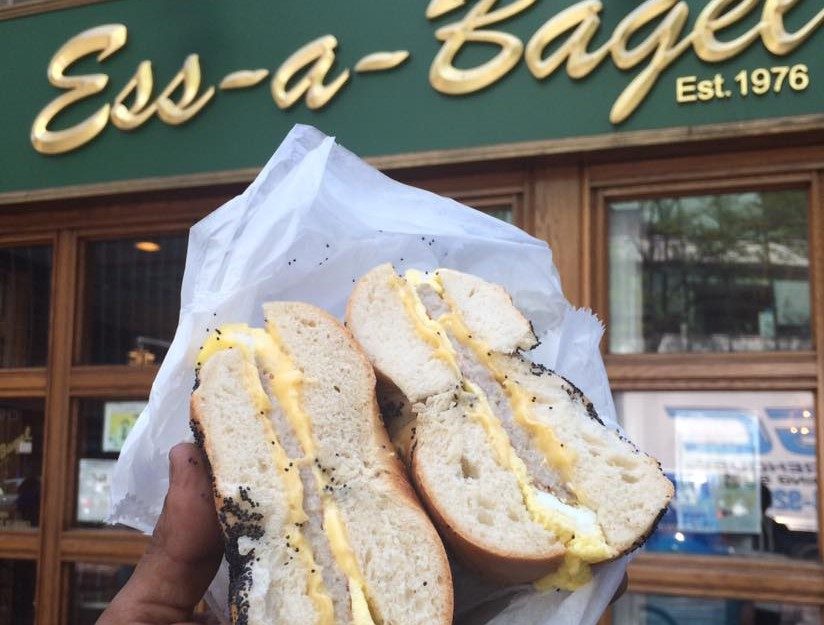 New York is the king of all bagel cities. | Ess-a-Bagel via Facebook

It’s pretty indisputable that New York City is king of the bagel scene. The city’s bagels are often copied throughout the country with varying levels of success. Dozens of shops throughout the city bake up hand-rolled bagels filled with malty sweetness. Does it sound like an art form to you? Yep, we agree.

One 40-year-old Newurr York City standby is Ess-a-Bagel, which conveniently operates two shops in the city. Ess-a-Bagel is well-known for its crunchy yet chewy, larger-than-life creations. With 14 bagel flavors and almost 30 spreads to choose from, let’s just say you’ve got options. Deciding which to order might just be the hardest part.

Next: A state where snowbirds know their bagels 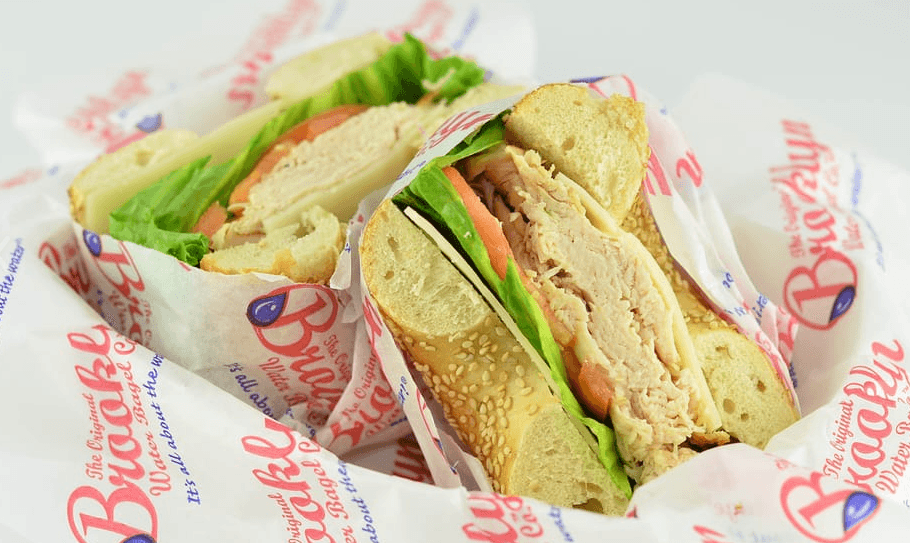 The water is the key to these New York style bagels. | Brooklyn Water Bagel via Facebook

With so many snowbirds from the northeast (and New York in particular), Florida residents surely know what a good bagel should taste like. That’s what makes one particular mini-chain so popular. The Original Brooklyn Water Bagel Co., based in Delray Beach, claims its bagels are so good because they are made in-house with water that replicates Brooklyn water. “It’s all about the water!” is the company slogan.

Next: The best bagel outside New York? 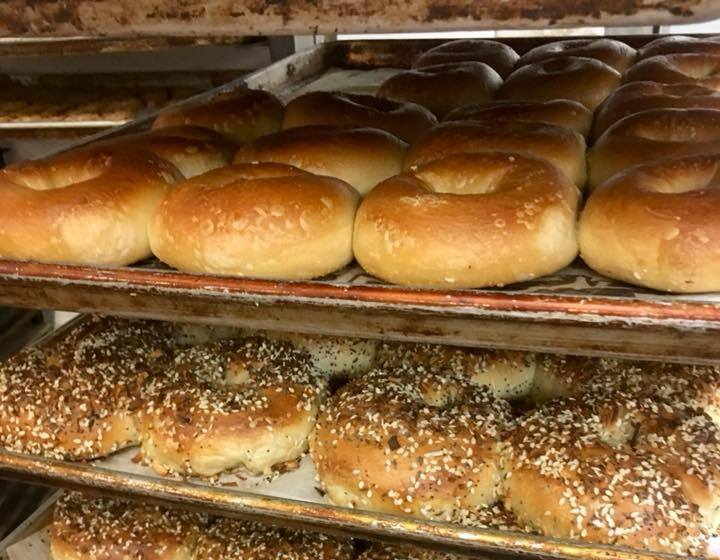 Kaufman’s has been making delicious bagels for over five decades. | Kaufman’s Deli Bagels via Facebook

Our next stop on the best bagel tour is the Midwest — the Chicago suburbs in particular. Kaufman’s Delicatessen in Skokie, Illinois, has been a landmark for more than five decades. The shop features a bakery specializing in Eastern European breads. Every product, including what Kaufman’s boasts is “the best bagel outside New York,” is made onsite. The bagels have been described as chewy and just dense enough. In addition to the bagels, when you’re there don’t forget to order up some of their homemade pastrami and corned beef.

Next: Some actually say these bagels beat out New York’s. 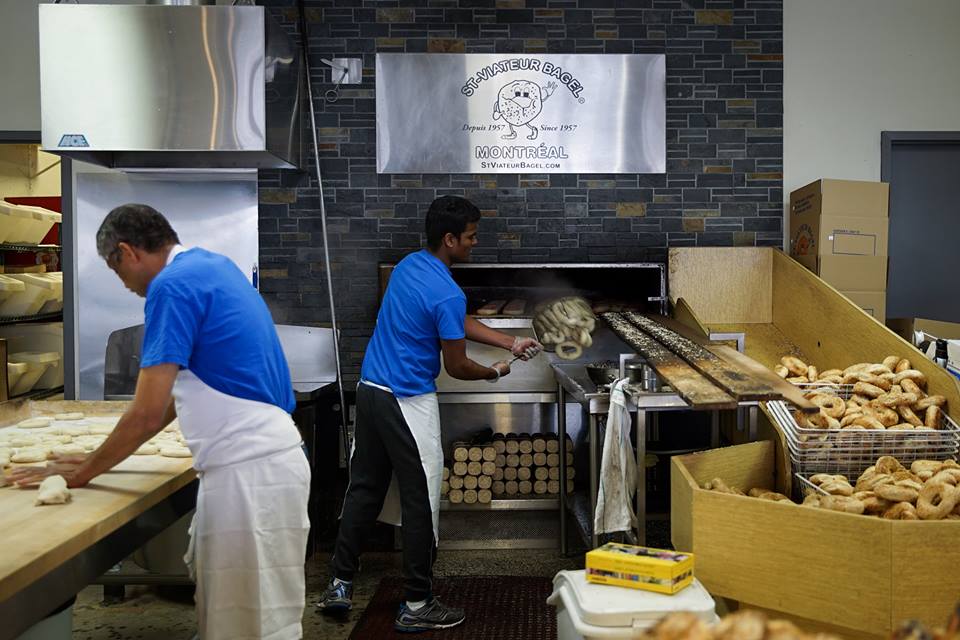 It’s not in the United States, but it needed a shout out. | St-Viateur Bagel Shop via Facebook

Next, we leave the states for another place in North America famous for unforgettable bagels: Montreal, Quebec. Some people will argue that Montreal’s out-of-this-world bagels are actually better than those from New York. In a nutshell, they’re thinner and sweeter, with bigger holes. The secret to their popularity? They’re boiled with honey, then baked in wood-fire ovens. The result is a crunchy crust full of flavor.

The next time you find yourself in Montreal, stop for a bagel at Bagel St. Viateur. The shop has six branches, and at some of them you can watch the cooking process. Some of the locations also feature bagel sandwiches and Jewish deli-type salads. If you won’t find yourself anytime in Montreal soon, they ship to the U.S.!

Next: This state features a bagel shop that’s all unicorns and rainbows. 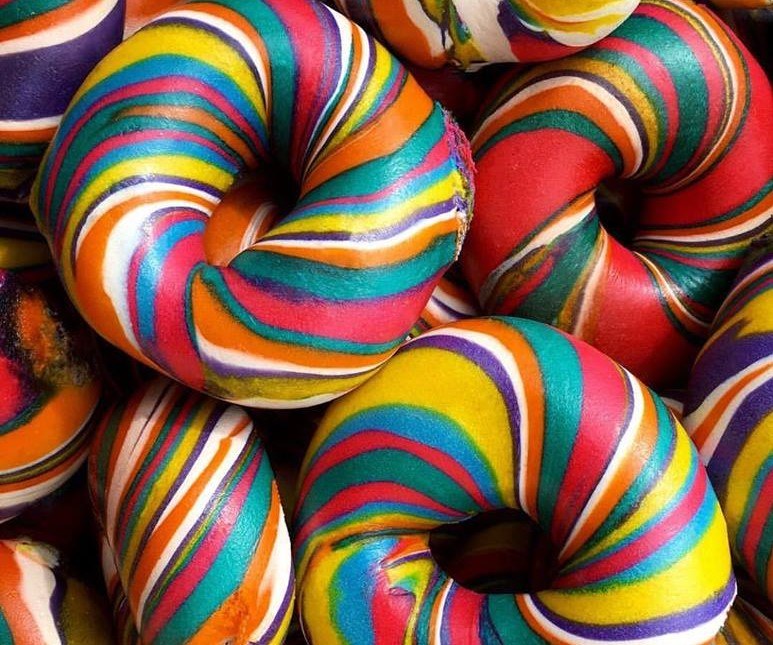 Get your rainbow bagel fix. | Bagels and Brew via Facebook

Some bagel shops do stand out in the sunny state of California. And in true California style, you can order up a rainbow-colored “Unicorn Bagel” at Bagels & Brew. The family-owned mini-chain creates its kettle-boiled, hearth-baked bagels onsite. The resulting treat is chewy on the outside and light and fluffy on the inside. Choose from 25 different flavors and a variety of toppings.

Next: A state offers a softer variation on the New York style. 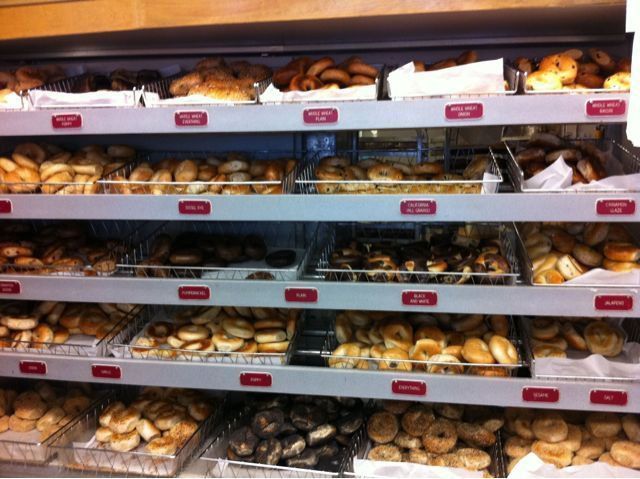 Although Boston has a reputation for bagels smaller and softer than their chewier New York City counterparts, one shop near Boston is known for bagels somewhere in between the two extremes. Kupel’s Bakery offers imperfectly-shaped bagels in 20 varieties. The most popular flavors are sesame, egg, and poppy seed. And you should know this shop has also been praised for its crazy good cream cheese spreads like scallion, honey walnut, peanut butter, strawberry, and green olive.

Next: A state where you’ll get bagels on your doorstep before dawn. 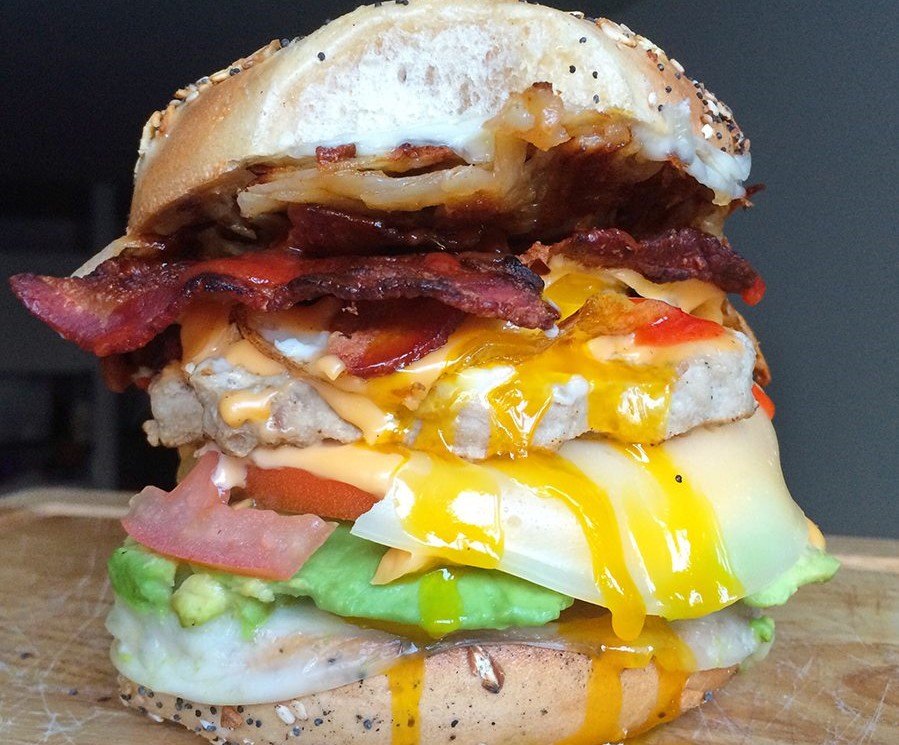 The bagels are made in small batches for ultimate freshness. | Kupel’s Bakery via Facebook

The bigger cities in Ohio are known for some highly-regarded bagel shops. Sammy’s New York Bagels in Columbus has been voted best bagel in Ohio many times. To ensure freshness, the bagels are made in small batches, kettle-boiled to create a glistening outside with a soft and chewy inside. Sammy’s is known for its convenient delivery services, dropping off the fresh goodies on doorsteps before dawn.

Next: A state where Montreal bagels are successfully replicated. 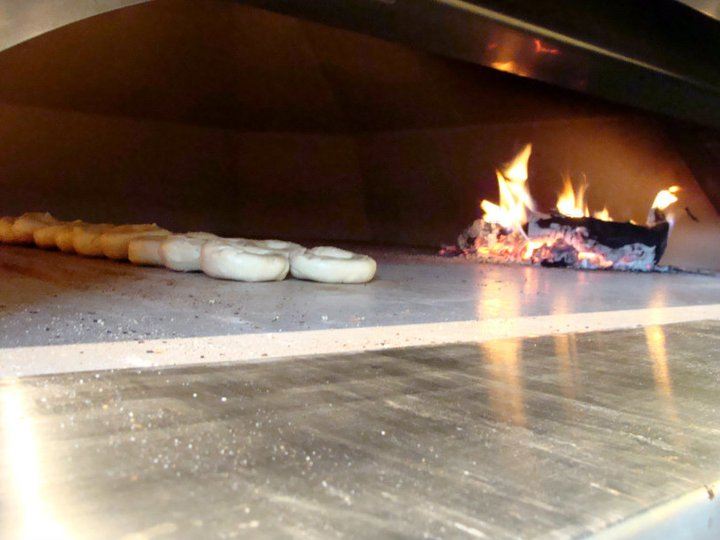 They are hand rolled and placed in a wood fire oven. | Eltana via Facebook

Seattle’s Eltana Wood-Fired Bagel Café is a mini-chain featuring Montreal-style bagels. They’ve been described as the best bagels in the area, with a trademark chewy outside and a soft, mildly sour inside. These goodies are hand-rolled and then baked in a large wood-fire oven. The finished product is charred in spots, providing a hint of smoky flavor. Ten variations are offered, with 14 spreads to choose from.

Next: A Southern state’s bagel shop sells out in a flash. 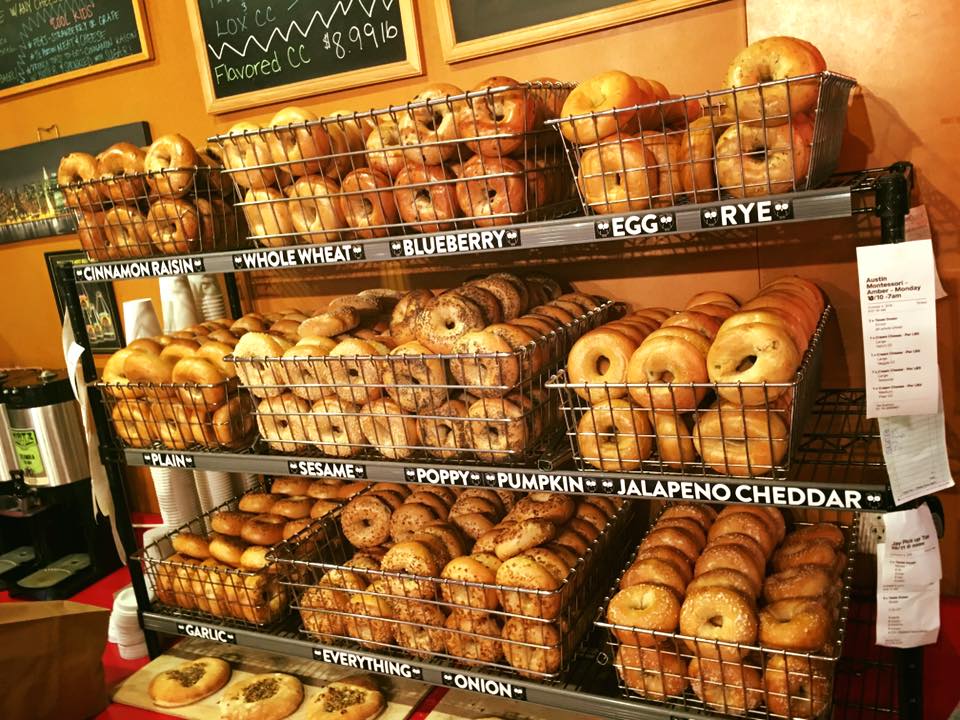 They typically sell out by 1 p.m.. | Wholy Bagel via Facebook

The innovative city of Austin, Texas, offers up Wholy Bagel, founded in 2010 by a former bakery supply salesman from New Jersey. These large bagels are made by hand and kettle-boiled. The next time you’re in the area, be sure to stop by for one of these gems before 1 p.m., since that’s the time each day they’re usually sold out. Or, order up a true Texas-style baker’s dozen of 14. Specialties include salt, everything, sesame, and onion. 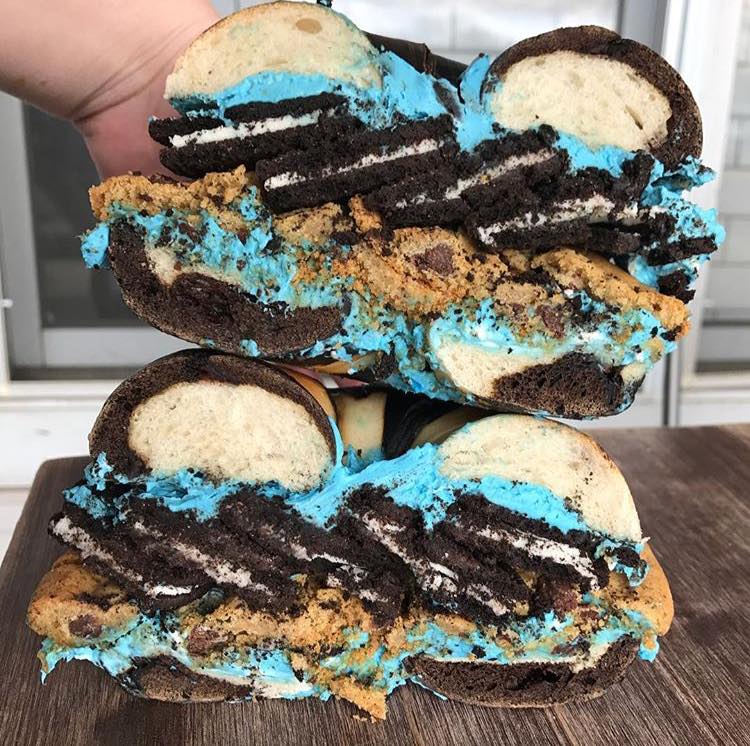 These are not your traditional bagels. | The Bagel Nook via Facebook

If you’re a traditional bagel purist, The Bagel Nook may be a little revolutionary for you. The shop serves up more than a dozen wacky bagel and cream cheese flavors. The cereal-centric “overload” bagels come topped with treats such as Cocoa Puffs, Cinnamon Toast Crunch, and Fruity Pebbles. Or, if you’re not in the mood for breakfast cereal on your bagel, you can opt for one topped with Oreo cream cheese and Oreo cookies instead. The shop became an overnight sensation after it was featured in a BuzzFeed video that went viral in 2016. And when Kelly Ripa tried a taste on her morning show, that didn’t hurt business either.

Next: A state where New York-style bagels are scarce 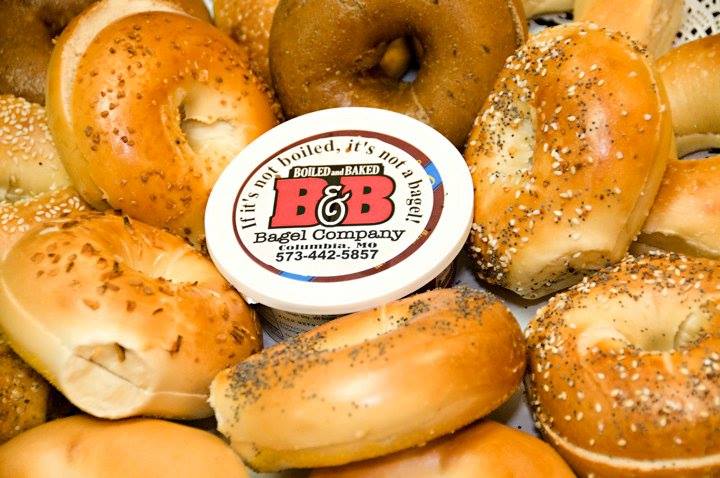 They claim to be the only ‘New York Style’ bagel in the area. | B & B Bagel Company via Facebook

Truly tasty bagels can indeed be found in the Midwest if you do some proper digging. Take B&B Bagel in Columbia, Missouri, for example. Bagels are made from scratch and served all day. The shop’s website touts their bagels as “the only real ‘New York Style’ water bagel in central Missouri.” Similar to New York bagels, these are made through the boiling in water process. Choose from breakfast or lunch sandwiches served up on bagels. Another popular menu item is the pizza bagel.

Next: Beer-boiled bagels enjoy a following in this state. 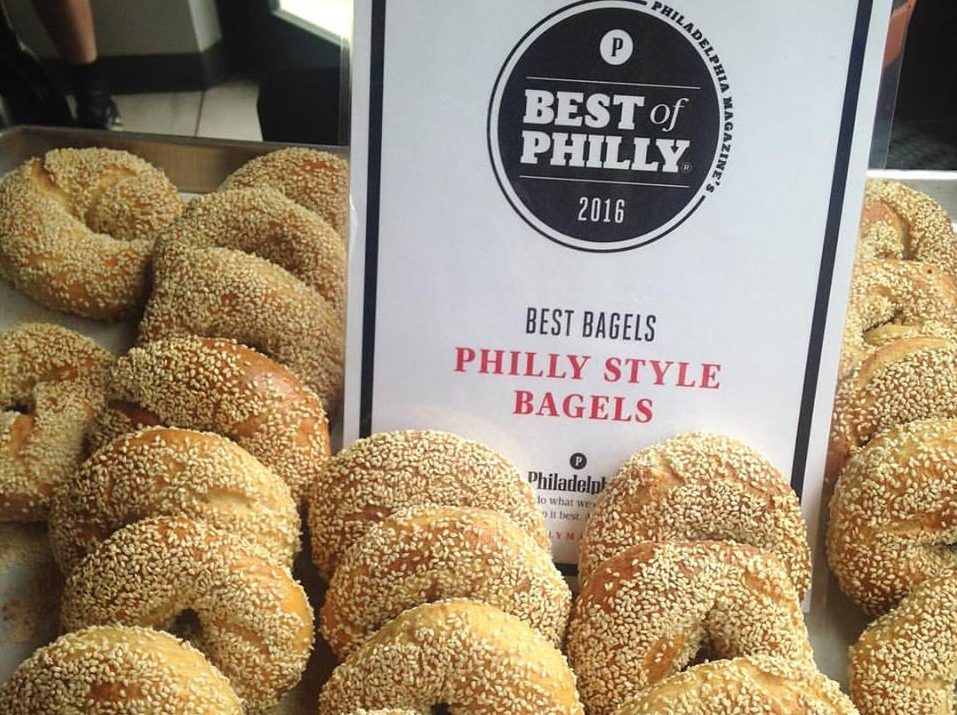 Philly Style Bagels wants to spread the word about a new kind of bagel. They’ve taken the traditional New York style bagel (hand-rolled, boiled, then baked), and added an interesting twist: Boiling the bagels in a mixture of beer and water for a special malted flavor. Bite into one of these and you’ll enjoy a crunchy outside with a soft inside full of malty sweetness. Bagel options include sesame, poppy, salt, everything, and garlic. They pair well with toppings like scallion cream cheese and earth balance.

Next: A state with a hidden bagel gem in the burbs. 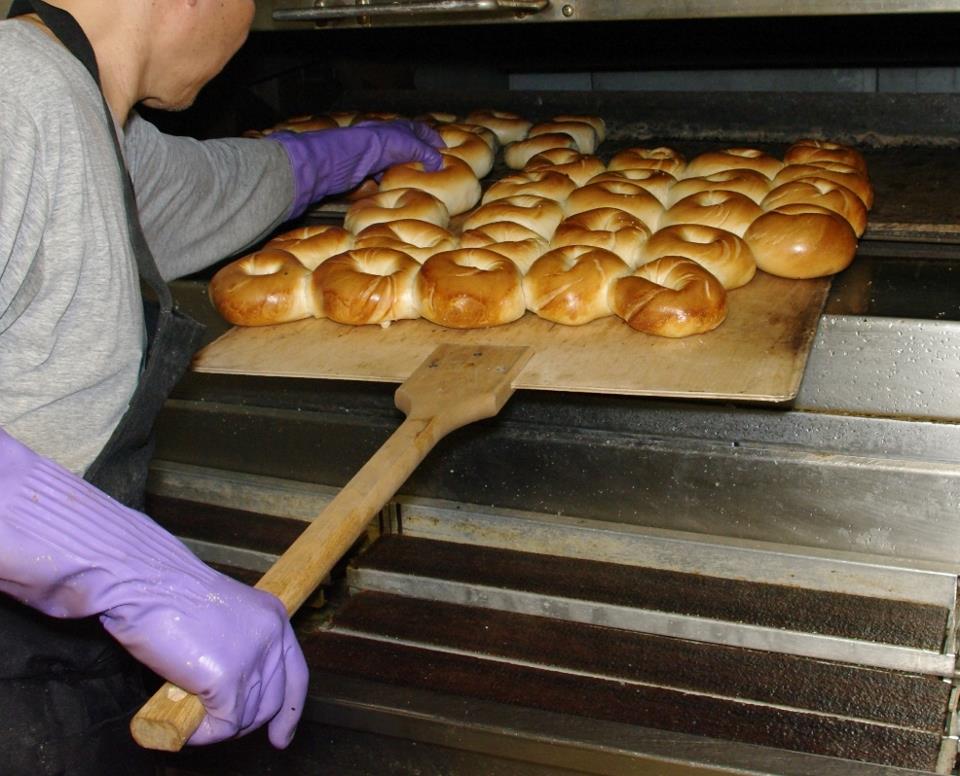 It’s the only place to get the New York style bagel near Atlanta. | BBs Bagels via Facebook

It’s been said you won’t find anything resembling a boiled, New York style bagel anywhere near Atlanta. But you’ll surely score one if you head out to BB’s Bagels in suburban Alpharetta, Georgia. It’ll be worth the 30-mile trip when you sink your teeth into a hand-rolled, kettle-boiled bagel. Classic menu favorites include the smoked salmon platter with a plain bagel, tomatoes, capers, onions, and cream cheese.

Next: A rural state with a surprising number of hit bagel shops 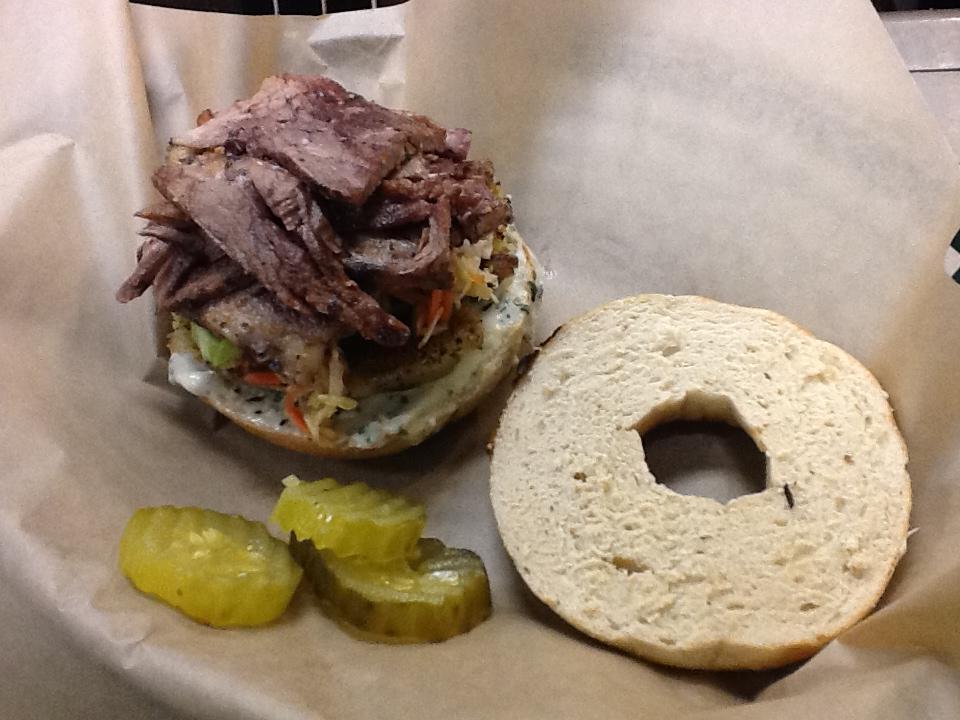 It may be known for its fresh air and its craft breweries, but did you know Vermont can hold its own when it comes to bagels? You’ll find quite a few gems in this state serving up fresh bagels using techniques and recipes of which shop owners are proud. One such place is Myer’s Bagels in Burlington, established in 1996. Chef Lloyd Squires serves up Montreal-style bagels, boiled and baked in a wood-fired oven. Must-try menu items include cheddar-dill bagels with olive-pimiento cream cheese. 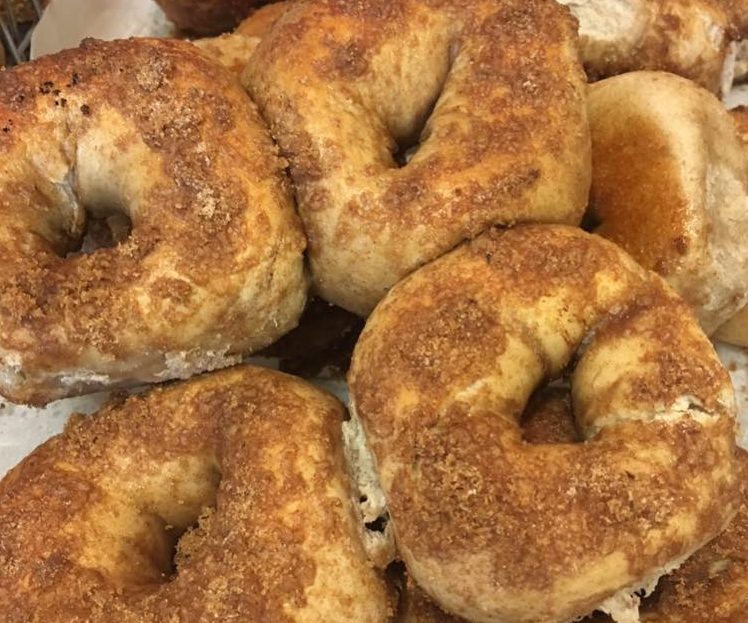 Surprisingly, you’ll find plenty of places tucked in the rolling prairies of South Dakota that serve up fresh bagels daily. Take Bagel Boy in Sioux Falls. These kettle-boiled, made-from-scratch goodies are a town favorite. Fourteen flavor options include honey oat, blueberry, onion, garlic, pretzel, sun-dried tomato, and cinnamon crunch. Bagels can be ordered with toppings or made into a sandwich. As an added bonus, most of the bagels have less than one gram of fat.