If you’re a design lover or architecture buff, you probably already make it a point to get a peek at famous buildings while on vacation. But you don’t always have to be content with a guided tour on your next trip. Some of the world’s best known architects have tried their hand at hotel design or had their buildings converted into lodgings after the fact, which means you can get up close and personal with their work by spending the night. Here are seven beautiful hotels designed by world-famous architects. 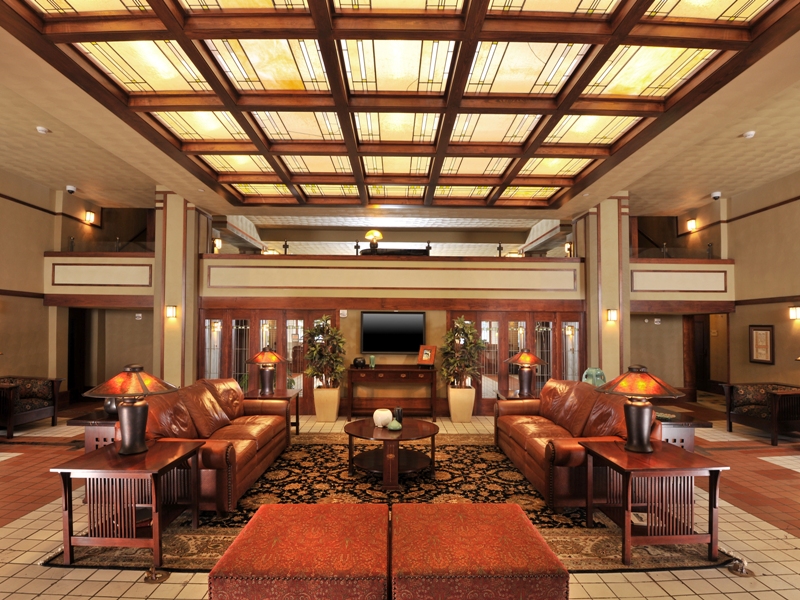 Frank Lloyd Wright, perhaps the most celebrated American architect, designed several hotels over his lengthy career. Only one is still around — the Park Inn Hotel in Mason City, Iowa, which opened in 1910. The 27-room boutique hotel recently underwent a meticulous $20 million renovation to restore it to its former glory (which included repairing a stunning skylight in the lobby) while also upgrading the property to suit the modern traveler with larger rooms and baths with heated floors. 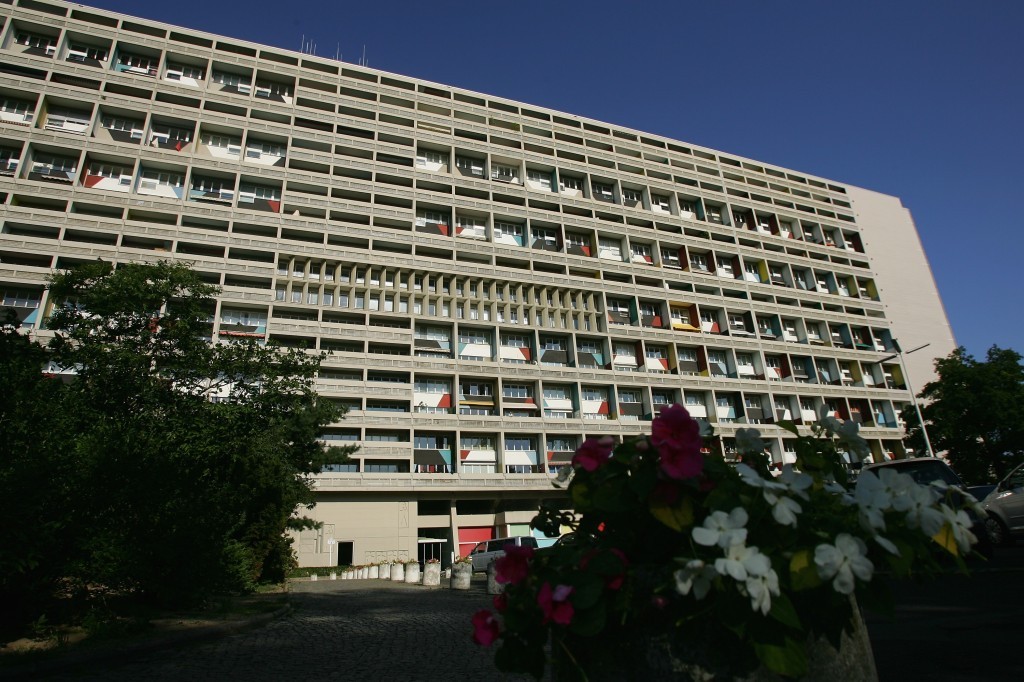 Hotel Le Corbusier from the outside | Andreas Rentz/Getty Images

Swiss architect Le Corbusier envisioned Marseille’s Unité d’habitation as a self-contained vertical city that would help solve the housing crisis in post-World War II Europe. (The image above shows a similar Le Corbusier building in Berlin.) His iconic Brutalist structure went on to influence the design of many apartment buildings and public housing complexes around the world, for better or for worse. Today, the imposing concrete building is still home to more than 1,000 residents while also being a 21-room hotel. The cheapest rooms (which start at €79 per night) are cabin-like, have shared baths, and are sparsely but stylishly furnished in a mid-century style. Some larger rooms have private baths and balconies with sea views. 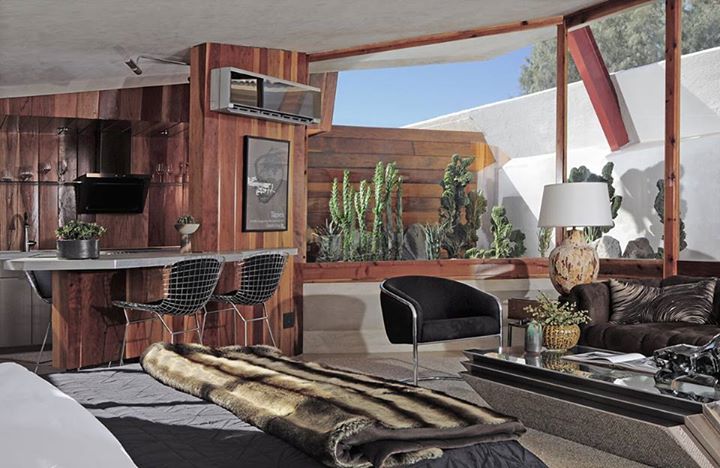 Mid-century modern fanatics flock to Palm Springs, California, to revel in the city’s signature architectural style. While there are plenty of mid-century hotels still standing in the area, the Hotel Lautner in nearby Desert Hot Springs is the one where architecture buffs will want to book a room. Designed by John Lautner, a disciple of Frank Lloyd Wright, the tiny, four-unit hotel was constructed in 1947 as a prototype for a larger planned community that never materialized. In 2011, after years of neglect, it was transformed into an elegant retreat with 700-square-foot suites that merge seamlessly with the desert landscape. 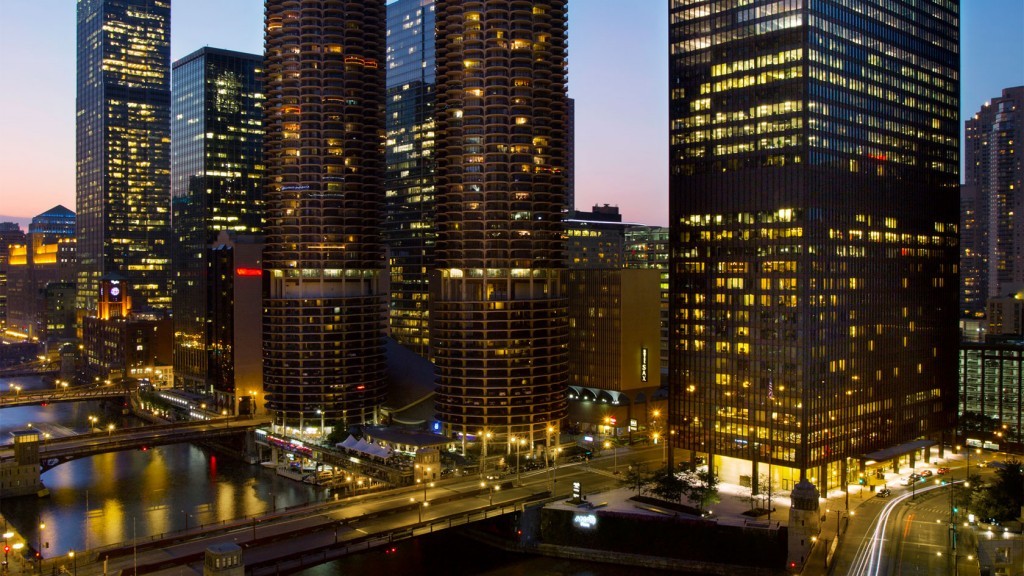 The Langham in downtown Chicago | The Langham, Chicago

Chicago is already a must-visit city for architecture enthusiasts, and visitors will revel in the opportunity to stay at The Langham, a luxury hotel in a skyscraper designed by Mies van der Rohe. The 1973 building on the shores of Lake Michigan originally housed offices (and still does on the upper floors), but the thoughtful, high-end design of this 316-room hotel “manages to overcome the building’s corporate feel to provide an elegant, tasteful stay,” according to The New York Times. 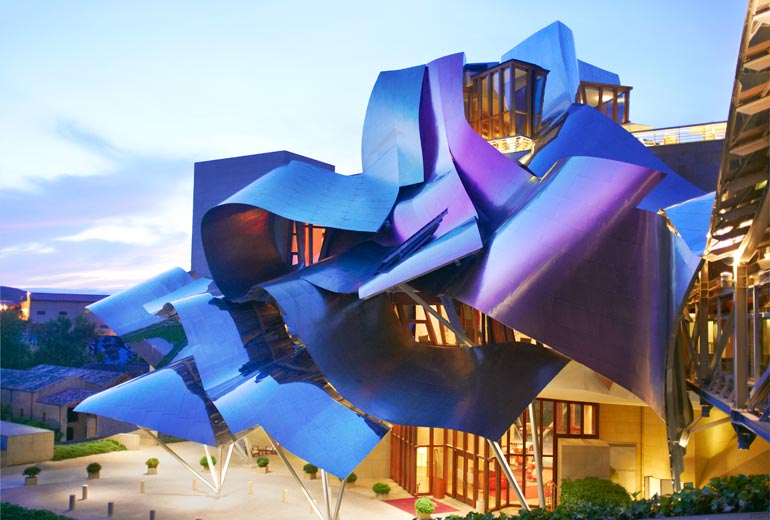 Frank Gehry stuck with his signature swooping style when he designed the Hotel Marqués de Riscal in Elciego, a town in Spain’s Basque region. The 43-room property is designed to appeal to discerning luxury travelers who will appreciate not just the hotel’s unique look but also its on-site winery and Michelin-starred restaurant. If you go, try to get one of the 14 rooms in the main Gehry-designed building, suggests Travel+Leisure, since they have better views.

If Renaissance architecture is more your style, you’ll want to book a flight to Florence for a stay in the Villa San Michele. The building, which was originally a monastery, dates back to the 15th century, and the façade has been attributed to Michelangelo. The boutique hotel’s terraced gardens overlook the city, and The Telegraph declared the views “achingly romantic.”