The Best Whiskey Holiday Gifts for $30 or Less

When a man says he’s a “whiskey kind-of-guy,” your initial thoughts garner much respect for him, and you consider him more of a man’s man — all he’s missing is a sharp suit and a fedora. When a man says this, he’s referring to the fact that he likes the actual taste of whiskey and doesn’t mask it with mixers, bitters, or sours. He might have it on the rocks or with a splash of soda that brings out the taste of the liquor, but none-the-less, the “whiskey man” is a strong purist at heart, no doubt.

For those who aren’t as into whiskey, it can be a daunting and challenging task to pick a sure-fire winner from the hundreds of bottles lining the shelves. Anyone who’s been to a liquor store recently or who frequently finds themselves at a bar on a Friday night knows that whiskey offerings and the desire to know more about them has exploded in recent years. From bottom to top shelf, it’s hard to tell what’s good and price is not always the best indicator of quality (except an aged whiskey, which is like heaven in a bottle). The good news is that you don’t have to pay a lot for a nice bottle of whiskey.

Being that the holiday season is upon us, nothing says, “I love you, bro,” quite like a nice bottle of whiskey that’ll put some hair on your friends’ knuckles. Plus, a nice bottle of whiskey is a great gift to give to your best buddies for the holidays, or even the girl who can’t resist a good Irish whiskey. Here are our best picks for whiskey, all under $30 that you can give to your loved ones.

Here is your quick crash course in whiskey styles:

Bourbon: This American brand of whiskey — first made in the 18th century — reigns from Kentucky (at least the most genuine Kentucky bourbons do). Its distinguishing qualities includes notes of vanilla and oakiness from the barrel. It’s best used in a Manhattan or an Old Fashion but tastes great on the rocks.

Tennessee Whiskey: A famous Sinatra favorite, it’s similar to a bourbon, but don’t dare refer to it as such. It’s bit mellower than a Kentucky bourbon due to the process of it being dipped in charcoal, but is a little sweeter than. Tennessee Whiskey is for the classic gentleman. Drink it alone, in a Jack & Coke, or in a Whiskey Sour.

Rye Whiskey: Here’s where the whisky gets frisky and tricky: In order a rye whiskey to be rye the mash need to be composed of more than half rye, otherwise it will taste like a much drier version of bourbon, which coincidentally rye whiskey is also used to make a Kentucky bourbon. Rye whiskey is for the person that needs something less sweet than a bourbon, specifically something rougher and spicier. Try it in a Sazerac or as an alternative to bourbon Manhattan, which makes it taste much differently.

Scotch: A noted fave of Ron Burgundy, stay classy by drinking scotch. Get ready for this: It’s the most misunderstood and confusing whiskey that a man may need to develop a taste for. The secret to a good scotch whiskey, produced in its namesake country, is all about the aging. It needs to sit in a barrel for least three years — the longer it sits the better it tastes. Scotch is a malt whiskey, although it can be grain. Its defining flavor is smokey, which is peat, and intense wood and floral notes. Scotch it meant to be enjoyed on the rocks.

Irish Whiskey: Irish whiskey happens to be most popular in the world and coincidentally the best for taking shots. It’s a neighboring whiskey (geographically speaking) to Scotch, and this spirit is extra smooth due to a lack of peat, aged three years in a cask and then triple-distilled in preparation for you to drink. It is most often blended, usually single malt and it marked by its smoothness and sweetness, allowing it to go down easy. Drink Irish whiskey how you please but it makes a great sour and an Irish coffee.

Canadian Whiskey: A lighter, some say watered down whiskey, some referring to it as “brown vodka” is a blend of liquors based on corn and other grains, is often times comparable to rye whisky due to its pronounced rye and caramel notes. This is for the man that is just getting into whiskey. Canadian Whiskey tastes great with a mixer of your choosing or shoot it back. 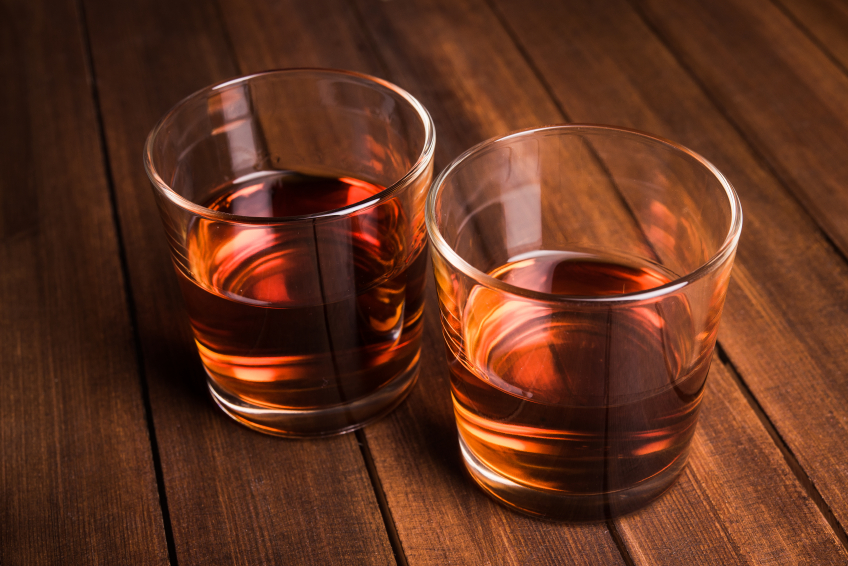 This is a delicious mild blend of spicy, lemony, and malty notes, with charred wood and vanilla undertones. This Irish whisky stays true to its roots: It is light bodied, sweetly spiced, buttery, and rounded with light citrus fruitiness. Ideal for the occasional whiskey drinker.

Bulliet is the standard bearer for rye whiskey. It leans toward a fruity side, but with subtle pepper and spice notes to finish. Ideal for the person who is slowly getting into different types of whiskey, specifically rye whiskey. It enjoys the recognition as one of the highest quality ryes available.

This one is an absolute steal. Buffalo Trace Kentucky Straight Bourbon Whiskey is made from the finest corn, rye, and barley malt, this whiskey ages in new oak barrels for years in century old warehouses until the peak of maturity. The Buffalo Trace Distillery consistently makes some of the best and most desirable whiskies on the planet, and this is one of its best offerings.

The taste is rich, smooth, and complex, with hints of vanilla, toffee, and candied fruit. It is extremely versatile and never disappointing. Ideal for the person with refined tastes.

This is yet another great whiskey offering for under $30. This high-rye bourbon starts out with sweet fig and nougat, developing then into minty spice and citrus fruit notes into a sweet popcorn finish. The bottle is gorgeous so it’s the best one of all of them to gift. Ideal for the person that loves interesting tastes and good looks.

Jack Daniels is one of the most recognized Tennessee whiskies in the world and one of the most popular brands of whiskey in the U.S. today. It is filtered through 10 feet of sugar maple charcoal, giving it its smooth distinct taste, and making it ideal for the person that loves a surefire classic.