The United States has seen its share of abandoned buildings. But the U.S. is also filled with dozens of abandoned towns whose buildings are still standing but populations are at zero. Most of the towns on this list were abandoned after the gold rush, but some were built and abandoned for different reasons. Here are 15 of the coolest ghost towns in the country — and you can still visit all of them. 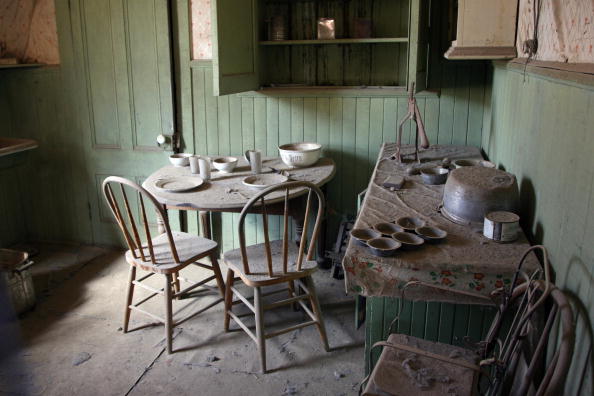 Bodie was originally a mining town that thrived during the 1800s. By 1880, the town had about 10,000 residents. And at one point, there were reportedly 65 saloons throughout the town. The town thrived but also proved to be dangerous in terms of money, alcohol, and drugs. But in the early 1900s, the town began to decline. The mine profits began to dwindle, and in 1917, the Bodie Railway was abandoned. By 1942, all the mines had closed because of World War II, and residents left town. Eventually, it was ghosted. In 1961, it was designated a National Historic Landmark. Today, plenty of visitors go to explore the still-standing buildings, frozen in time.

Next: This town was originally established as a railroad town.

Thurmond, West Virginia was originally established in 1903 as a railroad town. But by the 1920s, plenty of coal was coming through, and the town was at an all-time high. But by the 1950s, things had hit a downturn. The main hotel burned down, and the bank closed soon after. Eventually, the residents moved out, leaving behind an entire town’s history. But technically, the town still has five residents (according to the 2010 census). Today, Thurmond hosts the Thurmond Triathlon and is surrounded by hiking trails and New River, where people visit to boat and fish.

Next: This Colorado town thrives during the late 1800s.

St. Elmo is another ghost town that thrived in the late 1800s due to its mining industry. The town had about 2,000 people and more than 150 mines graced the area. The Mary Murphy Railroad ran through the town, but in 1922, it was shut down. The mines had found all the gold they could, and little by little, miners started to leave. Eventually, others left, too, and St. Elmo became a ghost town. Today, though, it’s a popular tourist attraction and has a general store that is open year round. The surrounding area is popular for fishing.

Next: This town was originally named after a rock.

The town of Rhyolite was originally named for the igneous rock, rhyolite. The town got its start as a mining town in 1904, and the town was so impressive that it even had a stock exchange and Board of Trade. But in 1907, mining issues caused a financial panic. People began to leave town, and the newspaper went out of business. Finally, production of the mines was halted completely in 1911, and by 1916, the power to the town was cut off. The town had become deserted, but today, it’s a popular tourist attraction. The bank, bottle house, and train depot are the only three buildings still standing.

Next: This town became popular because of its silver industry.

This California town was known for its silver mining industry. Over the 12 years after it was established in 1881, the town produced more than $20 million in silver ore. But by the 1890s, silver had lost its value, and the town met its demise. The miners abandoned the town to try to find more work and took their families with them. Eventually, it became a ghost town. The town was restored by an investor in the 1950s, and today, it is a historic national landmark and sees visitors from all over the area. It currently has active shops and restaurants, giving tourists a true 1800s vibe.

Next: This town was its state’s first capital.

Cahawba, Alabama (also spelled Cahaba), was Alabama’s first state capital when it was founded in 1819. However, the location of the town proved to be detrimental because it frequently flooded and brought mosquitoes that would spread deadly diseases. People eventually deemed Cahawba dangerous, and the state’s capital was moved to Tuscaloosa in 1826. But Cahawba resurfaced as a port town where steamboats could dock, and a railroad was built in 1859. However, the Civil War came, and the town’s economy faltered. Eventually, it was only used to house prisoners, many of whom died in a steamboat explosion as they were being freed. The town was deserted, and today, it is an archaeological site and few buildings are still standing.

Next: This Wyoming town was at the center of the Gold Rush.

South Pass City was once thriving due to the gold mining industry. It was founded in 1867 when gold was first discovered in the Wind River mountains near the town. In just one year, South Pass City had 250 buildings and more than 1,000 residents. The town eventually grew to 3,000 residents and was bustling with shops, restaurants, and saloons. But it declined just as quickly as it grew, and by 1872, only a few hundred people called South Pass City home. The town saw a few ups and downs for years, but eventually, even its few hundred residents left. By 1949, the last few people had moved, and the town was officially deserted. Today, it’s a popular tourist attraction.

Next: These two Montana cities were only a mile apart.

Virginia City and Nevada City were two towns within a mile of each other that served as bustling communities during the gold rush. Both cities were established right around the same time, in 1863, and served as the home of miners who mined Alder Gulch. But over time, many of the town’s residents moved on to other mining sites, and Alder Gulch was set to be dredged in 1896. Many of Nevada City’s buildings were destroyed because of the dredging, but many of Virginia City’s buildings were left intact. Both towns have been restored today, and Virginia City actually has about 200 residents.

Next: This town isn’t easy to get to, but it’s a popular tourist attraction.

Kennecott (also spelled Kennicott) was a town at the forefront of Alaska’s copper mines in the early 1900s. The town boasted five mines and was a hub for nearly 30 years. But by 1930, the ore bodies were pretty much spent — the first mine had closed in 1929. By 1938, all of the mines were shut down. The town was deserted until the mid 1950s (except for one family of three). In the 1950s, there was an attempt to transport ore from the town by aircraft, but it fell through. By the 1980s, the town had become a tourist attraction, since it had been deserted for three decades at this point. The area was designated a National Historic Landmark in 1986, and it is still a tourist attraction today.

Next: This town has been restored, but it’s still technically an old ghost town.

Terlingua was home to the Chisos Mining Company, which was established in the 1880s after cinnabar (from which mercury can be extracted) was discovered. It drew many miners to the area, and soon the population boasted around 2,000 people. But, similar to other mining towns, the fun didn’t last. Eventually, the miners moved on to bigger and better mines, and Terlingua was left a virtual ghost town. But today, it’s a popular tourist spot and is home to the Terlingua Trading Company, a chili cook-off, and even a championship racing team.

Next: Some say this town is haunted.

Swan Island (not to be confused with Swan’s Island, near Bar Harbor) is an old, abandoned ghost town near the Kennebec River that dates back to the 1700s. The island has five homes still standing, plus a cemetery, and is said to be haunted. The state of Maine allows campers, but those who have camped overnight say it’s a bit creepy. Not much is known about the town’s history, but the homes on Swan Island are from former residents of the town of Perkins, and the small area has long been forgotten. It remains frozen in the 1700s and makes for a very interesting tourist attraction.

Next: This was another town that was born out of the Gold Rush.

The town of Goldfield is another town that was established due to the abundance of mines. The gold mines in the area brought miners and their families in, and the town was full of energy for a few years in the late 1800s. But by the early 1900s, things had already begun to dwindle. Residents began to leave, and the town tried for the next 20 years to revive itself to no avail. But still more than 100 years later, the town remains standing. Tourists from all over the Arizona area come to see what was once a miner’s paradise.

Next: This mining town is extremely elevated.

Animas Forks’ claim to fame is that it’s one of the most elevated mining towns in the U.S. at 11,200 feet. It was originally established in the 1870s, and it didn’t take long for the town to become popular. The town even had its own newspaper, which stayed in print for 10 years (that was considered a pretty long time for a mining town). By the late 1880s, the town’s mining industry had begun to decline. It wasn’t long before the miners deserted the town to find life elsewhere. But today, the town and the surrounding mountains are still a popular tourist destination.

Next: This is another ghost town with a haunted reputation.

Garnet has a reputation for being haunted. The town dates back to the 1860s but didn’t really thrive until the 1890s, when it had a population of more than 1,000. However, just like most other mining towns, when the gold was no more, the people were no more. It became another abandoned ghost town. And today, some people say it’s haunted with creepy noises (like someone randomly striking piano keys) and supposed ghosts. But the state of Montana allows volunteers to live there while they take care of the town, so if you’re interested, you can sign up — just be prepared to have no electricity, WiFi, or running water.

Next: This town sits right in between two states.

Glenrio sits right in the middle of the New Mexico and Texas border. The town was built as a railroad town, and though it never had a large population, it was a very popular area to visit by the mid 1910s. During the 1920s, the town was prosperous and was home to hotels, bars, shops, and more. It stayed significant until Interstate 40 was built in 1959, which bypassed the town and led to its demise. Now, the buildings are abandoned, but the town still welcomes visitors who wish to explore the historic Route 66.