It’s no secret savvy grocery shoppers have some serious love for Trader Joe’s. The food’s delicious, the prices are perfect, and the Hawaiian-shirt-clad staff actually know what they’re talking about. Basically, the place is almost too good to be true. Seriously. Even the frozen food aisle is something to talk about. So, let’s get to talking, shall we?

If you’re interested in the best that Trader Joe’s has to offer, stick around to discover 15 frozen food staples you should definitely have in your freezer, all of which were named in the Trader Joe’s 9th Annual Customer Choice Awards. Now, it’s time to kick off the countdown to the No. 1 best frozen food must-have, which also happens to be the overall fan favorite. 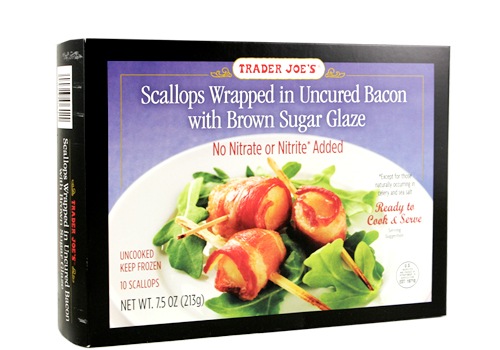 If there’s one food trend we can get behind, it’s bacon. Bacon on burgers. Bacon on doughnuts. Heck, bacon on anything. Without a doubt, bacon has made its way onto just about everything, including this list. And we’re not surprised, because it’s just that good. And this product is no exception.

So, be sure to put Trader Joe’s Scallops Wrapped in Uncured Bacon with Brown Sugar Glaze on your shopping list. You won’t regret it.

Next: Everyone needs their veggies. 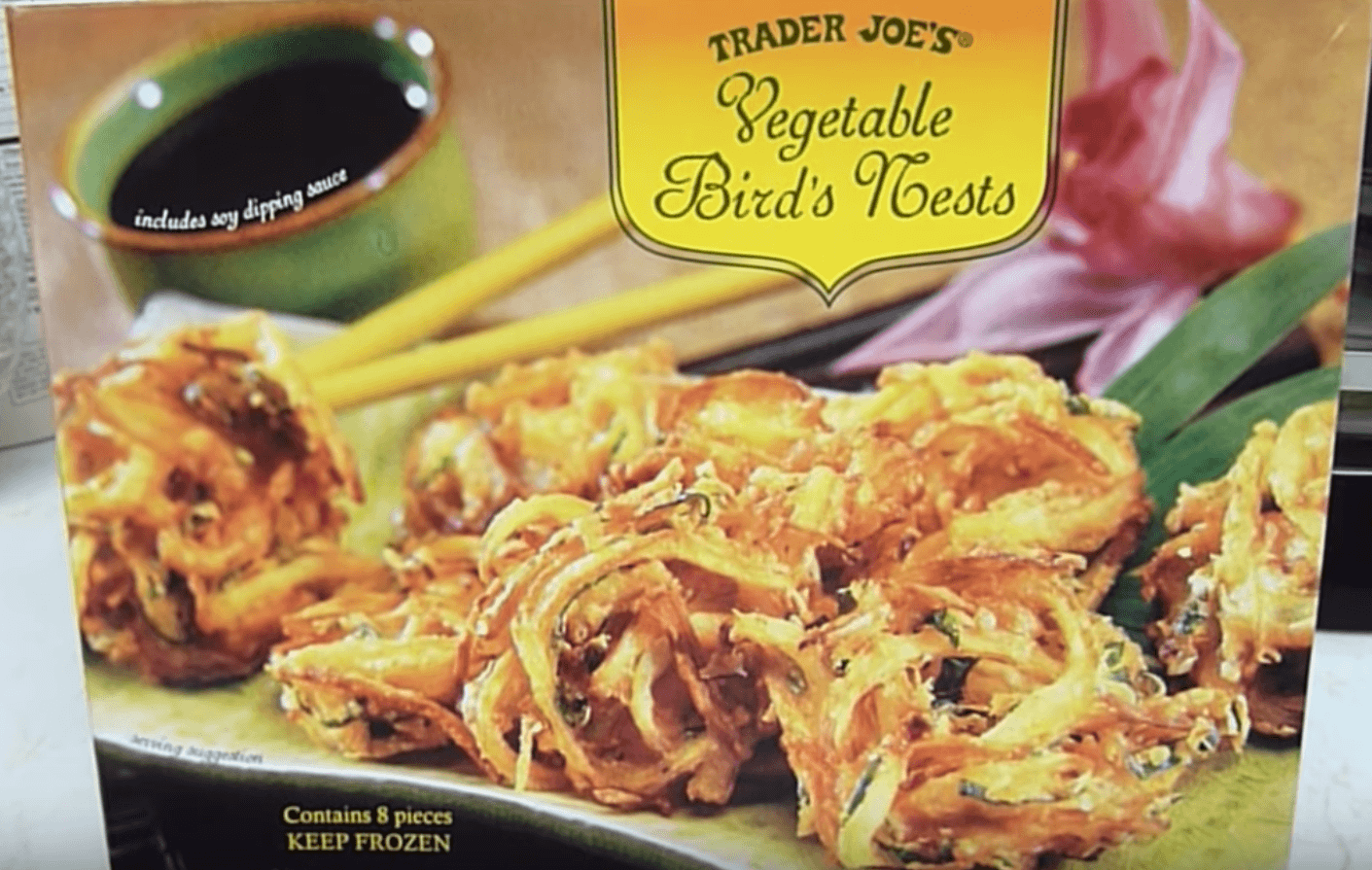 Looking for a way to get your veggies the whole family will love? Well, the people have spoken, and they’ve chosen the Vegetable Bird’s Nests as a top contender.

“They are my go-to get-together food,” Real Simple editor Stephanie Sisco says. “Crispy patties— or ‘nests’ if you will— of shredded carrots and zucchini along with the accompanying soy sauce makes this easy appetizer a no-fail crowd-pleaser.”

Next: Not all frozen varieties are created equal. 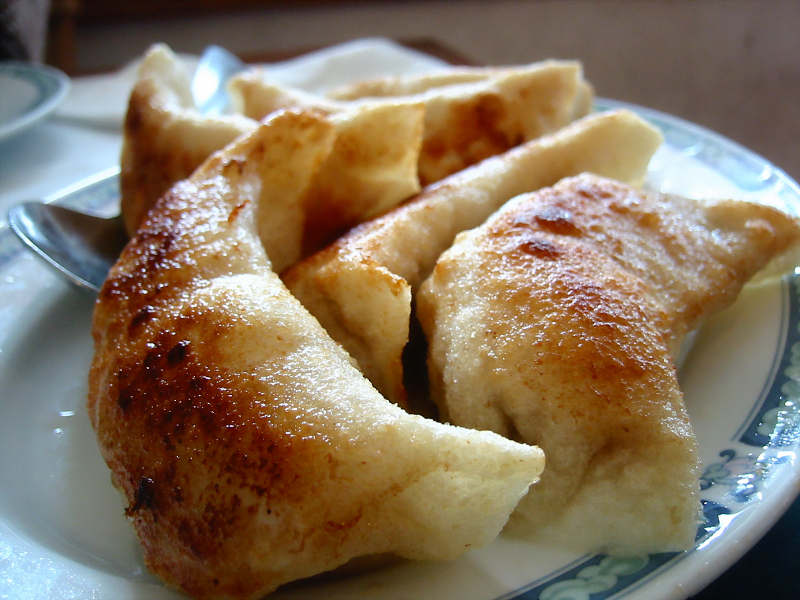 There are plenty of frozen pot stickers on the market. But few compare to the product Trader Joe’s makes, which is why these belong in your freezer at all times. Plus, they come in handy for more reasons than one. According to PopSugar, “They make for a quick snack or a complete meal when paired with rice and kimchi.” Ah, perfection.

Next: Another crowd-pleasing appetizer 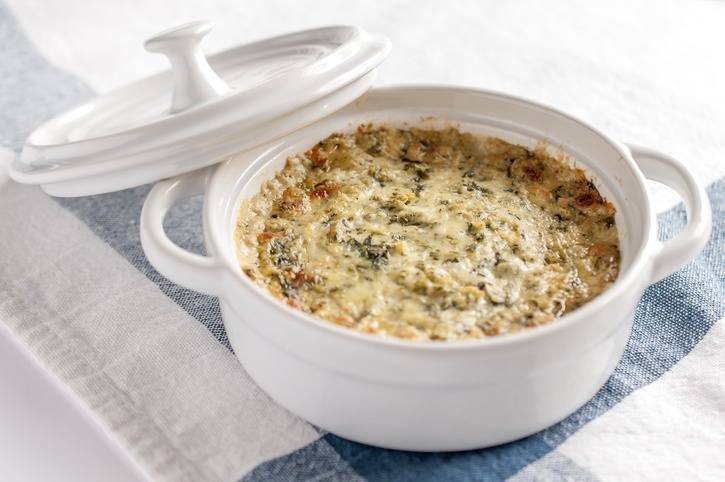 Trader Joe’s Creamy Spinach and Artichoke Dip is exactly what you’re overstock of pita chips and crackers have been looking for. And you won’t have to work hard to make an app everyone will love. After all, crafting the perfect dip can be tough. Thankfully, Trader Joe’s has done it for you.

Next: And the frozen food appetizer favorite is … 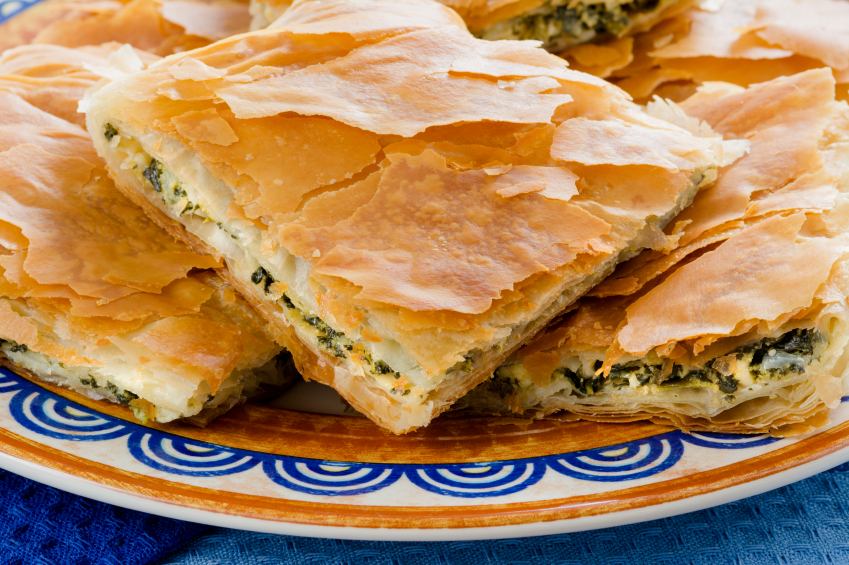 If you’re looking to get your Greek on, look no further than a healthy dose of spanakopita. Seriously. The flaky pastry crust is filled with tasty spinach, creamy ricotta, and flavorful feta, making these perfectly-portioned triangles a total no-brainer.

Next: And now, let’s get to the dessert category. 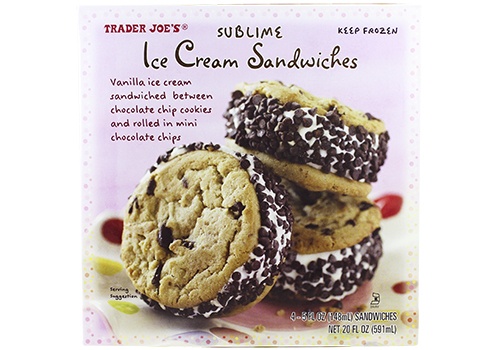 Chocolate chip cookies stuffed with ice cream and rolled in mini chocolate chips? Well, that really is sublime. Plus, it’s a dessert the whole family can agree on. And what’s better than that? 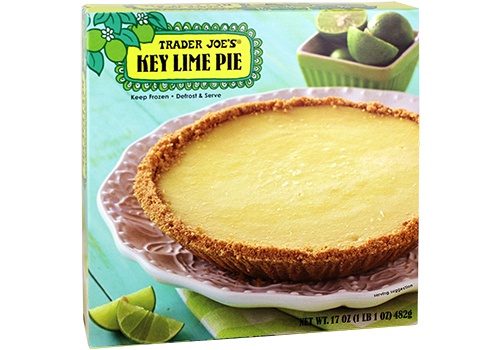 Trader Joe’s Key Lime Pie lovers rejoice, because this summertime staple is back, baby. And it’s as good as ever. “You would never in a million years guess that this pie was previously frozen,” The Kitchn writes. “Its tart, tangy key lime curd and buttery graham cracker crust taste like the real deal.”

Next: This For the more sophisticated palates 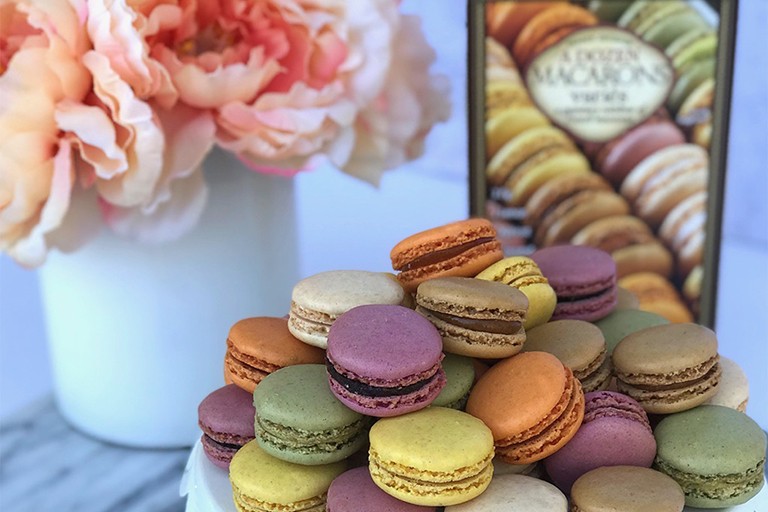 Trader Joe’s Macarons Variés are the pint-sized treats people can’t get enough of. And who could blame them? Colorful in appearance and authentic in taste, these treats come in apricot, coconut, fig, salted caramel, lemon, and pistachio.

Next: There’s always room for this classic. 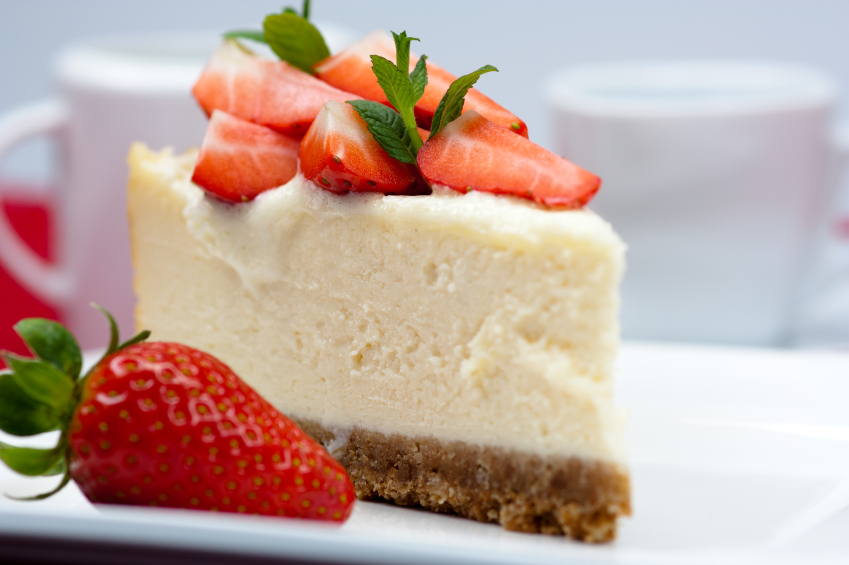 There’s only one type of cheesecake worth eating, and that’s the Big Apple kind. Obviously, Trader Joe’s knows that. Enter Trader Joe’s New York Deli Style Baked Cheesecake, the decadent dessert that’s totally worth it. And according to The Kitchn, “This classic cheesecake is delightfully creamy and tastes much better than the price tag would suggest.”

Next: And the frozen food dessert favorite is … 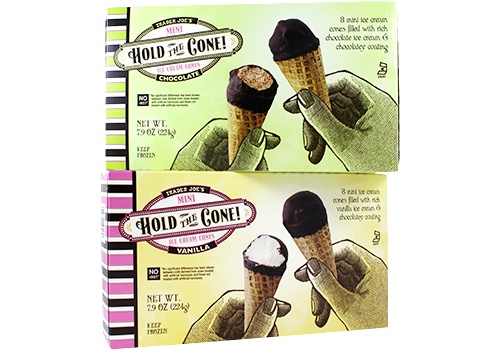 The people have spoken, and they’ve chosen this item as the frozen dessert favorite. In fact, people have been loving the Hold the Cone! Mini Vanilla Ice Cream Cones since they first came out.

Next: This is better than take-out. 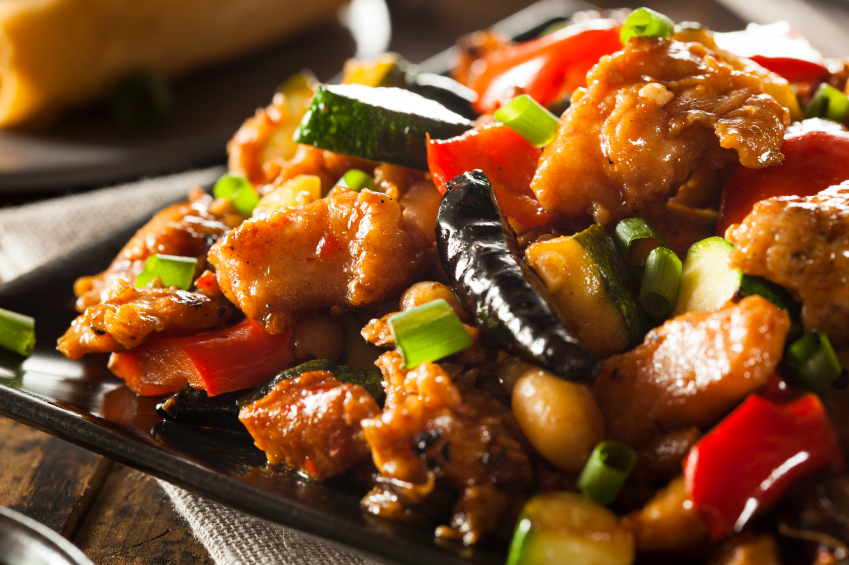 Trader Joe’s Kung Pao Chicken comes complete with meat, veggies, and spicy soy ginger sauce. Basically, it’s all you need to cook up an authentic Asian meal right at home. Not to mention, it can come in handy when you’re dealing with a hangover, too.

Next: Two kinds of this dish make the list. 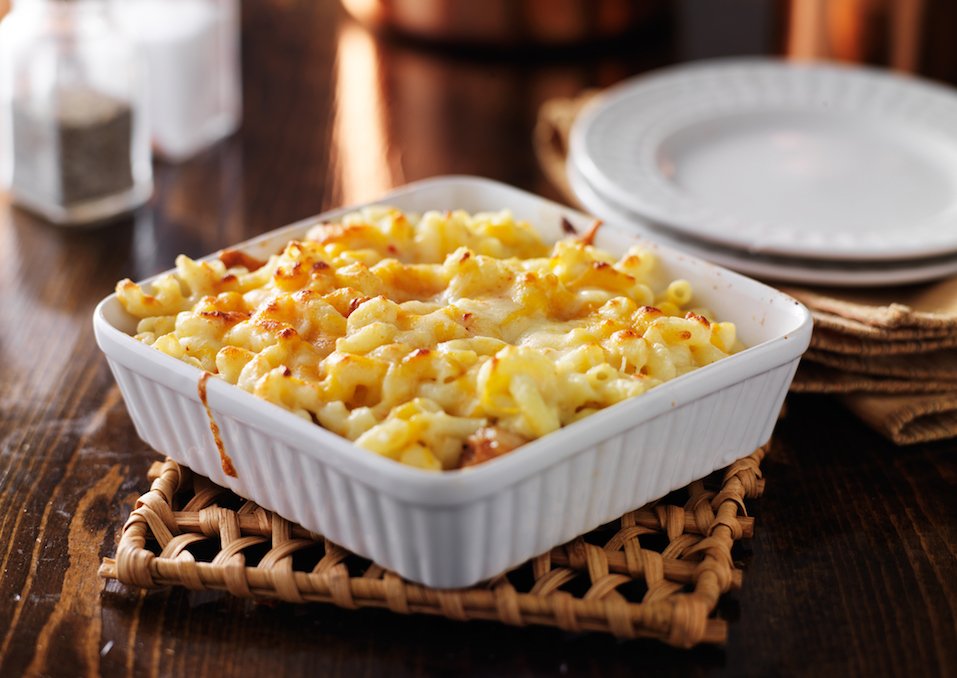 OK, guys, it’s time to talk mac and cheese, because all that gooey goodness is oh-so-good. Trader Joe’s, of course, knows that, which is why it has not one, but two kinds of ‘roni in the freezer aisle. For starters, there’s Hatch Chile Mac & Cheese, which is ideal for those who prefer their mac and cheese with a kick.

And then, there’s a milder version, which is coming up on page 14.

Next: Just as good, if not better than, the real thing. 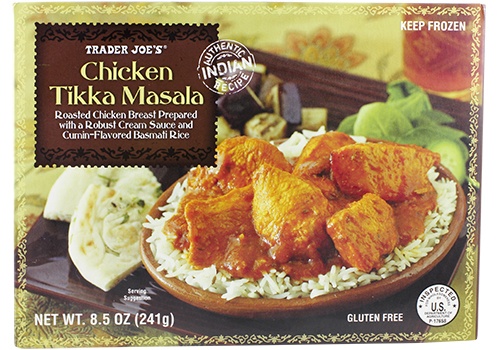 Employees and customers alike can’t get enough of the Trader Joe’s Chicken Tikka Masala, and there’s a good reason for that. The dish “features chunks of chicken that have been roasted in an oven, or tandoor, and served in a creamy, mildly spicy, tomato-based, curry flavored sauce.”

Is it so good that it could even rival the best Indian restaurants out there? Some think so.

Next: Everyone loves this variety of mac and cheese, too. 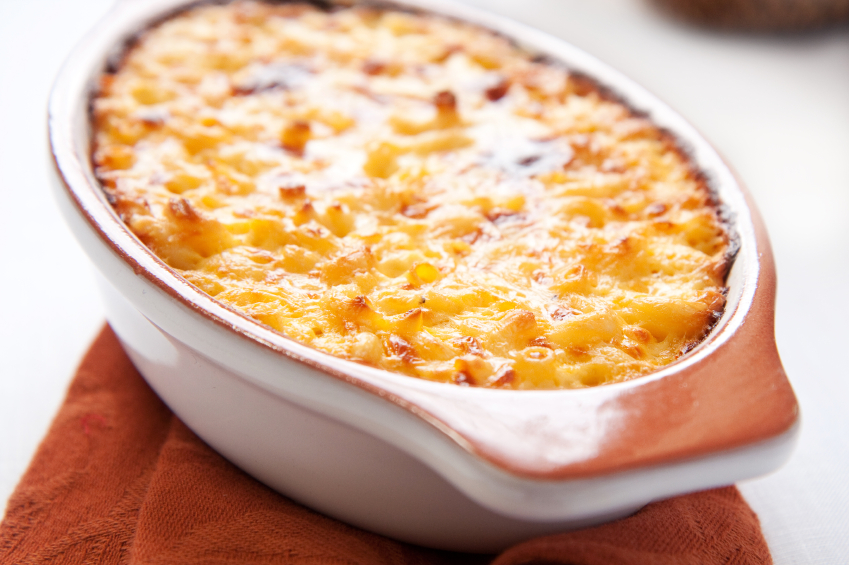 If you prefer your mac and cheese the traditional way, then this one’s for you. Joe’s Diner Mac ‘n Cheese is the no-frills version of the classic, and it’s one people absolutely love. According to PopSugar, “It’s so rich and flavorful, it tastes homemade.” And that’s a tough thing to achieve.

Next: And the frozen food entree favorite is … 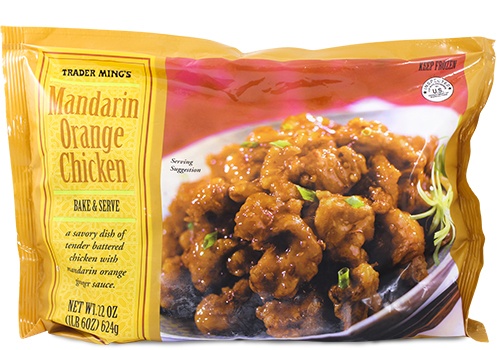 No matter which list of Trader Joe’s favorites you’re looking at, there’s one item that always makes the cut. And that’s the well-loved Mandarin Orange Chicken. It’s so well-loved, in fact, that consumers chose it as the overall favorite in the Trader Joe’s 9th Annual Customer Choice Awards. And that’s a pretty big deal.

Read more: 18 Foods You Should Always Buy at Trader Joe’s