On Monday, the FBI indicted President Donald Trump’s former campaign chairman Paul Manafort and his associate Rick Gates on 12 counts. According to the documents, those included conspiracy against the United States, money laundering, and others. Special counsel Robert S. Mueller III brought the charges as the first step in his ongoing investigation as to whether the Trump campaign colluded with Russia. While Twitter couldn’t agree whether to call it #manafortmonday or #muellermonday, the reactions were top-notch.

First: We all knew Trump would tweet this, right?

1. Trump tweeted, because of course he did 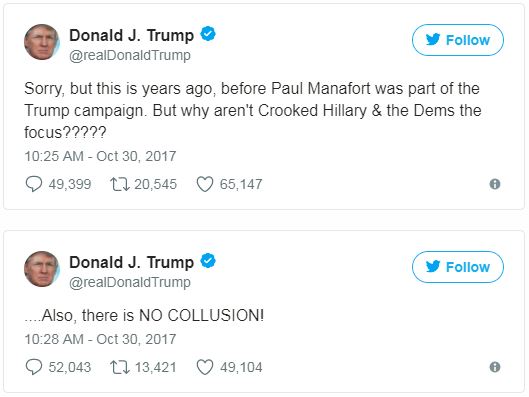 So, let’s recap: Trump tweets that the events that led to Manafort’s indictment took place before he hired him. That means Manafort acted criminally before he joined the campaign. Whether the president knew that or not, it doesn’t look good for him. And as far as the “crooked Hillary” defense, Manafort and Gates aren’t the ones Trump needs to worry about.

According to the New York Times, George Papadopoulos, a former foreign policy adviser to the Trump campaign, pleaded guilty to lying to the FBI about just that topic. Federal investigators reported they suspected Russian intelligence services had used intermediaries to contact Papadopoulos. They allegedly offered  “dirt” on Hillary Clinton in April 2016, in the form of “thousands of emails.” 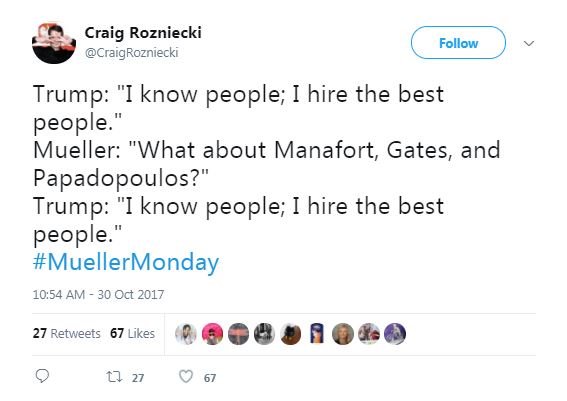 Trump often says he’s the ‘best,’ but in this case, well… | Craig Roznieki via Twitter

The president, who’s a little prone to hyperbole, has said he “hires the best people.” So far, at least three of those have come under FBI indictment. One has pleaded guilty, although Manafort and Gates did not. Many political analysts speculate that Michael Flynn, Jared Kushner, or even Trump’s own children might hit the chopping block soon.

Next: This Twitter user has a witty way of suggesting who’s up next.

3. Who’s on first in the indictment game?

We see what you did there. | Randi Mayem Singer via Twitter

Many experts suggest that the indictment, while it does not include the specific word “collusion” will lead back to Trump. It remains to be seen what that means, but things look bad for the tweeter in chief. As CNN pointed out, we should exercise caution in assuming the charges go directly back to the president. That said, Mueller’s far from finished.

Next: This user had fun with a common Trump catchphrase 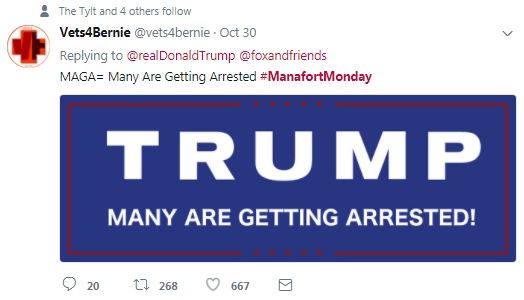 They sure are. This tweeter had a little too much fun with Photoshop. | Vets4Bernie via Twitter

Trump’s “make America great again” catchphrase has made its way around the Internet in both Conservative circles and liberal ones, but in obviously different ways. Did you know Trump didn’t actually coin it? As Mother Jones points out, the idea of American exceptionalism represents an old one that revived in large part during the Barack Obama administration. Just another thing Trump tries to pass off as his own.

Next: This user wrote a catchy little ditty about the indictment. 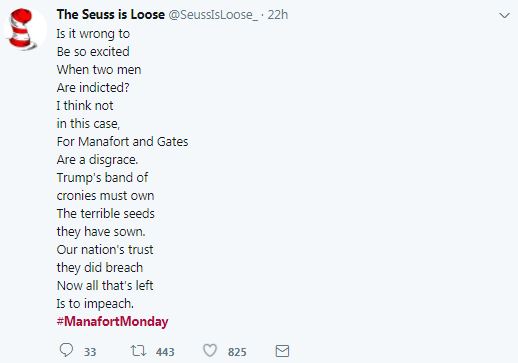 This user got a little Seussical about the situation. | The Seuss is Loose via Twitter

If you thought you couldn’t get an indictment charge stuck in your head, think again. While calling for Trump’s impeachment is certainly not new, it has started to look more likely. According to Slate’s Impeach-o-Meter (yes, that’s a thing) Trump has a 55% chance of getting impeached. Does the indictment edge it closer? Yes, but it’s far from a sure bet. An Irish bookie lists the odds at 7 1/2 after the indictment, and the world keeps placing its bets.

Next: This undercover former official also got literary with the charges.

This user is really James Comey, and he had a few words for his former coworkers. | James Comey via Twitter

Comey has long maintained a secret Twitter account but recently revealed his true identity, CNN Politics unveiled. The former FBI director wrote his senior college thesis on the American theologian Reinhold Niebuhr. One thing is for sure: Donald Trump won’t likely respond to this cerebral take-down. That would require his understanding it.

Next: This outspoken Trump critic made a seasonal observation.

How far could we take this? Pretty far, as it turns out. | George Takei via Twitter

You know it’s stuck in your head. Actor George Takei has been an outspoken critic of Trump’s since the campaign, and regularly tweets harsh criticism. This tweet shows he can have a sense of humor about it all, too. He’s not the only celebrity who criticizes the president on social media, but one of the most persistent.

Next: Pop culture fans will recognize the next character.

9. Rick and Trump have a lot in common, actually 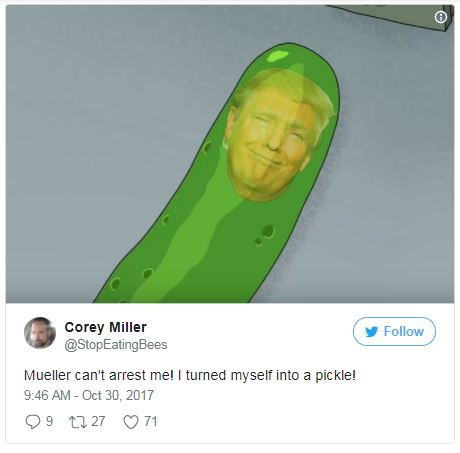 Fans of the Adult Swim show Rick and Morty will recognize the viral sensation that “pickle Rick” became as it kicked off season three of the show. As Nerdist pointed out, “pickle Rick” also represented a departure from Rick’s character’s always being in total control, and went a little deeper, psychologically speaking, than its viewers may have expected. In terms of comparisons, the hard-drinking, cosmically irresponsible Rick and the president have a lot more in common than we’d like to believe. The tweet isn’t just funny, it’s also disturbingly thought-provoking.

Next: This user makes an excellent point

10. Maybe not your best defense, after all

Trump’s tweets tend to come off the cuff, but he might want to think this one through. | Jesse Berney via Twitter

The president’s first tweet argued that Manafort engaged in the vast majority of his illegal activity before Trump hired him. That’s true, but also not the former campaign chairman’s best defense, especially if the president intends to direct attention away from himself. The morning after the indictments came out, Trump got back to tweeting, this time pretending to care more about taxes than Manafort. Deadline reported he wrote, “The Fake News is working overtime. As Paul Manafort’s lawyer said, there was ‘no collusion’ and events mentioned took place long before he … came to the campaign. Few people knew the young, low level volunteer named George, who has already proven to be a liar. Check the DEMS!”

Trump added, “I hope people will start to focus on our Massive Tax Cuts for Business (jobs) and the Middle Class (in addition to Democrat corruption)!”

If Manafort’s lawyer says it, it must be true. Most major news networks likely won’t take the bait, but one might.

Next: All the major media followed the story, except one.

11. But what about the hamburger emoji? 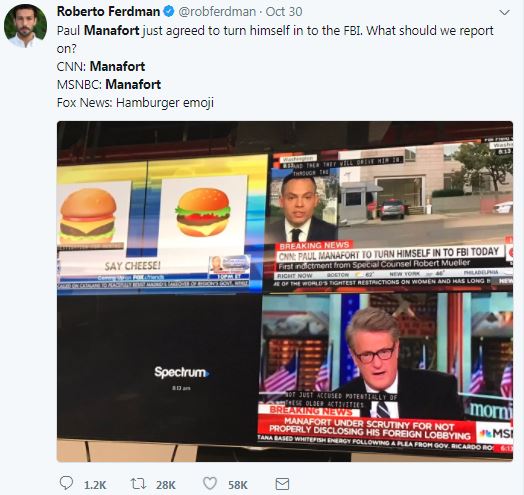 Fox News had its priorities a little off on the morning of Manafort’s indictment. | Roberto Ferdman via Twitter

While the nation turned its attention to the Manafort indictment, Fox News dedicated the last hour of its “Fox and Friends” segment to a “controversial” editorial about the cheeseburger emoji. As Vox reported, Fox News has long leaned right, but since Trump took office, has taken a sharp turn in that direction.

For example, while Trump’s team comes under fire, the network has increasingly focused on Clinton, perhaps at the prompting of Trump’s tweets. Over the weekend, former Trump campaign manager Corey Lewandowski referred to “the Clinton administration,” which as most Americans could tell you, isn’t a thing.

Next: Lewandowski didn’t make the only mention of Clinton as the news broke, however. 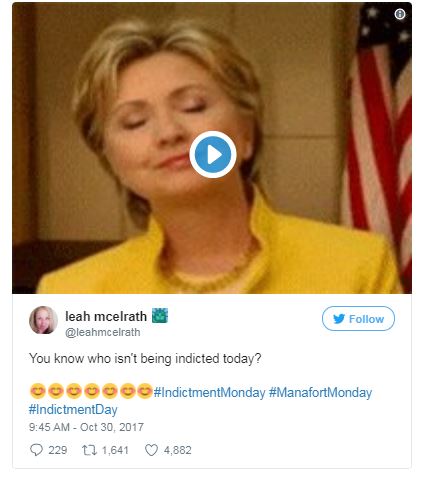 Several Twitter users enjoyed pointing out that it’s not Hillary getting ‘locked up.’ | Leah McElrath via Twitter

Tweets with triumphant gifs of Clinton abounded on Monday. Many pointed out the poetic justice of promised leaked Clinton emails’ bringing down Papadopoulos, and the former secretary of state herself also weighed in.

While on tour for her new book, she said, “We know everything we need to know, we just have to make sure that members of Congress do their jobs and hold the president accountable,” according to CBS News. “I’ll leave it to the investigators to decide whether or not there was collusion or conspiracy, but we don’t need a lengthy investigation to tell us that Trump is ignoring the intelligence community about an urgent threat, refusing to stand up to an adversary who has already attacked us, and abdicating his responsibility to preserve, protect and defend our national security interests,” she added.

Next: A number of other users expressed equal satisfaction when the indictment came out.

This user just said what a lot of us are feeling. | Susan Meister via Twitter

Twitter ran rampant with jubilation, since many Trump critics have waited a long time for the indictment to come out. The psychological effects of Trump’s presidency are very real, however. As clinical psychologist Ruth Wittersgreen told GQ, many of her patients have demonstrated real concerns, and she has herself. “The amount of fear and grief — I haven’t seen anything like it,” she said. The expert compared his presidency’s effect on her patients to the Sept. 11 terrorist attacks or natural disasters like Hurricane Katrina. “But the difference with this, compared to a terrorist attack or a hurricane,” Wittersgreen said, “is the damage seems ongoing. And like it’s going to keep coming.”

A number of therapists have come out with a “citizens’ manifesto” citing their professional concerns about Trump’s presidency. For many, finally seeing some of his associates come under fire must have felt good.

Next: This user made an excellent point about Manafort’s lifestyle.

14. At least his wardrobe will get a lot simpler 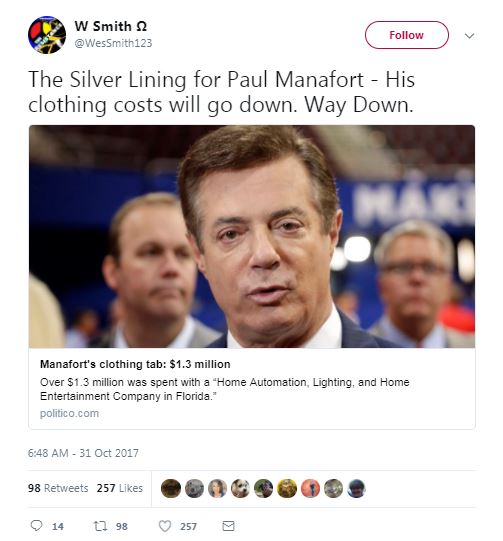 The former campaign chairman allegedly laundered millions of dollars through overseas shell companies — using the money to buy luxury cars, real estate, antique rugs, and expensive clothes. For those of us who have never bought rugs worth more than most houses, Slate took a deep dive into how that works. The good news for Manafort? If he gets convicted, orange jumpsuits cost a lot less than his current threads.

Next: Some users just got the popcorn ready

15. Man, it feels good to be an anti-Trump tweeter 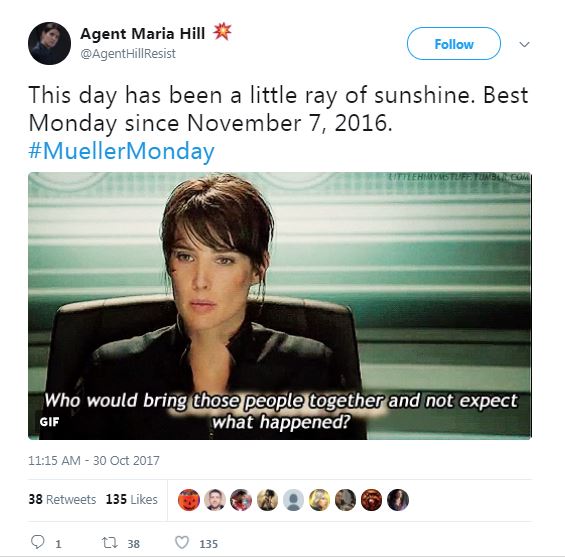 Many users reveled in finally seeing their concerns come to light. | Agent Maria Hill via Twitter

Analysts have said for months that Trump’s claims of “the best people” come, at best, as exaggerations. After the indictment, many of them have doubled down on his ties to Russia and shady dealings, in general. Politico released an interactive chart detailing all of them, and Quartz explained Manafort and Gates, for newcomers to the conversation.

The best tweet of them all though, conflates two of the biggest bombshells to come out that day.

Next: This tweeter wins the internet.

This tweet combines the two biggest news story of the day into one beautiful little package. | Trae Crowder

Some Twitter users really went all the way, comparing Manafort to the “confession” released by Kevin Spacey. Actor Anthony Rapp told Buzzfeed News that Spacey had allegedly made sexual advances on him when Rapp was 14. In the definition of a non-apology, Spacey took to Twitter and said he did not remember the encounter. He blamed intoxication and decided to choose that moment to come out as a gay man. Many fellow celebrities, LGBTQ activists, and social media users leveled harsh criticism on Spacey’s announcement.

Vanity Fair film critic Richard Lawson tweeted “This exposes the gay community to a million tired old criticisms and conspiracies,” adding “How dare you implicate us all in this. Coming out as a gay man is not the same thing as coming out as someone who preyed on a 14-year-old, he wrote. “Conflating those things is disgusting.”

Congratulations, Crowder. You officially found the best way to tweet about Manafort.