One biblical researcher claims the end of the world will begin this week, and his reasoning may surprise you. While the word rapture does not appear in the bible specifically, many Christians believe the second coming of Jesus starts with one. The term refers to the “saved” rising up to heaven, followed by the appearance of the antichrist.

Researcher David Meade calculated the event will begin 33 days of last month’s eclipse. His theory has also been making the rounds on YouTube. Here’s where he gets that idea. 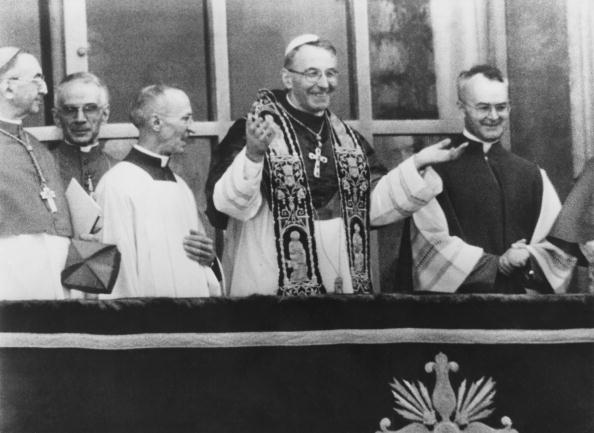 Pope John Paul I’s reign lasted for only 33 days, one of numerologists’ signifiers of the number’s importance. | Keystone/Hulton Archive/Getty Images

Meade told The Washington Post that astronomy and the Bible both play roles in his theory.

According to the blog 33IsEverywhere.com, the number actually holds significance in many religions, as well as geography and freemasonry. The name of God appears 33 times in the book of Genesis, and Jesus reached age 33 before he died. Many Christians call it “the perfect age.” In the book of Revelation, references suggest the end of days will destroy a third, or 33.3% of the world and when Lucifer left heaven, a third of the angels followed. Jesus also performs 33 miracles in the Gospels.

This rapture brought to you by the number 12

An image from one of the videos shows Virgo and Leo passing over Jerusalem. | Youtube, from Unsealed.org

Fox News reported that, for some evangelical Christians, Revelation 12:1–2, describes the beginning of the end.

The passage reads, “And a great sign appeared in heaven: a woman clothed with the sun, with the moon under her feet, and on her head a crown of 12 stars. She was pregnant and was crying out in birth pains and the agony of giving birth.”

The constellation Virgo represents that woman. On Sept. 23, both the sun and the moon pass Virgo, as does the plan Jupiter. Before going into Virgo, the sun appears in Leo, at the same time Mercury, Venus, and Mars also arrive there. This happens once every 12 years in a rare alignment known as “the Lion of the tribe of Judah.”

Author Jonathan Sarfati was quoted in the Express cautioning that the same planetary coincidence previously happened four times in the last millennium.

“As usual with any astrology (or Christian adaptations of it), one cherry-picks the stars that fit the desired conclusion,” he wrote. “There is nothing to suggest that [Sept. 23] is a momentous date for biblical prophecy, and Christians need to be careful about being drawn into such sensationalist claims.”

Some Christian numerologists claim the Gospel of Luke predicted recent events, including the eclipse and Hurricane Harvey. Luke 21: 25-26 reads:

25: There will be signs in the sun, moon and stars. On the earth, nations will be in anguish and perplexity at the roaring and tossing of the sea. People will faint from terror, apprehensive of what is coming on the world, for the heavenly bodies will be shaken
26: Men’s hearts failing them for fear, and for looking after those things which are coming on the earth: for the powers of heaven shall be shaken.

The solar eclipse occurred on August 21, and Hurricane Harvey formed on August 25, and made landfall in Houston on Aug. 26. Some numerologists claim these events serve as precursors to the apocalypse, as well as a planetary event happening the same day.

Is a secret planet passing Earth on Saturday?

The Maya predicted the end of the world on Dec. 12, 2012. These people dressed as aliens in Bugarach village, the only place on Earth which was supposed to be saved. | Patrick Aventurier/Getty Images

Meade claims a secret planet called Nibiru passes the Earth on Saturday, setting a number of global catastrophes into motion. You may remember the name from the ancient Maya prophecy that the world would end on Dec. 21, 2012. That theory obviously proved false, and NASA scientists said it alway was.

The Mayan connection “was a misconception from the very beginning,” said Dr. John Carlson, director of the Center for Archaeoastronomy. “The Maya calendar did not end on Dec. 21, 2012, and there were no Maya prophecies foretelling the end of the world on that date.”

According to a report published by NASA, Nibiru refers to “a supposed planet discovered by the Sumerians … headed toward Earth.” Theorists predicted the catastrophe on May 2003, but when nothing happened, the doomsday date moved forward to December 2012. That linked it to the end of one of the cycles in the ancient Mayan calendar at the winter solstice in 2012. Therefore, doomsday soothsayers came up with the date of Dec. 21, 2012.

Additionally, NASA scientists called Nibiru itself “a hoax. “There is no factual basis for these claims,” the organization stated. “Obviously, it does not exist.”

Some faithful say that Christian numerology is completely ridiculous

Ed Stetzer, a professor and executive director of Wheaton College’s Billy Graham Center for Evangelism, told The Washington Post numerology itself is false. “There’s no such thing as a Christian numerologist. You basically got a made-up expert in a made-up field talking about a made-up event. … It sort of justifies that there’s a special secret number codes in the Bible that nobody believes.”

Meade, despite his work with numbers, said he does not call himself a numerologist specifically. He claims he works in astronomy at a university in Kentucky, but wouldn’t name it “for safety reasons.” His website cites he worked in forensic investigations and spend 10 years working for Fortune 1000 companies. Meade also writes books, the most recent of which is called “Planet X – The 2017 Arrival.”

Stetzer said there’s “no such thing as a Christian numerologist,” in an article he wrote in Christianity Today. “Sure, the writers of Scripture do, indeed, use numbers to point to a few things — that’s first-year seminary. But it stops at first-year seminary because there are not secret numerical codes that require a profession called ‘Christian numerology’,” he explained. He added that Meade doesn’t have any formal training in numerology, anyway.

“Whenever someone tells you they have found a secret number code in the Bible, end the conversation,” Stetzer advised. “Everything else he or she says can be discounted. “Making wild claims and trying to predict the end of the world using numbers and planetary motions as Meade and others have done is the perfect example of what not to do.”

Stetzer lambasted Meade’s interpretation of the Bible for his own purposes. “Meade doesn’t provide us with evidence of any biblical training he has received in order to speak authoritatively about the end times,” he wrote. “He is discussing biblical matters of profound significance and making predictions about events of global importance without any real authority on these topics.”

The Christian Post also questions the theory. “While many conspiracy theorists are banking on this event, many Christians do not buy it simply because the theory is loosely based on actual Bible scripture,” it wrote. Jamie Aten, an evangelical Christian and psychologist at Wheaton College, told The Washington Post the frenzy feels familiar. In 2005, when Katrina barreled toward his community, the pastor said evacuating people “lacked a faith in God.”

As a Christian, Aten believes in the power of prayer. But as a psychologist, he said, he studies the tendency people have to blame natural disasters on the supernatural — “because there’s no one else you can point to.” He said that extreme theories always capture the imagination, even if most Christians – himself included – don’t believe them.

Similar theories predicted the rapture in the past

The end of the world has been predicted before, and none of those have come true either. | Emmanuel Dunand/AFP/Getty Images

Even those who believe in the rapture can’t agree on when or how it’s going to happen. Religioustolerance.org includes a quick rundown of competing theories. It calls the passages describing the end times “ambiguous.”

“The events themselves are open to many interpretations. There is no clear indication of either their timing or sequence. … This leaves the passages open to many conflicting beliefs about the end times. A lot of intra-denominational and inter-denominational strife has resulted from disagreements about end time prophecy.”

Is the rapture coming on Saturday? It’s impossible to tell, but go ahead and make plans for Sunday. Odds are, you’ll probably be around for them.