We all love HGTV’s House Hunters, even if we won’t admit it. Most of us love watching people search for their dream home in an exciting location — despite when those people do and say lots of infuriating things. We all have different taste in home design and decor. But most of us would agree that some home buyers featured on House Hunters are downright obnoxious.

Read on for a list of the most annoying people who grate on your nerves every time they appear on House Hunters.

1. Couples who can’t agree on anything

If you’ve ever gone apartment or house-hunting with your partner, you know that you won’t agree on everything. But some couples who appear on House Hunters can’t agree on anything. One wants to live downtown while the other doesn’t want any neighbors. Or, one wants a Victorian while the other won’t accept anything but mid-century modern.

We may watch in fascination as the real estate agent navigates the uncomfortable process of trying to get them to compromise. But we can’t help but wonder these two would be better off with a therapist, not a real estate agent.

Next: How much stuff do they really own?

2. People who complain about everything being ‘too small’

Not everybody is on board with the tiny house movement. But we think that plenty of people overestimate the amount of space they actually need in a home. You can’t get through an episode of House Hunters without hearing a complaint about a room, a closet, or a home that’s “too small.”

Sometimes, buyers seem correct. But often, you’re left looking at a cavernous master bedroom or a capacious kitchen, and wondering what exactly the buyers expected. (Or how much furniture they actually own.)

Next: Have they ever been to a home improvement store?

3. Buyers who can’t stop talking about the paint or carpeting

No matter where an episode of House Hunters take place, buyers always comment on purely cosmetic aspects of the home. They just can’t get over the paint color in the kitchen, or they’re completely grossed out by the (seemingly clean and new) carpeting in the bedroom.

Has this couple ever been to Home Depot? Are they aware that paint colors are easy to change or that they can change carpeting and install another kind of flooring? Did the producers enlighten them? We didn’t think so.

Next: Why is this person tagging along?

4. People who tag along to look at the houses, but won’t be living there

Not every buyer who appears on House Hunters has a committed significant other. So sometimes they bring a friend or a relative along to look at houses with them. That’s perfectly fine — except that those people are almost always annoying.

They complain about everything. Plus, they don’t think that the buyer should compromise on anything. They think that you should never buy anything other than a new construction home, or they decide that the neighbors are way too close.

Next: Have they ever been in an older home before?

5. Couples who say they want an old home, but complain nonstop when they see one

Some couples tell the House Hunters crew that they want an old home, usually by asking for something with “charm” or “character.” But then, when the real estate agent takes them to see a home that’s more than 10 years old, they just complain nonstop.

The appliances are too old, the floor plan isn’t open enough, and the bathroom looks dated. They don’t love the scratches on the hardwood floors, the staircase has too much wear, and the windows look a little small. Whatever it is, the buyers find something to complain about. We’re always impressed that the real estate agent doesn’t quit on the spot.

Next: What’s wrong with doing a little work?

6. People who insist the home has to be ‘move-in ready’

Not everybody wants a fixer upper, despite the popularity of the HGTV show of the same name. If huge renovations aren’t your style, you might find it refreshing to watch buyers who want a home that won’t need major changes. But people who insist on a “move-in ready” home often get on our nerves quickly. Throwing that requirement around usually functions as a convenient way to dismiss anything that’s not 100% perfect. What are the odds that you’re really going to buy a house in which you wouldn’t change a single thing? Pretty low, if you ask us.

Next: Did they even look at Zillow first?

7. Buyers who seem oblivious to what a house actually costs

Setting the right budget when you’re buying a home is tough. You have to figure out how much you can actually spend. But you also have to do your research to determine what houses really cost in your city.

Too many buyers on House Hunters seem oblivious to what a house actually costs. They end up telling their real estate agent that they want a newly renovated home, ocean views, or lots of bedrooms when none of those things are in the budget. Bonus points? If this is the kind of couple who doesn’t want to compromise on anything.

Next: Do these people have a trust fund?

8. People who have a ridiculous amount of money to spend

On the other end of the spectrum are buyers who seem to have low-paying jobs, but somehow have hundreds of thousands of dollars — or perhaps even a million — to spend on a home. They’re not annoying in the same cringe-inducing way as people who have normal budgets and sky-high expectations. But the often-documented phenomenon perplexes House Hunters viewers everywhere. Who are these people? How did they make so much money? We have so many questions for these (annoying) buyers!

Next: Can they really afford that?

9. Buyers who set a budget — and then ignore it

At the beginning of every House Hunters episode, the buyer or buyers decide on a budget. It doesn’t matter whether you want an urban apartment or a country house. The budget is one of the most important things to keep in mind throughout the entire house-hunting process.

But some buyers quickly lose sight of their budget. They end up purchasing a house that costs significantly more than what they said they could afford. That always has us worrying about their budgeting skills.

Next: When did their wish list get so specific?

10. Couples who have very specific requests about materials or finishing

HGTV could be partly to blame for this trend. But is anyone else annoyed by buyers who have very specific requests for materials and finishes and get disappointed when they don’t see those in every home? Each house doesn’t have to have granite countertops, an apron sink, stainless steel appliances, or subway tile. In fact, most houses don’t have all or any of those things. If these buyers really want something specific, they’ll probably have better luck budgeting to add it after they buy a house instead of expecting every home to conform to their exact specifications.

Next: How much time have they really spent traveling?

11. People who are moving abroad, but don’t seem to know anything about their new country 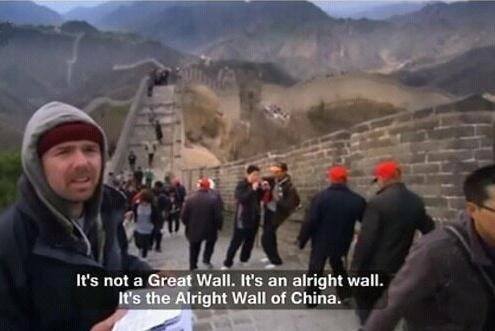 Karl Pilkington from An Idiot Abroad is culturally clueless. | Sky 1

If you watch House Hunters International, then you’ve almost certainly seen a couple who wants to buy a house in a country they’ve only visited once or twice. We don’t fault these people for failing to suddenly become experts on a new culture, city, or language. But we always judge them just a little when we realize that they only have a superficial knowledge of the place they want to live.

These buyers are the ones who want to live along a canal in Amsterdam or can’t live without a view of the Eiffel Tower in Paris. There’s a lot more to both of those cities, and we’re just not confident that these buyers have discovered it yet.

Next: How often do they actually have friends over?

12. Buyers who are preoccupied with entertaining

Many people have their friends over regularly, and some throw cocktail or dinner parties pretty frequently, too. But most people won’t be entertaining every single day. So, House Hunters buyers who obsess over a house’s entertaining potential grate on our nerves. People who are actually good at throwing parties can host a good party anywhere. Complaining that a house’s layout isn’t conducive to entertaining only calls your creativity into question.

Next: Do they even cook?

13. People who demand a professional kitchen

Similarly, some buyers who appear on House Hunters want to see a gourmet kitchen in every home they tour. They may be really talented cooks, but we’re always skeptical. People who truly enjoy cooking — and do it often — benefit from a large kitchen and professional-grade appliances.

But as BuzzFeed hilariously points out, many people who want a gourmet kitchen just seem to want people to think they cook. Plus, we can’t help but wonder if they just want a pretty kitchen to stage Instagram photos on the rare occasion they make a recipe they found on Pinterest.

14. Couples who happily play into stereotypes

We’ll admit, clichés often seem true. But couples who happily play into tired old stereotypes during their 30 minutes of fame on House Hunters annoy us all the same. Does he insist on having a man cave? Does she need a giant closet for her expansive shoe collection? Perhaps he couldn’t care less about what’s in the kitchen, and she doesn’t think she’ll ever spend time in the basement.

We don’t want to box ourselves and our families into gender stereotypes in our daily lives. So why do people keep doing it on the show?

Next: Why do they have to argue about this now?

15. People who argue about what do with a ‘bonus room’

When there’s an extra room in a home, House Hunters has a strange habit of calling it a “bonus room.” You could turn a bonus room into anything, from an office to a guest room to a nursery. But the most annoying buyers on the show take it upon themselves to argue about what to do with the bonus room.

Perhaps he wants a man cave. Maybe she wants a room where she can spread out her craft projects or work on her blog. Whatever the specifics, this couple needs to stop arguing and making things awkward for the real estate agent.

Next: How long will it take them to get to work?

16. Buyers who don’t think about the commute

Location, location, location! The location of your home is just as important as the home itself. But some House Hunters buyers don’t seem to have gotten the memo. Whether they’re touring suburbia looking for the right house or comparing apartments in various neighborhoods of the city, buyers often mention how long it will take them to get to work. Too many times, they end up choosing a 45-minute commute over a 15-minute commute. What are they thinking?!

Next: Really, they chose that house?!

17. People who choose the house they complained about the most

As any House Hunters viewer knows, the buyers typically look at three homes. Then, they have to choose among those three to make an offer on the home. Most of the time, you can tell which one they’ll eliminate first. But other times, you’re in for an infuriating surprise. Every once in a while, the buyers decide to purchase the home that they complained the most about. Sure, HGTV wants a little drama in each episode. But really?!

Read More: 5 Surprising Lies HGTV Told You About Buying a Home These Days