The Most Hilarious Tweets On Trump’s Horrific Christmas Decorations

First lady Melania Trump unveiled the White House Christmas decorations this week and the Internet had a field day. Traditionally, the holiday season has seen the White House decked out in shades of merry and bright. Instead, Trump went for more of a “white Christmas” vibe that had the internet asking, “You ok, girl?” Check out some of the hottest takes below. You will not want to miss the last one. 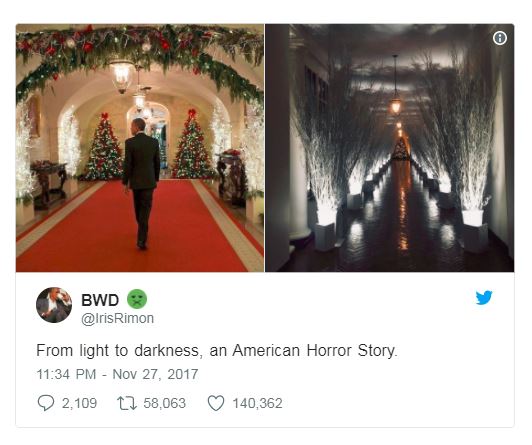 Michelle Obama decorated her White House in scenes of red and gold, but Trump went a little, um, cooler. Think they’re not so different? Peep this video comparing the two.

Next: This user noticed something creepy about those trees. 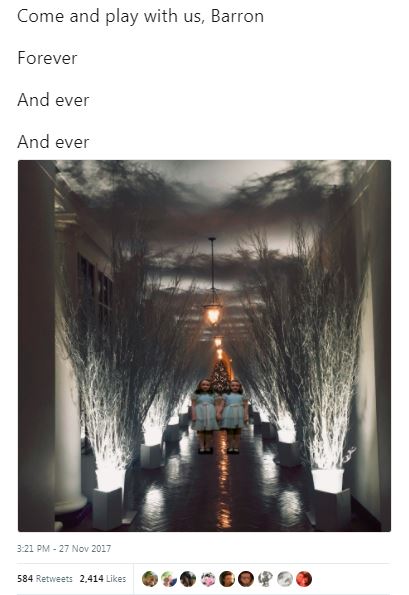 Trump’s Christmas hallway does look like something out of The Shining. That said, we have to get back to you on whether walking through the famous Stanley Kubrick hotel or the White House East Wing makes a creepier experience. Not convinced?

Next: Check out this next scary shot.

3. Visions of sugarplums dancing in hell 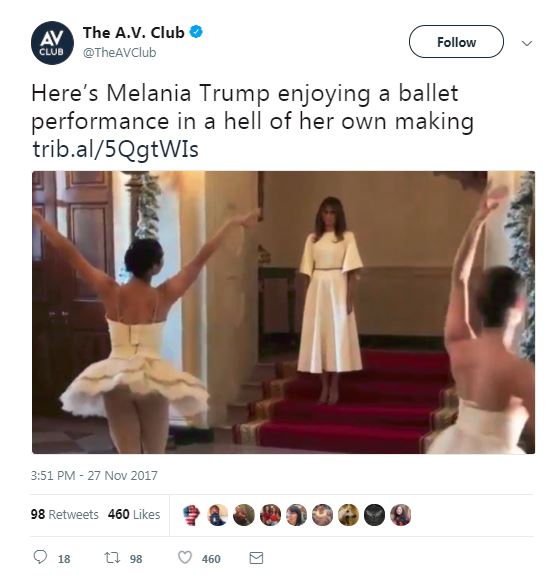 Melania watches ballerinas with her typical joy. | The A.V. Club via Twitter

Trump hired a ballet troupe to welcome the press to the White House, and she looked absolutely delighted to have them there. Let’s be fair: She did smile briefly when greeting her guests. But her face quickly relaxed into its typical frown, and can we blame her? Look where she lives.

Next: She might not be the only Trump in crisis.

4. Did Ivanka and Melania hold some odd competition? 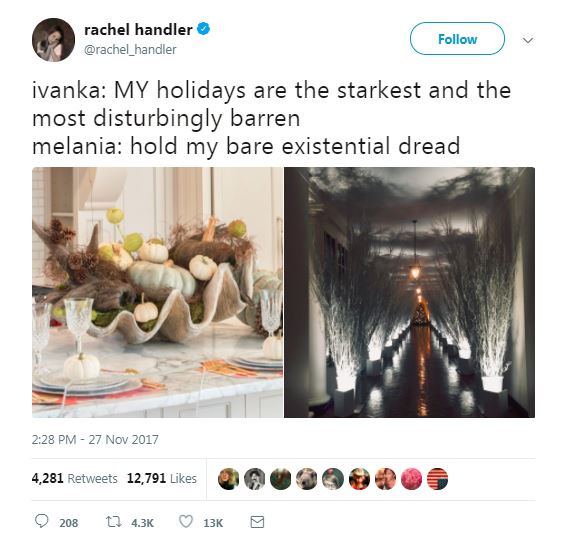 Is it just us, or do the decorations look a little dry?| Rachel Handler via Twitter

In case you got preoccupied with the turkey and, you know, your own family, let us catch you up. Ivanka Trump sent out some insane decorating advice for Thanksgiving and the internet went berserk. Yes, that’s a giant clam shell filled with what looks like the average Midwesterner’s brush pile. No, we don’t know why the Trumps love sticks so much either.

Next: Film comparisons abound, but this one just makes sense. 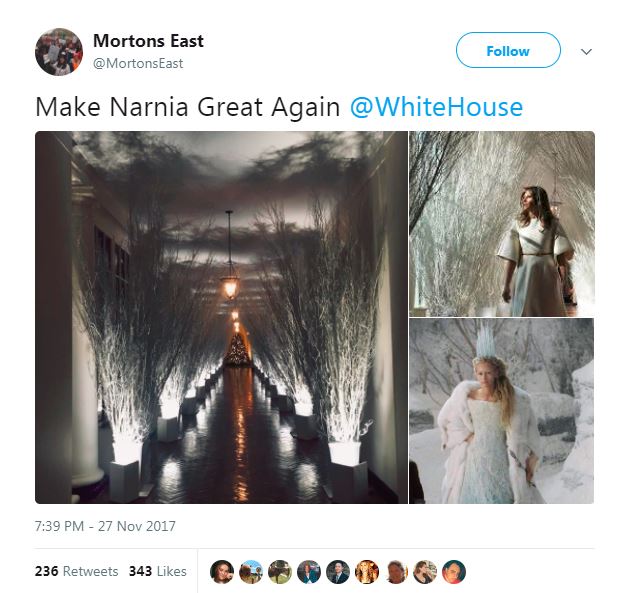 Are you also waiting for Aslan to come out from around a corner? | Twitter via Mortons East

The Chronicles of Narnia alternately enchanted and terrified us all as kids, and the movies finished the job. It looks like Trump also wanted to see what it felt like to live inside the wardrobe, for just one holiday season. We’re cold just looking at her.

Next: We figured out the real theme of Trump’s Christmas display.

6. She does look a bit sad in her stick forest 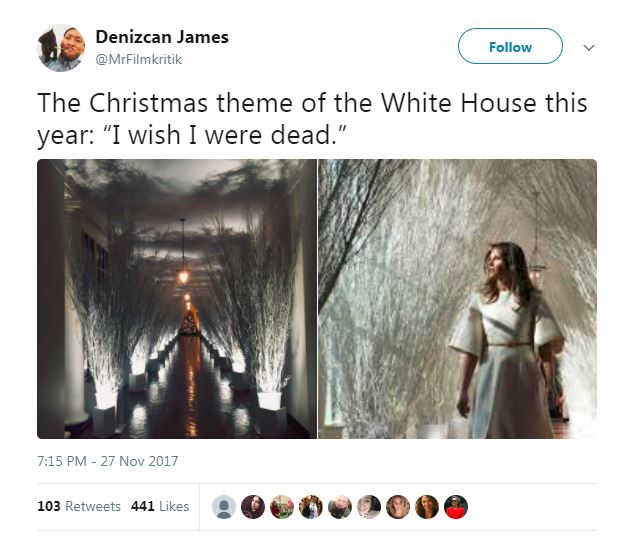 Have you ever seen such a blatant cry for help? | Denizcan James via Twitter

The internet lit up with theories about the Trumps’ relationship even before the inauguration. Therefore, it comes as no surprise that many saw Melania Trump’s Christmas display as a cry for help. Ok, the trees look a little stark. Yes, she brought winter inside. No, it does not inspire hygge. Does that make her unhappy?

Next: We’ll let this next one serve as judge.

7. Does anyone else hear nuclear missiles? 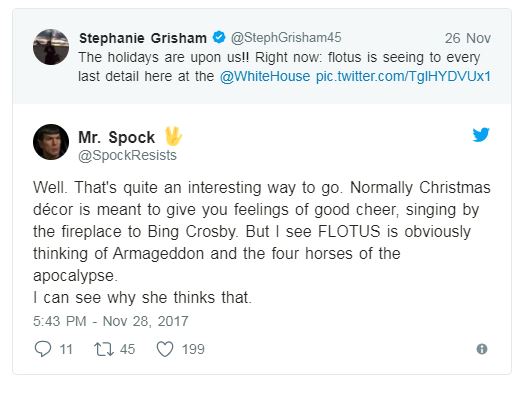 Let’s get real: The holiday this season looks a bit bleak. Members of Trump’s administration resign or get indicted on a weekly basis. North Korea also recently shot a missile that can reach the United States. And despite a loyal base, her husband’s approval ratings hover somewhere between “terrible” and “just flush the toilet already.” We understand why Melania might feel a bit apocalyptic.

Next: The next reference needed no photoshopping to work.

8. We knew the decorations invoked a certain nostalgia 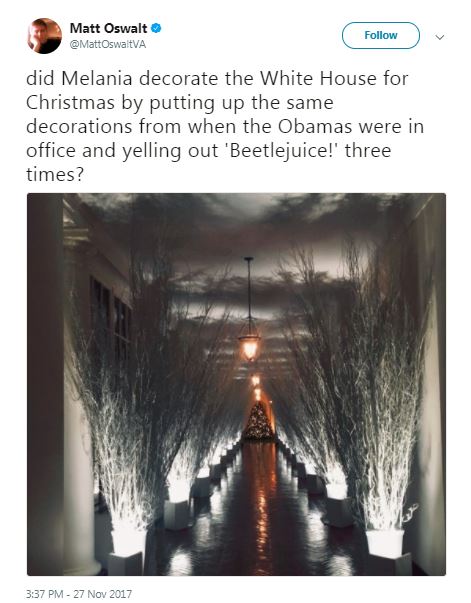 Fans of the 1988 Beetlejuice film will get this reference. Trump’s bleak hallway of horror does look a bit haunted. Maybe she found it inhabited with the ghosts of administration members past. With so many departures, we can understand why the vibe around the White House feels a bit like The Apprentice’s waiting room.

Next: Other tweeters made movie references that also fit pretty perfectly. 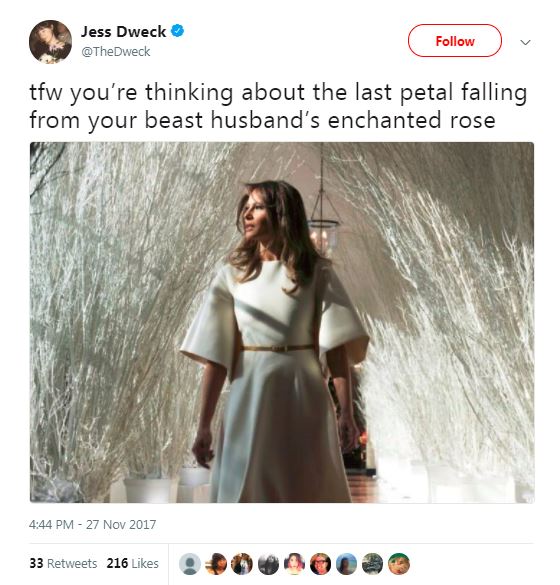 This Disney classic would not do well with children. | Jess Dweck via Twitter

As a former model, Melania Trump knows how to dress for a part. This Beauty and the Beast comparison looks pretty  spot-on from where we’re standing. To literally no one’s surprise, it does not represent the first time someone made that joke.

Next: We could hardly blame Trump for getting a little touchy about her decorations.

10. This inspiration makes so much sense 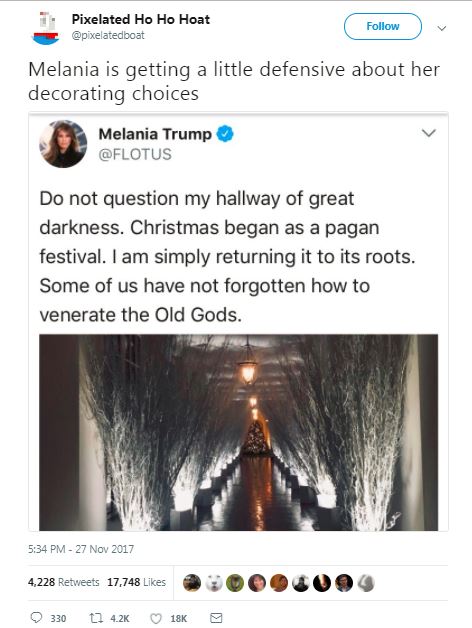 Every year, the first lady chooses a theme for the decorations. This year, Trump chose “Time-Honored Traditions.” Her statement said,  “As with many families across the country, holiday traditions are very important to us. I hope when visiting the People’s House this year, visitors will get a sense of being home for the holidays.” When she said “time-honored,” she apparently meant the beginning of time. We can get behind that. Sure.

11. Hey, we all have our decorating idols 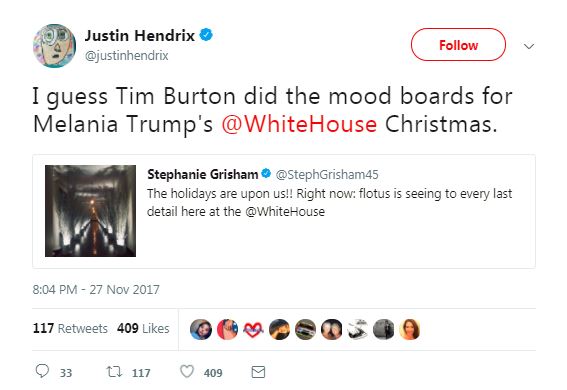 The aesthetic makes so much more sense if we think about it this way. | Justin Hendrix via Twitter.

If we think about Tim Burton’s famous creepy aesthetic, we can get behind this decor. Maybe Trump and Burton got together and whipped up more of a Nightmare Before Christmas vibe than the traditional warm and cozy concept. To be fair, Donald Trump did promise to become a new kind of president. Is this what he meant by #MAGA?

Next: This next concept will give you nightmares.

12. IT did better at the box office than Trump does in polls 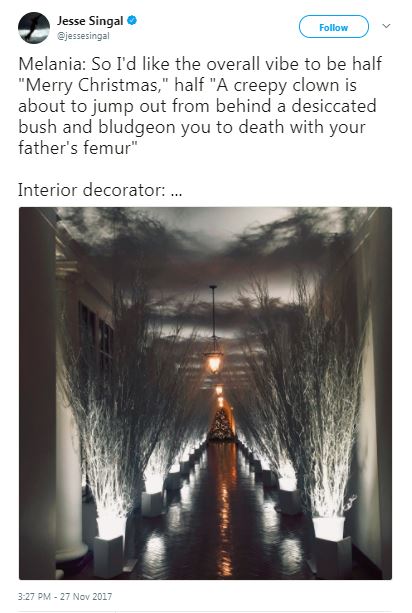 If that doesn’t get inside your brain, we don’t know what will. | Jesse Singal

Some of the internet’s takes on Trump’s decorations got a bit graphic. Horror movie fans, we bet you have those mental images all cued up. Those shadows on the ceiling do look a bit like fingers, now that you mention it.

Next: Speaking of horror movies, this user found another creepy parallel. 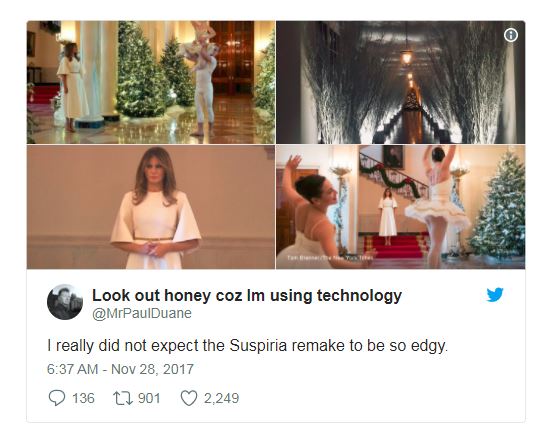 If your Christmas looks scarier than a horror film, you have a problem. | MrPaulDuane via Twitter

Does anyone remember Suspiria? The film follows an American ballet student who transfers to a prestigious dance academy in Germany but later realizes, after a series of grisly murders, that the academy is a front for something sinister. A remake is due out in 2018, but some drew parallels between the 1977 film and Trump’s Christmas.  Actually, the entire administration sort of fits the theme.

Next: This internet star just went all out.

14. When you can’t decide which fits, just go all the way 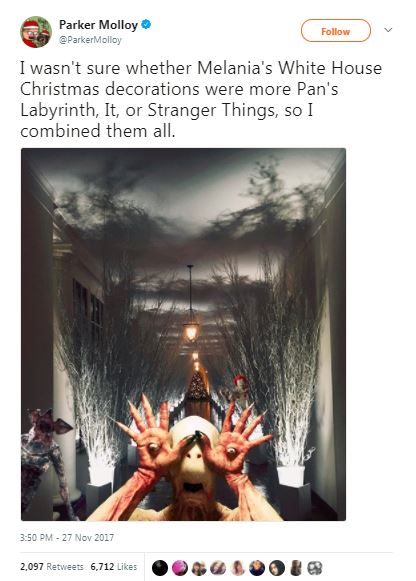 This one just went all out. | Parker Molloy via Twitter

While many users saw horror movie parallels, this internet hero just went all out and threw it all on there together. Sets for Pan’s Labyrinth, IT, and Stranger Things all mashed together for a truly masterful parallel. While this photoshop looks pretty masterful, the last mashup really wins the internet.

Next: Early 2000’s music fans will recognize this one.

15. She’s tired of being what you want her to be

My spouse @meanwhileinoakland asked me what I wanted for my birthday before I go on my trip. I said I only wanted one thing – the Melania Trump Christmas promo set to Linkin Park’s “Numb”.

We dare you not to get this stuck in your head. | Madeline Hart via Instagram

Whether you believe Melania lives in a hellscape of her own making or really wants out of the White House, this mashup is too perfect. Linkin Park’s Numb fits the first lady in so many ways, especially when paired up with her Christmas display. Sorry, Melania. We’re not sorry.