The 15 Most Polluted Cities in the United States

Smog encircles the Los Angeles skyline in 2015. L.A. is one of the most polluted cities in the United States. | Mark Ralston/AFP/Getty Images

Some Americans breathe easier than others. Although overall air quality in the United States has improved in recent years, 4 out of 10 people in the country still live in counties with unhealthy levels of pollution, according to the American Lung Association’s 2017 State of the Air report.

Americans are moving away from coal as an energy source, spending less time behind the wheel, and buying more hybrid and electric cars. So what’s causing the increase in short-term air pollution? Climate change, according to the Lung Association. Droughts, wildfires, increased heat, and other changes in climate all contributed to the rise in unhealthy air days in many cities.

“This report adds to the evidence that the ongoing changes in our climate make it harder to protect human health,” said Harold Wimmer, president and CEO of the American Lung Association.

Climate change isn’t the only thing the Lung Association is worried about. The Clean Air Act of 1970 was instrumental in improving air quality across the U.S., the organization noted. Keeping the law in place is essential to refrain from backsliding in terms of air quality. Some are nervous about President Donald Trump’s promised cuts to the EPA, which enforces the Clean Air Act, and what they could mean for air quality in the U.S.

“As we move into an ever warmer climate, cleaning up these pollutants will become ever more challenging, highlighting the critical importance of protecting the Clean Air Act,” Wimmer said.

While polluted air is a concern across the country, these 15 cities are more likely than others to experience the occasional spikes in pollution the Lung Association is especially worried about.

Alaska might be America’s last great wilderness, but the air in the state’s largest city isn’t always pristine. From 2013 to 2015, the Anchorage metro area experienced a weighted average of eight days a year when levels of short-term particle pollution reached unhealthy levels. Many Alaskans rely on wood-burning devices for heat during long, cold winters, the Lung Association said. And that’s one reason for the spikes in pollution.

Note: The Lung Association ranked cities for short-term pollution by looking at the number of days when the Air Quality Index drifted into the unhealthy range. Days when higher levels of pollution were measured were given a greater weight when determining averages.

The Sacramento skyline is seen from the window of Amtrak’s California Zephyr. | Joe Raedle/Getty Images

Sacramento tied with Anchorage for 14th place in the Lung Association’s list of the cities with the worst short-term particle pollution. The city experienced a weighted average of eight days of alarmingly dirty air per year. Those periodic dips in air quality might not seem like something people need to be worried about, but even brief exposure to high levels of particle pollution can be deadly, according to the American Lung Association. That’s especially true for children and older adults. Sacramento also had the eighth-highest levels of ozone pollution in the U.S.

Montana might be known as Big Sky Country, but that wasn’t enough to keep one of the state’s biggest cities off the Lung Association’s list.

Missoula experienced fewer spikes in short-term particle pollution from 2013 to 2015 than from 2012 to 2014, according to the Lung Association. The improvement was good news. But it still wasn’t enough to knock it out of the list of most polluted cities, with air quality hitting exceptionally bad levels on 8½ days per year, on average. Although the number of days with spikes in short-term pollution was high, the city had zero high ozone days.

Lancaster is known for its large Amish population. But despite the Amish’s reliance on horse-and-buggy transportation, this city still experiences occasional spikes in short-term particle pollution, which occurred nine times per year, according to the Lung Association’s weighted average. Nearby coal-fired power plants are partly to blame for the region’s air quality problems, Lancaster Online reported. Fortunately, the city  experienced 47 fewer high ozone days than it did in 1996. And annual levels of particle pollution are dropping.

The number of unhealthy air days in El Centro has reached a new high, according to he American Lung Association. There were a little more than nine days every year with high levels of short-term particle pollution. The city, which is in the far southern part of the state near the border with Mexico, also had more than 20 high ozone days per year. That’s high. But it’s a big improvement from the mid-’90s, when there were about 125 high ozone days annually.

In 2000, Reno experienced about 2½ days a year with high levels of short-term particle pollution. From 2013 to 2015, the average number of dirty air days had increased by almost 11. Wildfires in the area were one reason for the dip in air quality, according to the Lung Association.

Few will be surprised to see the next city in the top 10 for worst air pollution.

Los Angeles has long had a reputation for dirty, smog-choked air. While the city has made strides in reducing pollution levels in recent decades, problems still remain. The city has the worst ozone pollution in the country, though the average number of unhealthy ozone days per year keeps falling. Short-term particle pollution is also a serious problem in the region, particularly in Los Angeles and Riverside Counties. The ports of Los Angeles and Long Beach generate significant amounts of pollution, while the region’s geography traps dirty air, which residents then breathe in. 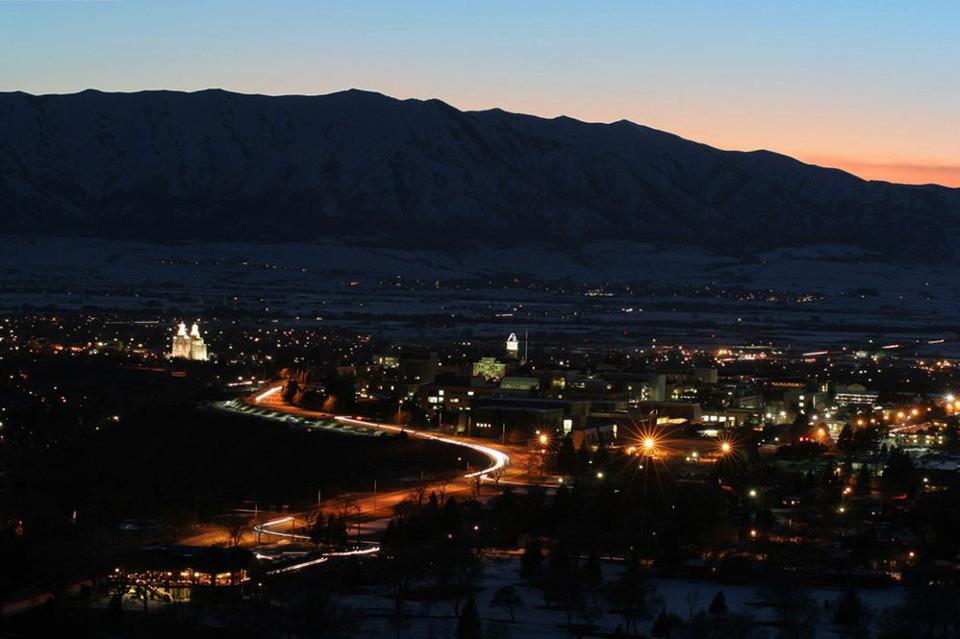 Nighttime view of Logan, Utah | City of Logan via Facebook

Logan, Utah, is one of the smaller cities on the Lung Association’s list, but it has the same dirty air problems as some bigger U.S. metros. Short-term pollution levels were in the unhealthy range for a weighted average of 20 days per year. Reliance on wood-burning sources of heat contributed to some of the spikes in short-term particle pollution, according to the report.

Like Los Angeles, Salt Lake City’s unique geography contributes to its air quality problems. The mountains surrounding the city trap pollution, especially in the winter. From 2013 to 2015, there were more than 20 days per year with serious short-term particle pollution. Local officials are worried about the city’s air problems, in part because the smog turns off tourists.

A customer has her car’s emissions tested at a shop in San Francisco. | Justin Sullivan/Getty Images

The Bay Area cities of San Francisco, San Jose, and Oakland are among the most polluted in the country, according to the American Lung Association. In addition to falling in the top 10 for short-term particle pollution, the region was the fourth-worst in the country for year-round particle pollution and ranked 18th for the number of high ozone days. California’s extreme drought (which eased up this year) and the accompanying wildfires was partly to blame for the region’s high pollution levels.

The four most polluted cities in the U.S. were all in the same state: California.

Modesto, like the other California cities that top this list, is in the San Joaquin valley, a notorious hot spot for air pollution. The area’s geography, combined with drought and wildfires during the years measured, contributed to high levels of soot in the region. Modesto was in the top five cities for both short-term and year-round particle pollution, and it ranked sixth for ozone pollution.

A man carries a case of water from a store to his car in Porterville, California, near Visalia. | Robyn Beck/AFP/Getty Images

As in the rest of the San Joaquin Valley, drought, oil drilling, intense agriculture, and traffic all contribute to dirty air. Short-term particle pollution was high for an average of 40 days per year, the report found, while there were nearly 100 high-ozone days annually. But some of the area’s pollution comes from far away. Ten percent of the region’s ozone pollution comes from outside the state, particularly Asia, research from the University of California has found.

Fresno on a map | iStock.com

The air in Fresno is bad, any way you look at it. The city was in the top three in the country for ozone days, year-round particle pollution, and short-term particle pollution. All that dirty air is causing a lot of health problems.

“Ozone pollution is especially harmful to children, seniors and those with asthma and other lung diseases,” said Dr. Alex Sherriffs, a Fresno area physician and member of the San Joaquin Valley Air District Board and the California Air Resources Board.

Particle pollution also causes problems. “These tiny particles, known as soot, can lodge deep in the lungs and trigger asthma attacks, heart attacks and strokes. They can also cause lung cancer and early death,” Sherriffs added.

When it comes to short-term particle pollution, you can’t get worse than Bakersfield. The city had the highest average number of days with spikes in unhealthy air. It also ranked second for both year-round particle pollution and high ozone days.

Jessica Romero lives in Bakersfield, and her two sons have asthma. “The poor air quality in Bakersfield has had a huge impact on our family,” she said in a news release. “The hardest days are when we have to tell the boys they can’t go outside to ride their bikes or play soccer because of the bad air.”