These days, air travel leaves a lot to be desired. Cramped seats, pricey airfare, and horrifying animal conditions are par for the course. And then, there’s the pesky neighbor who just won’t leave you alone. But what if that neighbor were, say, a bird of prey? Would you consider it a novel experience, or a terrible one?

Despite your personal feelings toward birds, there’s one kind, in particular, that some airlines give first class treatment. Spoiler alert: It’s a falcon. And like it or not, it happens. So, here’s everything you need to know about the unusual custom of flying with your pet bird in tow. 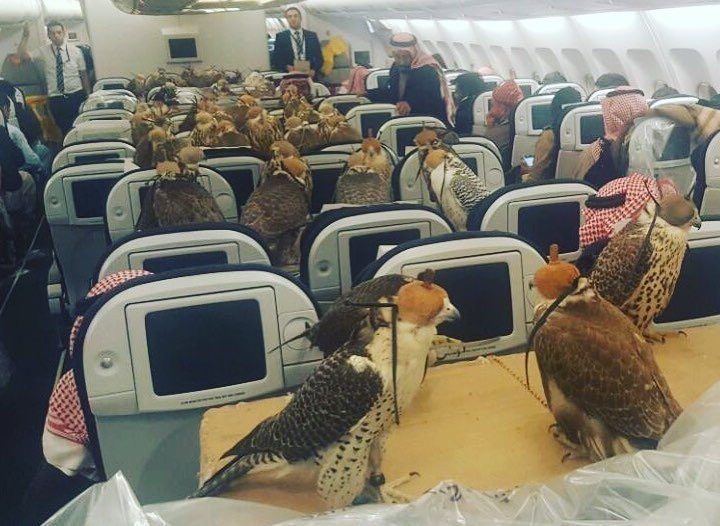 Before we dive much deeper, we’d be remiss not to mention a certain photo that went viral in 2017. In it, a whopping 80 falcons are perched in their own seats on board a flight traveling to Jeddah in Saudi Arabia. According to the BBC, Ahmet Yasar posted the photo on Reddit, and, not surprisingly, the internet just about lost it.

Without a doubt, it was a bizarre sight to see, and it sparked a lot of questions. Basically, the photo nearly broke the internet, and we understand why.

Falcons may fly in their own seats (or with their owners) in any cabin, even first class 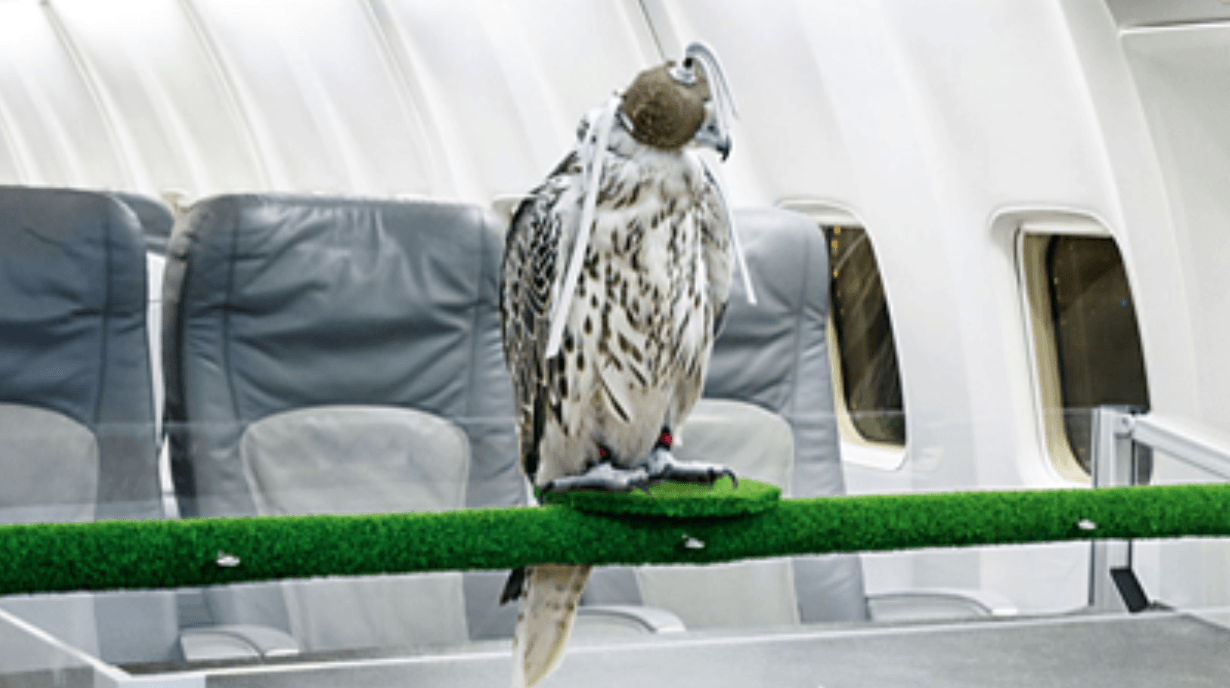 For those of you who aren’t exactly bird-lovers, this is a disturbing bit of information. Like, really disturbing. It is, however, a reality, at least for some airlines (which we’ll get to next). Considering the price of a falcon — anywhere from $500 to $20,000 — it’s clear why anyone would want to keep this expensive pet close by.

According to CNN, “It’s become routine for some falcon owners to have their birds join them, un-caged, aboard flights — no matter if they’re traveling in first class or economy.” So, yeah, a falcon may be flying more luxuriously than you ever will.

Next: Who would allow it?

Most middle eastern airlines allow it 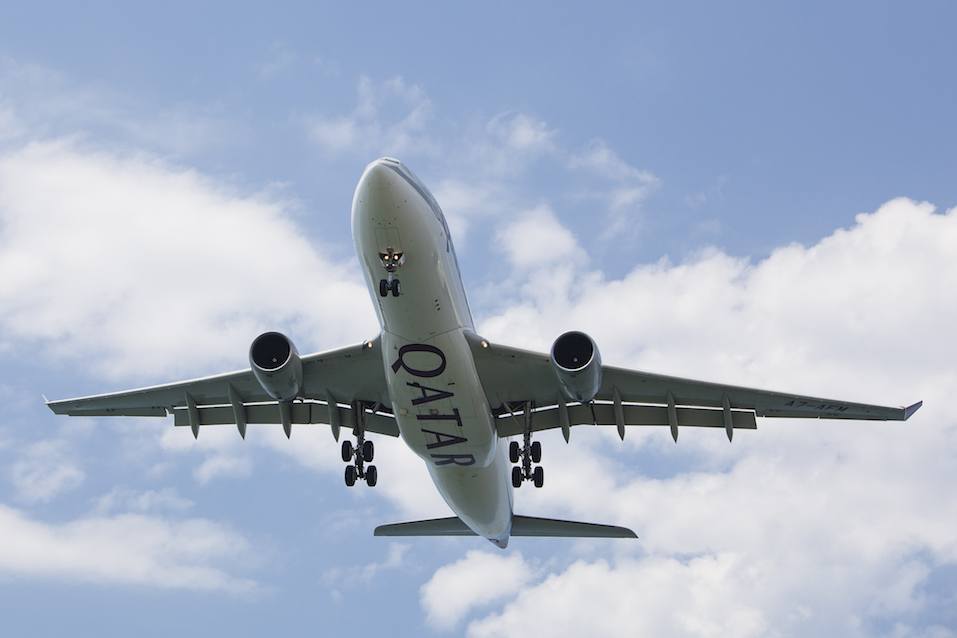 Apparently, the practice of flying with your falcon in tow is quite common for some airlines. That’s because these birds are used for hunting, a time-honored tradition within many middle eastern cultures. Here are a few of the airlines offering no-fuss falcon-flying:

Next: Falcons require documentation, too.

The birds need their own passports 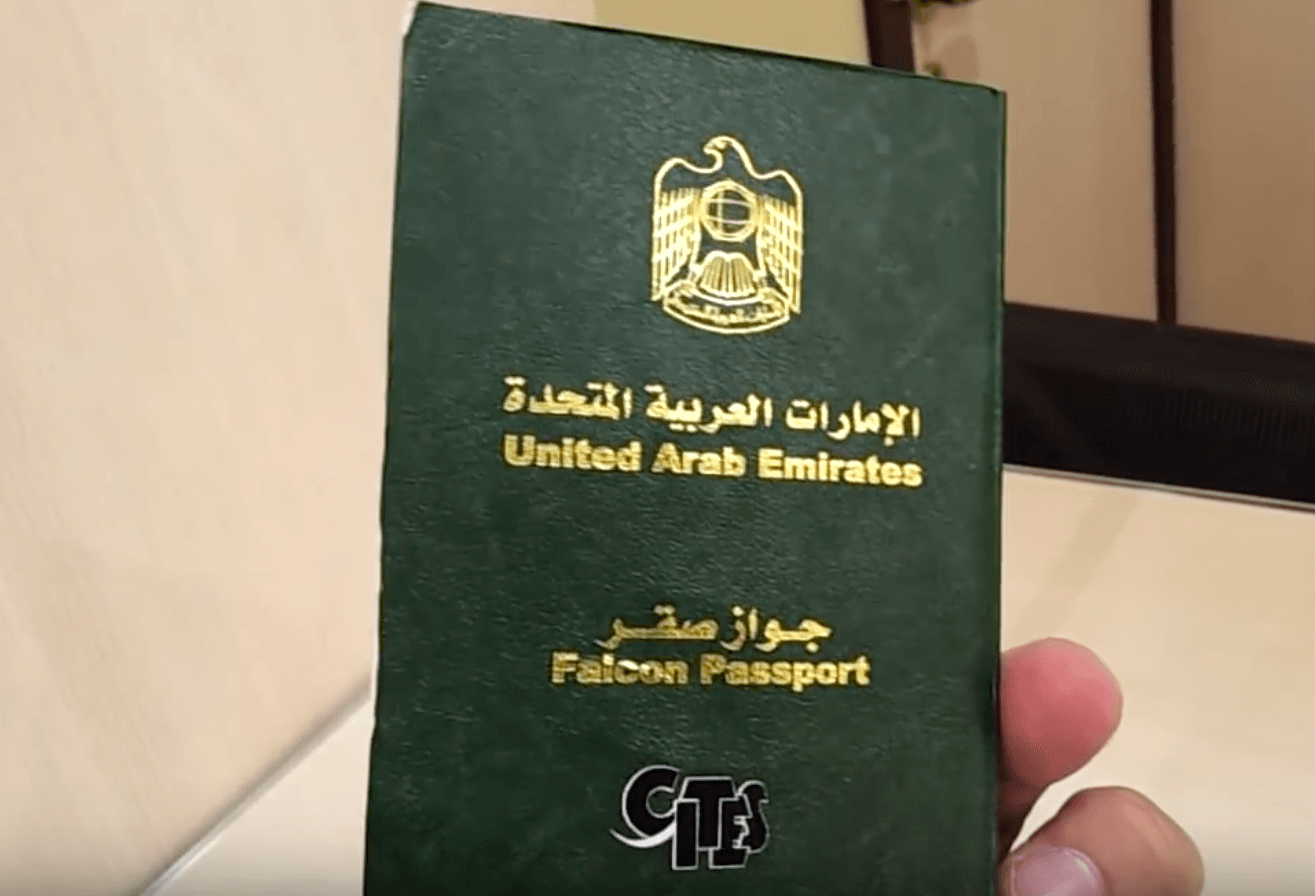 Yes, even birds of prey are required to travel with passports. Silly as it may sound, though, it actually makes sense. According to CNN,

In the United Arab Emirates, the birds are required to have their own passports, issued by the Ministry of Environment and Water, to combat smuggling of the birds. The document is valid for three years and costs about $130.

The publication also reports that more than 28,000 falcon passports were issued between 2002 and 2013.

Next: These expensive birds come with a price. 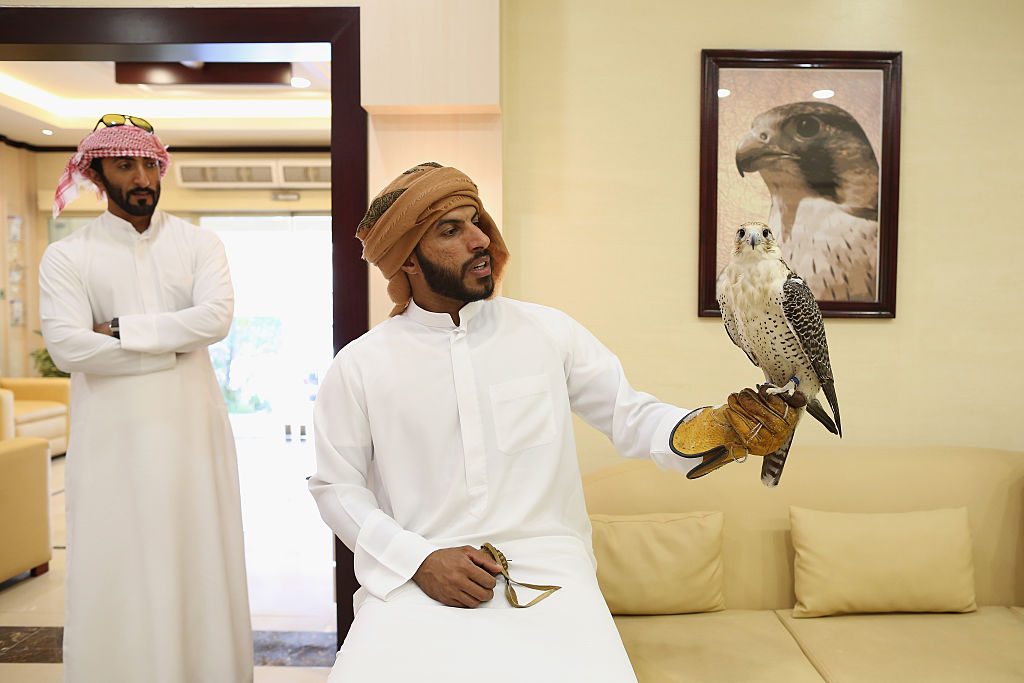 Would you be willing to pay upwards of $1,620 to fly your falcon (yes, we understand the irony, here)? Because that’s what it could cost Qatar passengers. Royal Jordanian passengers, on the other hand, are required to cough up three times the excess baggage rate per falcon. But again, falcons aren’t cheap, and their handlers are willing to pay the price.

Next: Here’s why this custom is actually quite common.

Falcons are a status symbol 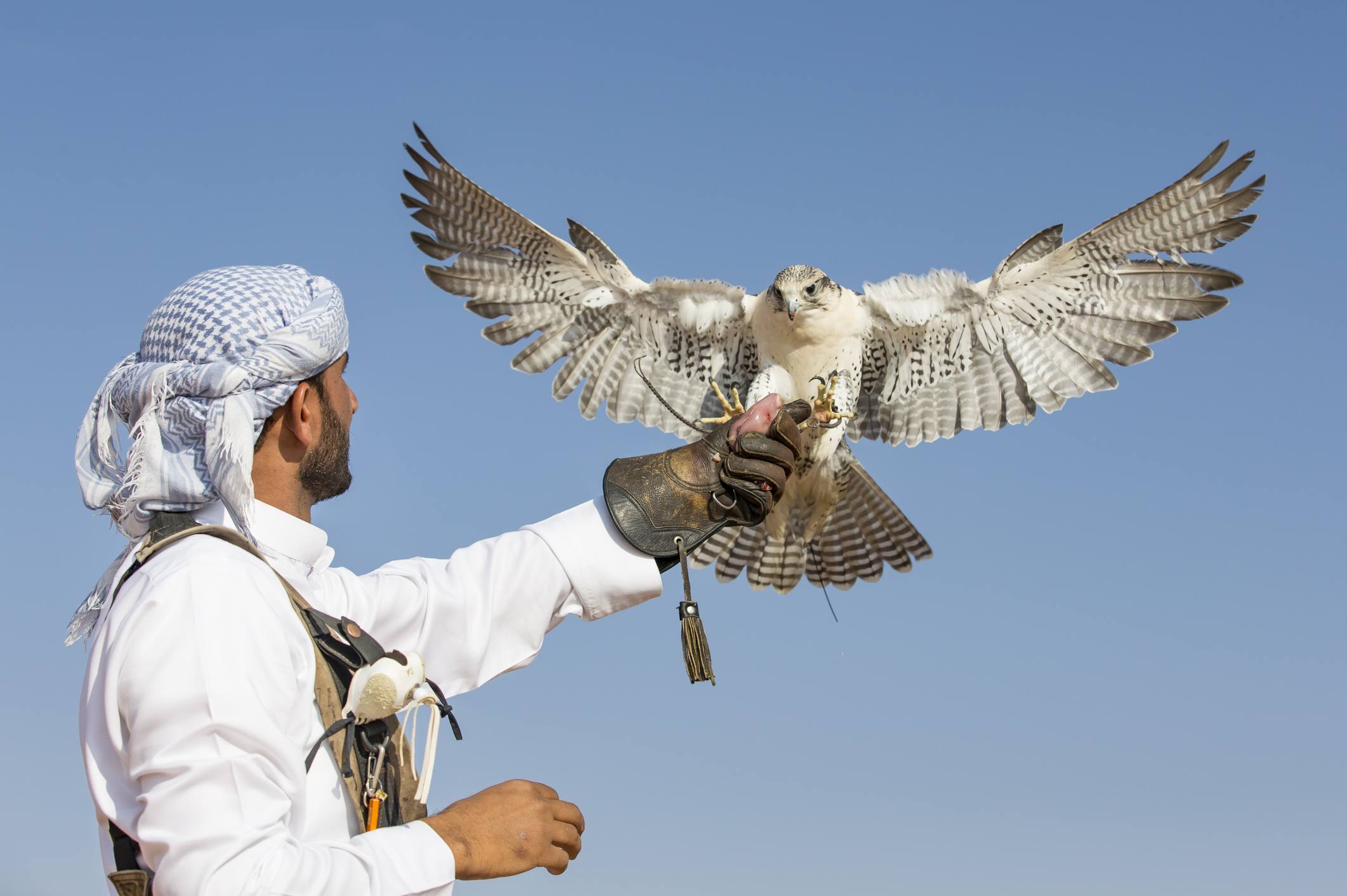 Dating back hundreds of centuries, falconry is the sport of hunting with falcons. Crazy, we know. But it’s a significant part of the Middle East’s culture. So significant, in fact, that UNESCO added it to the Intangible Cultural Heritage of Humanity list, CNN reports.

Furthermore, falcons really are a status symbol. While they’re used more for sport than hunting food at this point, a falcon and its handler form a bond akin to that of any other pet and his owner.

Next: Falcons may start freaking out when the time comes.

The birds are usually calm — until landing 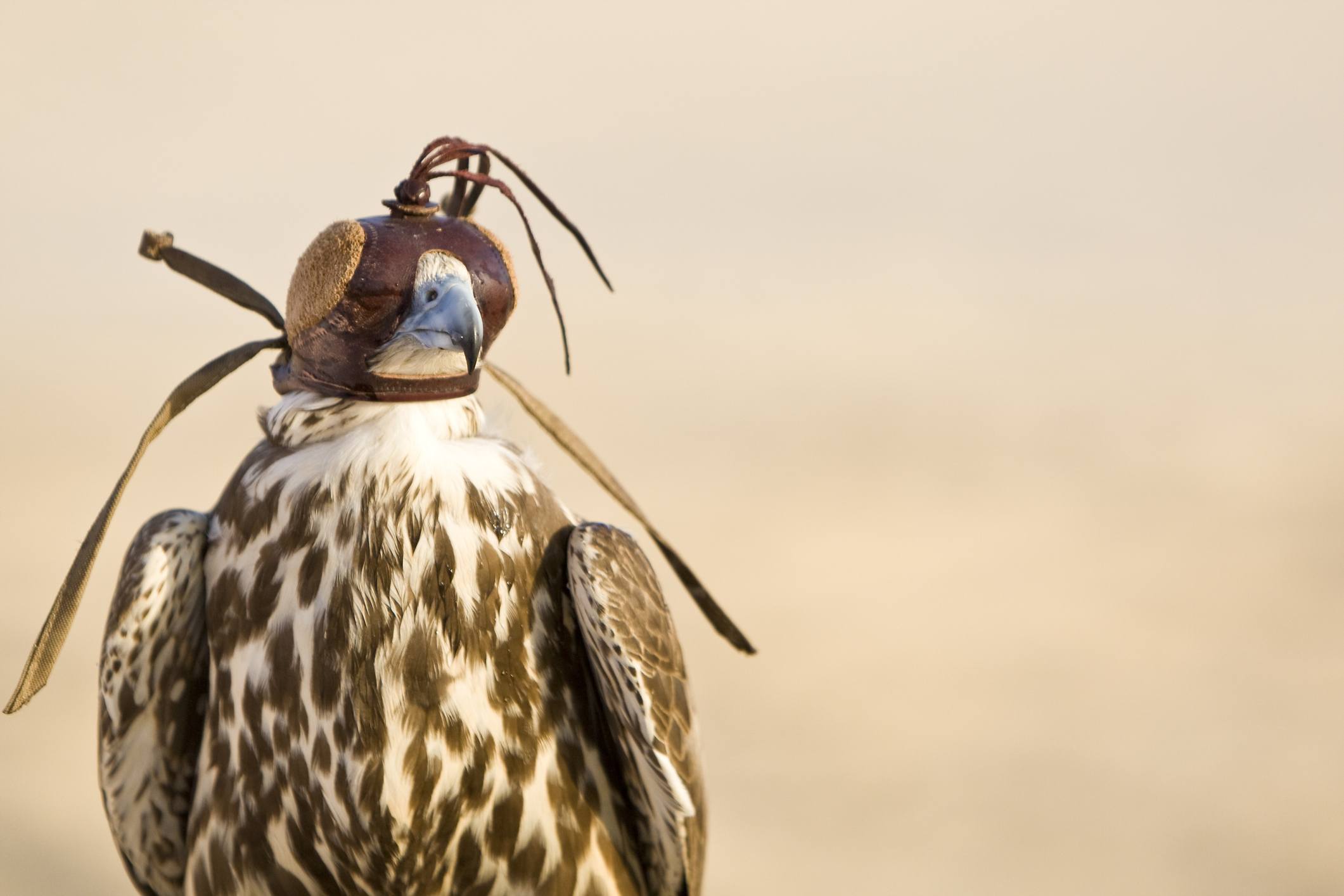 Hooded Falcon In The Desert of Arabia | dmbaker/iStock/Getty Images

When falcons are transported, they typically have hoods to cover their eyes. You know, because they’re natural and trained hunters. And no one wants to see one leap into action in the confines of an airplane cabin. There is, however, one portion of the flight during which a falcon may instinctively react.

Apparently, they tend to flap their wings upon landing. But hey, if that’s the worst of it, flying next to a status symbol like a super fast falcon doesn’t sound so bad.