The Guinness world record holder for ‘Tallest Dog‘ goes to Freddy the Great Dane. Freddy lives with his mom, Claire Stoneman, in Leigh-on-Sea, Essex. Being the tallest dog in the world, Freddy has to do things a little differently. From sleeping on a human bed because dog beds and sofas are too small, to getting stopped on their walks every five seconds by shocked pedestrians, let’s take a look at how Freddy lives as the world’s tallest dog and his most adorable photos.

Freddy used to be smaller than his siblings. | Freddy the Great Dane via Instagram

Believe it or not, Freddy was actually the runt of the litter. His owner, Claire Stoneman, even brought home one of Freddy’s sisters because he was so small and helpless, and she thought he could use the company. Stoneman told Holly and Phillip, the hosts of This Morning, that Freddy didn’t have his growth spurts until a little later than normal, but once he started growing he just took off.

Next: Freddy is bigger than the average NBA player!

2. Today, Freddy is bigger than your average NBA player Next: Here’s what Freddy looks like standing up next to a mere human. 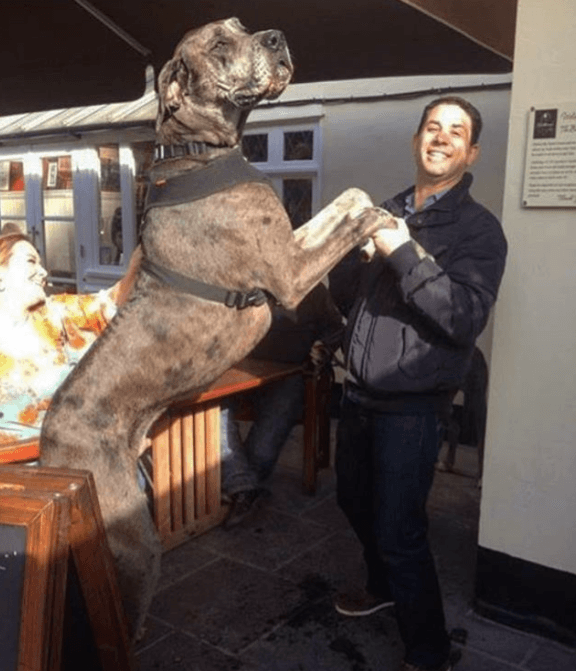 Freddy stands up to greet the host | Freddy via Instagram

Freddy is absolutely huge when stands up. This picture occured when a Brazilan news team came to film Freddy. He’s standing up with the host of the show.

Next: Here’s what happens when Freddy goes out in public.

4. They can’t go out in public without people staring or asking questions It’s hard to blame people for staring. | Freddy the Great Dane via Instagram

“If we go out in the daytime we get interrupted every five seconds,” Stoneman tells the BBC. “Cars brake and stop to look at him.”

When Holly and Phillip asked Stoneman about taking Freddy on walks, she said people are always shocked to see a dog of Freddy’s size casually walking down the street. She said people give them funny looks or stop to pet him and ask questions.

Next: Freddy is a giant in the kitchen! He has to eat to keep up his strength. | Freddy the Great Dane via Instagram

With a dog that big, you have to wonder what Stoneman’s been feeding Freddy. The answer is: a lot. Stoneman says she spends about $125 a week feeding Freddy. Every day he has 1kg of minced beef, 250 grams of casserole steak and about 300 grams of liver. Peanut butter on toast and roasted chicken are also a couple of Freddy’s favorite meals.

Next: Freddy goes through sofas like they’re chew toys. Sofas are one of his favorite chew toys. | Freddy the Great Dane via Instagram

From the time Freddy and his sister Fleur were young, they enjoyed gnawing on sofas. It’s a habit they never broke because, as of today, Stoneman has gone through 26. When Phillip from This Morning asked if Stoneman had to start regularly visiting thrift stores in search for new furniture, she said she usually relies on an online auction site whenever she’s in need of a new sofa — it’s become routine.

Next: Funny things other dogs do to try to get to Freddy’s level.

7. Other dogs have to stand on chairs to meet him eye to eye Other dogs have to stand on chairs if they want to meet Freddy eye to eye. His sister is pictured above on the green chair, and still doesn’t quite stack up to Freddy’s level.

Next: Freddy looks like he could easily step over the fence.

8. Sometimes Freddy gets on chairs, too Freddy likes to get on chairs and become even taller. Though, when he does this, it looks like he can easily step over a backyard fence.

Next: The changes made around the house to accommodate Freddy.

9. Claire has adjusted her life to live with the world’s tallest dog She lives with not one, but two, Great Danes. | Freddy the Great Dane via Instagram

Stoneman has made some major adjustments in her life in order to keep the world’s tallest dog happy and healthy. For one, she moved her bed downstairs so she can sleep with him (a dog bed is too small, as are the sofas he chews up). She also has cameras set up all over the house so she can keep an eye on her dogs while she’s at work. Additionally, she receives alerts on her phone if anything suspicious is happening at home.

Next: Here’s what the typical day looks like for Freddy.

10. How Freddy spends his days If he’s not appearing on TV, he’s probably sleeping. | Freddy the Great Dane via Instagram

Though Freddy looks big and strong, he’s not a very active dog. Stoneman told Holly and Phillip that he likes to nap or rest about 20 hours a day. He’ll run around a little bit, and he’ll enjoy his walks but, all in all, Freddy prefers lying around the house.

If you want to keep up with Freddy, the tallest dog in the world, and see how he spends his days first-hand, you can follow him on Instagram.