These Are the 15 Healthiest Dog Breeds

Like people, our canine companions are likely to experience some health problem over the course of their lifetime. But some breeds are less susceptible to health issues than others.

Purebreds are a lot more likely to suffer from serious health complications than mixed breed dogs, while certain combinations of breeds could be vulnerable to genetic conditions. And not all purebreds are likely to get sick all the time.

On average, big dogs live shorter life spans than small ones. Let’s take a quick look at which dogs are likely to stay healthy throughout their lives, including a dog so busy he doesn’t have time to get sick (No. 10).

This cute pup has a low percentage of health concerns. Only about 10% of Airedale Terriers are dysplastic (which means abnormal hip development), while other breeds have dysplasia rates as high as 70%.

Originally from England, the Airedale Terrier was used to hunt and defend their homes. They were also called upon to deliver messages and sniff out wounded soldiers during both World Wars.

Next: This small breed won’t get sick too often.

This small breed can live up to 18 years with the proper love and care, and he doesn’t suffer from any major health conditions, either. His small stature also means he won’t need much exercise, making him a great choice for city or apartment dwellers.

Next: There aren’t too many issues with this breed.

While some members of this breed suffer minor eye problems, overall the Springer Spaniel has very few common genetic diseases and can live up to 14 years.

Next: Athletic and healthy, this next breed has a long lifespan.

There aren’t any major health problems common to this muscular, athletic breed. The life expectancy of a German Pinscher is as long as 14 years. Thanks to his good genes, those years aren’t likely to be spent in the vet’s office.

Next: This dog is happy and loving. 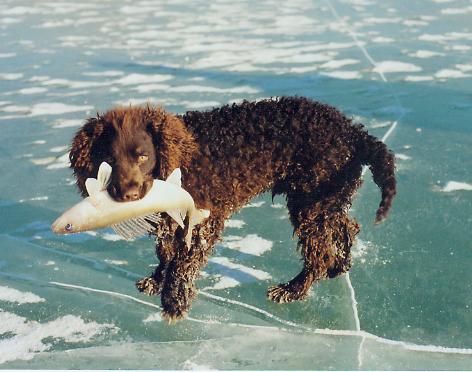 Wisconsin’s own state breed, a combination of the Irish and English Water Spaniel, this dog thrives in any type of climate. Happy, energetic, and loving, the Water Spaniel is likely to live a long and disease-free life.

Next: A scrappy pup who won’t get sick.

Scottish farmers bred this breed to naturally abolish pests that were plaguing their land. Scrappy and hardy, the Cairn terrier is a small but mighty breed that isn’t likely to develop any serious health complications over the course of his life.

Next: He’s healthy as a whip.

Who can resist that face? Originally bred from Greyhounds and other racehorses, Whippets are strong and athletic, with a life expectancy of 12 to 15 years and little chance of illness during that time. Just be sure to keep this lean breed warm, since their lack of body fat means they get cold easily.

Next: He’ll work hard and won’t get sick.

These hard-working dogs are less likely to get sick than many other breeds. Bred to herd cattle in inhospitable conditions, these intelligent animals face a slightly heightened risk of deafness and dysplasia, but overall they’re incredibly healthy over the course of their lifetime. In fact, the longest living dog ever was an ACD named Bluey, and he lived to be 29 years old!

Next: A devoted companion who will live for a long time.

This high-energy dog boasts a life expectancy of up to 14 years, making him the ultimate devoted companion for your families with kids or anyone who doesn’t mind giving him tons of exercise. Advanced DNA testing has helped to eliminate many of the genetic conditions that used to plague Border collies.

Next: This strong breed won’t need any vet visits besides regular checkups.

This breed is one of the most versatile of the working dogs, so he just doesn’t have time to get sick. His track record proves that he’s one of the healthiest — and hardest working — breeds you can get.

Next: A family pet who doesn’t get sick.

They may howl a lot, but it’s not because they’re in pain. Family-friendly Beagles are immune to most of the major health problems that plague other breeds, like hip dysplasia and heart disease.

Next: Don’t let the looks of this dog fool you.

They may look dainty, but poodles of all sizes are actually hearty, healthy dogs that aren’t likely to contract many of the common canine diseases, such as bladder stones, epilepsy, and degenerative myelopathy.

Next: A tough and active breed that will turn heads.

They look like close cousins of foxes and they’re also quite healthy. This tough and active breed doesn’t fall victim to many hereditary health problems and has a decently long and disease-free life expectancy.

Next: Give this breed plenty of exercise and he’ll stay healthy.

You won’t have to worry about hereditary issues with these dogs.| Rauluminate/iStock/Getty Images

It’s rare that this beautiful breed suffers from any hereditary health conditions, like heart disease or epilepsy. Just give this graceful guy plenty of room to run and he’ll be a healthy, happy family pet for many years to come.

Next: They’re hypoallergenic and easy to care for.

They are prone to allergies, but when it comes to common health issues, the Bichon Frise has very few. Playful, curious, and great for people who suffer from allergies, this breed lives as long as 15 years and won’t have to visit the vet very often.