These Are the Biggest Food Failures McDonald’s Ever Made

Everyone knows about Big Macs and Chicken McNuggets. But what about Hula Burgers, McHotDogs, and McPizza? Over its more than 75-year history, McDonald’s has introduced plenty of menu items that have changed the way Americans eat (for better or for worse).

But for every hit, there’s been an equally spectacular dud. We’ve rounded up 15 of the McDonald’s biggest food failures. How many of these do you remember?

The Cheddar Melt was one of McDonald’s numerous unsuccessful attempts to make its kid-friendly menu more appealing to discerning adult palates. The sandwich, introduced in the late ‘80s, featured a ¼-pound beef patty and was topped with grilled onions and served on a toasted rye bun. It hung around into the ‘90s and came back a couple of times since for limited-edition runs. Though it was never a runaway hit, the burger has some dedicated fans, and some have even figured out how to make a copycat version at home. 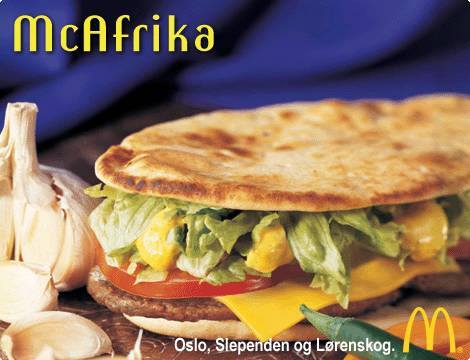 We can only assume the person who came up with this ill-thought-out menu item was soon looking for another job. The definition of a “what were they thinking?” product, the McAfrika popped up at McDonald’s restaurants in Norway in 2002. The beef, cheese, lettuce, and tomato combo was served on pita-style bread and was supposedly based on an African recipe. Unfortunately, no one at the Golden Arches realized that a famine was ravaging southern Africa at the time. McDonald’s quickly pulled the insensitive sandwich from the menu.

Next: The Hula Burger 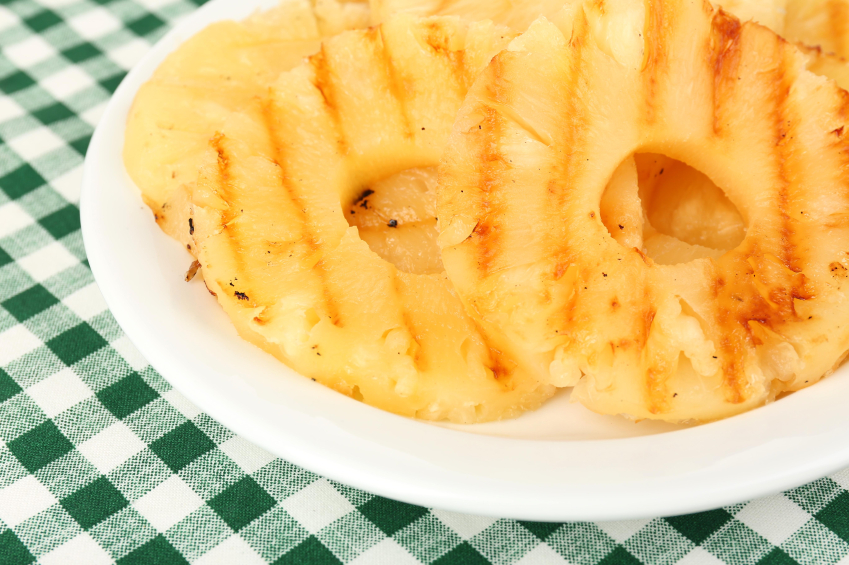 Back in the 1960s, McDonald’s had a dilemma: Catholic diners weren’t visiting the burger joint on Fridays, when most of them traditionally ate fish instead of meat. Enter the Hula Burger — the brainchild of CEO Ray Kroc. It involved a slice of pineapple, topped with cheese, and served on a bun.

Kroc was sure his quirky sandwich was a winner, but around the same time, one franchise location cooked up the Filet-o-Fish. The restaurant put both items on the menu at select locations on Good Friday in 1962 and decided whichever sold more would become a permanent menu addition. The Filet-o-Fish trounced the Hula Burger, 350 to 6, according to Smithsonian. 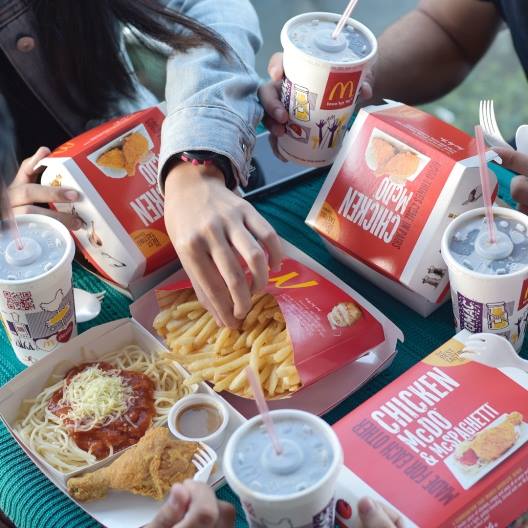 McSpaghetti served with chicken at a McDonald’s in the Philippines. | McDonald’s via Facebook

In the 1980s, McDonald’s was trying to get more people to visit its restaurants for dinner. To do that, the chain branched out from burgers and fries into Italian food. Unsurprisingly, most people took one look at McSpaghetti and said, “no thanks.” But McSpaghetti didn’t disappear completely. The dish is still on the menu in the Philippines. The world’s largest McDonald’s in Orlando also serves up customizable pasta entrées.

Next: The McLean Deluxe

Low-fat eating was trendy in the 1990s, and McDonald’s decided to appeal to health-conscious diners with the McLean Deluxe. The 91% fat-free “healthy” burger cost $50 million to develop and got a massive marketing push in 1991. But once consumers discovered that the chain had added carrageen, or seaweed extract, to the patty to replace the lost fat, the response was a resounding “ewww.” It was discontinued in 1996.

Michael Jordan was probably the most famous athlete in the world in the early 1990s, so is it any surprise that there was a McDonald’s menu item named after him? The McJordan Special was only available in select markets in the Midwest and included a beef patty, barbecue sauce, and bacon. An identical burger, the Big 33, was named in honor Larry Bird and sold in other parts of the country.

The burger is long gone from the McDonald’s menu, but it still has fans. Someone paid nearly $10,000 for an unopened jug of McJordan BBQ sauce in 2012.

Everything in America was red, white, and blue in 1976, the year of the country’s bicentennial. The patriotic color scheme extended to McDonald’s shakes. In honor of America’s 200th birthday, McDonald’s served up red, white, and blue milkshakes. The first two flavors, strawberry and vanilla, are still around, but the blue shake, which was blueberry flavored, was a short-lived specialty. 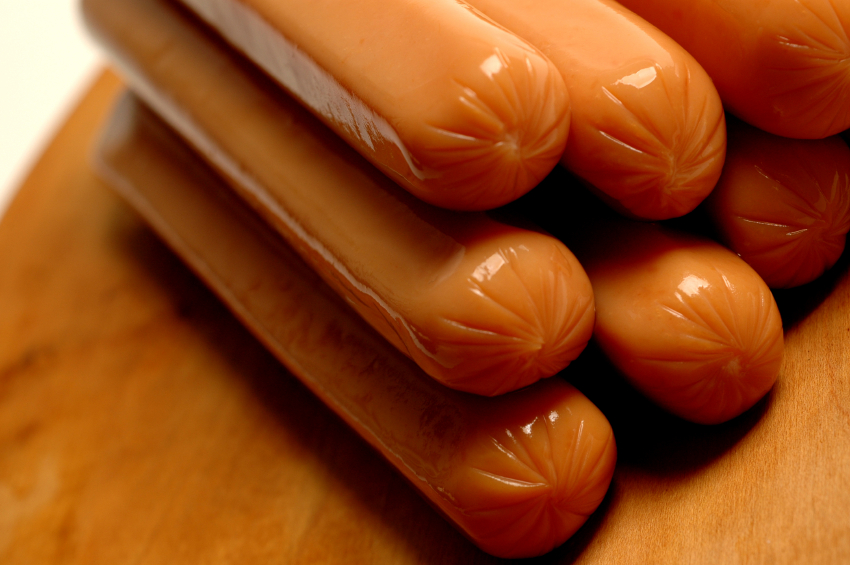 Ray Kroc didn’t like hot dogs and flatly refused to serve them at McDonald’s. (“There’s no telling what’s inside a hot dog’s skin,” he wrote in his autobiography.) But after Kroc was gone, McDonald’s toyed with the idea of adding the sausages to its menu. Hot dogs have been sold at McDonald’s in the U.S., Canada, the U.K., and Japan over the years, but they’ve never been a permanent, regular menu item. If you really want a fast food hot dog, you’re going to have to head to Wienerschnitzel. 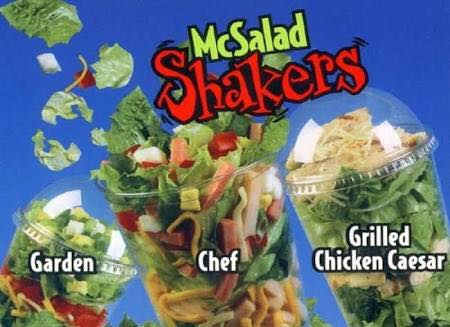 The McSalad Shakers sounded like a good idea: A salad served in a plastic cup with a lid, so you could shake to evenly coat your lettuce with Italian vinaigrette or Ranch. Plus, the cup shape made them easier to eat in your car. But like McDonald’s other attempts to make healthier food exciting, this early 2000s offering mostly flopped.

With a goofy name like McStuffins, is it any wonder that this Hot Pockets rip-off got a cold reception? Test-marketed in select areas in 1993, these pocket sandwiches consisted of French bread filled with ingredients like pepperoni and teriyaki chicken. Consumers apparently turned up their noses at the snacks, more proof that McDonald’s is on shaky ground whenever it ventures beyond its burger-and-fries comfort zone.

Oh, how the mighty have fallen. In 2013, McDonald’s execs realized that Americans were flocking to joints like Buffalo Wild Wings and Wing Street to chow down on hot wings. In response, they rolled out their own version of the popular bar food, dubbed Mighty Wings. But the wings were apparently too spicy and too expensive for McDonald’s customers, according to Business Insider, so McDonald’s soon removed them from the menu.

Next: The Supersize menu

Anyone who visited a McDonald’s in the 1990’s remembers cashiers asking, “Would you like to Supersize your meal?” Even as the chain was introducing health-conscious items like the McLean Deluxe and salads, it was urging customers to add 410-calorie cups of soda and 610-calorie servings of fries to their Big Mac orders. That all changed after the release of the 2004 documentary Super Size Me, which chronicled filmmaker Morgan Spurlock’s month-long, McDonald’s-only diet. The fast-food chain scrapped the massive portions soon after.

You can blame environmentalism for the death of McDLT. This burger topped with lettuce and tomato was served in a special Styrofoam container. On one side was the hot bottom bun and hamburger patty, while on the other were the cool top bun, lettuce, and tomato. The idea was to “keep the hot side hot, and the cool side cool.” Once they got their sandwich, customers could put the two halves together. But once McDonald’s phased out its Styrofoam packaging in the 1990s, the sandwich was destined for extinction.

Next: The Arch Deluxe

Most people see McDonald’s as budget food, but that hasn’t stopped the chain from occasionally trying to class up its act. Case in point, the Arch Deluxe. This fancy sandwich, introduced in 1996, featured a quarter-pound of beef, plus bacon, lettuce, onions, cheese, and a secret sauce, all served on a bakery bun. McDonald’s supposedly invested $300 million in promoting the premium burgers (including a website with instructions for a “Deluxe line dance”), with the expectation that they might sell $1 billion worth of them in the first year. However, the attempt to go upscale epically failed, and the sandwich swiftly disappeared from the menu.

When it comes to McDonald’s food failures, there’s none more notorious than McPizza. Many hyped up the chain’s attempts to muscle in on Domino’s and Pizza Hut’s business in the late 1980s and early 1990s, but it went nowhere, partially because the pizzas took so long to cook. But the McPizza isn’t completely in the fast food graveyard. Two McDonald’s restaurants – one in Ohio and another in West Virginia – still serve the pies.