These Are the Most Beautiful University Libraries in America

Today’s college students don’t always study in the library. (After all, thanks to the internet, you can research any paper or project from a laptop in a messy dorm room!) But university libraries still reign as some of the most important and beautiful buildings on campus. Even if every book and manuscript gets digitized, it’s still inspiring to step into a gorgeous university library. Some of them showcase traditional architectural styles. Others exhibit a more modern aesthetic. Either way, you can’t help but feel a little awed when you walk into one of these imposing buildings.

Read on to check out our favorite candidates for the title of the most beautiful university library in the United States.

Baker and Rauner Libraries on the Dartmouth College Green | iStock.com/ErikaMitchell

Imposing but straightforward from the outside, the Baker-Berry Library at Dartmouth College has a lot more grandeur inside. Travel + Leisure reports that within those brick walls, you can admire a fresco by José Clemente Orozco. (Just head to the basement reading room in the original Baker section of the library to see Epic of American Civilization, a designated national historic landmark.) Or, stop in to the grand reading room and lounge in one of the wood and plush chairs that overlook the college green. Admire the Berry addition, completed in 2000. Or stop in to the adjacent Sanborn Library, where you can take part in the beloved tradition of tea and cookies in the afternoon.

The Bapst Library easily numbers among the most stunning university libraries thanks to its quintessentially Gothic architecture. Architectural Digest reports that the library features beautifully arched windows that let in ample natural light. The structure served as the college’s main library from 1925 until 1984. Since 1984, it has served as the art library with materials on art, architecture, museum studies, photography, art history, and film.

Yale University’s Beinecke Rare Book and Manuscript Library may not number among the oldest university libraries in the nation. However, it certainly houses one of the most impressive collections of rare and historic books and manuscripts. In fact, Beinecke numbers among the largest rare books libraries in the world. The structure, completed in 1963 by American architect Gordon Bunshaft, features a marble-lined interior. According to Architectural Digest, the marble enhances the minimal lighting, which helps prevent damage to the rare books, early manuscripts, and literary archives in Yale’s collection.

4. Bizzell Memorial Library at the University of Oklahoma

Architectural Digest nominates the Bizzell Memorial Library at the University of Oklahoma as one of the most stunning university libraries in the United States. The beautiful brick structure was designed by the firm Layton Hicks & Forsyth, and was designated a National Historic Landmark in 2001. The collegiate Gothic-style building includes a beautiful Great Reading Room, equally inspiring for students studying for exams and visitors admiring the gorgeous architecture.

5. Clark Library at the University of California, Los Angeles

The William Andrews Clark Memorial Library at UCLA is located across town from the rest of the campus on an historic property in the West Adams neighborhood of Los Angeles. But, without a doubt, it’s one of the most beautiful buildings at the university. Travel + Leisure notes that William Andrews Clark, Jr. donated the building to the university, in memory of his senator father. The brick building combines Italian and English architectural styles, and among its contents is the world’s largest collection of books by and about Oscar Wilde.

The William W. Cook Legal Research Library at the University of Michigan Law School showcases a beautiful English-Gothic style — perfect whether you need a place to hit the books or just want to admire some stunning architecture. The library is named for an attorney and legal scholar who left his entire estate to the Law School. The library opened after Cook’s death in 1930. Cook hadn’t wanted his name on any of the university’s buildings. But since he was no longer around to object, the Board of Regents named the new library after him. It has beautiful spires, a huge reading room, stained glass windows, and metal work by Samuel Yellin.

7. Fisher Fine Arts Library at the University of Pennsylvania

The Anne & Jerome Fisher Fine Arts Library at the University of Pennsylvania is quite a stunner. Also referred to as the Furness Library (in honor of its architect, Frank Furness), this university library features an intricate red exterior made of sandstone and brick — quite a departure from what was typical of university architecture at the time. The gorgeous building features towers, chimneys, skylighted rooms, and clerestory halls. Travel + Leisure notes that the library, which is designated a National Historic Place, also includes grand arches, plenty of natural light, and beautiful stone.

8. Fleet Library at the Rhode Island School of Design

As Travel + Leisure notes, this design school didn’t actually design its own library. Instead, the Fleet Library at the Rhode Island School of Design (RISD) is housed in the former Rhode Island Hospital Trust bank building. The expansive banking hall serves as the library’s main reading room and is flanked by beautiful pillars and a hanging clock that reminds many visitors of Grand Central Station. On the second floor, you’ll find a reading room for Archives and Special Collections, as well as the home of the Materials and Picture Collections. Above that, RISD has several floors of student housing.

Most people wouldn’t think that Baltimore has a building with one of the most beautiful interiors in the world, Travel + Leisure reports. However, that’s exactly what you get to see if you visit the George Peabody Library at Johns Hopkins University. This Neo-Greco masterpiece features a skylight, black and white marble, cast iron railings, and 300,000 volumes. The stack room has five tiers of ornamental cast-iron balconies, which rise one after another to the skylight 61 feet above the floor.

10. Harper Memorial Library at the University of Chicago

The University of Chicago’s William Rainey Harper Memorial Library takes its architectural cues from Cambridge and Oxford. It features two distinct towers that look similar but are actually unique. The west tower resembles one at King’s College at Cambridge. Its battlements symbolize the secular state, according to the university. The east tower resembles Christ Church College at Oxford and has Byzantine imagery. Together, they suggest “both the divine and secular realms.” Interestingly enough, this library doesn’t actually circulate any books. Instead, it functions as what Travel + Leisure calls “a wildly grand study space.” The vaulted reading room feels particularly magnificent.

If you prefer modern architecture to Gothic, you’ll want to stop by the Richard J. Klarchek Information Commons at Loyola University Chicago. Travel + Leisure reports that most people appreciate it not just for its architecture, but also for the extraordinary views you can enjoy inside, thanks to the building’s glass facade. Look up from your book (or laptop) and you’ll see a stunning panorama of Lake Michigan. TheLeadership in Energy and Environmental Design (LEED) Silver-certified building has many environmental features to reduce energy use, including a facade that manages the heat flow and ventilation throughout the year.

The Linderman Library at Lehigh University has beautiful wood floors, impressive half-rings of cast iron stacks, plus a stained glass skylight. Travel + Leisure counts the library as “one of the finest among smaller universities” and one of the most beautiful university libraries in the U.S. According to Architectural Digest, architect Addison Hutton modeled the library’s Venetian architecture after the British Museum in London. Since the library’s opening in 1878, the structure has undergone several renovations. But through all the years that have elapsed, its Victorian rotunda and Grand Reading Room have still retained all their historic magnificence.

13. Mansueto Library at the University of Chicago

The University of Chicago makes another great destination for visitors who want to see modern university libraries. Architectural Digest reports that the Joe and Rika Mansueto Library at the University of Chicago has won numerous design awards. Interestingly, architect Helmut Jahn incorporated solar-controlled glass overhead in the design of the building. In fact, the elliptical glass dome caps a 180-seat Grand Reading Room. Another impressive use of technology? The library uses robotic cranes to retrieve materials in record time. In fact, it takes an average of just three minutes for the system to find and retrieve a book.

14. Millikan Library at the California Institute of Technology 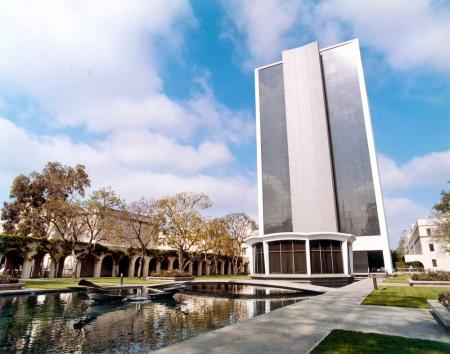 A much more modern addition to the ranks of the most beautiful university libraries, the Millikan Library at the California Institute of Technology will stun any fan of contemporary architecture. Architectural Digest reports that the building bears the name of Robert Andrews Millikan, a former professor at the school who won the Nobel Prize for Physics in 1923. The nine-story library features white concrete and South African black granite. It measures up as the tallest building on the university’s campus. However, the building now houses a print collection and offices for the library administration, while the bulk of the library’s collection resides in another building on campus.

According to Travel + Leisure, the Riggs Library at Georgetown University is one of only a few university libraries made largely of cast iron. It served as the main library for the university from 1891 to 1970, and was financed by E. Francis Riggs as a memorial to both his late father and to his brother, who had attended Georgetown. Though today it’s primarily used to host events, it still houses numerous books. Architect Paul Pelz, whose firm also designed the Library of Congress supervised the building’s construction, so it’s no surprise the Riggs Library became one of the most beautiful university libraries in the U.S.!

16. Suzzallo Library at the University of Washington 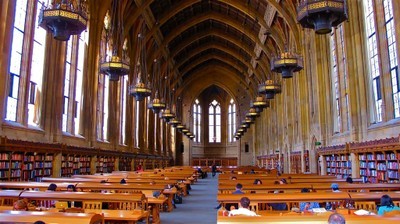 Travel + Leisure characterizes the entire University of Washington campus as underrated. But the Suzzallo Library is particularly beautiful. Like many other university libraries, it features stunning Gothic architecture and expansive study spaces. It also has a curving Grand Staircase that’s sure to impress any visitor. The collegiate Gothic style library was a top priority for university president Henry Suzzallo, who wanted a library that would serve as the “soul of the university.” Though Suzzallo became embroiled in political rivalries and controversies that resulted in his dismissal from the university, the library — still one of the most beautiful university libraries in America — was named for him following his death in 1933.

Cornell University’s Uris Library, one of the most beautiful university libraries in the United States, has a unique origin story. In fact, it was designed by the university’s very first architecture student, William Henry Miller. Andrew Dickson White, Cornell’s co-founder and first president, collaborated with Miller to design and ornament the space that would house his own personal library, which he donated to the university. The space originally had skylights and an open archway, but those features eventually disappeared in the process of renovations. However, you can still see the original three tiers of wrought-iron stacks.

Read More: The Most Beautiful College Campuses You Can Visit in the U.S.